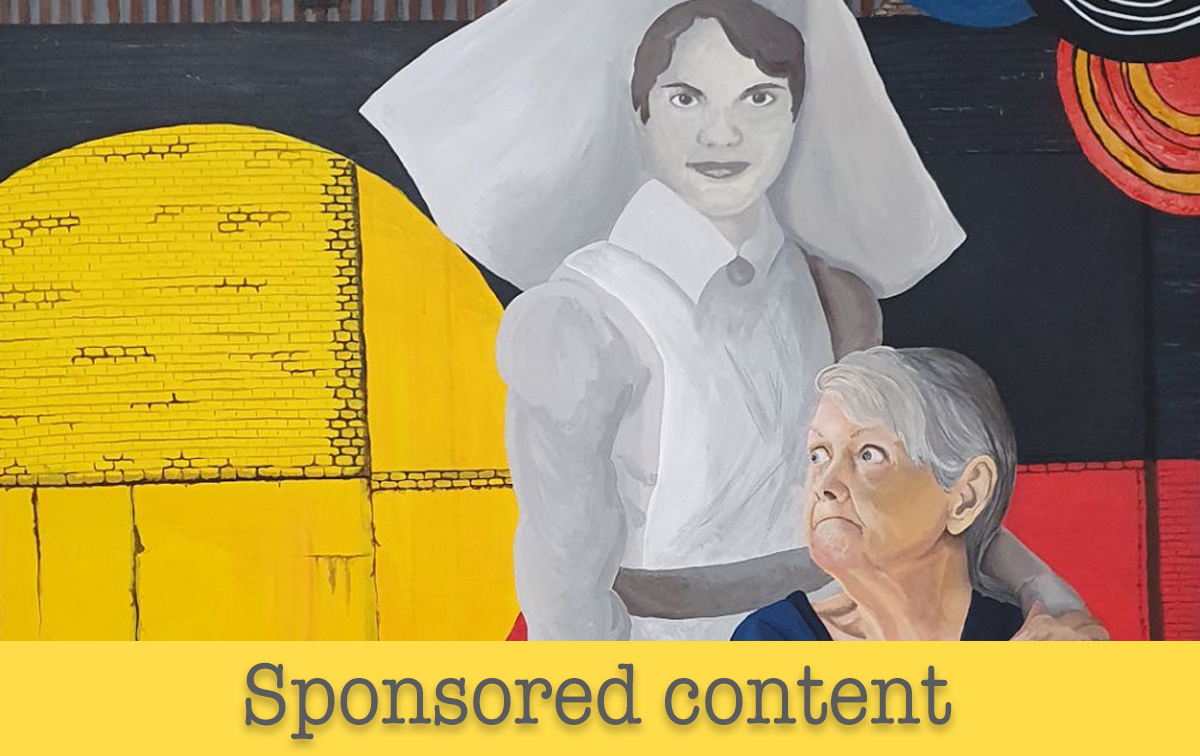 Introduction by Croakey: National Reconciliation Week, which starts on 27 May, is book-ended by two historical demonstrations of activism by Aboriginal and Torres Strait Islander peoples – the 1967 Referendum and the Mabo High Court decision of 1992.

The Congress of Aboriginal and Torres Strait Islander Nurses and Midwives (CATSINaM) was established 26 years after AMS Redfern opened its doors to provide free healthcare for Aboriginal people.

Aboriginal and Torres Strait Islander nurses and midwives have been at the forefront of establishing Aboriginal Community Controlled Health Organisations and delivering comprehensive primary healthcare rooted in self-determination.

This article is published by Croakey Professional Services as sponsored content as part of a series celebrating CATSINAM’s 25-year history of collective and individual activism. See the campaign portal.

Aboriginal and/or Torres Strait Islander readers are advised this article includes the names of deceased people.

Within a year of opening, the AMS was so popular it could not meet the demand for its services. In 1972, it gained Federal Government funding to eventually expand from a shopfront into a multidisciplinary health service.

Like AMS Redfern, the Congress of Aboriginal and Torres Strait Islander Nurses and Midwives (CATSINaM) was established to provide a voice for Indigenous nurses and midwives to address racism in the health system.

It was Australia’s first Aboriginal Community Controlled Health Organisation and Dulcie Flower was the first Torres Strait Islander nurse to work there.

Clinics were held after working hours, from 6pm to 10pm, and all staff were initially unpaid. Hospitals, doctors, university students and community members donated medical equipment and medicines, beds, office supplies, fresh food and money to pay the rent.

“We were part of a process where our people could become who they really were. And we could provide a holistic health service with Aboriginal and Torres Strait Islander peoples rather than for them,” Auntie Dulcie said. 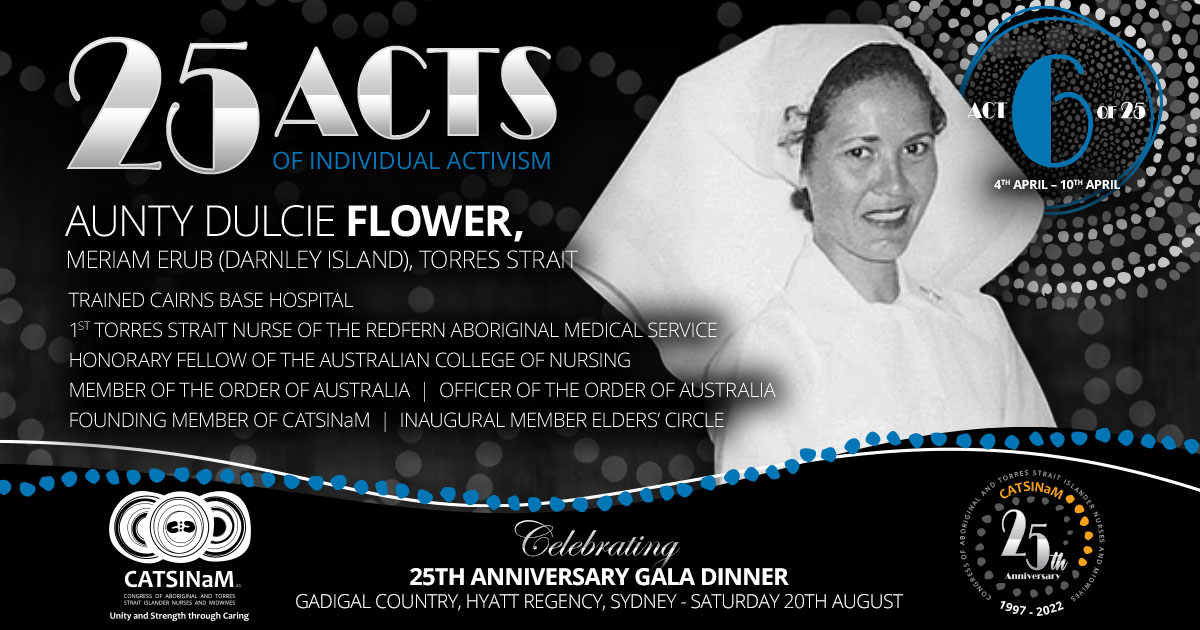 When Dulcie Flower arrived in Sydney from Cairns in the 1960s there were just three Indigenous nurses at the teaching hospital where she worked. She became an activist with the Aboriginal Progressive Association and the Federal Council for the Advancement of Aborigines and Torres Strait Islanders, campaigning for constitutional change for Indigenous peoples in the 1967 Referendum and fighting for health equity, equal pay and land rights.

She said the establishment of AMS Redfern was an extension of Indigenous activism, which included the long campaign towards the 1967 referendum and increasing protests by Aboriginal people against restrictive and racist laws, government land grabs, and police harassment and brutality.

“It was a climate that had gathered impetus from the 1960s and involved so many Indigenous and non-Indigenous peoples committed to improving the lives of Aboriginal and Torres Strait Islander peoples,” Auntie Dulcie said.

Aboriginal and Torres Strait Islander nurses were involved in the development of the ACCHO sector. CATSINaM’s founder Dr Sally Goold, a Wiradjuri woman, was the first Aboriginal Registered Nurse at Redfern AMS and was succeeded by Walmajarri nurse Jilpia Nappaljari Jones.

In the CATSINaM publication, In Our Own Right: Black Australian Nurses’ Stories, Jilpia Nappaljari Jones, who passed in 2021, described the significance of the AMS: “Nursing at the AMS provided me with a sense of the social and political history of my people, as well as being part of a new beginning of making choices and being in control of all that we do.”

She recalled the pride of working in the AMS and being addressed as ‘Sister’.

“This was a time when our Indigenous Australians had none of the titles that came later, like Doctor and Professor,” she wrote.

CATSINaM Chief Executive Officer Professor Roianne West, a Kalkadoon and Djunke woman, said so many of the Indigenous nurses and midwives who pioneered the community controlled model of care had a lifelong commitment to improving Aboriginal and Torres Strait Islander health and embedding cultural safety in nursing training and practice.

“When you look at these trailblazing nurses and midwives they went on to become Doctors and Professors in academia, establish ACCHOs in their communities, be awarded international and national honours, and take on leadership roles in universities and health departments,” she said.

From a modest shopfront in Redfern half a century ago, there are now 144 ACCHOs in Australia and the sector is the third largest employer of Aboriginal and Torres Strait Islander peoples.

“Our ACCHOs are more than just another health service. They put Aboriginal health in Aboriginal hands,” she told CATSINaM’s Back to the Fire conference last year.

“As the health system becomes more complex, the role of our services becomes even more critical. The Aboriginal and Torres Strait Islander population is increasing rapidly and funding levels have not kept pace with demand.”

These funding shortfalls are widespread across the Aboriginal and Torres Strait Islander nursing and midwifery workforce, according to CATSINaM CEO Professor Roianne West.

A report for CATSINaM by Dr Katrina Alford in 2015 predicted a national shortage of 100,000 nurses by 2030 and estimated that an additional 2,172 Indigenous nurses and midwives were required each year to reach population parity.

“The task is huge and requires urgent action. The under-supply of the Aboriginal and Torres Strait Islander nursing and midwifery workforce has been a persistent and long-term problem in Australia,” Professor West said.

“We are developing a second edition of the report, ‘gettin em n keepin em’, and privileging Aboriginal and Torres Strait Islander nurses’ and midwives’ stories with an updated edition of ‘In Our Own Right: Black Australian Nurses’ and Midwives’ Stories’ as critical strategies to addressing this issue.”

At the 2016 Census, Aboriginal and Torres Strait Islander peoples represented 1.8 percent of the health workforce, despite accounting for 3.3 percent of the Australian population. In nursing and midwifery in 2020, Indigenous nurses and midwives made up 1.32 percent of the workforce of 418,349 people.

The trust of patients

“Our people will go to their ACCHO and tell their doctor about all of their concerns because the trust is there. The trust is not in the legal institution,” she said in an interview last year with the National Indigenous Times.

This trust is a defining feature of the ACCHO philosophy, according to Auntie Dulcie Flower. She said community nursing and midwifery in ACCHOs was very different to other hierarchical health settings such as hospitals where many staff trained.

“The governance of the organisations means everyone is on equal terms – the board of directors, the Aboriginal health workers, the cleaners, the drivers, and the patients,” she said. “Patients have a huge input because they are always consulted.”

NACCHO CEO Aunty Pat Turner said Aboriginal and Torres Strait Islander nurses and midwives were often the first people to address the healing of many Indigenous peoples who accessed health and wellbeing services at ACCHOs.

“Our people are on a healing journey. The impact of intergenerational trauma beginning with colonisation continues to result, for some of our people, in disconnection from family and culture,” she said.

ACCHOs have also played a significant role in training the Indigenous health workforce. Auntie Dulcie Flower started an Aboriginal health workers course at AMS Redfern in 1984, influenced by the work of the Victorian Aboriginal Community Controlled Health Organisation, which was followed by training in mental healthcare. AMS Redfern psychiatric nurse Pat Delaney was influential in Indigenous mental health, counselling and advocating in clinics and communities and convened the first national conference for Aboriginal mental health.

Auntie Dulcie Flower said AMS Redfern became a centre for education and mentoring for the growing ACCHO sector under the leadership of Dr Naomi Mayers, a Yorta Yorta nurse who joined AMS Redfern in 1972 as a receptionist and eventually became Chief Executive Officer and Company Secretary. She developed the registered company co-operative infrastructure and assisted many communities to establish their own ACCHOs.

Over in Western Australia, Nyoongar and Martujarra nurse Joan Winch started working with the Perth Aboriginal Medical Service in 1975 and established the Marr Mooditj Training Aboriginal Corporation for Aboriginal healthcare workers in 1983.

The organisation was awarded the prestigious World Health Organization Sasakawa Award for Primary Health Care Work in 1987. Emeritus Professor Aunty Joan Winch achieved her PhD at the age of 76 after a distinguished academic career at Curtin University. She passed away in March this year.

In Queensland, Kuku Yalanji nurse and midwife Aunty Pam Mam helped establish the Brisbane Aboriginal and Torres Strait Islander Community Health Service in 1983, now one of the largest ACCHOs in Australia. NACCHO Chair Donella Mills paid tribute to Aunty Pam on her passing in 2020: “Aunty Pam championed proper care for our people, based on respect, humility and cultural understanding.”

Aunty Mary said in an interview last year that Aboriginal and Torres Strait Islander peoples recognised the Brisbane ACCHO “as their own”.

“You can go there and get treated fairly and equally, knowing that you’re reflected in those services,” she said.

This article was funded by CATSINaM and edited by Professor Roianne West. It was written on behalf of Croakey Professional Services by Linda Doherty, and also edited by Dr Tess Ryan and Dr Melissa Sweet.

PrevPreviousThe benefits are so profound, how can we get the health sector moving on this important intervention?
NextAlbanese Government urged to seize the opportunity for meaningful health reformNext