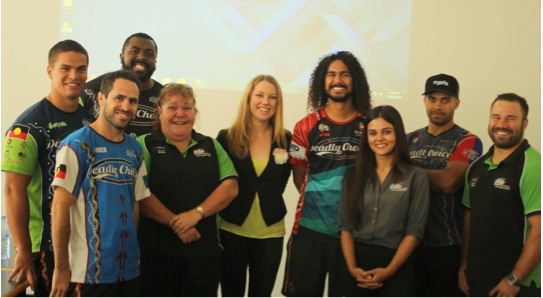 It is timely, with the 15th World Congress on Public Health underway in Melbourne this week, to reflect upon the historic and ongoing role of health promotion in colonising practices that are harmful to Aboriginal and Torres Strait Islander people.

In the article below, published as part of the Acknowledgement series, Dr Karen McPhail-Bell urges the field of health promotion to acknowledge its complicity with colonising practices.

“It is time for health promotion to acknowledge its colonial basis and associated harms,” she writes below.

McPhail-Bell’s call comes as nursing and midwifery professions consider whether to follow the lead of the Australian Psychological Society in making an apology to Aboriginal and Torres Strait Islander people.

The Acknowledgement series will be made freely available as an e-publication in coming weeks. It will be discussed tomorrow morning at a Roundtable Meeting hosted by the Australian Psychological Society in Melbourne, and in a presentation on Thursday afternoon to the World Congress, Taking action to acknowledge the health system’s role in colonisation: for healing, health and wellbeing.

Instead, I would like to highlight that these statistics provide another kind of evidence; that is, the lack of effective action to address Indigenous health disadvantage, including general failure to engage with the social, historical, political context of Indigenous Australians on their terms.

In this article, I call for acknowledgement of and apology for health promotion’s continued use as an apparatus of colonial control over Indigenous Australians, and make suggestions for ways to do things differently.

However, the majority of mainstream health promotion has shown little impact upon the burden of disease in Indigenous communities, and generally not enabled Indigenous Australians to take control of their lives.

Why is it that the general health promotion profession – with some exceptions (e.g. Bond et al, Brough et al, Fredericks & Anderson,  and Pyett et al) – has generally not queried its own failure with Indigenous Australians? To understand contemporary health promotion, we must seek to understand its historical basis in colonisation and silencing Indigenous voices.

In Australia, colonisation began with British imperialism to establish British control over land, involving many inhumane strategies that continue to profoundly impact Indigenous health  and cause disadvantage.

Australia’s health system, including health promotion practice and policy, is heavily implicated in these damaging colonising practices, as many have written about (for example Mohamed, Sweet al al, Bond, Thomas, Bartlett, and Brough).

Consider that while Indigenous Australians were experiencing their first access to appropriate health care through the Aboriginal community controlled health service (ACCHS) movement, the first International Conference on Health Promotion was held in Ottawa in 1986.

At the conference, there were only two people present as ‘Indigenous representation’: an Indigenous consultant from the First Nations Confederacy in Manitoba, Canada; and a participant from Research and Development in Health and Welfare Canada who referenced Indigeneity in their professional background.

This representation, and the conference focus on wealthy countries, is a substantial shift away from the globally inclusive agenda promoted by the Ottawa Charter for Health Promotion, yet remains largely unacknowledged within the health promotion literature.

As my colleagues and I discuss here, the Ottawa Charter’s development reflects that health promotion is not culturally neutral, as is so often assumed, but that particular voices, knowledges and expertise are valued over others.

Despite its social justice and human rights orientations, health promotion has been largely absent from the advocacy efforts for Indigenous health and wellbeing in Australia (see Table).

For instance, in the same year that the fourth international health promotion conference produced the Jakarta Declaration on Leading Health Promotion into the 21st Century, the Bringing Them Home Report was tabled in Australia’s Federal Parliament. Bringing Them Home was hugely significant for bringing the stories of “gross violation… of human rights” of the Stolen Generation into the public consciousness and for its recommendations.

However, (then) Prime Minister John Howard opposed the Report’s recommendations and defended his refusal to apologise on behalf of Australia to the Stolen Generations. The reconciliation process was subsequently critiqued for being symbolic, without the dialogue needed between Indigenous and non-Indigenous parties.

During the Bangkok Charter for Health Promotion’s development, the Howard Government abolished the Aboriginal and Torres Strait Islander Commission (ATSIC). Previously in 1990, the Hawke Government established ATSIC as a step towards Indigenous self-determination, which is critical for Indigenous health promotion.

In contrast, John Howard announced that ATSIC demonstrated that self-determination was a failed “experiment”. The struggle of Indigenous Australians to control their own health continued without visible support from the health promotion profession.

Subsequently the NHMRC reviewed infrastructure support for Australia’s health advancement. The review included a component focused on Indigenous health promotion projects and infrastructure, to “listen to what Indigenous people of this country have to say about what is needed to advance their future health”.

As my colleagues and I have discussed, colonial agendas of control over Indigenous Australians and their behaviours continue through contemporary health promotion practice.

The positioning of Indigenous identity as a deficiency is one way that health promotion’s moral agenda of health advancement justifies intervention.

As a health promotion profession, we must acknowledge that in an Indigenous context, our practice can convey more than healthy lifestyle messages; we also impart a message about colonial relationships of power and control, and colonial imaginings of the deficiencies of Indigenous people.

The good news is that there are Indigenous-led examples of health promotion from which we can learn. One such example is Deadly Choices.

During my doctoral studies, I partnered with Deadly Choices to learn about its practitioners’ approach to health promotion. Established by the Institute for Urban Indigenous Health, Deadly Choices aims to empower Aboriginal and Torres Strait Islander people to make healthy choices for themselves and their families.

Community choice and control are central to Deadly Choices’ practice. The value they place upon not forcing change contrasts the usual colonial exertions by health promotion regarding compliance and control.

A comment by a Deadly Choices community member on the Deadly Choices Facebook page exposes the importance of identity for Indigenous health promotion:

Being Aboriginal means everything to me… the connection I have with my people and my country is something money cannot buy.”

Deadly Choices creates space to celebrate and recognise Indigenous agency, cultural values and identity. This is illustrated by Deadly Choices’ showcasing of Indigenous leadership in the profiling of Deadly Choices ambassadors and promotion of people’s deadly choices, such as on social networking sites.

Deadly Choices’ positive framing of Indigenous identity is remarkable for a health program when considering the public health tendency to position Indigenous Australians as sick and dying, lacking in agency to improve their own health.

A decolonising approach can guide both Indigenous and non-Indigenous researchers and practitioners to develop strategies for devolving or sharing power with the participating communities. Our values and morals are not detached from our practice and research; our positioning informs our research goals and approach. Awareness of our positioning is critical for health promotion professionals. This awareness will not dissolve the tensions or biases inherent to our positioning but rather, will help to reveal the terrain to respectfully traverse together.

What can mainstream health promotion do?

That Indigenous Australians continue the struggle for control over their health affairs today is a central issue for health promotion.

As both a moral and pragmatic endeavour, health promotion must include a more explicit discussion of power. It is time for health promotion to acknowledge its colonial basis and associated harms. An apology is one way to manifest this acknowledgement.

The Australian Psychological Society provides an example of how an apology could proceed. As the CATSINaM CEO, Janine Mohamed reminds us, “such apologies are worth doing… for any health profession that is preparing to acknowledge their complicity with racist and colonising theories and practices”.

The institutions of health promotion must acknowledge our role in ongoing processes of colonial control.

• Dr Karen McPhail-Bell is a non-Indigenous early career academic and public health professional at the University Centre for Rural Health. Her interest lies in the operation of power in relation to people’s health, and in strengths-based and reciprocal processes to support of community-controlled and Indigenous-led agendas. She has 15 years policy, research and program experience across academic, government and non-government sectors in Australia and internationally.

• Disclaimer: The author uses the term Indigenous Australians to refer to Aboriginal and Torres Strait Islander people and recognises there is wide diversity. The title for this article refers to ‘The Great Australian Silence’, a term coined by W. E. H. Stanner in his 1968 ABC Boyer Lecture. The views and opinions expressed in this post are those of the author and do not necessarily reflect the views and opinions of the Institute for Urban Indigenous Health or its staff and member services. The author is not employed by IUIH.

• Acknowledgement: The author acknowledges and thanks Deadly Choices and the Institute for Urban Indigenous Health for their ongoing support and generosity, particularly to Ian Lacey and Keiron Lander for discussing this piece. I also acknowledge my three PhD supervisors: Associate Professor Mark Brough, Dr Chelsea Bond and Professor Bronwyn Fredericks, and the many critical friends and mentors who have shaped the way I view health promotion. Thanks also to Dr Sophie Hickey for her comments on earlier version of this piece.