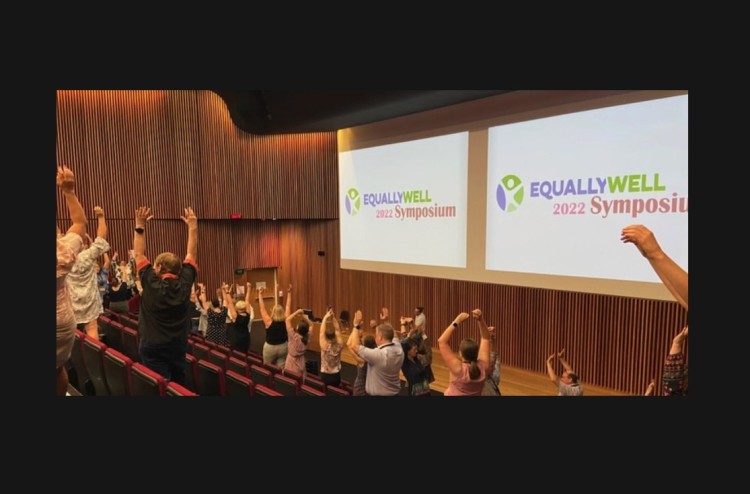 The important and evolving role of peer workers in mental healthcare, lessons learnt from COVID-19, and the urgent need to improve care for people with mental illness were among some of the topics covered at the Equally Well 2022 Symposium, reports Cate Carrigan for the Croakey Conference News Service.

Underlying health susceptibilities coupled with medically-induced weight gain are creating a ‘ticking time bomb’ of health risks for people with schizophrenia spectrum disorders, a conference on the physical health of people with mental illness has been told.

Professor David Castle, scientific director of the Centre for Complex Interventions at the Centre for Addictions and Mental Health (CAMH) at the University of Toronto, told the Equally Well 2022 Symposium that a united effort was needed to tackle the issue, and that peer workers could be central to this.

A keynote speaker at the two-day symposium, being held on the lands of the Yugambeh and Kombumerri peoples at Griffith University, Castle deplored the “appalling inconsistencies” in the provision of care to people with mental health problems.

Individuals with schizophrenia spectrum disorders are disproportionately affected by chronic diseases and physical health problems – such as cardiovascular disease (CVD), obesity, diabetes and hypertension – due to a combination of lifestyle, physiological, and social factors, shortening their life expectancy by 10-25 years, he told the two-day gathering.

People with schizophrenia are at higher risk of chronic metabolic disorders, said Castle, adding that some antipsychotics have a large metabolic footprint, resulting in increased weight gain (and waist circumference), a key risk factor for CVD.

He cited an Australian study that found weight gain happens very early on for those with schizophrenia – even in their teens – when they may have their first episode of psychosis. 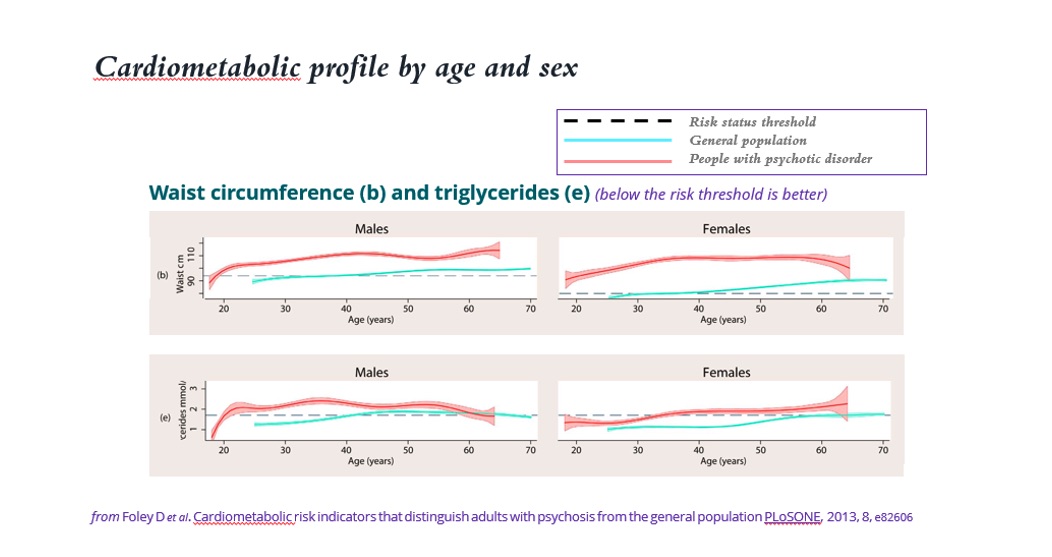 “So, we have a ticking time bomb …. that we need to get in and defuse,” Castle said.

“One of the things we should not do is use medications that are going to exacerbate the problem.”

It wasn’t a matter of saying who should or shouldn’t be on certain medications, but it was a matter of ensuring there was informed, and personal choice and that the physician need to be upfront, he said.

“The only way to tackle this is with clinicians of all persuasions working with patients and carers to address the “really appalling inconsistencies in the way the care is both provided to and received by patients with mental health problems”, he said. 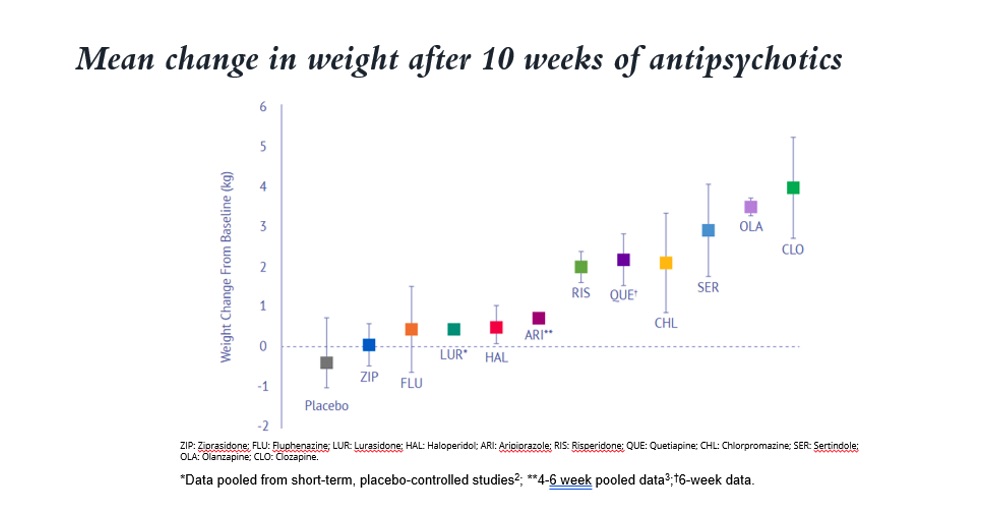 Castle called for a larger role for peer workers, saying he had been privileged to be part of workshops in Australia where there was a strong desire for more peer worker involvement.

These are workers with “experience of mental health issues and metabolic health issues”, and their involvement boosted motivation, social support, feelings of control and engagement with health services.

But he said more research was needed to prove the cost-effectiveness of such interventions and that the CAHM was working to co-design a trial to measure the long-term improvement in targeted physical health outcomes.

The trial – which is currently in co-design phase and will be implemented in the next couple of months – will involve two part-time appropriately trained individuals with lived experience to act as peer facilitators working closely with the research team to create and plan the intervention.

“We are looking at the peers working alongside clinicians to deliver group-based interventions every week and also to do one-to-one follow-ups to ensure they are on track, and addressing any barriers as they arise,” he said.

Castle said it was critical that any peer workers be properly trained and supported, and that any impact of the work on their own physical and mental health must be monitored.

“Something I have seen in my clinical practice is this engagement and human connection can really break the ice in regards to these sorts of care packages,” he said.

The importance of peer workers was also highlighted by Mental Health Peer Coordinator at COORDINARE, South Eastern NSW PHN, Tim Heffernan, who described the peer workforce as the “renewable resource” of the mental health system.

“The traditional workforces are the fossil fuels that sustain the biomedical model,” he told delegates.

“Things are obviously worsening in this system, but as with climate change, there are significant vested interests whose survival depends on maintaining the status quo, regardless of the damage done.” 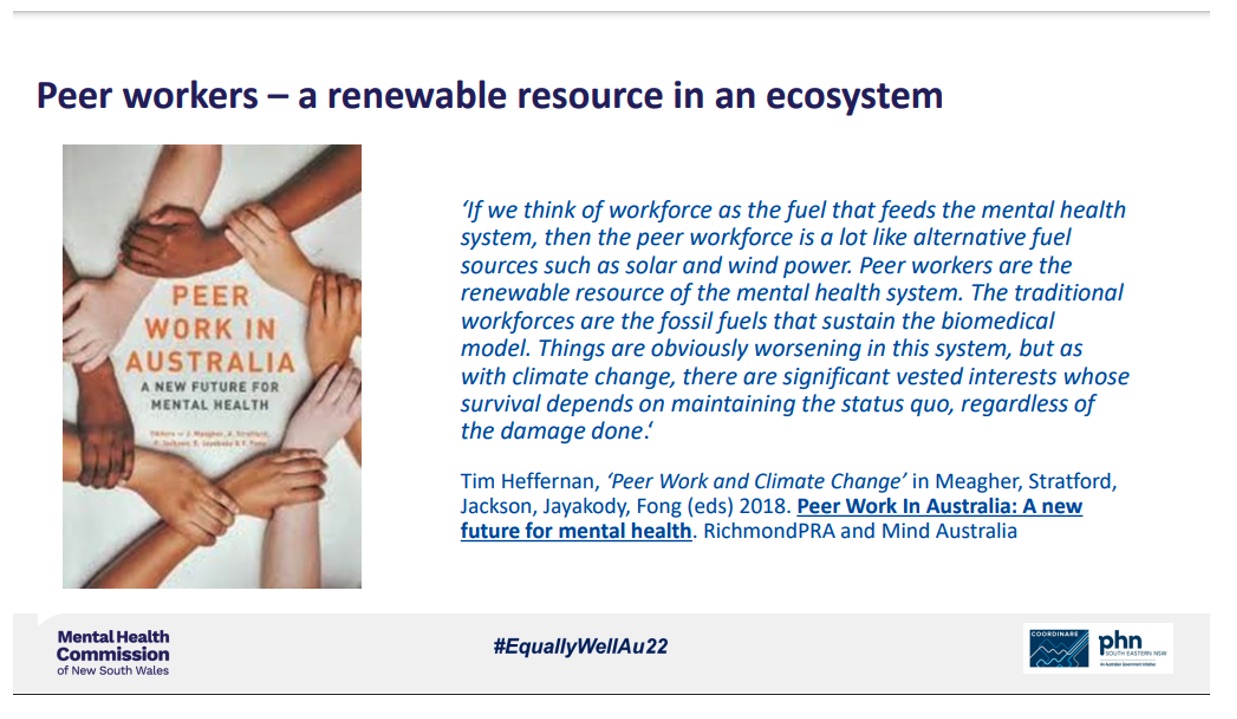 Heffernan, Deputy Commissioner with the NSW Mental Health Commission, who has over thirty years of lived experience of mental illness, said while there are good people working across mental health, “we have reached a point where we need new inputs”.

“We need inputs from people who want to help themselves, who want to re-frame their lives from deficit, deficiency and shame, to one of being productive, joyous and happy,” he said.

Heffernan recalled advice relayed by a consumer in a NSW mental health unit that: “You don’t go to the doctor when you are unwell, you go to someone who has recovered from the sickness”.

Investment in peer workers was ‘a must’ and needed to be framed as an urgent human rights and social justice issue. It wasn’t about money – it was about investing in people, he said.

It was about “sharing experiences of recovery, ill-health and getting the vibe back”.

“We have a right to these things because they work. These are the things that keep us physically well yet a lot of the treatment I had as a young man was coercive – it was under the Mental Health Act and I never wanted to go back to hospital,” he said.

In pressing the case for the involvement of more peer workers, Heffernan said: “Most of us want agency in our lives, not agencies in our lives”.

Peer work – despite all the discussion about it – remained a very small part of the mental health workforce, was fragmented and forced to try to fit into often hostile systems.

Heffernan spoke of the evolving role of peer workers, saying when he’d first been employed in such a role he was told “not to talk about medication” with consumers but now the World Health Organization (WHO) had countered such misconceptions, stating that ‘peer-to-peer discussions should not be limited to light topics’.

The WHO document goes on to say peer workers are in an ideal position to use their own personal experiences to talk about complex and distressing issues, such as the benefits and negative effects of medication.

In his opening address to the Symposium, Co-Chair of Equally Well and Ramsay Health Care Professor of Psychiatry Malcolm Hopwood spoke of progress in the Equally Well movement over the last five years.

Hopwood said the 2017 Equally Well Consensus Statement of the Mental Health Commission had outlined the need to address the poor physical health of those with mental illness, which significantly reduced their longevity.

The costs of these premature deaths were highlighted in a 2016 Mitchell Institute and Royal Australian and New Zealand College of Psychiatrists study that found the early death of those with severe mental illness was costing Australia $15 billion a year, he said.

Hopwood said central to the initial statement was putting in place a holistic, person-centred approach and there had been consensus that the best way to do this was through adapting/improving existing services rather than creating something new.

Since then, Hopwood was pleased to see a cascade of policies and EW principles being recognised nationally in a number of ways, including in the Productivity Commission Report on mental health, which raised physical health comorbidities as a key issue.

A marker of success of the EW movement is to see initiatives permeating widely, he said.

“I personally feel very proud to be part of an organisation that’s managed to collect people from across the sector in a way that doesn’t always happen in mental health,” he said.

The National Director of Equally Well Australia, Professor Russell Roberts spoke on the lessons learnt from the COVID-19 outbreak, saying people with mental illness were more vulnerable: they were more likely to become infected, suffer serious illness, be hospitalised and die from the virus.

What has happened with COVID-19 is just a reflection of the overall issue of the poor physical health of those with mental illness, said Roberts.

One positive message from the pandemic was that prevention – in the form of vaccination and other public health measures to counter the virus – works.

Roberts used discussion of vaccination to highlight the fact that people with mental health issues are six times more likely to be hospitalised for the common flu than other people in the community.

A flu vaccination that cost just $60 could save a hospital admission costing $2000 a night, he said yet many healthcare providers fail to ask mental health patients about their immunisation status.

Roberts added that 16 people with mental illness die every day from a cancer that could have been effectively treated had they been sent for screening.

While EW-informed policies were being put in place, Roberts said there was still much work to do:

It’s great to have the policy but that’s just a platform to do something.

Where are the resources? How are we going to do it and coordinate it? All of these things need to happen and it needs to be person-centred not service-centred.

Mental health and primary health services are foreign lands. They are there for the convenience of the service providers – but we need to go to the territory where consumers are comfortable.”

Roberts said COVID taught health service providers to reach out to the marginalised or they won’t access services and that providers need to be creative and flexible.

Praising those working to implement EW changes, Roberts said all involved are doing a “grand thing” – something variously defined as magnificent, imposing in size, dignified and generational.

“What we are doing is a grand thing. This is a massive issue that we are tackling,” he said.

“We are talking 23,000 people per annum who die prematurely, at least half – maybe more – of those deaths are preventable.”

Every time we make a difference we change a life, said Roberts, giving the example of a health worker applying EW principles in checking the physical health of a woman with long-term mental illness who was losing her hair.

After ten years of chronic disease, and being seen by mental health services, it turned out “she was malnourished”.

A small team changed her life around by referring her to a dietician. “One life with a family and sibling and parents – transformed by that action of an EW practitioner.

“We are doing thousands of these interventions every day. We’re having a grand impact. This is a grand, a dignified thing we are doing,” he said. 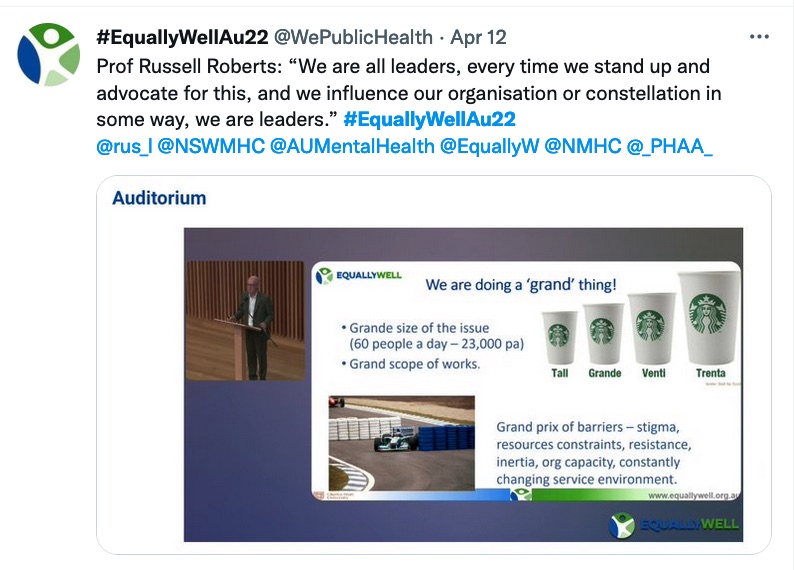 The Croakey Conference News Service will publish further reports and also some of the Twitter coverage from the Equally Well Symposium, including the launch of a Lived Experience Australia report on consumer and carer interaction with the healthcare system.

See Croakey’s archive of stories on mental health and wellbeing