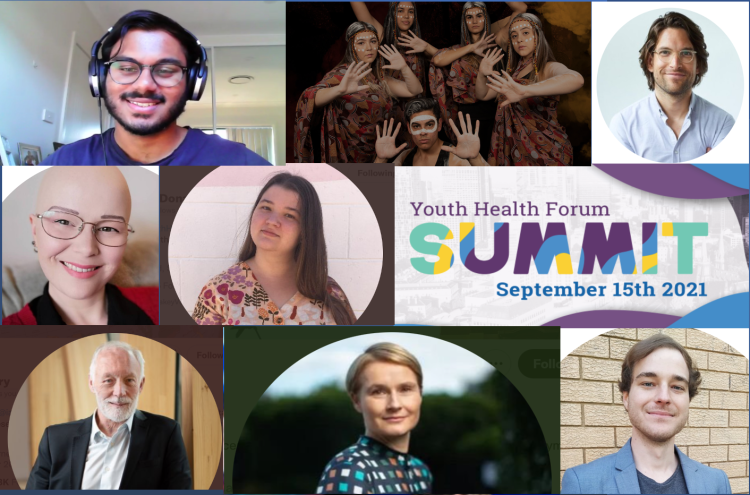 Introduction by Croakey: Young people in Australia have been leading the march for change on urgent issues like climate action and women’s safety but, despite their lives having been turned upside down by the COVID-19 pandemic, many feel they have been blamed more than heard.

That’s the backdrop for this week’s Youth Health Forum National Summit, being hosted by the Consumers Health Forum of Australia on Wednesday 15 September.

The one day event aims to create a platform for young people to develop an ambitious communique with a set of prescriptions for profound policy change, and will be asking:

Croakey journalist Marie McInerney will cover the event for the Croakey Conference News Service, and will live tweet #YHFSummit from the @WePublicHealth account. Bookmark this link to see earlier related stories and ongoing coverage here.

There were headlines galore on the meeting on COVID-19 from the Group of Seven (G7) in the United Kingdom in June on COVID-19 and the climate crisis but not so many for the accompanying Youth 7 summit, held to highlight the most pressing issues affecting young people.

The Y7 issued its own communique, “Making Waves for Future Generations”, looking at the necessary steps “to build equitable and robust healthcare systems, ensure the safety and success of young people online, leave no person or country behind, and safeguard our planet”.

And it called on world leaders to better involve young people in decision making, and to actively consider the long-term implications of decisions made today on the young people of tomorrow, talking about the critical need to “achieve a world fit for future generations”.

It’s a call set to be echoed at this week’s Youth Health Forum National Summit, hosted by the Consumer Health Forum (CHF), which will be looking for prescriptions – big and small, immediate and long-term –— to policy issues affecting young people amid the disruption and distress of COVID-19.

Among many options up for discussion will be the Well-being of Future Generations Act proclaimed by Wales that requires all public bodies “to think about the long-term impact of their decisions, to work better with people, communities and each other, and to prevent persistent problems such as poverty, health inequalities and climate change”.

To focus that work, Wales has the world’s only Future Generations Commissioner, who is a self-declared “guardian of future generations”.

The Lancet this month also published an article from members of the Global Youth Coalition championing Vaccines For All reporting that, “although not often highlighted, youth have had an important role in COVID-19 response efforts during the pandemic” and pointing to the Youth Recovery Plan developed for the World Economic Forum’s Davos TaskForce.

Compare all that to the Federal Government’s 2021 Intergenerational Report, released this year in the midst of the pandemic, which to the frustration of critics “made little comment on young Australians, beyond noting they make up a smaller proportion of the population than ever before”.

A seat at the table

A lack of focus in Australia on young people and their future is not news to emerging young Australian health leaders like Jahin Tanvir, a member of the CHF’s Youth Health Forum, who says so much of what passes for consultation with young people in Australia health and social policy is “quite tokenistic”.

That’s at the best of times, he says, much less in the pandemic where there have been few avenues for young people to contribute to policy.

Instead, he says they are constantly seeing themselves “blamed” for the outbreak, over lockdown compliance and vaccination rates, while experts, young and old, warn of the impacts of a “shadow pandemic” in mental health.

“What we really want is a seat at the table,” Tanvir told Croakey ahead of this week’s #YHFSummit, where he will lead discussions on emerging issues, including the final session where ideas and issues generated through the day will be collated to drive the next set of YHF recommendations and priorities.

A Futures Commissioner for Australia?

The Summit, which will raise the possibility of a Futures Commissioner for Australia, will feature young leaders like Caitlin Figueiredo, co-chair of the Australian Youth Coalition and co-founder of the Girls Takeover Parliament initiative and UNICEF Young Ambassador Franklin Hooper, a youth worker, mental health and LGBTQIA+ advocate.

Other leaders from the Youth Health Forum, including Roxxanne MacDonald, Georgia Gardner, Zinab Al Hilaly and Jasmine Elliot will be part of a range of exploratory conversations and activities, including a series of Lightning Youth Talks (modelled on TED Talks), presenting initiatives from across Australia.

They will be joined by not so young health leaders such as mental health expert Professor Patrick McGorry and VicHealth CEO Dr Sandro Demaio, who recently announced a partnership with seven youth organisations, “to put young people at the centre of health solutions during and beyond the coronavirus pandemic”.

Elliott and Al Hilaly will lead a conversation on ‘Young People as Change Makers’ with McGorry, Executive Director of Orygen, and Associate Professor Michelle Telfer, paediatrician and adolescent medicine physician, who recently took on The Australian over its unfair and harmful coverage of gender affirming healthcare and transgender children and teenagers.

Catania says the event has many aims, including bringing young people together, building their skills for advocacy, and developing a strong policy agenda ahead of the next federal election.

Tanvir, who migrated as a child with his family to Australia from Bangladesh is now a third year optometry student at the ANU. He has seen how a strong focus on co-design and leadership from young people can produce lasting policy change.

As well as being a member of the Youth Health Forum, Tanvir was also one of 20 young people from western Sydney appointed to be inaugural research commissioners at the Wellbeing Health & Youth Centre, a network of researchers who champion adolescent health, set up by National Health and Medical Research Council (NHMRC).

The goal of the WH&Y Commission is to ensure adolescent health research and policymaking are guided by young people like Tanvir. He says it did strong work last year on telehealth and how best to provide or promote access for young people.

But now Tanvir is living on the frontline of the pandemic with his family in south-west Sydney, deep in the so-called local government areas of concern in the COVID-19 outbreak, and subject to the strictest lockdown measures in the state.

He describes the impact and implications of the pandemic for young people in his region as “overwhelming” and one reason that mental health will be a major theme at this week’s summit.

“People’s mental health is being destroyed, people are having breakdowns and the uncertainty of the future is a major concern,” he said.

It last week urged the reintroduction of the Coronavirus 2021 Supplement for Youth Allowance and JobSeeker and of JobKeeper for business, saying Australia’s young people are experiencing “a new peak in the national mental health crisis, driven by the COVID-19 pandemic and ongoing lockdowns”.

Young people, who are more vulnerable to unemployment, casual and insecure work and have limited savings to fall back on, are not receiving the economic support they need to help limit mental distress and escalating mental health crisis.”

While clearly many young Australians are among the record numbers seeking mental health support, Tanvir’s worry is that some, including those among asylum seeker and refugee communities, may be “suffering in silence”, amid ongoing stigma around mental health.

And, as his Youth Health Forum colleague Jasmine Elliot outlined at Croakey last week, even when there is greater support announced, it too often misses the mark for young people who face additional barriers of access, including often being unable to meet out of pocket costs.

Change that will make a difference

CHF CEO Leanne Wells observes that COVID-19 has clearly been a big disruption for everyone, but young people in particular have been “affected profoundly”.

Despite that, to her knowledge, there has been no avenue where young people have been approached directly by governments on critical policy areas, leading as a result to strategies that have too often overlooked them, such as vaccine availability, or been less than optimal, such as in mental health supports and Job Seeker, “which was good but a very blunt instrument”.

Wells can’t see why Australia should and could not have a Futures Commissioner like Wales, given that all our major policy challenges – climate change, mental health, health and disability reform and beyond –— need to bring in “the voices of the future generations”.

This is not just because of the impact on them right now but because “they’re the ones who are going to be paying the debt we’re racking up with COVID”, she said.

What we’re looking for from the summit is a really ambitious communique with a set of policy prescriptions for change and improvement that young people want to see, change that will really make a difference.”

See our extensive archive of stories about youth health.