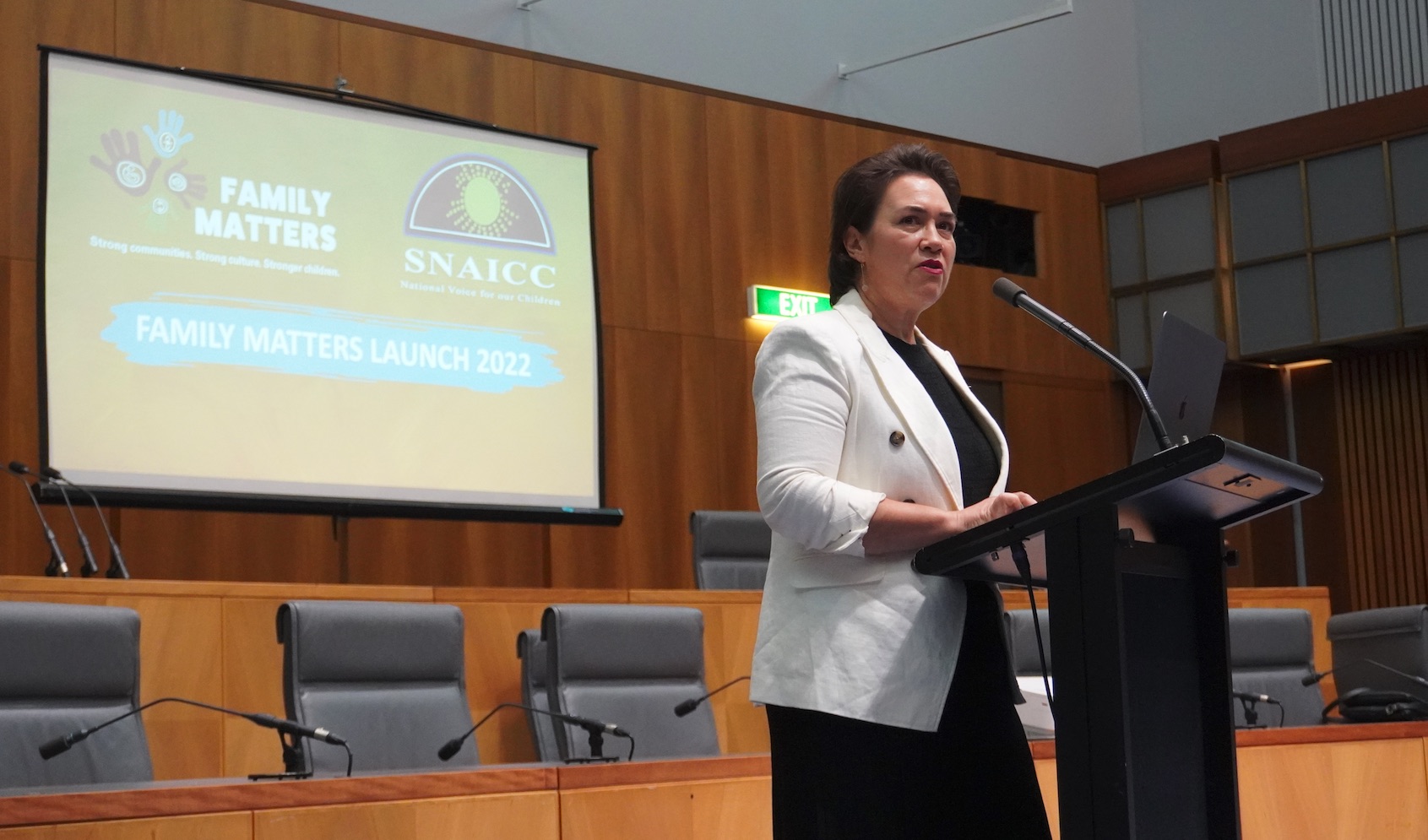 Introduction by Croakey: Aboriginal and Torres Strait Islander children continue to be separated from their families, communities and cultures at “devastatingly high rates”, according to the Family Matters Report 2022.

It says 22,243 Aboriginal and Torres Strait Islander children were in out-of-home care – equating to about one in every 15 – at 30 June 2021. The report – summarised in this infographic snapshot – calls for coordinated reform in housing, justice, disability and developmental delay, family services, education, child and maternal health and many other areas, in partnership with Aboriginal and Torres Strait Islander communities.

“While this report shows some signs of real progress, the unmistakable fact remains that too many of our children suffer the consequences of failures of successive governments to address the ongoing harm caused by child protection systems,” says the report. “The issues driving removal of children cut right across the social and political determinants of health and wellbeing.”

The Minister for Indigenous Australians, Linda Burney, who in launching the report said it held the answers to the problems it describes, yesterday announced investment of $334 million in a range of measures for First Nations children, including early years and education activities.

In the article below, Karl Williamson, one of the Family Matters Leadership Group, says the report includes examples of how Aboriginal communities are making a difference, “not because of these systems but in spite of them”.

“These stories of success, and growing political momentum for substantive, structural change give us hope,” he says.

It’s a story as old as the colony. Steal an Aboriginal child, try to make them white, and then spit them out broken when you inevitably fail. We have seen this fail through various iterations from early unsanctioned theft of children, to state endorsed assimilation policies, and now, modern day out of home care. At each stage sanctioned by some seemingly valid but always flawed and ultimately racist justifications. They all achieve, with a great deal of success, the separation and breaking of our people, families and communities.

Each year the Family Matters report provides a snapshot of how child protection systems are failing our children. It makes for upsetting reading, highlighting how year in year out child protection systems are failing to care for all taking Aboriginal children away from their families at ten times the rate of non-Indigenous kids. The thought of your children being taken would not cross the mind of most Australians but we are not all so lucky.

Changing a system by name, law or otherwise that delivers the same awful outcomes through the same awful processes is the very definition of insanity. Similarly, failing to value parenting practices that have sustained thousands of generations of thriving culture seems equally bizarre.

So how can we take a broken system that delivers the same dreadful outcomes and make something new? The answers to government sanctioned theft and subsequent overrepresentation of Aboriginal children in the child protection system doesn’t lie in the hands of ill informed, well-meaning white folk. It lies in culture and community.

We must listen to Aboriginal people at a community level and via powerful works such as the Bringing Them Home: the National Inquiry into the Separation of Aboriginal and Torres Strait Islander Children from Their Families, Safe and Supported: the National Framework for Protecting Australia’s Children 2021–2031, the work of Grandmothers Against Removal, and the Family Matters Roadmap. All of which show us how we can cease the cycles of stolen children, our national shame, and change for the better.

Across these, the vision of transformation put forward by Aboriginal communities has been strong and consistent.

As one example, the Family Matters Roadmap for Change offers four building blocks that together form a foundation for a new system that heals children, families and communities rather than tearing us apart. They are:

All we want is to have control over both ours and our children’s future, a system that is fair and accountable to the communities they serve, and services that work for us. Each year, the Family Matters report outlines fresh examples of community-led solutions that are making a real difference where government-led systems fall short.

In this year’s report we have highlighted the successes of some of our services, that are taking charge of their children and safeguarding the right of every child to grow up strong in family and culture.

They shared with us a story of a young person in foster care who was disconnected from family and culture for five years prior to their involvement. That young person has since been reconnected with family and is re-establishing their place and culture. Previously, mainstream services were unable to connect this young person with a single family member, Now they are part of a large, extended family network.

Community members who previously felt trapped by hopelessness are now taking steps towards a more positive future as leaders in their community. These outcomes are only possible because the program is founded in culture, empowerment and healing.

These are just two brief examples of how Aboriginal communities are making a difference, not because of these systems but in spite of them. These stories of success, and growing political momentum for substantive, structural change give us hope.

Aboriginal communities finally have a seat at the table in determining the systems (and our children’s) future through the National Partnership on Closing the Gaps Early Childhood Care and Development Policy Partnership.

We need not accept the broken system and same old story and excuses we are offered. By listening to Aboriginal communities, by valuing Aboriginal people as experts in their own lives, we can tell a different story of optimism, healing and success. We can, and we must, do better.

Karl Williamson is a Stolen Generation descendant, proud Wiradjuri and member of the Family Matters Leadership Group. Family Matters – Strong communities. Strong culture. Stronger children. is Australia’s national campaign to ensure Aboriginal and Torres Strait Islander children and young people grow up safe and cared for in family, community and culture and aims to eliminate the over-representation of Aboriginal and Torres Strait Islander children in out-of-home care within a generation, by 2040.