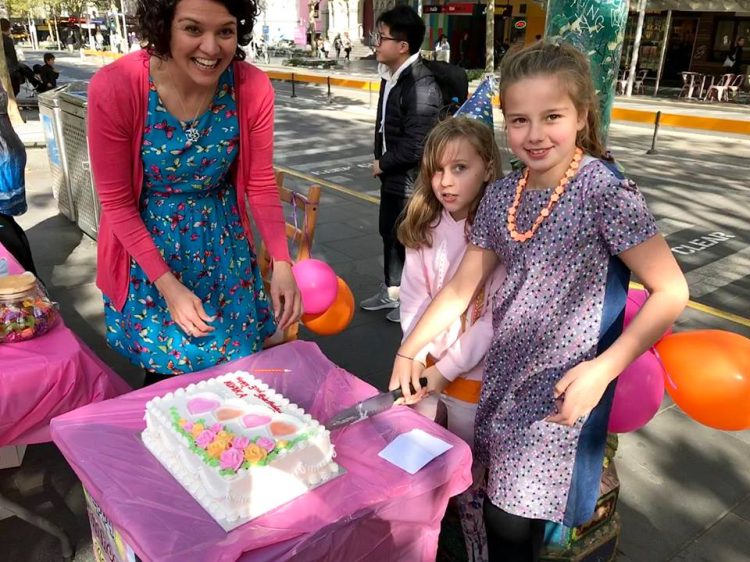 Children stand together with three-year-old in detention, on her birthday

Introduction by Croakey: Three years ago, a girl was born in the central Queensland town of Biloela. She spent her birthday today locked away in immigration detention in Victoria – but was not forgotten.

Among those marking her birthday with community events in Biloela and Melbourne was nine-year-old Isabelle Cameron, who was also born in Biloela and is now a year four student at Yarraville West Primary School in Melbourne.

Isabelle, who told the Melbourne gathering of visiting Kopika and her family in detention, said her birthday wish for Kopika was “to get her out of detention and for her to back where she is supposed to be, in Biloela, so she can have a peaceful life and grow up like most kids around Australia”.

It was Kopika’s 68th day in detention, since her family were removed from their Biloela home in an early-morning raid, as Isabelle’s mother, Simone Cameron, reported for Croakey earlier this year.

A federal court judge is currently considering an appeal against the Government’s plans to forcibly deport Kopika and her younger sister Tharunicaa, and their parents Nades and Priya to Sri Lanka.

Today’s events were held as part of the #HomeToBilo campaign, led by current and former residents of Biloela, who are asking Home Affairs Minister Peter Dutton to return the family to the community where their two daughters were born.

As Chandra Roulston, vice-president of the Callide Dawson Chamber of Commerce, wrote in the Sydney Morning Herald in March: “Our neighbours have been taken and we want them back.”

Margot McNeill, a former Anglicare worker who worked closely with the family in Biloela, choked with emotion today as she told the Melbourne gathering of how Kopika had changed since being locked up. She was not eating or sleeping properly and was frustrated about being cooped up.

McNeill said Kopika was known in Biloela as “a bright, active and engaging wee thing”, but said her “beautiful eyes no longer shine like they once did”.

“They look troubled,” McNeill said. “She appears uncertain and timid, certainly not the exhuberant toddler she was.”

McNeill urged Minster Dutton to “give this family back to the community, who loves and wants them to come home”.

Lavanya Thavaraja, a Tamil refugee and member of the Tamil Refugee Council, told the Melbourne gathering that the threat of deportation is causing Tamil refugees to kill themselves, and that the experiences of Kopika’s family is not an isolated story. “Australia’s refugee policy is killing people,” she said.

Below are the speeches given by Isabelle Cameron and her mother, Simone, a migration agent.

I would like to acknowledge that we are standing on the lands of the Wurundjeri people of the Kulin nation.

I was born in Biloela, and I see every reason why Kopika and her family want to go back. Biloela is a very quiet town. Everyone is caring and loving towards each other. When I found out we had to move away because of my dad’s job I was devastated.

The first time I met Kopika was at the detention centre. My mum and I have been visiting the family as much as we can over the last couple of months.

I think Kopika is a playful and funny young girl. She always likes to give you a hug and a kiss when you arrive for a visit.

There is nothing much to do in the detention centre visiting area. There aren’t many games or things to do. If we bring toys in for the girls to play with they aren’t allowed to take them back to their room.

The reason I go out to the detention centre is that I am probably the only other kid she has seen and played with in the last 2 months. If I couldn’t play with any other kids I’d feel really lonely.

My birthday wish for Kopika is to get her out of detention and for her to back where she is supposed to be, in Biloela, so she can have a peaceful life and grow up like most kids around Australia.

Birthdays are a time for celebration and optimism. A birthday party allows you to be around your special people, it’s a chance for a celebration of who you are and for hopefulness for your future.

There are many reasons to celebrate Kopika. She is a sweet, affectionate, energetic and inquisitive girl. Everyone who meets Kopika is delighted with her.

But this birthday will be very different for Kopika. Today she wakes up to her 68th day of detention. 68 days since she was taken from her home in Biloela, the only home she’s ever known, and flown to Melbourne, where she has been locked up behind razor wire in detention ever since. 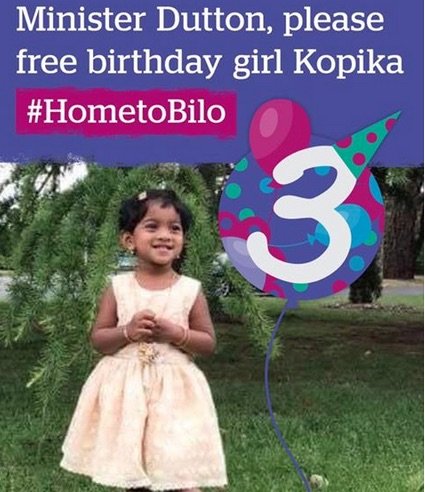 Kopika can’t receive any presents in detention, and she can’t even blow out birthday candles on her cake, if indeed she gets a cake. Any food brought into detention must be sealed in a package and approved by the guards.

There will be no photo mementos of this day because photos aren’t allowed either. So today we plan to give Kopika the celebration she deserves.

Despite the current situation for Kopika, there are many reasons to be hopeful for her future.

Firstly, we know what extraordinarily kind and resilient people her parents, Nades and Priya, are. They have been through so much in their lives and yet they still find a way to be positive.

Priya told me on the phone this week that even though they will miss the chance to celebrate, they feel grateful that so many of us out here are blessing Kopika with a birthday party.

Another reason to feel optimistic is because of the tremendous show of support that people right around Australia have shown for Kopika and her family.

This support started in Biloela, with a town that wouldn’t let their neighbours be taken without a fight. But it’s become much bigger than that.

People around Australia are helping Biloela in its efforts to get its friends back where they belong. Whether it’s signing a petition, ringing a politician, turning up to a birthday party or the Federal Circuit Court, singing I am Australian or happy birthday with us, offering to visit the family, it all counts.

All these little things add up to a resounding message for Nades and Priya – we are not going anywhere.

We will keep saying your names – Kopika, Tharunicaa, Nades, Priya, we will tell everyone we know about you.

We will be here, not just waiting, but agitating, until you are all home safe and sound.

Mr Dutton – today is a very good day to let Kopika and her family out of detention so they can go home to Biloela.

I’m going to finish with a birthday wish for Kopika. Dear Kopika, my wish for you is that you don’t have to spend one more night in detention.

My wish is that you can go home to Biloela very soon, where people miss your sweet smile and playful nature.

My wish is that soon you are home to roam free and play with the friends you miss so dearly.

PrevPreviousLessons from the battlefield – a rousing presentation to #Nurseforce
NextPutting Aboriginal and Torres Strait Islander community priorities into policy: What will it take?Next