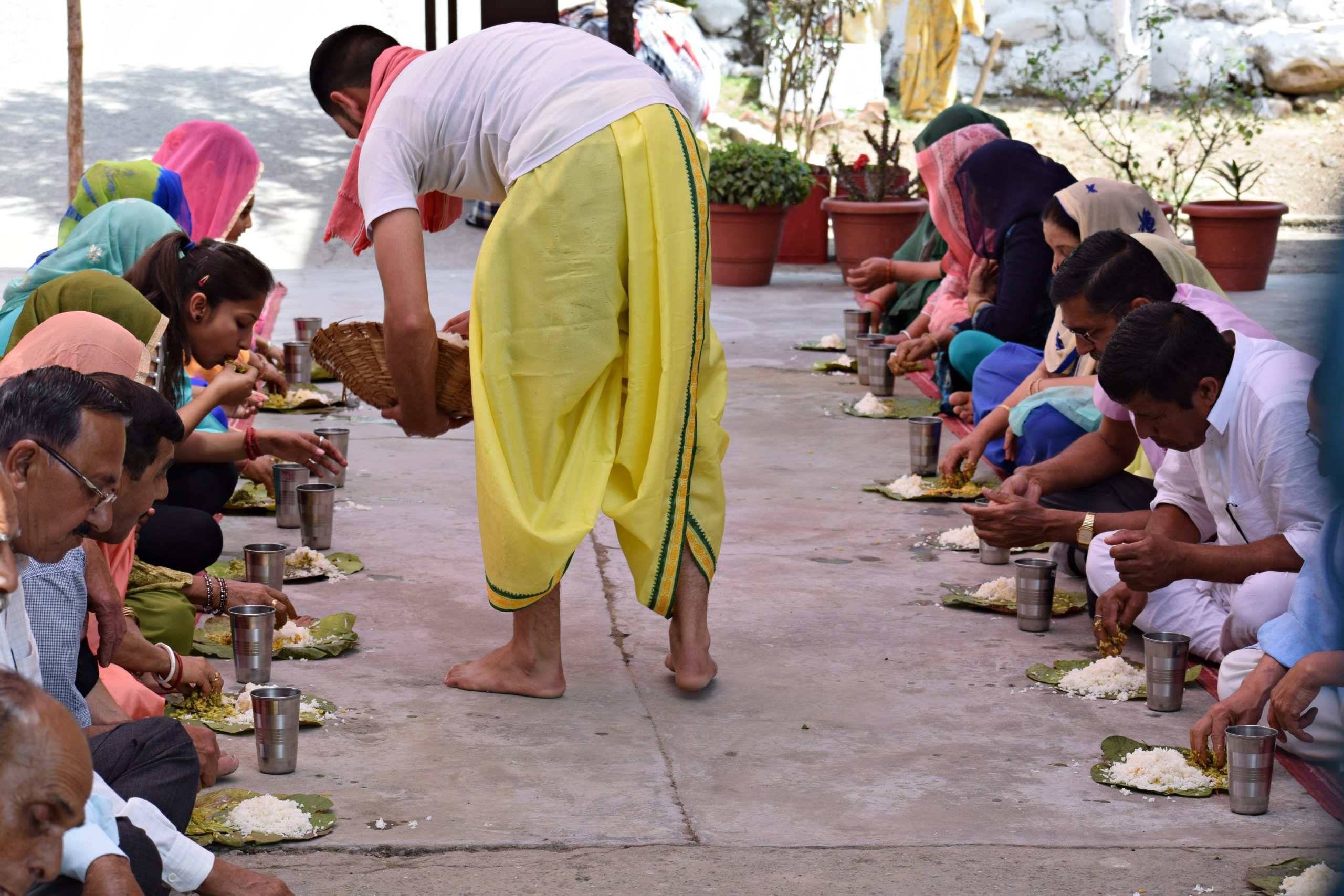 Introduction by Croakey: “I need to be blunt: the world is on the brink of a catastrophic moral failure – and the price of this failure will be paid with lives and livelihoods in the world’s poorest countries.”

These were the words of World Health Organization Director General Dr Tedros Adhanom Ghebreyesus as he addressed the 148th session of the Executive Board earlier this week.

Reflecting on the rollout of COVID-19 vaccines, he said: “More than 39 million doses of vaccine have now been administered in at least 49 higher-income countries. Just 25 doses have been given in one lowest-income country. Not 25 million; not 25 thousand; just 25.” 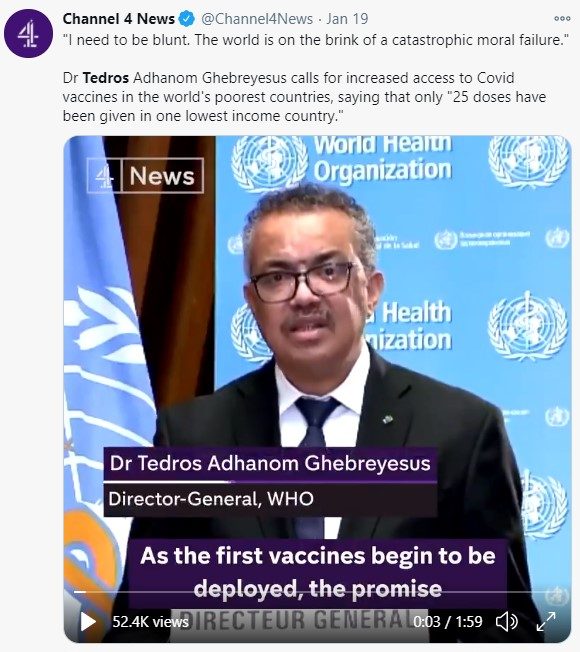 Ahead of his presidential inauguration on 20 January, Joe Biden attended a vigil in Washington DC to remember the thousands of Americans who have lost their lives to COVID-19. 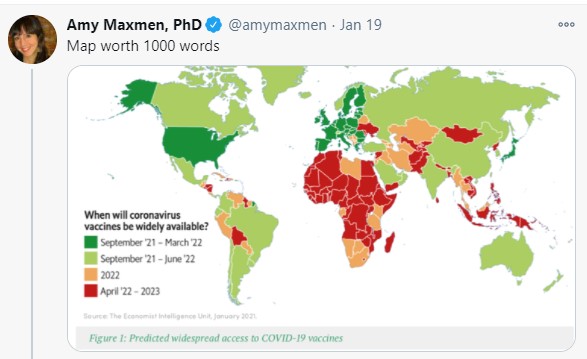 Throughout the COVID-19 pandemic, societal inequities have been laid bare. Indeed, speaking in May, Adhanom Ghebreyesus said that this contagion had exposed “the fault lines, inequalities, injustices and contradictions of our modern world. It has highlighted our strengths, and our vulnerabilities”.

Across the world, civil society organisations – large and small – have stepped up to provide essential needs and support to at-risk communities, according to a new report.

In the article below, we outline some of the report’s key messages and stories.

Civil society organisations (CSOs) have played a critical role in supporting vulnerable and marginalised communities at risk of falling through the cracks as COVID-19 has swept the globe.

A report released late last year has highlighted the many ways in which CSOs have stepped in to fill the gaps, to protect vulnerable and marginalised communities that are often at greatest risk of harm in the pandemic.

According to the Solidarity in the Time of COVID-19 report by CIVICUS – a global alliance of civil society organisations and activists – CSOs have supported communities in myriad ways, from providing essential services to sharing much-needed accurate information.

“CSOs worked not only as frontline responders, but also as defenders of human rights during the pandemic, including the rights of vulnerable and excluded groups,” the report authors noted.

They wrote that, as the pandemic spread across the globe, communities looked to their countries’ leaders to “make choices to protect lives and livelihoods”.

“There were states where decision-makers made broadly sound choices that limited the transmission of the virus and the impacts of emergency measures,” the authors wrote.

“There were also examples of chaotic, corrupt and self-serving decision-making that cost lives, restricted rights and worsened impacts. In many cases states introduced excessive rights restrictions, and some clearly used the emergency as a pretext to centralise power and crack down on fundamental freedoms.”

The authors wrote that much of civil society’s responses focused on mitigating the effects of COVID-19 control measures on vulnerable and excluded groups.

“Lockdowns, curfews and other emergency restrictions were often imposed hurriedly, with little preparation and mostly with no consultation with civil society, and consequently had unforeseen impacts,” they wrote.

“While many states offered support in response to the dramatic slowdown of economic activity, schemes were often inadequate, leaving many people still struggling.”

For example, they noted that people working in the informal economy could not access support measures that only recognised formal labour. Also, people lacking official identity documents often did not qualify for assistance, and women were marginalised by support schemes that targeted men as heads of households.

“Civil society worked to compensate for these deficits by providing vital support and information.”

While pandemic and emergency measures resulted in increasing community need for support  – particularly among excluded groups and those left without income – many crucial services, such as schools, shelters and community kitchens, became unavailable.

The authors pointed to efforts by CSOs across the globe – from Malaysisa, Mexico, and Myanmar to Japan, Spain, Morocco and the Democratic Republic of Congo, and many more – that helped to provide essential support to marginalised communities.

“Across Asia, the Asian Indigenous Peoples Pact and its members supplied food to Indigenous communities in need, including in India, where racism against Indigenous people intensified during the pandemic, leading to some people being thrown out of their homes and barred from public transport and grocery stores,” the authors wrote.

We intensified our work to support migrants, slum dwellers and daily wage earners. Staff, members and volunteers cooked food, stitched washable masks, produced sanitary napkins and prepared sanitiser. We supplied food packets and food grain kits to over 30,000 people, low cost washable masks and sanitiser to 2,000 people and sanitary napkins to thousands of women and girls. We provided travel support to 60 migrant families trying to return to their home villages.”

Brazil was another nation in which Indigenous communities were hit hard by COVID-19.

In Cameroon, the report said, mask use was mandated by the state, but free masks were not provided. So, Crusaders for Environmental Protection and Ozone Watch – which usually focuses on environmental issues – turned its attention to distributing masks, producing sanitiser, and installing buckets for hand washing.

The report also highlighted efforts by CSOs in Italy where thousands of Nigerian women, who had been trafficked by gangs into sex work, were abandoned during the lockdown.

The undocumented women were unable to access help from the state, so civil society groups stepped in to make regular food deliveries.

Some religious groups also played crucial roles in supporting the community, said the report authors, pointing to the efforts of United Sikhs in the US.

The group repurposed some communal kitchens in Sikh temples to provide essential meals to those in need, including older people sheltering at home.

“Sikh temples also provided food and water to people taking part in Black Lives Matter protests, connecting with churches to do so,” the report said.

Civil society also acted as a hub to disseminate accurate information during the pandemic, according to the report.

“Misinformation, both intentionally and unintentionally produced and shared, often encouraged unsafe behaviours or the targeting of excluded groups,” the authors said.

They wrote that several nations – including Cambodia, Cuba and Niger – introduced crackdowns on the freedom of expression in response to journalists and others criticising state responses to the pandemic.

“In the face of these challenges, civil society did what it could to get the message out. Information developed and shared by civil society sought to help people understand how they could avoid infection and seek treatment if experiencing symptoms. It also set out the support schemes available and people’s social, political and economic rights, and ways of defending these under emergency measures.”

Mesud Gebeyehu Reta of the Consortium of Ethiopian Human Rights Organizations said in the report that the pandemic “took us all by surprise”.

But we reacted quickly and produced informational materials in nine local languages, which we distributed to all Ethiopian regions. We also mobilised resources for advocacy using radio and TV and reached out to partners for additional support.”

“In several countries, including India, Kenya and the Philippines, punishments for breaching emergency regulations were severe and brutal, patterning onto existing practices of repression,” they wrote.

Also, they noted that some states used emergency measures to attack excluded groups, including LGBTQI+ people, migrants and refugees, and environmental and land rights defenders.

“In the Philippines, Youth Voices Count helped respond to this need by distributing LGBTQI+ care packs, including to people living with HIV/AIDS,” the report said.

And, states weren’t the only offenders. The authors wrote that numerous private sector companies used the pandemic to claw back labour rights. They said that almost 5,000 job losses in Cambodia, Bangladesh, India and Myanmar were assessed as being linked to an employee’s union status.

Against these challenges, CSOs worked to promote awareness and action on the human rights dimensions of the crisis.

“The message was that times of crisis do not mean there should be less accountability, but rather that scrutiny becomes more essential. CSOs therefore continued their existing work to hold decision-makers accountable, and established new structures to monitor the rights impacts of the pandemic and emergency measures,” the authors wrote.

In Myanmar, 97 CSOs published a joint statement raising concern about the way in which the state was handling the crisis and its neglect of human rights.

The report noted that the International Center for Not-for-Profit Law launched a COVID-19 Civic Freedom Tracker, monitoring state responses to the pandemic that affected human rights and civic freedoms.

“At the time of writing, measures that impact on the freedom of expression, for example, were reported in 42 countries,” the authors reported.

“In June, around 100 CSOs from all over the world, led by International IDEA, as well as almost 500 prominent individuals who included several Nobel laureates and former heads of state and government, endorsed a public Call to Defend Democracy. Shortly after, a Global Monitor of COVID-19’s Impact on Democracy and Human Rights was established.

Among the many stories of community co-operation contained in the report, is the story of the hard lockdown of Melbourne’s public housing towers in July last year.

The report authors said that, within 24 hours of the lockdown, residents developed an online information sheet about the lockdown, translated it into 10 languages and distributed it by text messaging and social media.

“People came together to do a job that governmental bureaucracy would have found too complex, with the aims of fostering local compliance, building trust between residents and health workers, avoiding confrontation with the security forces who had descended to enforce lockdown measures with little prior warning or explanation, and demonstrating that the complex’s residents had their own sources of knowledge and resilience,” the report said.

“Civil society should continue to work to ensure that human rights are placed at the centre of the ongoing pandemic response, and that all restrictions on civic space and human rights imposed under emergency conditions are rolled back as soon as possible,” say the authors.

For this to occur, action is needed from all sectors, the authors said.