Climate change and health: an update on the RACP controversy, and other news

As previously reported at Croakey, a recent media statement on climate change from the Royal Australasian College of Physicians generated some serious concerns amongst College Fellows and more widely.

The RACP statement has been taken up by climate change sceptics, and features in the YouTube clip below attacking the recent campaign that starred Cate Blanchett promoting a carbon tax.

The reference to the RACP is below. 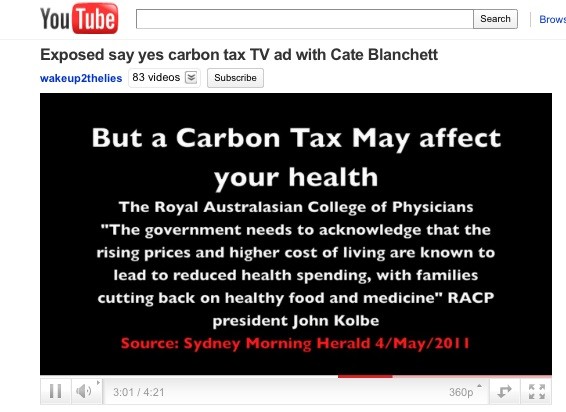 For those wondering how the College has responded to the concerns of members and others, below is an email from College president Dr John Kolbe, that gives some insights into this.

His stated wish to keep out of politics ignores the reality that public health is intensely political, and that most advances have come about as a result of vigorous engagement by public health advocates in the political fray.

The RACP’s official stance contrasts notably with the recent open letter calling for a carbon tax that was signed by a number of medical luminaries, including Professor David de Kretser, Dr Fiona Stanley, Sir Gus Nossal, and Professor Patrick McGorry.

(Below the RACP letter are some links to other recent articles for those with an interest in climate change and health).

Letter from the President of RACP to all Fellows

I wish to advise you of some recent events within the College that I view with concern. While issues will always arise in an organization the size and complexity of ours, this is a matter that I feel the Fellowship at large should be informed about.

Some of you may be aware that internal College working documents regarding climate change were released by a person or persons unknown to the online media publisher Crikey which published an article critical of the College’s media statements on climate change. This has been damaging to the reputation of the College and negative coverage such as this only undermines our hard work and hinders what we are all trying to achieve.

The background to this is that a number of Fellows who were concerned about the health impacts of climate change formed a group within the College. Several weeks ago this group requested that a draft media statement which they had prepared, be released by the College. As President and designated spokesperson of the College for media enquiries, I reviewed the draft prior to its release. Whilst I agreed with most of its content, even in the absence of a College policy on climate change, I requested that several changes be made to the draft. The changes that I requested were to place greater emphasis on the transitional impacts that any carbon pricing legislation may have on vulnerable patients. Some of the Fellows involved with the climate change group and others did not agree with the initial College media release on climate change and the changes that I made.

Currently in Australia the most widely used strategy to deal with the climate change issue is to treat it as a “hot” political issue that is divisive and partisan. I considered it essential that any statement from the College did not seemingly align the College with any political party. Also that the College did not get into areas such as taxation, which is outside our area of expertise. It is important to point out that, as President, I instructed the amendment of the draft release submitted to me by the working group to avoid these issues. The priority for the College in any public statement must be the well being of patients, their families and the community, particularly the most vulnerable members of the community.

I wish to make clear a few points regarding the College’s position on Climate Change:

The College confirms its support, and continues to publicly advocate for, urgent action on climate change. This is stated in our media releases of 2009, 4 May and 20 May 2011.

The College does not have a view on the preferred model for pricing carbon whether this be a carbon tax, an emissions trading scheme or any other mechanism.

The Climate and Health Alliance (“CAHA”,) of which the College is a member, acknowledges that the Australian community favors actions to address climate change that consider any negative consequences of pricing models on the most disadvantaged in our community, including the poor and the sick.

The College is working with the Australian Government on the health component of the proposed compensation package.

These points have been made repeatedly in RACP media statements but have seemingly been lost in relation to recent events.

What was most disappointing about these recent events was that individuals chose to discuss internal processes in the public domain and that internal working documents, including a letter of resignation, were leaked to the media. Such activities are contrary to the RACP Code of Conduct including that of confidentiality.

As a result of our releases, the College is now working with the Australian Government providing advice on energy intensive home based treatments, such as dialysis, home oxygen and sleep apnoea (CPAP) devices, that should be taken into account so that appropriate compensation for any rise in power costs resulting from a price on carbon can be determined. This is a significant measure for patients and an important consideration for the successful introduction of legislative measures to address the impacts of climate change. The Australian Government has established a working group to determine the details of the carbon pricing compensation package.

Within the College there are 13,500 Fellows, with widely differing views on many issues. It is not appropriate for public releases on important matters such as this to be developed without appropriate consultation and involvement of other groups within the College. Ultimately everyone has the right to speak out as an individual on any issue; however, we owe it to each other to be inclusive and to recognise that sometimes in reaching a consensus we all need to compromise to some extent. It is important that the College operates cohesively and strategically on these issues. Recently the College Board reaffirmed that comments or public statements made on behalf of the College can only be authorised by the President or President Elect. This in no way removes the right of any Fellow to speak out in their capacity as an individual or a representative of another unaffiliated organization, on any issue.

Please be assured that, as President, I take very seriously my responsibility to ensure the views of the whole Fellowship are at all times represented fairly.

Some serious reading on climate change

Meanwhile, in case you missed it, The Conversation has been running a useful series on climate change (which had a warm plug from this recent article in The Guardian investigating “Why Australia is vulnerable to both climate change and climate sceptics”.)

And this article by the ANU’s Associate Professor Colin Butler warns that there is growing consensus that a four-degree increase in temperatures will be our fate, and “will likely prove catastrophic for our health”. He adds: “We must avoid it at all costs.”

Meanwhile, it’s good to see a GP publication like Medical Observer investing in coverage of climate change as a health issue, with its recent annual “green issue”, which can be downloaded here.

Some global news on climate change and health

The latest newsletter from the Climate and Health Alliance details a new European report urging the healthcare sector to reduce the footprint of its buildings and to create low carbon, sustainable, patient-centred healthcare services. The State of the Art Report on Low Carbon Buildings in the Health Care Sector is here.

The newsletter also cites a new WHO report outlining health benefits from the implementation of strategies to address climate change. The Health in the Green Economy series reviews the evidence from emissions reductions in the health, energy, transport, and housing sectors, revealing green investments can help prevent cardiovascular and respiratory disease, obesity and some cancers. The report calls for the health sector to play a bigger role in advocating for green investment as it can “prevent much illness, at very little cost”.

Meanwhile, this Association of Health Care Journalists blog suggests that health journalists have a critical role in reporting on climate change:  “More than anything else, the link between health and climate promises to transform abstract observations into personal actions and reactions as opinion among health professionals reaches critical mass.”

The blog also links to an investigation of the health effects of climate change by US journalist Linda Marsa, who was recently in Australia researching a book on this topic. (I hope to have more on this for Croakey readers anon).

And this New York Times article details how health professionals and health organisations in the US are pushing for action on climate change.

All of which suggests that the RACP is somewhat out of step with the leaders in the field of climate change and health….

PrevPreviousHow to make best use of the plethora of health performance reporting agencies?
NextJunk food advertising to kids: it’s time to call it a dayNext