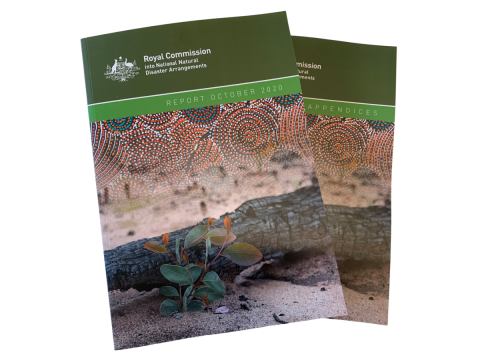 In a year that started with a bushfire crisis and is ending with a pandemic, the need to improve Australia’s response to natural disasters has never been more urgent.

The Royal Commission into National Natural Disaster Arrangements report was released last week and its 600 pages provide a comprehensive picture of Australia’s ability to prevent and respond to future natural disasters.

In the post below, Dr Arnagretta Hunter, a consultant physician and cardiologist and the inaugural Human Futures Fellow at the ANU College of Health and Medicine, discusses the findings of the Report and discusses some of its key messages around climate change, government and emergency systems responses and the importance of adaptation.

For more information about the report, a comprehensive Twitter thread on its findings and recommendations by Croakey’s Amy Coopes can be found here.

The Royal Commission into National Natural Disaster Arrangements report released last week makes sobering reading for Australia’s future. The changing climate and its effect on the most climate vulnerable developed country sits at the centre of this report.

There is a core acknowledgement of the increasing risks that we face as a community through global warming and climate change, and timely recognition of how very poorly prepared we have found ourselves, particularly when tested

Australia needs to be better prepared for these natural disasters. They may not happen every year, but when they happen, they can be catastrophic. The summer of 2019-2020 – in which some community is experienced drought, heatwaves, bushfires, hailstorms and flooding – provided only a glimpse of the type of events that Australia may face in the future.  (page 22)

The challenge of climate chance

This is a detailed analysis of natural disasters in Australia, what happens now and what needs to change in light of an increasingly serious risk.

The report itself runs at almost 600 pages and is followed by an appendix of another 400. It maps the history of Australia’s natural disasters, which is rich in environmental events particularly since colonialization and changes to land management.  What this report makes clear, however, is that the changing climate brings a significant impact on risk of natural disasters with increasing frequency, intensity and consequences for these events.

This central acknowledgement of the challenge of climate change is the right platform from which to assess Australia’s national response to natural disasters.

The hotchpotch approach to disaster responses that has evolved over the past few decades has been adequate for smaller disasters but is far from adequate to meet the challenge of natural disasters that increase in scale, duration and intensity, crossing multiple state boundaries and affecting large parts of Australia in the same season. 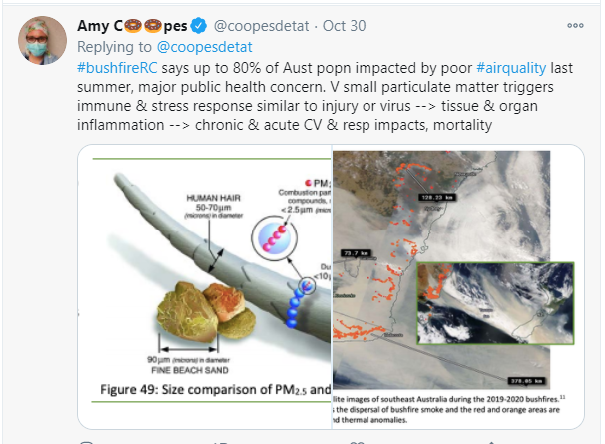 The bushfire season 2019/2020 tested our government and emergency systems.  24 million hectares were burnt. 3 billion animals killed or displaced.  33 people died directly during the fires and many hundreds from exposure to bushfire smoke.  Thousands of homes were lost.

The risk of the fire season was under-estimated without a coordinated national approach, without adequate scenario planning or integration across territorial boundaries. We found ourselves underprepared for the magnitude of the disaster and for the need for an integrated national response. 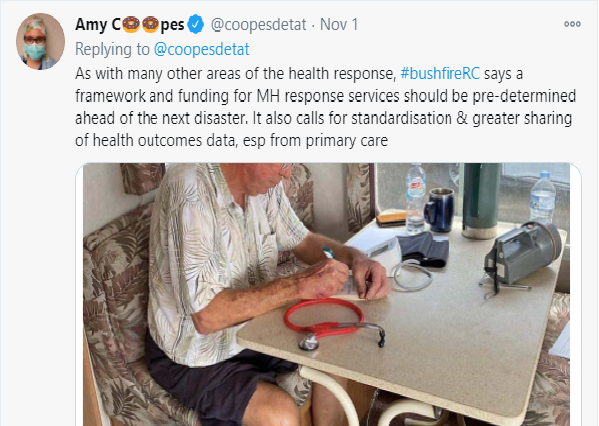 The report calls for a coordinated, integrated all-whole of government response to national natural disasters. The starting point is with science and forecasting.  The report comments on the absence of adequate forecasts or scenarios for the temperature rises that are predicted.

There is a very serious need for this.  Some projections for temperature rise in Australia estimate more than 4-degrees rise by 2100.  While previously the CSIRO and the federal government have worked on scenarios, currently there is little government work done on the implications for this.

Yet there is a strong case that this average Australian temperature rise would render parts of northern and central Australia uninhabitable during the hotter months.

Work on this, and other, climate scenarios should be a central part of our federal and state government activity integrated across all elements of government.  #BlackSummer was a ~2-degree event.  We may have years with higher average temperatures as soon as the next decade. 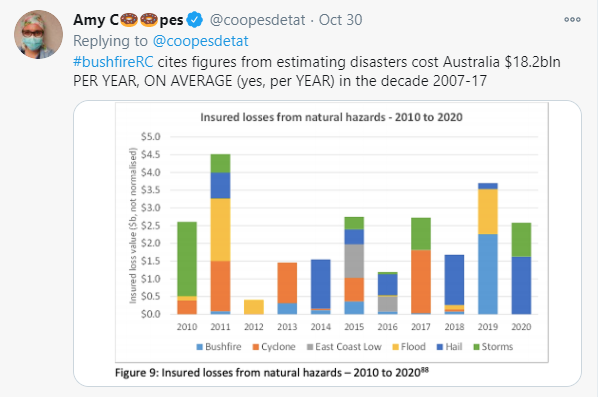 Adaptation needs to be built into all elements of Australian life.  From where we live, the homes in which we live, and the communities with whom we live.  The report recommends recognising environmental risks and communicating them consistently to communities.

It looks at building standards and makes recommendations that future natural disaster risk be considered in planning decisions.

Understanding of insurance requirements and support, better understanding of messages for property owners in disaster vulnerable environments.  Firefighting capacity is assessed in detail. Attention will likely be given to the need for a dedicated Australian aerial firefighting service. Integration and support for defence force and volunteer community engagement needs better structure.

There is a call for consistency in the messaging. Consistent air pollution monitoring as a warning mechanism is a cross state boundaries. Consistency in directions for shelter, the shelters required and the protection of vulnerable communities.

Integrated communications platforms, such as emergency apps, with consistent messages and that comfortably cross state boundaries.

Supply chain vulnerability is recognised as a serious issue. Disasters such as fire, flood and storms have tested our supply chains. Heat continues to test our supply chain in the summer period. The coronavirus pandemic has particularly demonstrated the real risks to health care of supply chain disruption with multiple essential medicines in critically short supply during 2020.

The report calls for national approach to essential services and goods with detailed understanding of the current supply chain and associated vulnerabilities.

The health impacts of climate change are apparent throughout this report, as natural disasters kill and injury people and radically alter the lives we live.  The relationship between an environment under stress during natural disasters and health of the affected community is well understood with mental health and trauma responses long-lasting.

The report calls for better understanding of the environmental impacts of health to be reflected in our health data. This is a key element to understanding the deep effect climate change has on our human health and wellbeing.

The Royal Commissioners are not calling for carbon pollution reduction, nor is it their role or a substantive criticism.  The tension between action on mitigation and need for adaptation has been apparent in climate advocacy circles for a long time with a tendency to focus dominantly on mitigation.

This report pains a serious picture of the importance of adaptation as a central tenant of the Australian response.   The Royal Commission into National Natural Disasters starts by painting future of increasingly serious natural disasters that will test our imagination and capacity. We all need to give this deep consideration and attention.

PrevPrevious#CroakeyLive invitation and US election night guide
NextCOVID-19 slashed health-care use by more than one-third across the globe. But the news isn’t all badNext