Climate change hits the headlines, despite the intense control efforts at G20

The Australian Government’s efforts to distract the world from its inaction on climate change have been blown out of the water as the G20 leaders meeting kicked off in Brisbane.

US President Barack Obama’s speech at the University of Queensland, stressing the importance of climate action, pledging $3 billion to the Green Climate Fund to help developing nations, and focusing on equality and participation of women in societies – can be seen as something of a “shirtfront” to the Australian Government’s priorities. (Update: you can read the full speech here).

Turkey’s PM, Professor Ahmet Davutoglu, also highlighted the importance of acting on climate change, “the biggest challenge to all humanity today”, and outlined a broader and more inclusive agenda for when his country succeeds Australia as chair of the G20 next month, according to this report in the Sydney Morning Herald.

Headlines such as “Abbott’s nightmare: World leaders to swelter through G20 heatwave” can only be adding to the, ahem, heat on the Government.

Nonetheless, the overwhelming message from events such as the G20 Leaders Summit and APEC is just how much effort is put into control and choreography, according to Dr Ginny Barbour, a Brisbane resident, Croakey contributor and an editorial director at PLOS journals.

Control and choreography in action at G20

As the G20 roadshow rolled into Brisbane over the past few days, several new words became increasingly common, along with a new sport of world leader (or at least their vehicle) spotting. That’s for the small subset of Brisbane residents who didn’t plan an escape this weekend.

“G20 precinct” – the newest addition to my dictionary, is not a kind of world shopping forum, but a strange place where there are no buses (because the motorcades – see above – use the bus lanes, where police can stop and ask you, well pretty much anything, search your bag or anything else).

It’s also a place which is pretty empty – that’s apart from the literally hundreds of policemen (defining characteristics: large, heavily armed, no sense of humour) and security men (defining characteristics: incredibly well dressed, no sense of humour). Sadly, the G20 precinct is all that most world leaders will see of Brisbane.

In Brisbane City hall, in a meeting yesterday organised by Griffith University and addressed by the Turkish Prime Minister, Ahmet Davutoglu, the atmosphere was also one of control.

This was an audience of academic and policy wonks who the day before had posed unscripted questions from the audience to the speakers (I know, I asked one – on the astonishing lack of health and inequality on the G20’s agenda) but by Friday the questions were shut down, the choreography of the audience complete.

By a strange quirk of (separate) meeting planning, I was in Beijing earlier this week when many of the same leaders were also there for the APEC meeting.

There the control was even tighter, and extended to keeping the population out of Beijing to reduce the pollution (so we had glorious “APEC” blue skies – a rare sight apparently), multiple road closures for the inevitable motorcades, and closure of multiple sites including Tiananmen Square. Along with closure of physical spaces, there is also the ongoing closure of cyberspaces eg Twitter, Google and more.

As the G20 weekend lumbers on, it’s hard to not think that pretty much everything of substance is sewn up before the leaders arrived.

What isn’t may slip in as a result of the intense name dropping, and heavy handed hints that littered the speeches leading up to the meeting.

Although the Turkish PM’s speech was, on the surface, polite and warm to his Australian hosts, the allusions he made to what Turkey plans for its G20 presidency, coming up next, were 180 degrees away from Tony Abbot’s priorities. He promised inclusivity, reform of governance of global institutions, a focus on climate change and on refugees – all areas starkly lacking from the Australian agenda.

But maybe that’s what it takes; leaders start lobbying now for 12 months ahead accepting that much of what actually goes on at these meetings is as controlled and choreographed by the year round G20 lobby industry that surrounds the summit as the security outside.

This same lobbying that is, now confidently predicting the next choreographed move – that G20 in 2016 will be in China.

The inability of such meetings to focus on what’s actually happening now seems clearer, but less defendable, and a missed opportunity (given the huge cost of the summit – Aus $400million plus) in an era where global security seems more fragile and rapidly changing than for many years.

It beggars belief, given the smorgasbord of pressing global health issues that PM Abbott might have raised – from climate change to Ebola and health inequities – that he chose to focus on his difficulties in getting support for the GP co-payment.

Below are some observations from the Twittersphere: 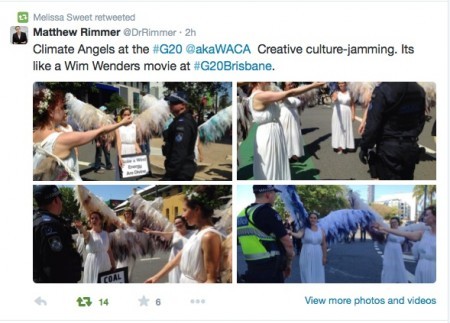 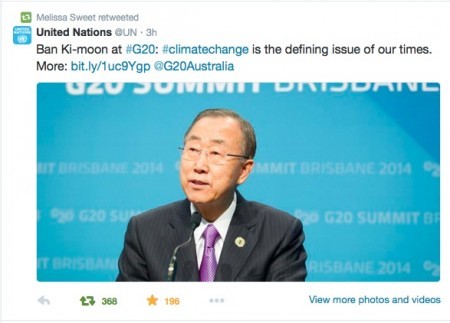 PrevPreviousAustralia’s Ebola response: A worrying insight into our lack of preparedness for other infectious disease threats?
NextBig Food, public health and sharing a table: food for thought or empty nutrients?Next