Fiona Armstrong, Convenor of the Climate and Health Alliance, writes:

With the federal election date looming, many Australians will be seriously considering their voting intentions and the issues that will shape them. So far the hot topics in the media have been the leader’s gaffes and characteristics of candidates, along with the state of the budget, asylum seekers and education.

But are these the issues voters and community leaders would prioritise given the chance?

One key issue that has so far escaped much attention is that of climate change, outside the narrow debate of shifting to a floating carbon price or, in the case of the Coalition, abolishing the emissions trading scheme altogether.

But while it may not be popular politically, and many in the media either misreport or avoid it, climate change is a key issue in the minds of the public and civil society.

Surveys of people’s understanding and concern about climate change in Australia reveal the vast majority are very concerned about implications of climate change for Australia and the world.

In a report on Dr Joseph Reser’s study published last year for example, climate change was identified as the most serious issue facing the world, with 86% of respondents expressing concern about its impacts and over half (54%) considering themselves vulnerable. Over 60% expressed a willingness to make personal sacrifices in order to tackle climate change.

Further insights are available from the Citizen’s Agenda project currently underway in marginal seats, which asks people to nominate the issues of concern to them this election. The feedback is insightful. In the seat of Melbourne, for example, how Australia will meet its obligations to cut greenhouse gas emissions is one of the highest rating topics.

In the seat of Gray in South Australia, voters are concerned about pollution from the coal fired power station and steel works, and call for zero emissions, clean, sustainable energy infrastructure to secure their economic future. An emphasis on our responsibility to reduce emissions and protecting natural resources are also strong themes in the seat of Fraser, Oxley, Longman, Brand, Denison, and Corangamite.

So while politicians appear to believe climate change can be taken on and off the political agenda like a saucepan off the stove, the planet continues to warm and the electorate continues to support effective action. Perhaps they’ve been able to ignore them as the major voices championing climate action have traditionally been from the political left or the environment movement.

But there is now a groundswell across the community for action – in many cases busting stereotypes about what climate action advocates look like – and the new players look like they won’t give up easily.

One such key constituency that might not be considered one of the usual suspects is championing the issues of climate change at this election is that of the health community, with key health stakeholders expressing concerns about the failure to effectively respond to climate change and its impacts on health and wellbeing.

While it may not be highly visible (thanks to a preference in the media for sound bites that rule out coverage of complex issues like climate change), the health community have been consistently pointing to the need for a strategic national response and serious emission cuts for at least the last couple of years.

There is no doubt that there is plenty of evidence to support this call: it’s now over four years since the international medical journal The Lancet called climate change the “biggest global public health threat” of this century.

Many Australians understand this risk, having experienced the health impacts of climate change already, with the recent hot summer causing blistering bushfires and serious heat stress, and severe storms and flooding responsible for injuries and deaths.

But while the health and medical community have repeatedly outlined the risks, with calls for either mitigation to reduce risks to health or support for the sector to respond, amid compelling evidence of significant and increasing impacts on health and wellbeing, the policy response to date has been virtually non-existent.

Climate change is no longer a future threat to health – health professionals and health care services are dealing with climate impacts now and, alarmed by what they see, they’re beginning to lend their voice to the chorus for action.

The calls are coming from across the professions with medicine, nursing, and physiotherapists among those recognising the need for urgent action.

As an editorial in the Medical Journal of Australia highlighted, carbon pricing is in fact a health protection measure. There are important health co-benefits that can accompany emissions reductions, and highlighting these can help build support for action.

Social workers, who know that the most vulnerable suffer the most from climate change, are calling for a national debate, with the Association for Social Workers saying last month: “It is now clear that continuing to do nothing will lead to human catastrophe on a scale we are only dimly aware of.”

Psychologists too know action is needed, as they help people manage the mental health impacts of extreme events, and support those distressed by our collective failure to respond.

Child health researchers and advocate are urging strong climate action as a priority to protect children, with research showing children and young people are already adversely affected by climate change.

So in light of all this excellent advice from those in the know, where is the national policy response to these risks to health?

Surely “the biggest risk to public health” would invoke a national strategy to reduce these risks, assist the health sector to respond, help health professionals to prepare for and manage these additional burdens on an already struggling sector?

Twenty-seven health sector organisations are part of the Climate and Health Alliance (CAHA) which is urging the federal government to make climate change a major health priority this election. It is seeking the development of a national strategy on climate and health, an agency to develop and guide policy, and a sustainable healthcare unit to help the sector transition to low carbon operations.

But none of this matters if we fail to mitigate – which is why the health community is placing a strong emphasis on strong emissions reduction targets and meaningful incentives for renewable energy to help deliver them. Continuing to rely on coal, and pursuing gas as an energy option – neither of these is available any longer as safe or desirable choices.

It is not as though we can’t respond – Australia has the natural resources and the economic wealth to make the transition to a low carbon economy – a transition that would bring economic, environmental and human health benefits. And as many experts have pointed out, the costs of not doing so are much greater.

The decisions we take as a country at this federal election will, as all elections do, offer the opportunity to change the course of history. What will be the path we choose?

• Fiona Armstrong is the Convenor of the Climate and Health Alliance (CAHA), a coalition of health groups representing over 300,000 doctors, nurses, midwives, social workers, psychologists, physiotherapists, allied health professionals and health care consumers. You can support CAHA’s call for a national strategy for climate and health here. 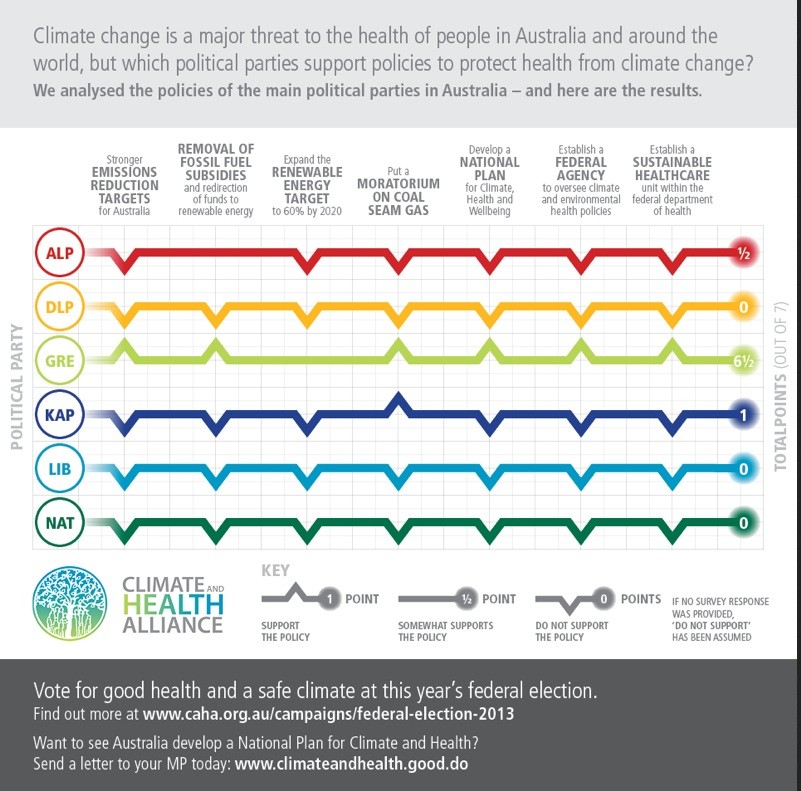 PrevPreviousWhen pictures speak a thousand words: injecting some values and health policy priorities into the federal election debate
NextAMA urges governments to implement health in all policies and to tackle the social determinants of healthNext