Climate change. Is the growing momentum for action enough to prevent this bleak future?

As recently reported at Croakey, these past weeks have brought an increased momentum in global efforts to tackle climate change – although the image below is a reminder that Australia is dragging the chain, at so many levels. 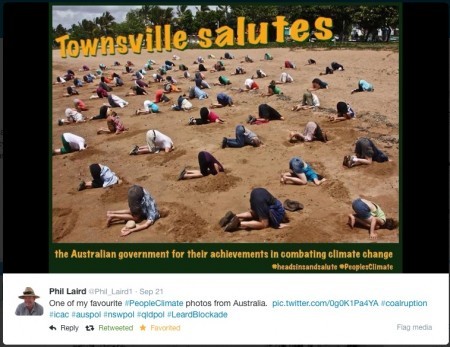 Ultimately, however, he does not believe the international community will act quickly enough.

“I fear that we are almost certain to miss the rapidly closing window of opportunity for effective policy decisions; that the world will commit to the necessary actions a decade or two too late; that global warming will reach 4-50C, or even higher, this century; and that human civilisation as we know it will be destroyed in the next two centuries.”

It is possible that we will look back on four weeks during August and September 2014 as a pivotal moment in humanity’s efforts to limit global warming by 2100 to less than 20C compared with pre-industrial temperatures. During this period three significant events occurred, all of which I was fortunate enough to attend.

In late August the World Health Organisation (WHO) held its (somewhat surprisingly) first ever Health and Climate Conference in Geneva. Opened by Margaret Chan, Director-General of the WHO, the three-day conference, billed as a ‘working meeting’, was convened to provide input to the revision of the WHO’s workplan on climate change and health, and support member states to integrate health into their national climate change policies (see here for more details).

Among the 400 attendees were approximately forty health ministers from around the world – but not the Australian Minister or anyone from the Department of Health.

I was, however, somewhat frustrated by the relative lack of discussion about three important topics: the effects of climate change on ecosystems and the threats that ecosystem destruction pose to human health and survival; the need for urgent action to reduce greenhouse emissions (i.e. corrective policy decisions must be made within the next 15 years); and the central importance of rapidly reducing and then eliminating our dependence on fossil fuels.

In contrast, a statement issued by the Global Climate and Health Alliance at the end of the conference took a far more assertive approach.

The #PeoplesClimate
The second event of significance was the People’s Climate March in New York on September 21st.

It is easy to become cynical and/or complacent about the influence of public demonstrations – another weekend, another march, another opportunity for the government or corporate giant or whoever to sit tight and let it pass before continuing to do whatever it was the protest was about.

But sometimes a public demonstration succeeds in sending a very clear message that governments do hear and I think that the New York Climate March was one of those occasions.

The number of people involved (300-400,000 in New York alone, and many more in similar marches around the world), the diversity of marchers (health workers, farmers, faith communities, young people, unions, grandparents, people with disabilities, the list is endless), the range of concerns expressed in banners and chants, and the combination of firm resolve and good humour among the marchers all combined to send a clear message to the many politicians and diplomats who were in New York that weekend (many of whom marched themselves, including the Secretary-General of the United Nations, Ban Ki-moon) – that people wanted action and were looking to governments and international organisations to get their acts together.

At several events during the following New York Climate Week, I heard politicians, diplomats and business leaders stating what a profound effect the march had had (and getting loud cheers if they said that they had marched).

Credit for this rests with Ban Ki-moon himself, who wanted to raise political momentum for the creation of a meaningful international climate agreement in Paris in 2015 (see below), persuaded the member states to participate and took a very active part in the day’s proceedings.

The Summit was a stand-alone event and it was not intended that member states would sign any statement or agreement at its conclusion. The only formal output from the Summit was Ban Ki-moon’s personal summary of the outcomes, which can be seen here.

As has been widely reported, Tony Abbott did not attend the Summit. It was, however, attended by the most heads of government that have ever been at the UN on a single day.

Although Ban Ki-moon’s summary notes strong support for a price on carbon, as advocated by the majority of economists and many reports by highly respected organisations (see for instance most recently the Better Growth, Better Climate report released by The Global Commission on the Economy and Climate during Climate Week), the thorny issue of what to do with the fossil fuel industry was once again carefully skated around.

So where now?
Readers will remember the failure of nations to reach agreement on how to limit climate change at the Conference of the Parties (COP) meeting in Copenhagen in 2009, and the widespread disappointment, despair even, that accompanied this.

COP meetings have continued since then with the aim of reaching an agreement at the COP meeting in Paris in December 2015 on targets to reduce greenhouse gas emissions (and how national strategies to achieve their targets will be funded) after 2020. Nations are required to submit their proposed targets and strategies by March 2015.

Concerned citizens and organisations across the world must now focus on encouraging their own country to submit national targets and strategies that will make a real contribution to limiting warming globally to less than 20C.

Although this has many elements, essential components must include a realistic price on carbon, the elimination of fossil fuel subsidies, and the creation of policy and funding environments that will encourage the development of renewable energy sources.

This is very problematic in Australia of course, as there seems no possibility whatsoever of the current national government adopting any of these policies. And it seems equally unlikely that an ALP government would reintroduce a carbon pricing mechanism in its first term if it was re-elected.

I opened with a ray of hope. I would dearly like to close by burnishing that ray but I cannot, I can only tarnish it.

I am extremely pessimistic not only about Australia making an appropriate contribution to limiting climate change in the foreseeable future, but also about the international community reaching agreement in Paris.

I fear that we are almost certain to miss the rapidly closing window of opportunity for effective policy decisions; that the world will commit to the necessary actions a decade or two too late; that global warming will reach 4-50C, or even higher, this century; and that human civilisation as we know it will be destroyed in the next two centuries.

• Peter Sainsbury is a Visiting Professorial Fellow, Faculty of the Built Environment at the University of NSW and Associate Professor, Sydney School of Public Health, University of Sydney. He was invited to attend the WHO Health and Climate Conference and the UN Climate Summit as a representative of the Climate and Health Alliance.

• Here you can find more than 140 stories on climate change and health from Croakey’s archives.