Climate change & refugees: as Pope Francis leads the way, will Australia get a miracle conversion?

Australia is playing the ultimate outsider in two of the most pressing global issues that have this week seen our devoutly Catholic Prime Minister Tony Abbott at odds with the Pope on both asylum seekers and climate change.

As the New York Times reported:

VATICAN CITY — Pope Francis on Thursday called for a radical transformation of politics, economics and individual lifestyles to confront environmental degradation and climate change, blending a biting critique of consumerism and irresponsible development with a plea for swift and unified global action.

The Pope’s landmark Encyclical Letter or Laudato Si on “Care for our Common Home” is,  at 184 pages, quite a read but he has also been tweeting profusely: here’s a taste: 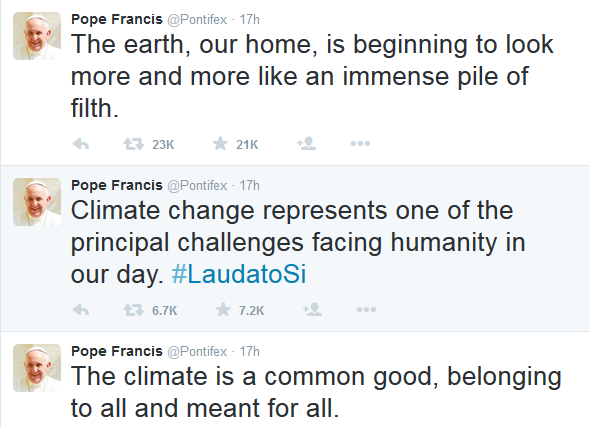 The Prime Minister has yet to comment, although Communications Minister Malcolm Turnbull was quoted as saying “everyone will give great weight” to the encyclical.

But any major conversion could well be a miracle given Abbott’s previous comments about the science of climate change being “crap” and this week’s talkback radio discussion about windfarms, which he said were “visually awful”, very noisy and, again despite the science to the contrary, posed potential health impacts. He said he wished he’d been able to get rid of more under the deal with Labor on the renewable energy target (RET).

But the Vatican is no wilting violet so it will be interesting to see where pressure is placed in the lead up to the UN climate summit in Paris this December and how other leaders looking to create a legacy might act. 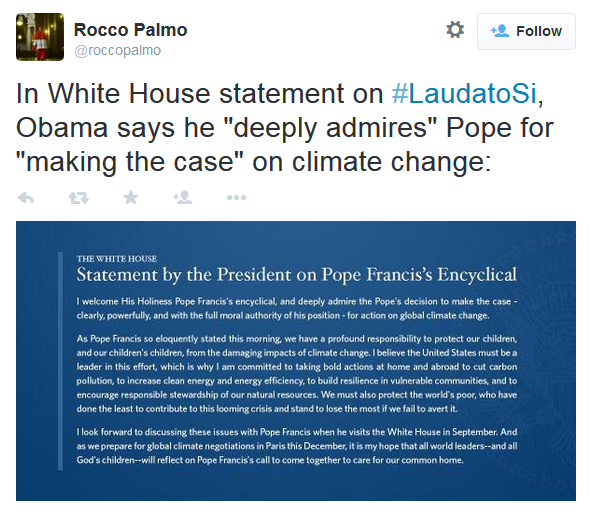 According to the Australian Financial Review, a leading German climate change authority and adviser to the Pope on the effects of global warming has lambasted Australia and said our reliance on coal exports to China is a “suicide strategy”.

Pressure for action will also come next week when the Lancet, which in 2009 ran a series of articles on climate change as ‘the biggest threat to global public health of the 21st century’, follows up with a second series of articles next Tuesday 23 June.

“Australia and Australian people stand to lose so much from the impacts of climate change; it is in our national interest to be amongst the leading nations to ensure the world limits warming to well below 2 degrees. A zero carbon pollution future is possible, and it is all of our responsibility to make that future a reality for our children, and their children.”

In terrible timing, this was once more put in the spotlight during Refugee Week 2015 over allegations from Indonesia last week that Australia has paid people smugglers (who the government has reviled for their ‘evil trade’) to turn back asylum seekers. For good measure, the government also this week put forward legislation to establish so-called “good order” in detention centres in Australia and on Nauru and Manus Island. Former Victorian Supreme Court judge has said the tougher powers would effectively enable detention centre personnel to “beat asylum-seekers to death.”

The Pope has been a powerful advocate for the rights of asylum seekers. His first visit outside of Rome as Pontiff was to the Italian island of Lampedusa, where tens of thousands of asylum seekers arrive each year – there he condemned the “globalisation of indifference” towards the plight of refugees. This week he was quoted as saying that those who “close the door” to refugees seeking a safe haven should ask God’s pardon.

As advocates and legal experts sought to determine whether Australia had broken domestic or international laws in paying off people smugglers, a new report issued in the lead up to World Refugee Day this Sunday underscored the scale and complexity of the refugee problem facing the world.

The United Nation’s High Commissioner for Refugees (UNHCR) annual Global Trends Report: World at War said that worldwide displacement is at the highest level ever recorded, with nearly 60 million people forcibly displaced at the end of 2014. The numbers are staggering:

Globally, one in every 122 humans is now either a refugee, internally displaced, or seeking asylum. If this were the population of a country, it would be the world’s 24th biggest. 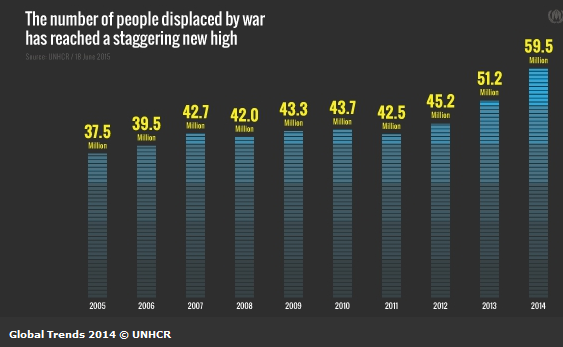 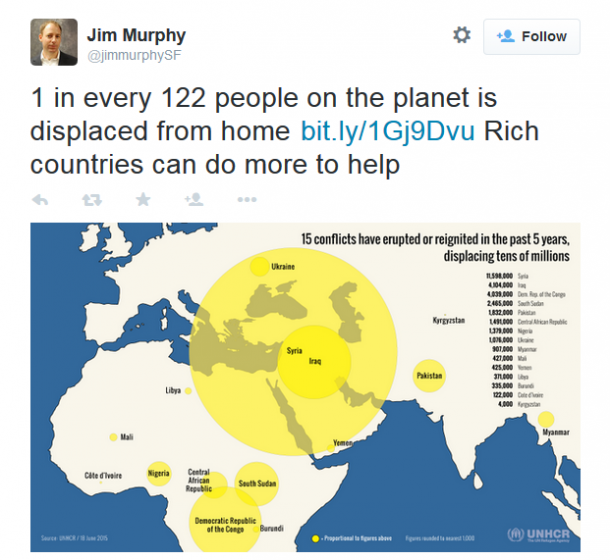