Sometimes as a parent you get sick of the sound of your own voice repeating the same warnings, requests and instructions to your children.  It feels exhausting, frustrating and some days demoralising.

Despite the overwhelming evidence, scientific consensus and increasingly dire predictions of impact, governments seem incredibly determined to take minimal action on the issue of climate change.

Two interesting articles published in December share some theories as to why it could be that governments are so reluctant to demonstrate leadership in this area.

Brulle defines a Climate Change Counter movement CCCM as “a cultural contestation between a social movement advocating restrictions on carbon emissions and a counter movement opposed to such action”. This definition was used to identify “key organizations of the US CCCM.”

The article tackles the questions: How are these oganisations financially maintained? and How do these organisations and their funders interact to form a social movement?

The article is a heavy read and it is not suprising that media coverage has concentrated on the findings that 91 CCCM organizations have an annual income of over $900 million and the developing trend toward concealing sources of funding.

The article points out that many of these organisations have a number of roles and that most have multiple forms of funding. The study concerns itself with funding from 140 foundations that made grants to the 91 organisations.

The most well funded organisations are trade associations that are primarily funded by membership and for whom foundation funding is not relevant source of income. Charitable organisations and advocacy organisations however receive 25% and 14% respectively of their funding through foundation grants. More than a third of these organisations obtained more than 90% of their income from undisclosed sources.

The author states that “the foundations playing a major role in CCCM are well-known and prominent conservative funders”. The article goes on to look at the relationship between organizations and the foundations funding them.  It also notes the considerable increase in foundation funding being provided through untraceable sources.

Brulle concludes that “Clarifying the institutional dynamics of the CCCM can aid our understanding of how anthropogenic climate change has been turned into a controversy rather than a scientific fact on the US.”

I might also suggest that the article exposes the size of the political challenge for those wanting to see greater action from government.

Table 2: (below) Functions of corporate political myths regarding climate change was the “gulp” moment for me as I looked around at the ‘green’ products in my home, and realised I had embraced the myth of being a green consumer. 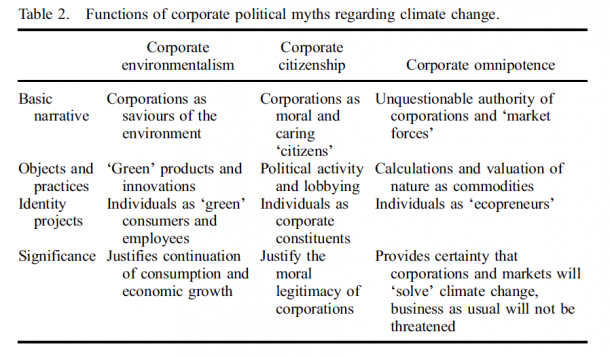 In their conclusions, the authors state: “We argue that the political myths we have identified create an appealing image of human progress that prevents any meaningful challenge to our current path. These myths support a common narrative; a social imaginary of capitalist‘ rationality’ and ‘ efficiency’, of human mastery over nature.”

Food for thought as you read the direct action green paper quietly released on Friday the 20th of December (or you could cheat and check out the ABC coverage).

For all those still raising the issues, thank you, and to make you smile check out this post on 2013 climate change champions and this late contender for the list. You may also want to check out Bob Douglas’ article in the  Age calling for  “brave leaders” in his coverage of new books by Ross Garnaut and Geoff Davies. I am sensing a theme.