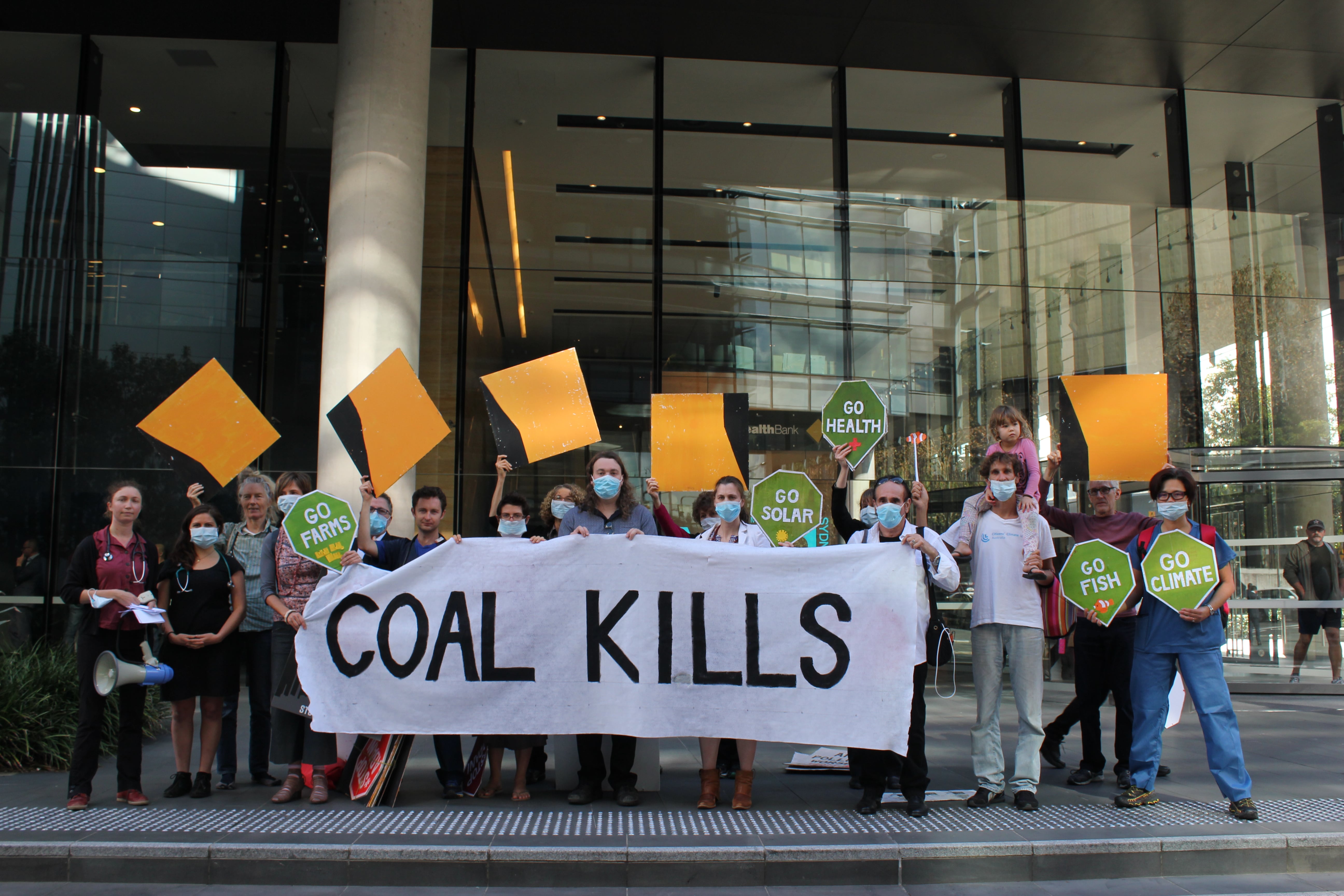 Doctors for the Environment Australia protest outside a Commonwealth Bank branch in Sydney, May 2017. Photo: Chris Ganora

Climate Council: climate, health and economics are against Carmichael mine

The Climate Council on Thursday released Risky Business: Health, climate and economic risks of the Carmichael coalmine which says that, if the proposed Galilee Basin mine were a country, it would rank in the top 15 worst emitting nations in the world.

Two of its authors, Emeritus Professor Will Steffen from the Fenner School of Environment and Society at the Australian National University and Professor Hilary Bambrick, from the School of Public Health and Social Work at Queensland University of Technology, outline the major risks, including to health, in the article below which was originally published at The Conversation.

They say that despite overwhelming evidence on climate, health and economic grounds against such a development, the Adani Carmichael mine “staggers on, zombie-like”, including with the latest reports it has been offered a deferment of A$320 million in royalty payments.

The launch of the report coincided with protest action by Doctors for the Environment Australia (DEA), who donned stethoscopes and surgical masks to deliver a letter highlighting the risks to health from the proposed Adani coal mine to the Commonwealth Bank’s Board of Directors in Sydney at the Darling Harbour branch.

DEA said the letter sought to highlight that:

DEA statement that action to protect Australia from climate change was a policy free zone in the 2017 Budget.

Despite the overwhelming evidence that fossil fuels are killing the Great Barrier Reef and making many extreme weather events worse; despite the emphatic thumbs-down from the finance sector; and despite the growing awareness of the serious health impacts of coal, the proposed Carmichael coal mine staggers on, zombie-like, amid reports it has been offered a deferment of A$320 million in royalty payments.

A new Climate Council report, Risky Business: Health, Climate and Economic Risks of the Carmichael Coalmine, makes an emphatic case against development of the proposed mine, or of any other coal deposits in Queensland’s Galilee Basin, or indeed elsewhere around the world.

Burning coal is a major contributor to climate change. Australia is already reeling from the escalating impacts of a warming climate. Heatwaves and other extreme weather events are worsening. The Great Barrier Reef has suffered consecutive mass bleaching events in 2016 and 2017. Climate change is likely making drought conditions worse in the agricultural belts of southwest and southeast Australia. Our coastal regions are increasingly exposed to erosion and flooding as sea level rises.

If we are to slow these disturbing trends and stabilise the climate at a level with which we might be able to cope, only a relatively small amount of the world’s remaining coal, oil and gas reserves can actually be used.

The majority must be left unburned in the ground, without developing vast new coal deposits such as those in the Galilee Basin.

The amount of fossil fuels we can burn for a given temperature target (such as the 1.5℃ and 2℃ targets of the Paris climate agreement) is known as the “carbon budget”.

To give ourselves just a 50% chance of staying within the 2℃ Paris target, we can burn only 38% of the world’s existing fossil fuel reserves. When this budget is apportioned among the various types of fossil fuels, coal is the big loser, because it is more emissions-intensive than other fuels. Nearly 90% of the world’s existing coal reserves must be left in the ground to stay within the 2℃ budget.

When the carbon budget is apportioned by region to maximise the economic benefit of the remaining budget, Australian coal in particular is a big loser. More than 95% of Australia’s existing coal reserves cannot be burned, and the development of new deposits, such as the Galilee Basin, is ruled out.

Exploiting coal is very harmful to human health, with serious impacts all the way through the process from mining to combustion. Recently the life-threatening “black lung” (coal workers’ pneumoconiosis) has re-emerged in Queensland, with 21 reported cases. Across Australia, the estimated costs of health damages associated with the combustion of coal amount to A$2.6 billion per year.

In India, the country to which coal from the proposed Carmichael mine would likely be exported, coal combustion already takes a heavy toll. An estimated 80,000-115,000 deaths, as well as 20 million cases of asthma, were attributed to pollutants emitted from coal-fired power stations in 2010-11. Up to 10,000 children under the age of five died because of coal pollution in 2012 alone.

Compared with the domestic coal resources in India, Carmichael coal will not reduce these health risks much at all. Galilee Basin coal is of poorer quality than that from other regions of Australia. Its estimated ash content of about 26% is double the Australian benchmark.

This is bad news for children in India or in any other country that ends up burning it.

The economic case for the Carmichael mine doesn’t stack up either. Converging global trends all point to rapidly reducing demand for coal.

The cost of renewable energy is plummeting, and efficient and increasingly affordable storage technologies are emerging. Coal demand in China is dropping as it ramps up the rollout of renewables. India is moving towards energy independence, and is eyeing its northern neighbour’s push towards renewables.

From any perspective – climate, health, economy – the proposed mine is hard to justify. And yet the project keeps on keeping on.

PrevPreviousThe Health Wrap: Budget fallout, #IHMayDay17, assisted dying and the cyber attack that shook the NHS
NextNew knee osteoarthritis standards & why not everyone needs inpatient rehab after a knee replacement. But who decides?Next