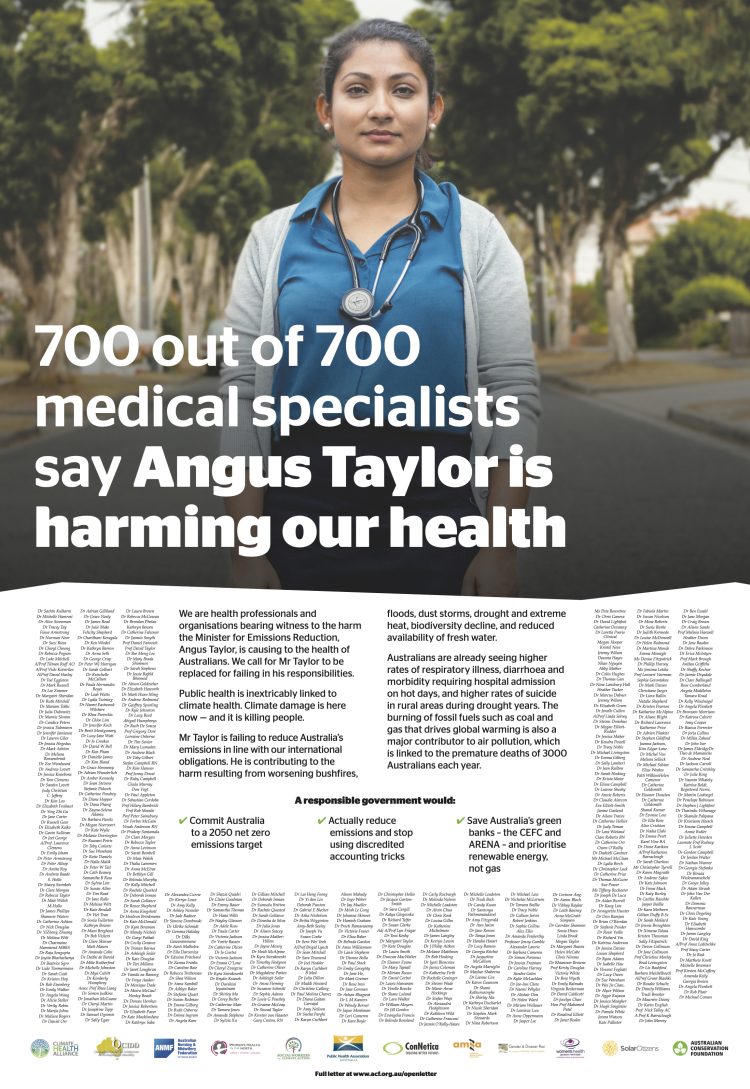 Introduction by Croakey: More than 700 Australian health care professionals have signed an open letter to Prime Minister Scott Morrison condemning his government’s failure to act on emissions and climate.

The letter, which was sent to the PM on Sunday afternoon and was published as a full page advertisement in The Australian today, says Minister for Emissions Reduction, Angus Taylor, is failing in his duties and, as a consequence, harming the health of the nation.

It follows the publication on Friday of the bushfires Royal Commission’s findings, a 600-page volume that warned starkly of a new era in disasters driven by our changing climate.

It also comes as international pressure mounts on the Australian government to act on emissions, with British Prime Minister Boris Johnson urging Morrison to commit to net zero in a call last week as Japan announced such plans, an element of their conversation that his office omitted from the transcript. At the same time, members of his government — including the deputy PM — lined up to criticise major bank ANZ for launching an emissions reduction policy.

Organisations to have signed onto the letter include the Public Health Association of Australia and the Australian Nursing and Midwifery Federation. It was coordinated by the Australian Conservation Foundation and the Climate and Health Alliance.

“We urge our political leaders to commit to urgent climate action by reducing greenhouse gas emissions in line with what the science demands.”

As Australia moves into another summer this is a crucial time for our government to show it is serious about climate change. At the moment, Australia is a global leader in per capita climate pollution. We urge Prime Minister Morrison to immediately replace Angus Taylor with a minister who is committed to the job of rapidly cutting emissions.”

The letter, which is available here, appears in full below.

We write to express our professional concern about the ramifications of the failure of the Hon Angus Taylor MP to fulfil his responsibilities of the office of the Minister for Emissions Reduction.

We are health professionals and organisations bearing witness to the harm Mr Taylor’s failure to reduce emissions is causing to the health of Australians. We are also united by our concern about the climate crisis and the impact it is having on the safety and wellbeing of Australians and our neighbours.

Public health is inextricably linked to climate health. Climate damage is here now — and it is killing people. In failing in his responsibilities to reduce emissions, Mr Taylor is contributing towards rather than reducing the harm the following is now causing:

There is already a noticeable impact from increased frequency and intensity of bushfires, floods, dust storms, drought and extreme heat, biodiversity decline, and over-allocation, reduced quality and increased salinisation of freshwater in Australia. As a result, Australians are already seeing higher rates of respiratory illness, diarrhoea and morbidity requiring hospital admission during hot days, and higher rates of suicide in rural areas during drought years.

The burning of fossil fuels such as coal and gas that drives global warming is also a major contributor to air pollution – this silent killer is linked to the premature deaths of 3,000 Australians each year. Higher levels of air pollution are also associated with increasing illness and death related to ischaemic heart disease, chronic obstructive airways disease, lung cancer and asthma, and also with adverse outcomes in pregnancy, including low birthweight and stillbirth. The annual cost to Australia from air pollution mortality alone is estimated to be $11.1- $24.3 billion.

Mr Taylor is failing in his ministerial duties in three critical ways:

1. Mr Taylor continues to allocate public money to gas and other polluting fossil fuel projects while overseeing a nationwide 50% decline in large-scale renewables investment from a record high in financial year 2018-19.

This sharp decline in investor confidence is largely due to the lack of coherent energy policy with targets to reduce emissions, and a failure to invest in upgrading transmission infrastructure to enable more renewable energy to connect to the national grid.

Mr Taylor is moving to amend the Clean Energy Finance Corporation (CEFC) Act to corrupt the clean energy mandate of Australia’s highly successful public ‘green bank’, change the definition of ‘low emissions’, and enable the CEFC to invest in new polluting gas projects. Under the changes, the Underwriting New Generation Investment scheme – including five short-listed gas projects – would be transferred to the CEFC.

2. Mr Taylor is failing to reduce Australia’s emissions in line with our international obligations.

Your government’s own projections show that Australia will not achieve its current emissions reduction targets of 26-28% below 2005 levels without further action. Australia needs to cut emissions further to play our part in holding warming well below 2°C and limiting it to 1.5°C.

Under Mr Taylor’s watch, there are no federal government targets or policies under which Australia’s emissions would be substantially reduced. There is no national strategy to transition Australia to a zero emissions economy that is able to create jobs, attract investment and generate opportunities in line with our commitments under the Paris Agreement.

3. Mr Taylor has failed to commit Australia to a 2050 net zero emissions target, isolating the federal government from its state counterparts, business, farmers, and civil society and Australia from the international community.

Every Australian state and territory government, major business and industry group, major civil society group and the national farmers’ body has committed to a net zero by 2050 target in line with the Paris Agreement. Under Mr Taylor’s watch, the federal government now stands alone in refusing to commit to this target. The lack of a target contributes to investment uncertainty.

Mr Taylor has overseen Australia’s use of ‘carryover credits’, a controversial accounting trick, at the 25th Conference of the Parties to the UNFCCC (CoP25) in Madrid. This significantly erodes Australia’s credibility in global efforts to tackle climate change.

Our recovery from the impacts of COVID-19 must recognise that human health, economic health and environmental health are closely connected. The pandemic compels us to pursue a recovery that strengthens our resilience to future shocks; to our collective health, to economic frailties and to extremes of weather. 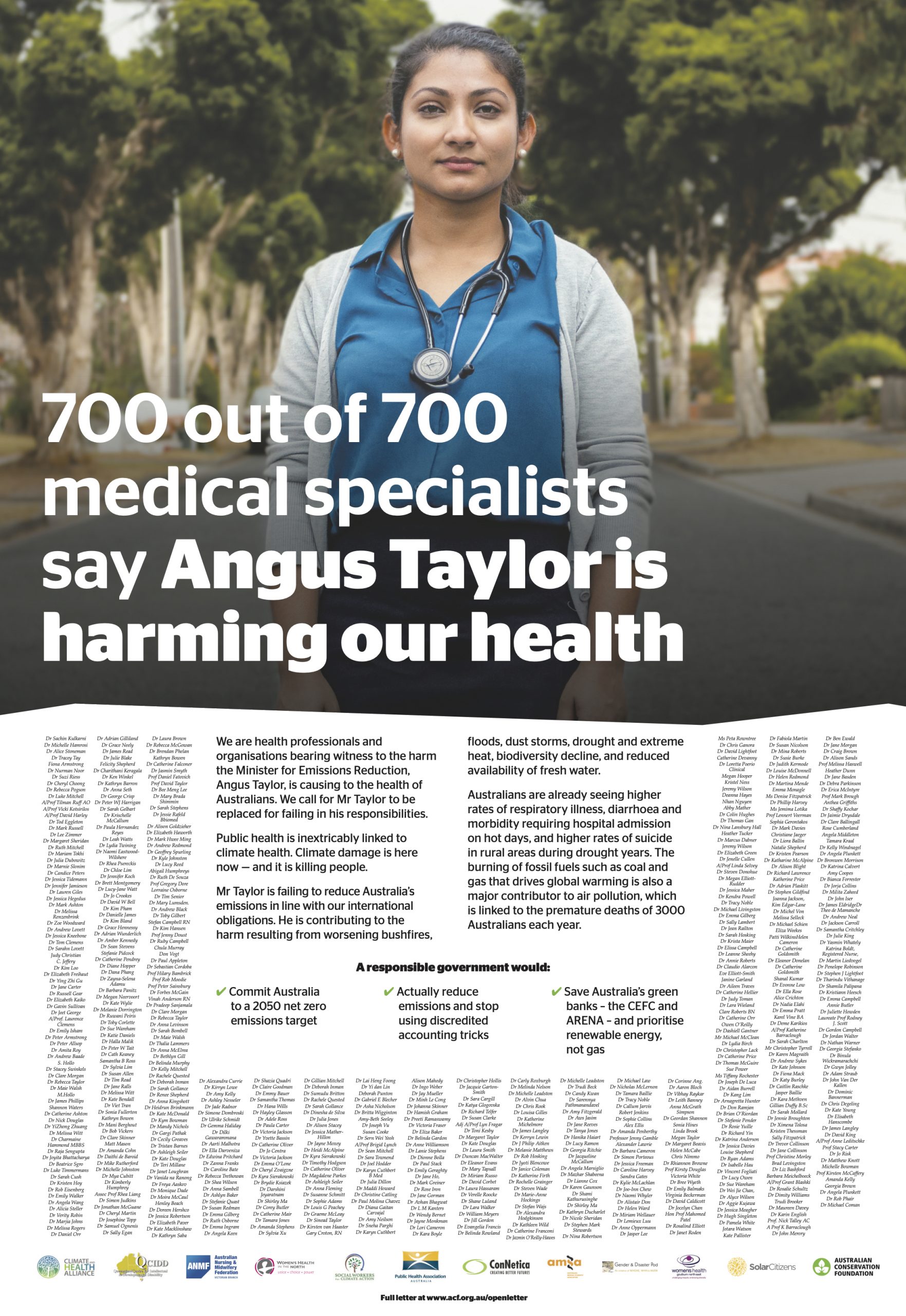 PrevPreviousHow political parties legally harvest your data and use it to bombard you with election spam
NextCauses of death data 2019: what does this mean for suicide prevention?Next