The Close the Gap Campaign has released its position paper on the Federal Budget 2015-16, calling on Government to restore cuts of up to $534.4 million over five years from the rationalisation of Indigenous Affairs programs, grants and activities administered by the Prime Minister and Cabinet and Health portfolios.

Here’s their media release and the full statement in the post below.

And other social and health policy priorities at stake:

ACOSS: Budget must not forget the unemployed: 83% don’t have enough to live on 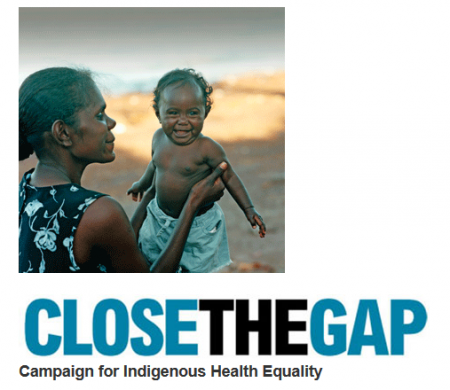 The Close the Gap Campaign believes that the Federal Budget 2015-16 should quarantine the Close the Gap funding against any further reductions and contain the following:

1)      Address the measures creating a potential negative impact on Closing the Gap from the Federal Budget 2014-15 including:

Restore the Close the Gap funding to previous levels

An estimated total of $270 million has been cut from what was previously committed for the next three years for Indigenous primary health care services and chronic disease self-management programmes. These cuts occur at a time when these services are starting to have an effect in helping close the health and life expectancy gap. Closing the Gap is a long-term objective and continuity of funding is vital for success, therefore funding needs to be restored to at least the previous level. The importance of smoking programmes and the effects of cuts are outlined below.

Restore cuts of up to $130 million over 5 years from the Tackling Indigenous Smoking programme. The ‘freeze’ on recruitment of staff to the Tackling Smoking and Healthy Lifestyle Teams, which are central to delivery of the programme, must be overturned. Following a review, the future shape of the programme is still to be announced.

There is a clear link between smoking and poor outcomes in birth weight, child mortality and life expectancy. The freeze on recruitment reduces the reach of the programme, undermines the momentum built to date, and erodes the programme’s goodwill developed with Aboriginal and Torres Strait Islander communities.

Revisit the decision to discontinue the National Indigenous Drug and Alcohol Committee, as the cost of the Committee is minor compared to its major impact on and relevance to major issues of importance to the health of Aboriginal and Torres Strait Islander peoples.

The creation of the Indigenous Australians’ Health Programme

The formula must be indexed for population growth and inflation, be geographically equitable and focus on areas with poor health outcomes and inadequate health services. Further, the evidence that demonstrates that ACCHS have inherent advantages as the provider of choice in terms of both better access and higher quality of service should be utilised in developing this funding allocation. New administrative mechanisms are required to ensure that Aboriginal and Torres Strait Islander peoples receive a share of mainstream programmes that is equitable in terms of their population size and programme need. Shortfalls are best redressed by directing funds to services which provide the best return on investment in terms of access and service quality – and the evidence is that ACCHS services generally outperform mainstream services.

The Campaign continues to be concerned about ‘mainstream’ measures flagged in the Budget 2014-15 that, if passed into law, may have a disproportionate impact on Aboriginal and Torres Strait Islander health. These include:

The Implementation Plan is capable of driving progress towards the provision of the best possible outcomes from investment in health and related services. As such the Federal Budget should:

3)      Building the capability of the ACCHS sector

The ACCHS sector provides inherent advantages for Closing the Gap. Firstly, its service model is the provision of comprehensive primary health care. This model of care is needed because of the higher levels of illness, earlier age of onset of illness, the much greater levels of comorbidity in Aboriginal and Torres Strait Islander people – and the need to address the fundamental determinants of health if the gap is to be closed.

ACCHS services were established because of the inability of mainstream services to deliver for Aboriginal and Torres Strait Islander people and have a critical role to play in closing the Gap. However, a long term plan for building the capabilities of ACCHS services is overdue. Such a plan should target areas with relatively poor health outcomes and insufficient or inadequate services and take into account capital costs for infrastructure and workforce development needs.

ACCHS representative bodies at the national and state level and national Aboriginal and Torres Strait Islander health workforce, research and healing and wellbeing organisations provide critical leadership in the health sector. These organisations are important change drivers for improving health outcomes and community empowerment. They also provide support and development for health professionals in front line services to improve access and health outcomes. Ongoing funding for these organisations is an essential component of the national effort to close the gap.

5)      Agreements with the states and territories

The Campaign Steering Committee believes there is a need for immediate Australian Government leadership to ensure a consistent national approach in the implementation of the Closing the Gap Strategy.

In this regard the Australian Government must work with States and Territories to forge new stronger and nationally consistent agreements (whether struck nationally or bilaterally) to continue the Closing the Gap Strategy.

Reinstate the $534.4million over five years cut from the Indigenous Affairs budget through programme rationalisation. The Campaign Steering Committee supports the reduction of red tape and duplication. However, the lack of detail how these cuts will apply and their impact on services and health outcomes is an ongoing concern. The Campaign is concerned that these cuts will have a negative impact on outcomes across the social determinants including education and employment outcomes.

The Campaign notes that the recent round of IAS funding has resulted in widespread distress in Aboriginal and Torres Strait Islander-controlled organisations for a variety of reasons:

The Campaign Steering Committee therefore calls on the Government to work with Aboriginal and Torres Strait Islander people and their representative organisations to address the concerns detailed above.

The Campaign Steering Committee is very concerned as to the announcement of potential closure of remote area Aboriginal communities in Western Australia as a consequence of the Federal Government reducing funding for basic infrastructure. This has clearly alarmed Aboriginal and Torres Strait Islander people throughout Western Australia and the nation as a whole. This policy, and the insecurity around IAS funding, is undermining the trust of Aboriginal and Torres Strait Islander peoples and is therefore putting the Federal Government’s Indigenous Affairs policy agenda at risk.

We therefore recommend that no action be taken until:

The Campaign Steering Committee is of the view that a proposal to move from five year census intervals to ten year census intervals will have deleterious effects on the availability of information for rural populations in general and Aboriginal and Torres Strait Islander people in particular. The proposed methods for provision of intercensal estimates through administrative datasets are likely to be unable to estimate the characteristics of scattered small populations. Further, administrative datasets for Aboriginal and Torres Strait Islander people are generally unreliable due to incomplete identification of Aboriginal and Torres Strait Islander people. This proposed change will have a major deleterious impact on the ability to monitor the effectiveness of the Implementation Plan for the Health, particularly since it is important in the early stage of implementation to have up-to-date information about which elements of the Health Plan are working satisfactorily, and which need further action.

The Campaign Steering Committee recommends that the impact of the proposal to move to a ten yearly census interval on the estimates for Aboriginal and Torres Strait Islander people be considered before any final decision is made on any change in the census frequency.

The Campaign Steering Committee believes that the Federal Government should move to a preferred provider contracting mechanism rather than competitive arrangements, both in general, and in relation to funding directed to Primary Health Networks. This should be guided by the evidence base that Aboriginal and Torres Strait Islander organisations provide the best value.

Current contracting processes have led to inefficient, inequitable and maldistributed health services. Evidence indicates that ACCHS outperform mainstream services in terms of identification of at risk patients and appropriate prevention and treatment. The Campaign Steering Committee recognises fiscal constraints of the budgetary environment and the important public policy principle that funds should be directed to services that will have the greatest impact in terms of access and quality (i.e. ACCHS). Administrative mechanisms for funding should support the achievement of best results and standard preferred provider mechanisms are appropriate for this purpose.

Further, bid driven processes perpetuate inequities and maldistribution when the focus needs to be on areas with relatively poor health and inadequate services. The Campaign Steering Committee believes that funding priority should be directed to services which can produce the best results (default being ACCHS unless convincing evidence that alternative arrangements can produce better results than through strengthening ACCHS).

The National Disability Insurance Scheme properly and equitably supports Aboriginal and Torres Strait Islander people with long term mental health conditions that qualify as a disability for the purposes of the scheme.

The Australian Government has committed approximately $18million to the implementation of the National Aboriginal and Torres Strait Islander Suicide Prevention Strategy. This funding commitment should be maintained and quarantined from any future budget cuts.