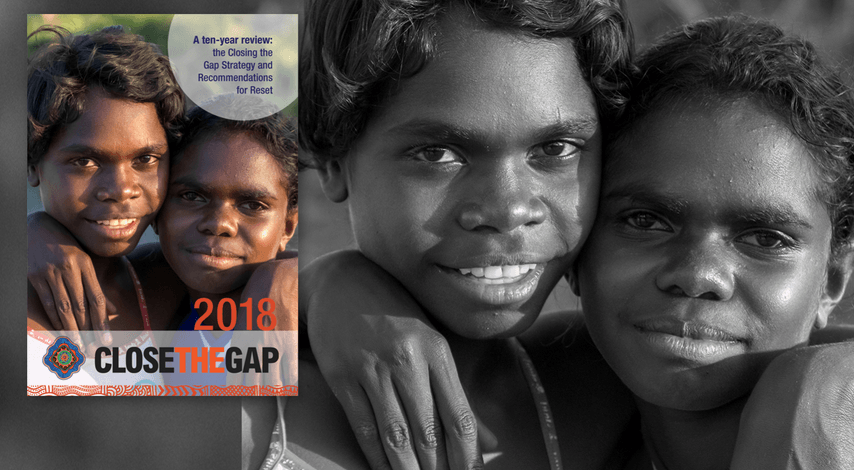 Cover image from the Close the Gap campaign's 10-year review of the Closing the Gap Strategy.

Ahead of the tabling to Parliament today by Prime Minister Malcolm Turnbull of the 2018 Closing the Gap report, the Close the Gap Campaign –  led by more than 40 Aboriginal and Torres Strait Islander and non-Indigenous health and human rights bodies – last week released its 10-year review of the Closing the Gap Strategy.

However the review says the Closing the Gap strategy, a 25 year program, was “effectively abandoned” after five years, with the architecture to support it (national approach, national leadership, funding agreements) having “unraveled” by 2014-15. It says:

“Without a recommitment to such ‘architecture’, the nation is now in a situation where the closing the gap targets will measure nothing but the collective failure of Australian governments to work together and to stay the course.”

It says that in practice, the Closing the Gap Strategy “persists in name only with the closing the gap targets being used to measure ‘national progress’ being pursued by fragmented jurisdictional efforts, with no national leadership”.This week will see a big spotlight on Indigenous health and wellbeing, through the Prime Minister’s statement and the 10 year anniversary, tomorrow, of the National Apology to the Stolen Generations.

Here’s a quick guide with links to some of the key reports and statements in the leadup.

You can read the full review by the Close the Gap campaign here: https://www.humanrights.gov.au/sites/default/files/document/publication/CTG_2018_FINAL_WEB.pdf  and the speech by Aboriginal and Torres Strait Islander Social Justice Commissioner June Oscar, from the event to launch the review last week, here: https://www.humanrights.gov.au/news/speeches/close-gap-2018-report-launch

Its five key findings and major recommendations are published below.

That includes increased funding for ACCHOs to expand in regions where there are low access to health services and high levels of disease, and in areas of mental health, disability services and aged care, and for areas where Aboriginal and Torres Strait Islander peoples have a high burden of disease or are particularly vulnerable, like ear health and renal disease , delivered through ACCHOs.

Last Friday, a group of prominent Aboriginal and Torres Strait Islanders were invited by the Federal, State and Territory governments to meet in conjunction with the first Council of Australian Governments (COAG) meeting of 2018 to provide advice on the Closing the Gap refres, which is currently underway. They issued a statement, saying the next phase of the Closing the Gap agenda must be guided by the principles of empowerment and self-determination, and calling for future targets to address:

On the weekend, Indigenous Health Minister Ken Wyatt announced that the latest round of funding for the Tackling Indigenous Smoking program had been extended from three to four years funding but concerns remain about the National Partnership on Remote Housing, which is expiring in June this year.

Wyatt suggested on Sunday that the government could still legislate an Indigenous voice to parliament outside the Constitution, backed by Chris Sarra, co-chair of the Prime Minister’s Indigenous Advisory Council, who said that a model to deliver Indigenous Australians a “voice” is still “very much” on the table in negotiations with the Turnbull Government.

Croakey will report later on the Prime Minister’s statement and responses from Indigenous health leaders and groups.

The Close the Gap campaign’s five major findings are: 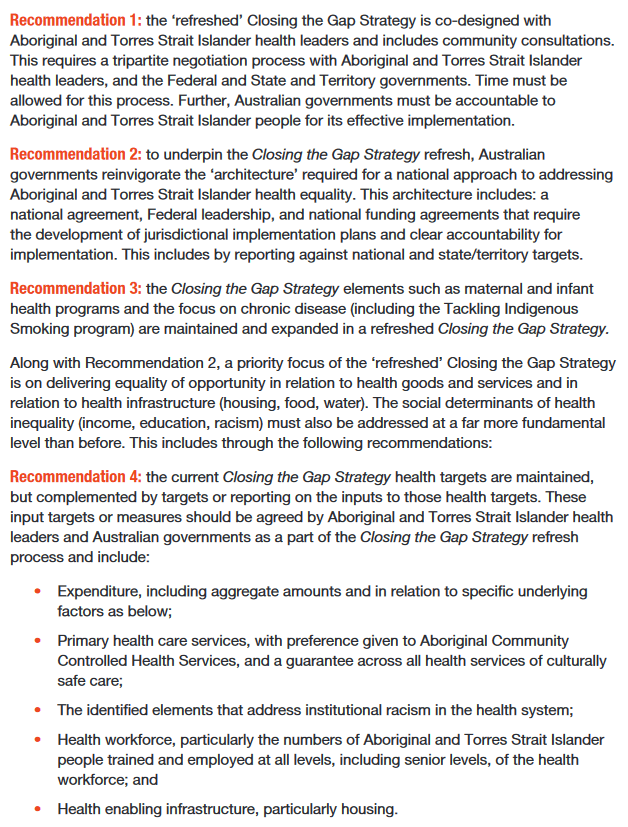 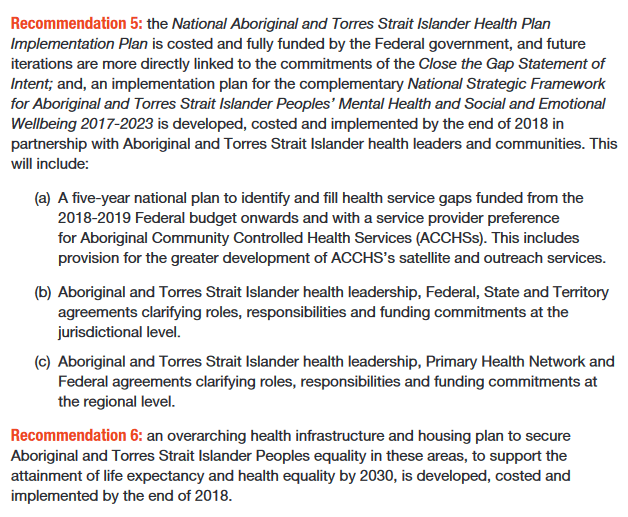