Today marks the end of an era, for many organisations, their employees and those who have relied upon or been part of their work.

“It has been a privilege to chair an organisation that has assisted governments to deliver major reforms that have greatly improved the lives of countless Australians.

The council has helped strengthen the performance and public accountability of governments and our recent five year review of the COAG reform agenda found significant progress has been achieved. Our reporting role has helped drive this success.

These reforms have resulted in Australians smoking less and living longer, more young people completing Year 12, a better-skilled workforce, more people with disability getting the help they need, better opportunities for Indigenous Australians and billions added to our economy through regulation reform and productivity improvements.

What was particularly special about the council is that we’ve reported independently on the progress of all nine of Australia’s governments—the Commonwealth, the States and the Territories—and that independence ensured we delivered impartial and objective reports to governments and the Australian public.

There is a strong role for performance reporting in our federation to drive accountability of governments, and I’m pleased to say that’s what the COAG Reform Council has done to date.

The White Paper on Reform of the Federation signals the next important phase for federal-state relations and is a good opportunity to prompt further debate about how our federation is structured.

The council is proud to have played a part in strengthening our federation and we are looking forward to seeing the outcomes of the White Paper process.

I am grateful for the contribution of our council members Greg Craven, Patricia Faulkner, John Langoulant, Sue Middleton, Kerry Schott and Mary Ann O’Loughlin. I would also like to acknowledge the contribution of our former councillors Geoff Gallop, Helen Silver, Doug McTaggart, Peter Corish and my predecessor as Chair, Paul McClintock.

I am fortunate to have had the opportunity to work with such professional, passionate and dedicated people—I say this of both members of the council, and its secretariat.”

As of today, Australian Medicare Local Alliance closes its doors following the Federal Government’s decision to no longer fund a national body for the nation’s 61 Medicare Locals.

AML Alliance Chair, Dr Arn Sprogis said that while the decision was disappointing, a new era for primary health care was emerging with the introduction of Primary Health Networks (PHNs) which will further cement the central role of organised primary health care in the overall health system.

“AML Alliance served its members well over its two years of operations leading, supporting and coordinating Medicare Locals throughout the transition from Divisions of General Practice through to a fully functioning, national network of 61 Medicare Locals,” Dr Sprogis said.

“As Chair of this organisation I have been privileged to work with professional health bodies, leading health advocacy groups and consumer organisations that have also shared in a vision for primary health care,” he said.

“I’d like to thank our stakeholders across the health and social care sectors that have engaged so well with AML Alliance and its members.

“As I look to the future, Medicare Locals and the people working within them are the regionally responsive and locally relevant agencies that are essential and central to translating the Government’s vision for primary health care through the PHNs. The organisational and human capital, skills and innovation embedded in existing Medicare Locals is a critical component for a successful PHN roll out and AML Alliance has played a key role in making this possible.

“Future health systems can only function efficiently, productively and provide high quality care if regional primary care systems are a key element and this will only occur if Medicare Locals build on their achievements and work with their partners in preparation for the PHN roll out later this year.

“The bottom line is keeping people well and out of hospital is the main game of cost savings for the health system and the focus and the momentum of primary health care must be rapidly scaled up and be given much greater emphasis to achieve this,” he said.

“Medicare Locals have demonstrated they have the people, the capacity and the track record to serve their communities, PHNs should build on this great asset for the benefit of all.

“As of today, some of AML Alliance’s functions will transfer to the Department of Health. For further information regarding Medicare Locals nationally, please contact the Federal Health Department
(02) 6289 1555,” Dr Sprogis said.

Many other organisations are also closing or wondering how their futures will pan out. Perhaps this tweet from rural health advocate Alison Fairleigh is a sign of things to come. 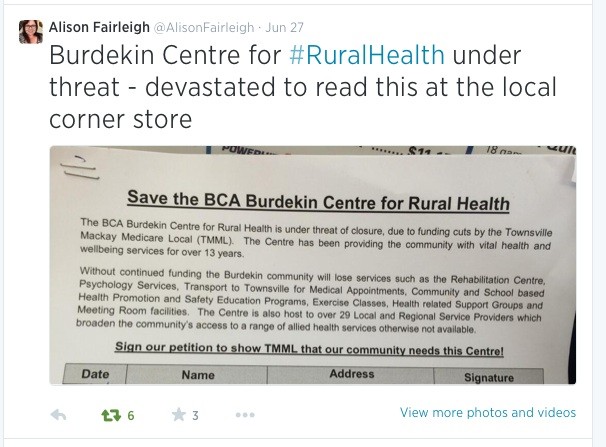 Statement from Awabakal, one of Australia’s largest and oldest Aboriginal Co-operatives.

In the first real indicator of the pain this budget will unleash on the public, the program which was created by the Institute of Urban Indigenous Health focusing on educating and empowering young Aboriginal people to make healthy choices in order to avoid long term health issues, will no longer be offered to Aboriginal youngsters across the Hunter.

“This is a significant blow to our local efforts to closing the health gap, Mr MacAskill said.

“This program directly targets young Aboriginal people and educates them about how the choices they make today in terms of diet, exercise and smoking, will impact their health in the longer term.”

The program has several key areas with the healthy lifestyle workers visiting schools, hosting community days and running health and fitness programs for Aboriginal people in the area.

“Awabakal’s Deadly Choices program concentrates on preventative health measures such as healthy diet and exercise, as well the importance of quitting smoking, he said.

“Our people have the highest and most rapidly increasing rates of chronic illnesses such as cancer and diabetes, and this program directly targets the root contributors to those illnesses.”

“We have just begun seeing some really good results coming out of this program. More people are undergoing health checks at our Primary Health Care Centre, and more people are taking responsibility for their own health, Mr MacAskill said.

The first round of the Indigi Fit program started a month ago and is teaching 19 Aboriginal people how to exercise and eat right. It also has a waiting list for the next four rounds.

“These are people who have been empowered and supported by the healthy lifestyle team to care for their own health. To them and to this community, this program is vital, he said.

“Those 19 people take their knowledge into their homes and teach their family and friends about nutrition and exercise. It’s a knock-on effect that is critical to helping our community.”

The Liberal Government has not yet shared definitive end dates for the project funding and has not supplied any information past June 30, 2014 including new funding agreements.

“The Liberal Government has treated us with contempt. They will give us no information regarding the continuation of this program past June 30 and we are aware of several other Aboriginal Medical Services that are in the same boat in regards to funding agreements, Mr MacAskill said.

“I have dedicated people who work in these programs who deserve certainty, and while the government refuses to engage with us and give us answers, I have had no choice but to end the program. There simply isn’t any funding for it.”

• An award-winning counselling service for Aboriginal substance abusers in South Australia has suddenly had its federal funding cut: SBS report

PrevPreviousWhat does the Mental Health Council of Australia think of the direction of welfare reforms?
NextStories from the frontline about impacts of co-payments upon Aboriginal health and servicesNext