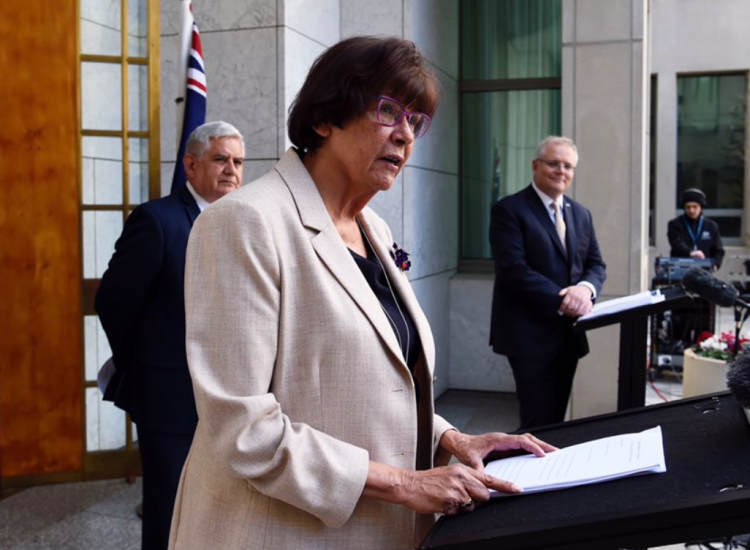 The landmark Closing the Gap National Agreement was released on Thursday, offering a “turning point” in the relationship between Aboriginal and Torres Strait Islander people and governments and unprecedented accountability in how its new targets are addressed.

Turner is chair of the Coalition of Peaks – 51 Aboriginal and Torres Strait Islander organisations that have negotiated the agreement with Federal, State, Territory and local governments over the past two years after Prime Minister Scott Morrison conceded the previous Closing the Gap strategy had failed because it was not led by Aboriginal and Torres Strait Islander people.

The 46-page National Agreement on Closing the Gap delivers a comprehensive set of commitments from government that places Aboriginal community controlled organisations “at the centre”, Turner told a joint media conference with Morrison and the Minister for Indigenous Australians Ken Wyatt.

For the first time, it includes targets for reducing rates of Indigenous incarceration, children living in out of home care, overcrowded housing, suicides, and family violence, as well as focusing on critical strengths through connection to Country and language.

“The Council of Peaks is confident that the national agreement, if fully implemented, has the potential to establish a strong policy foundation for what needed to make a difference,” she said.

Referring to concerns and criticisms that some targets are not ambitious enough, particularly those on over-incarceration of Aboriginal and Torres Strait Islander people, Turner said the agreement “may not include everything our people want or need to make a lasting change to our lives, but this is a huge step forward.”

It was “the first time ever” that an agreement has been negotiated by the former Council of Australian Governments “with an outside party”’, she said, adding: “I’m glad it’s First Nations people who have got that.”

Morrison said the previous Closing the Gap strategy, begun under Labor Prime Minister Kevin Rudd in 2009, had been worthy and deserved credit, but its approach was misguided. 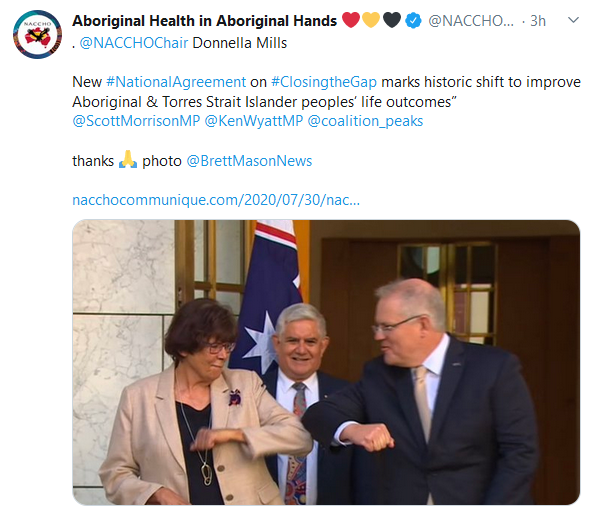 The National Agreement lays out 16 new national socio-economic targets in areas including education, employment, health and wellbeing, justice, safety, housing, land and waters, and Aboriginal and Torres Strait Islander languages, versus the eight targets in the previous Closing the Gap strategy. 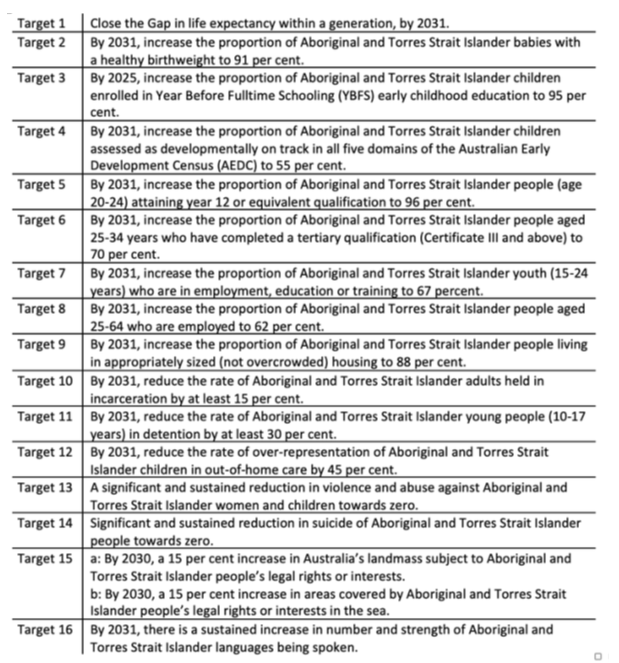 But Turner has long said that the targets are not the main point of this new agreement, though they measure government “ambition”.

She said it is the four priority reform areas adopted, including – for the first time under Closing the Gap — a commitment to fight structural racism that are “the game changers”, committing governments to: 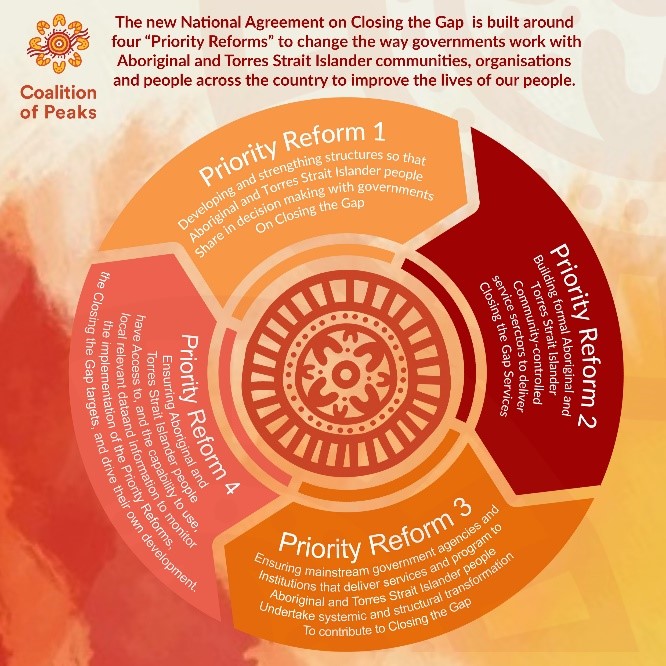 The new agreement was widely welcomed by many leading Aboriginal and Torres Strait Islander groups, including NACCHO, SNAICC, and Aboriginal Peak Organisations Northern Territory (APO NT), as well as mainstream organisations like the Australian Medical Association.

Aboriginal and Torres Strait Islander Social Justice Commissioner June Oscar, who is co-chair of the Close the Gap Campaign, which preceded Closing the Gap, commended the hard work of the Coalition of Peaks and the Commonwealth in delivering it.

However, there was caution about whether governments will deliver the necessary funding (“It’s not about buckets of money,” Morrison said) and deep disappointment from a number of groups about the justice target, which seeks only to reduce overincarceration of adults by 15 per cent by 2031, meaning it does not aim for parity with non-Indigenous Australians until 2093 – generations away.

This showed a “disappointing lack of ambition”, said the National Aboriginal and Torres Strait Islander Legal Services (NATSILS), which had urged parity for both adults and children within ten years and was this week “deeply distressed” by the third Aboriginal death in custody in two months.

“If we are equal partners in this Agreement, why is our expert advice being ignored by governments when they know our lives are on the line?” asked NATSILS co-chair Cheryl Axleby, saying the toll of the past 30 years meant Aboriginal and Torres Strait Islander people could be “looking at the potential of 1,100 more black deaths in custody by the Governments’ 2093 parity date”.

“This is unacceptable and shows governments’ complete disregard for the lives of Aboriginal and Torres Strait Islander people,” she said.

Like a number of Indigenous and non-Indigenous groups she warned of government actions that work actively against key targets, such as the failure earlier this week in the decision of federal, state and territory Attorneys General to postpone for another year a decision on raising the age of criminal responsibility from 10 to 14.

“This would have immediately reduced the over-incarceration of our children,” she said.

AMA President Dr Tony Bartone agreed. “I don’t know why they failed to act,” he said in a statement.

Welcoming the overall agreement, Bartone “wholeheartedly” endorsed the commitment to reduce institutional racism in mainstream organisations, saying the AMA will “do its bit” to tackle and rid the health system of all forms of discrimination.

However, while being “cautiously optimistic” that governments will hold up their end of the bargain and fully implement the actions under this new Agreement, he said “best intentions will not work without sustainable, guaranteed funding for programs and services”.

“No new funding was announced, yet funding is key to meeting these new targets,” he said, calling for early commitment to maternal health services as “one of the best ways to ensure a best start to a long life”.

As well as also being disappointed about the justice targets, the Aboriginal-led National Family Violence Prevention and Legal Services Forum warned it was “standing firm on  the  need  for  a  strong,  ambitious, numerical  target  to  end  family  violence  against  Aboriginal  and  Torres  Strait  Islander  people – particularly our women and their children”.

Turner and Wyatt said senior Aboriginal women “have asked we do more work on that”.

Others groups, many among them members of the Coalition of Peaks, welcomed the agreement as “momentous” but warned that governments need to be accountable and to work to address the social determinants of health issues behind poorer health outcomes for  Aboriginal and Torres Strait Islander people,

Opposition Minister for Indigenous Australians Linda Burney was particularly pleased to see targets that “go to First People’s relationship with land, with water and with culture, (and) in  particular, language”.

But what was required now was leadership, innovation, action, a real sense of urgency and, “critically, funding and commitment from all levels of government”, particularly to address issues like housing, and clean water and affordable food in remote communities.

NACCHO chair Donnella Mills said the Agreement commits governments and the Coalition of Peaks to building strong Aboriginal and Torres Strait Islander community-controlled sectors and organisations to deliver Closing the Gap services and programs, with the first four sector strengthening plans to be developed for early childhood care and development, housing, health, and disability within 12 months.

Having Aboriginal community controlled organisations at the heart of the Closing the Gap process, at the strategic level and on the ground, was vital because “they get better outcomes and they employ more Aboriginal and Torres Strait Islander people”, said NACCHO chair Donella Mills.

The Australian Indigenous Doctors Association (AIDA) also welcomed the Agreement, saying it “brings the most accountability we’ve seen in an agreement affecting the governments’ treatment of First Nations’ Peoples”.

“By attaching real targets to these priority reforms and involving Aboriginal and Torres Strait Islander people in the review process the effectiveness of programs targeting health outcomes for our Peoples can be measured,” AIDA President Dr Kris Rallah-Baker said.

Croakey will add more statements as they come. 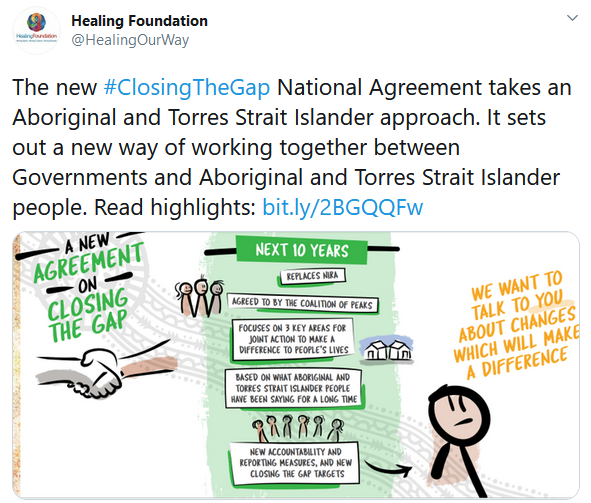 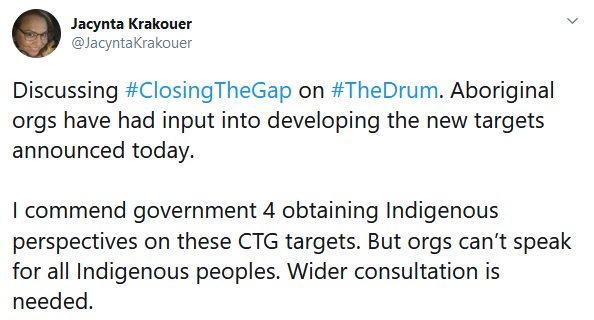 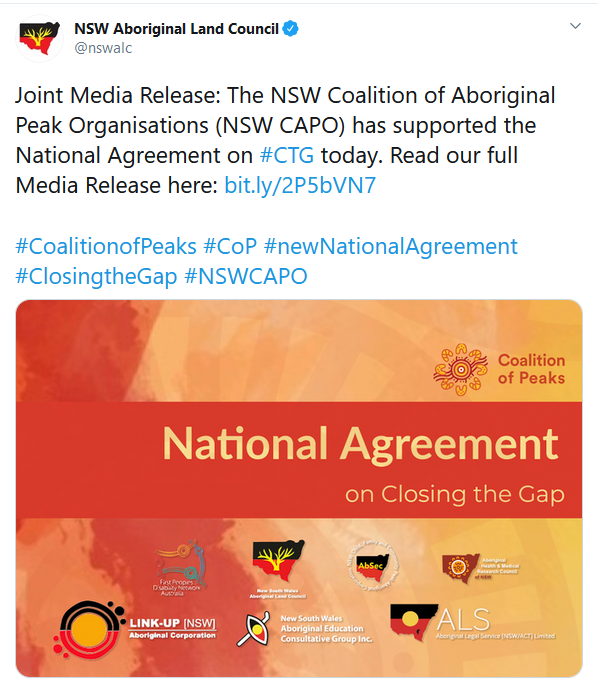 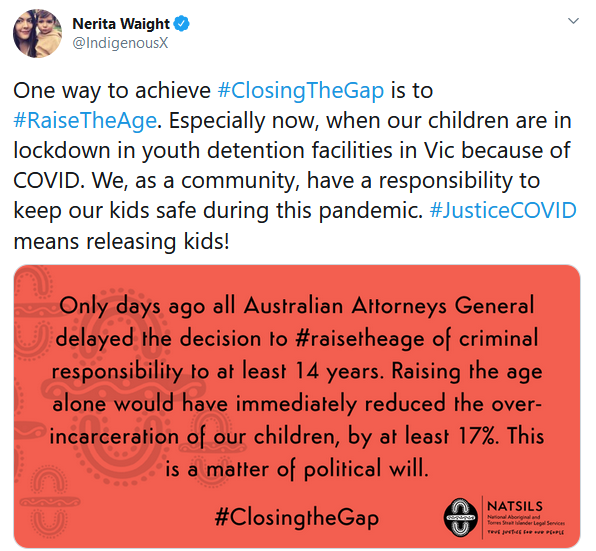 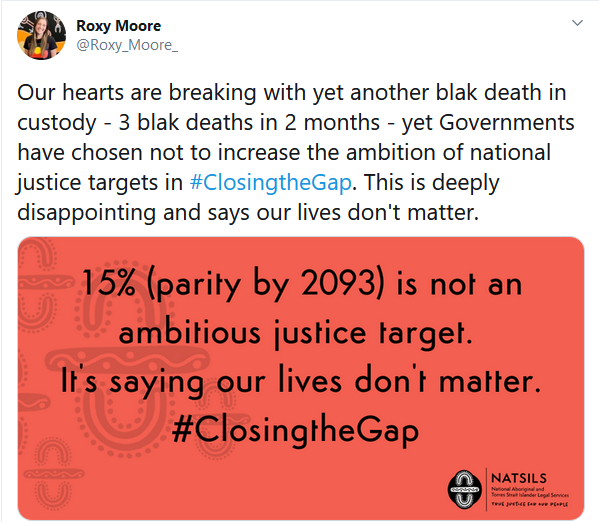