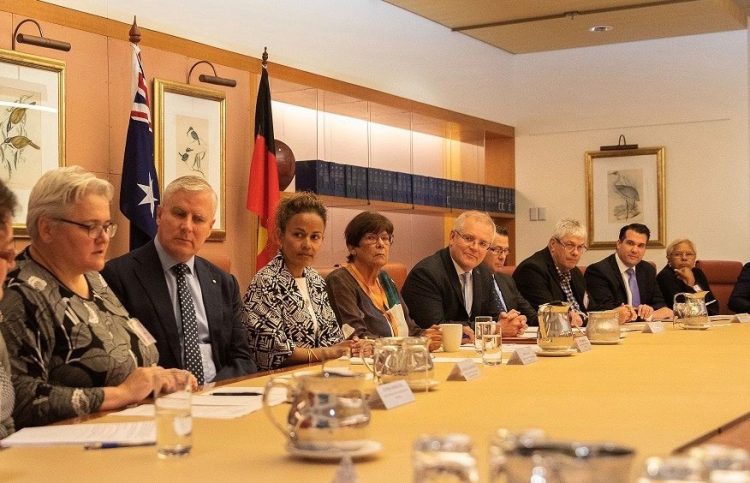 In handing down the Federal Government’s Closing the Gap Implementation plan in Parliament yesterday, Prime Minister Scott Morrison acknowledged the importance of the cultural determinants of health.

Croakey editor Dr Amy Coopes reports on what the plan brings, as well as what is missing.

Aboriginal and Torres Strait Islander groups have welcomed the release of the Federal Government’s Closing the Gap Implementation plan as overdue on addressing the many disparities in health and welfare for First Nations people.

However, they have also warned that it remains empty rhetoric until accompanied by meaningful action.

The centrepiece of the $1.1 billion plan is a $379 million compensation scheme for around 3,600 survivors of the Stolen Generations in the Northern Territory and Australian Capital Territory and $254 million to overhaul or build new clinics and associated housing for health workers in the community-controlled sector.

Morrison said it marked a significant departure in how things were done, decentralising responsibility for actions and plans to the states and territories, as well as to the Coalition of Peaks (https://coalitionofpeaks.org.au/) – the representative body which had brokered the new Closing the Gap agreement with the Federal Government.

Progress would continue to be reported by the Commonwealth, but the 17 socioeconomic  outcomes and four priority reforms would be tracked and presented annually by the Productivity Commission, with a triennial independent review.

“What makes this extremely unique is that every word and every paragraph has been jointly negotiated and agreed to by the 51 peak organisations, our Government; every state and territory government, including ministers, officials; and in the sign-off by National Cabinet endorsing the approach and endorsing the 17 targets that are in there that we will all work collectively to report on, and to make achievements and gains against each of those targets. It’s always been the Commonwealth that has reported in the past, using aggregated data. This time, what we’ve done is state and territory parliaments will now report on these targets within their parliaments, within their jurisdictions. Substantial difference.”

Overall, Morrison said, it would be a “far more rigorous assessment”, though others – including Lowitja Institute CEO Dr Janine Mohamed – took a more pragmatic stance.

“Obviously we welcome progress, but it’s going to be some time before we see the impacts of this announcement, and what’s greatly needed is support for priority reform four, which is data development, or else we won’t be able to track progress,” said Mohamed, who explored this issue in depth in a piece for Croakey this week.

“Money is fantastic but if it isn’t put in the right places and implemented, well then we’re not going to see the results we think we should get,” she said, adding that “the proof will be in the pudding”.

“They’re all just words until we implement them, and then, until we measure.”

Pat Turner from the Coalition of Peaks hailed it as an “historic day” of partnership, commending the Federal Government for “taking a significant step forward in making commitments a reality”. She paid specific tribute to the Stolen Generations redress scheme, something she said “our people have waited a long time for”.

“It is important recognition,” Turner said. “There are many survivors that have died waiting for this recognition, my mum being one of them.”

We have a long way to go to seeing improvements in the lives of our people across the country, and for the gap of life outcomes to be closed. But this is an important step forward. The Coalition of Peaks will be working with governments over the next 10 years to make sure that we do all we can for our peoples and ensure the full, full implementation of the national agreement.”

Morrison emphasised a focus on Indigenous capacity-building, pointing to the outstanding successes of the Aboriginal Community Controlled Health sector during COVID-19 – “nothing short of extraordinary” – with Indigenous Australians six times less likely to contract the virus and not a single death recorded or case reported from a remote community.

Morrison said this was “one of the most significant pandemic achievements Australia has had.” 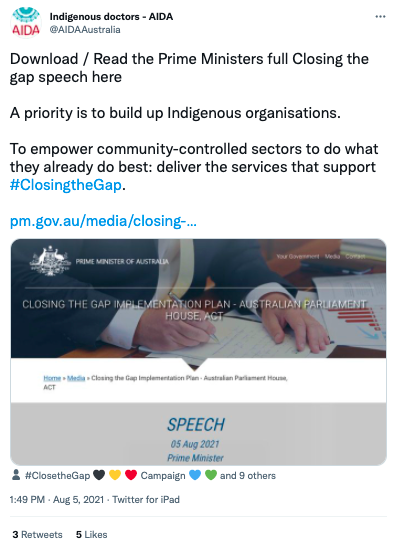 He also said the Government would seek to understand, “in detail, how our systems can knowingly or otherwise perpetuate racism”, adding that the “new chapter of Closing the Gap simply won’t succeed without” addressing this issue.

To this end, he said “our deeds must continue to match our words” when it came to the legacies of the past, with a redress scheme to address the “shameful chapter in our national story” of the Stolen Generations. This scheme would offer a one-off payment ($82,000) opportunity to tell their story to a ‘senior official within government’ and receive a written apology, to survivors removed as children from their families in former Commonwealth territories (the NT, ACT and Jervis Bay Territory).

Rather than a national scheme under the aegis of a formal truth-telling body, as laid out in the Uluru Statement, Morrison said the “states would manage arrangements in their own jurisdictions”, with the federal redress scheme only applying to Federal territories. It would open to applications in March 2022 and close in June 2026.

“This is a long-called-for step, recognising the bond between healing, dignity, and the health and wellbeing of members of the Stolen Generations, their families and their communities. To say formally not just that we’re deeply sorry for what happened, but that we will take responsibility for it,” Morrison told Parliament.

It was part of what he described as a new appreciation by government of the cultural determinants of health, where “a person’s sense of community and culture is inherently bound to their physical and emotional wellbeing. It’s bound to their dignity as a human.”

But the plan – a string of announceables that were heavy on rhetoric but light on substance – was perhaps most notable for the elephants in the room it failed to engage: Constitutional recognition, raising the age of criminal responsibility and a Marakarrata commission.

“There actually are some pieces of work that need to be done that don’t require money, like raising the age and a truth and reconciliation commission,” said Mohamed, adding that while the Uluru agenda continued to be eschewed Aboriginal and Torres Strait Islander peoples would never truly have a seat at the table.

This was echoed by many others including Wamba Wamba lawyer Eddie Synot, who said “without serious structural reform” the Government’s plans and commitments would be meaningless.

“For all of the PR about learning from the past and reforming processes, here we go again. Facing a status quo that’s been tinkered with and spruiked as a new deal,” Synot wrote on Twitter.

The Change the Record Coalition welcomed the implementation plan but said its aspirations would only be realised with consistent leadership, commitment to justice reinvestment, raising the age of criminal responsibility, independent oversight of police and prisons and full funding of family and domestic violence services.

“Change the Record welcomes the additional funding announced for complex legal cases and coronial inquests for Aboriginal Legal Services. However, this funding is the bare minimum required to respond to the huge need in our community for legal assistance. Driving down the number of our people who are forced into the criminal legal system will require state, territory and Commonwealth leadership,” said co-chair Cheryl Axleby. 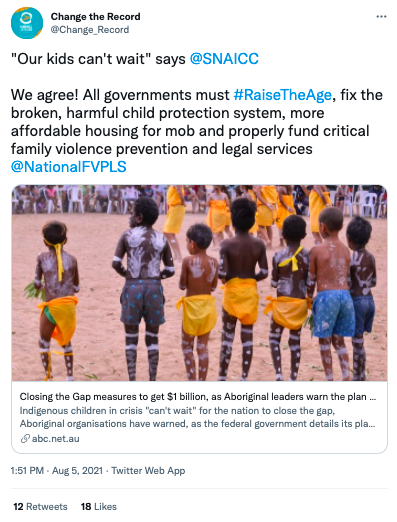 Fiona Cornforth from the Healing Foundation said while reparations were important “it’s not everything.”

“It won’t provide that end state of a healed nation, but there is hope in the priority reforms under the national agreement,” she said.

Read the Prime Minster’s speech, the full Closing the Gap Implementation Plan, and the implementation plan from the Coalition of Peaks.

PrevPreviousRites of passage: a case study in knowledge translation
NextAustralia’s vaccination plan is six months too late and a masterclass in jargonNext