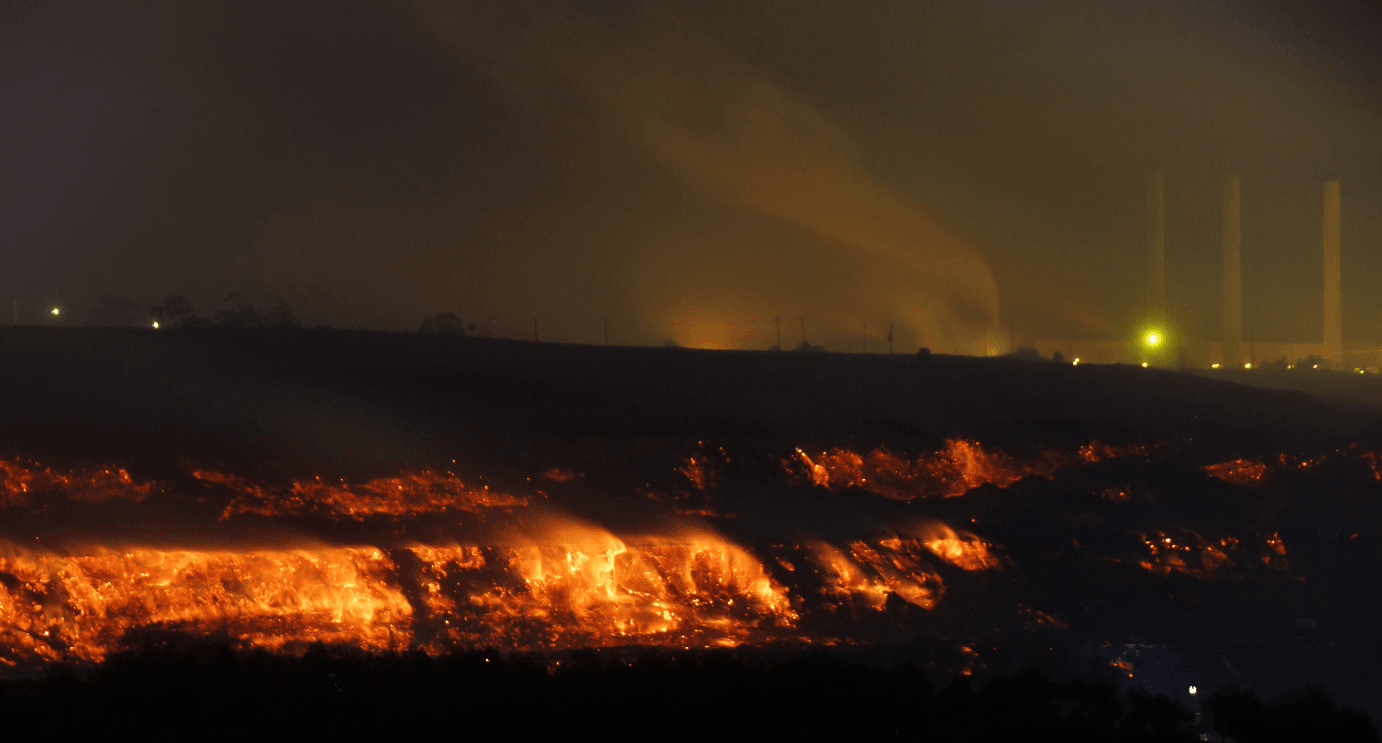 Led by Healthy Futures, Climate and Health Alliance and Doctors for the Environement Australia, more than 300 doctors doctors, nurses and other health-care workers have signed an open letter urging the Victorian government to include steps in its forthcoming Renewable Energy Action Plan to start the closure process of the polluting coal-fired power stations in the Latrobe Valley, beginning with Hazelwood which is the most inefficient power station in Australia. They presented the letter to the Premier’s office today at Parliament House. See the story in today’s The Age, and their post below.

The health risks of coal mines were appallingly evident in Victoria with the 2104 Hazelwood coalmine fire, which began on 9 February 2014 and burned for 45 days, sending smoke and ash over the town of Morwell in Victoria’s Latrobe Valley. It became a major issue in the 2014 State election and led to the new Andrews Labor Government re-opening the mine fire inquiry to examine whether it caused premature deaths in the area and announcing new funding to implement all recommendations of the original inquiry.

Meanwhile, the Thoracic Society of Australia and New Zealand is sounding the alarm about the lack of clear and concerted action nationally on Coal Workers Pneumoconiosis (CWP), or Black Lung. In the first post below, TSANZ President Professor Peter Gibson says we are placing our miners at undue risk. He reports on recommendations for action which were formally adopted during the TSANZ Annual General Meeting at the weekend.

Croakey readers may also be interested in this Sydney Morning Herald article saying Adani’s Carmichael mine “is just not going to happen“. It quotes the head of China’s State Grid Corporation as saying a fundamental solution to address power needs and climate change “is to accelerate clean energy” and that the eventual aim is “replacing coal and oil”.

The recent re-emergence of Coal Workers Pneumoconiosis (CWP) in Queensland – colloquially known as Black Lung – should be setting off alarm bells for federal government and the mining industry alike. As both the President of the Thoracic Society of Australia and NZ and a respiratory physician I am deeply concerned.

Firstly, we are completely unable to say if people in other states and territories are affected by the disease. As ludicrous as it sounds, we simply don’t have the data. Although the World Health Organisation recommends all workers exposed to coal and silica dust undergo lifelong health surveillance including a baseline assessment (with chest X-ray) prior to the commencement of work with follow-up chest X-rays every 2-5 years, in Australia, the lung health safety of our miners is handled differently in different states. It appears some miners may not have been x-rayed at all, while others inconsistently.  With many records held by employers, getting any kind of overview is near impossible.

Not being able to know how many Australian miners are carrying a potentially fatal disease is clearly unacceptable.

Secondly, we don’t even know if the measures we have in place to prevent the disease in the first place are up to scratch.

Once again, standards vary from state to state, with employers often responsible for determining implementation. In Queensland the standard is 3.0 mg/m3 while in New South Wales it is 2.5 mg/m3.  The Australian Institute of Occupational Health has recommended that dust limits be reduced to 1.0 mg/m3.  We believe it may need to be even lower.

What we can say with certainty, however, is that these limits offer coal miners less protection than standards in other countries where CWP is making a comeback. In the US, the standard is only 1.5 mg/m3 – more rigorous than Australia – and yet cases of CWP are increasing.

And we are not even sure how well these standards – already thought to be inadequate – are actually being adhered to, with worrying reports of poor compliance nationwide.

The overall picture is one of inconsistencies, outdated standards, poor compliance and a woefully inadequate screening process.  We are placing our miners at undue risk.

We must scrap the current the state-by-state approach and introduce new, national mechanisms to prevent and detect the disease, based on latest international evidence.

As the peak body representing all health professionals concerned with preventing, curing and relieving disability caused by lung disease, we are calling for:

We need consistent, nation-wide action to protect workers from Coal Workers Pneumoconiosis and other lung diseases caused by workplace exposures. CWP is an entirely preventable disease that should not be occurring in modern Australia. Action is required to improve detection and prevention but these measures will require funding and to be effective, must be applied nationally.

Coal is one of the major drivers of global warming, and a major source of Australia’s greenhouse gas emissions since most of Australia’s electricity is produced from burning coal.

Global warming is seen as a major threat to human health, both directly through the effects of bush fires and storms, and indirectly through interference with food production, sanitation, biodiversity and the psycho-social effects of crop failure and loss of arable land. And now reports of severe and largely irreversible bleaching of much of our Great Barrier Reef highlight the widespread destructive and adverse socio-economic effects that will occur from global warming.

The Victorian government has made many positive overtures in the last two years to tackle carbon emissions from coal combustion and vehicles, which together make up over three quarters of our green-house gas emissions. In its Renewable Energy Roadmap last year, it declared that it would re-establish Victoria as a global leader in renewable energy development. Supporting the renewable energy industry would promote, research, innovation and enable job creation, whilst also contributing to improved public health. Economists have repeatedly assessed that the earlier the action, the more we save in the long run.

And yet we are still awaiting the subsequent plans and action.

Recent reports have highlighted the sense of urgency that is now required. Last month, NASA declared that February 2016 was the hottest month globally on record. Although there was a contribution from El Nino, global warming was the main cause, according to climatologist, Professor David Karoly. This observation follows in the wake of the last five years being the hottest 5- year period on record.

So, what have Australia and Victoria been doing to fulfil the pledges made in Paris last year to limit global warming to 2 degree C and, if possible to 1.5 degree C?

It appears little. Climate scientists now believe that we have probably already used our carbon “budget” to keep global temperatures below the 1.5 degree limit, so when will we make inroads into a meaningful reduction in carbon emissions?  It is absolutely clear that we must start to enunciate practical plans as soon as possible. Even the recent report by the Independent Reviewers of the Climate Change Act 2010 proposed time-frames which failed to recognize the urgency of the current position.

As well as the global problem, health professionals are concerned at the continued adverse health effects of pollution on residents of the Latrobe Valley. These effects were identified in the reports following the two Inquiries into the Hazelwood coal-mine fire which devastated Morwell in early 2014.

Residents of the Latrobe Valley already have a reduced life-expectancy compared with those in other regions in Gippsland and with Victorians overall, although other complex socio-economic factors also play a role. In the second report, the Board recognised that transition away from coal-fired power generation was inevitable and that continuing uncertainty about this transition was detrimental to the health and well-being of the community. The Board proposed that the Latrobe Valley could be developed as a power generating centre for the state, but from renewable sources. This would give the community secure employment opportunities and a chance to regain its economic strength. The report also pointed out that planning for transition was essential in order to remedy the disillusionment created by privatisation of the power companies years ago.

Community leaders in the Latrobe Valley are also anxious for planning to commence. Voices of the Valley, a community organisation, has highlighted that the polluting power companies have lost their social licence to operate, not only as a result of the Hazelwood fire but also over the years with loss of job opportunities and community support. This organisation has been seeking positive planning for transition ever since the Hazelwood mine fire, and a local worker co-operative has anticipated the way of the future and already established a small renewable energy industry.

The Victorian government’s needs to work with the Latrobe Valley community and local companies and urgently commence steps to establish the Latrobe Valley’s alternative industries including developing it as a renewable energy generating centre for Victoria and beyond.

Professor Peter Brooks is Professorial Fellow at the Centre for Health Policy- School of Population and Global Health University of Melbourne, and member of Doctors for the Environment Australia

Fiona Armstrong is Executive Director of the Climate and Health Alliance

You can see the content and signatories of the open letter here: http://www.healthyfutures.net.au/just_transition

PrevPreviousMore support needed for Aboriginal youth in contact with juvenile justice in SA
NextMarking public health week with new warnings on climate change: the US, that is, not AustraliaNext