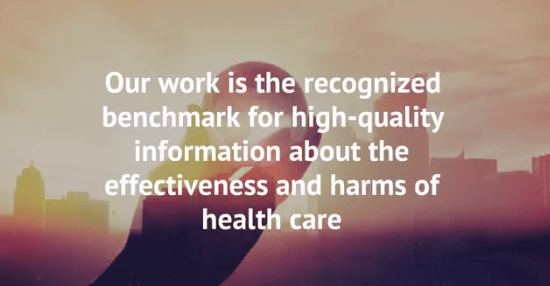 The Cochrane Collaboration is a respected, independent, not-for-profit international organisation (with a base in Australia) that is hailed for its mission to provide trusted health information via systematic reviews that are free from commercial sponsorship and other conflicts of interest.

This week many in the health and medical research sector have been rocked by news emerging from its annual Cochrane Colloquium in Edinburgh.

The high profile director of the Nordic Cochrane Centre (and founder member of the Collaboration) Professor Peter G Gøtzsche has been expelled by the Cochrane Board, and four other Board members have quit in protest.

As this article in life sciences media outlet STAT details, the expulsion comes after Gøtzsche and two other authors criticised a recent review from the Collaboration on the safety of the HPV vaccine, prompting a rebuttal from Cochrane.

See also this report from Nature on how the news has unfolded and what’s at stake.

According to leading Australian health journalist and now researcher and academic Roy Moynihan, the Cochrane Review has “rightly become something of a gold standard in evidence” and he says there are big risks to public health in this very damaging public row.

In an online piece posted at BMJ (where he declares his own interest as the presenter of a podcast funded by Cochrane and describes his intervention as a “desperate personal plea”), Moynihan says:

“What’s at stake in the current bloody fight unfolding within Cochrane’s Governing Board, is not just the credibility of individuals or organisations, it’s the future of reliable trustworthy evidence in a world of increasing falsity and fake news. To see this future threatened foreshadows a disaster for all of us.”

In the post below are links to the flurry of statements, counter-statements and reports on the ongoing row.

‘A moral governance crisis: the growing lack of democratic collaboration and scientific pluralism in Cochrane’.

Gøtzsche announced (Sept 13) he had been expelled from membership in the Cochrane Collaboration by a vote of the Governing Board and said no clear reasoned justification had been given for his expulsion aside from accusing him of causing “disrepute” for the organization. He said:

“This unprecedented action taken by a minority of the Governing Board is disproportionate and damaging to Cochrane, as well as to public health interests.”

Gøtzsche accuses Cochrane of a “growing top-down authoritarian culture and an increasingly commercial business model …  (that) threaten the scientific, moral and social objectives of the organization”.

Statement by four resigning Board members

Four Board members, Gerald Gartlehner, David Hammerstein, Joerg Meerpohl, and Nancy Santess outline their opposition to the Board’s decision, describing it as a “disproportionate” response which might cause “great damage to the reputation of the Collaboration”.

Statement from Cochrane’s Governing Board

In this statement, the Board rejects public concerns about Gøtzsche’s expulsion, saying:

Without providing detailed allegations, it says the decision was about “a long-term pattern of behaviour that we say is totally, and utterly, at variance with the principles and governance of the Cochrane Collaboration. This is about integrity, accountability and leadership.”

Croakey readers may also be interested to read this BMJ article by Australian journalist Maryanne Demasi, former presenter and producer on the ABC’s Catalyst program, whose bios list her as a consultant at Nordic Cochrane Centre.

Described in a news report by the BMJ as an “ally of Gøtzsche”, Demasi says he was given five minutes by the Board to respond to a report by an external law firm commissioned by the board to review a growing dispute between him and Cochrane’s chief executive, Mark Wilson.

Urging others to “cut it some slack while it gets its house in order,” she questions whether Cochrane is experiencing a crisis of either morality or democracy:

“The political explanation for Cochrane’s crisis relates to the tension between governing an organisation and respecting individual members’ academic freedom to express dissent. The four Board members who resigned have claimed the moral high ground, but if they do not accept the statutory decision-making processes of the organisation they agreed to govern, why did they cast a vote at all?

See also this post from scientific writer Hilda Bastian that tracks the evolving row and scrutinises the HPV critique by Gøtzsche and colleagues.

We will continue to update this post as further developments come. 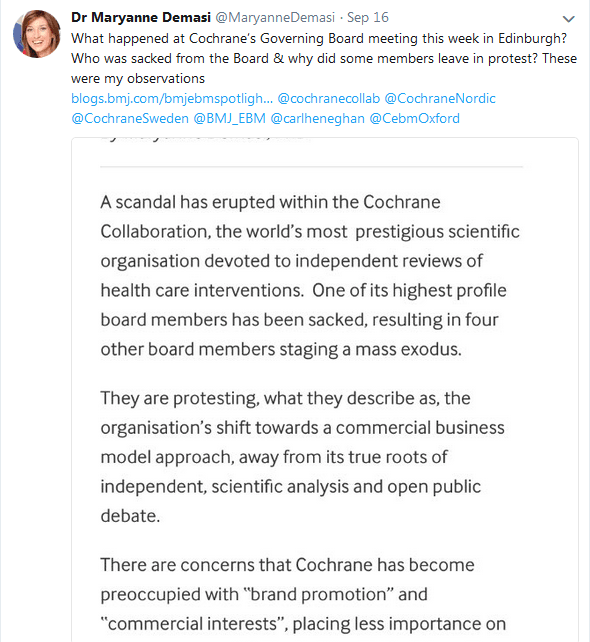