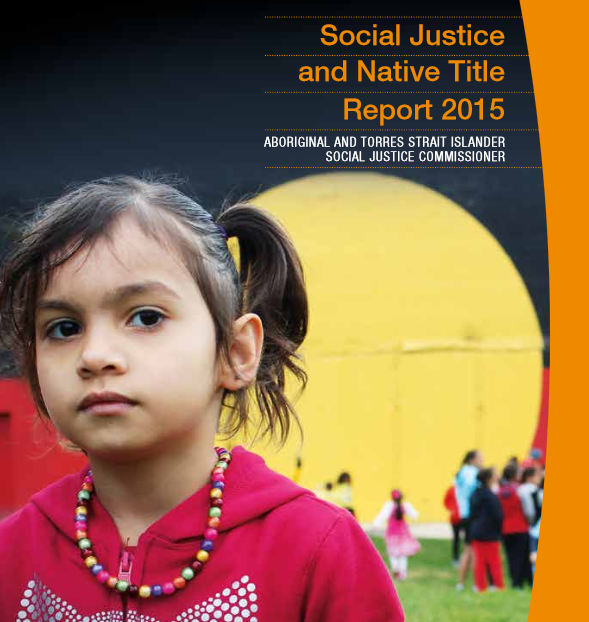 In his Social Justice and Native Title Report 2015, tabled this week in Federal Parliament, Gooda says Closing the Gap agreements should include targets on both child welfare and disability.

The report examines major developments in Aboriginal and Torres Strait Islander people over the past year – including the “deep cuts, confusion and anxiety” caused by the Indigenous Advancement Scheme, Western Australian plans to close remote communities, the Northern Territory’s paperless arrest laws, and the Australian Government’s response to the Forrest Review on Indigenous employment.

It makes 21 recommendations for action. See the full list below.

The Children’s Rights Report 2015 by National Children’s Commissioner Megan Mitchell was also tabled this week, and includes recommendations on protecting Aboriginal and Torres Strait islander children. It has a big focus on the impact of family and domestic violence on children and young people. Mitchell says:

“Children who live in homes characterised by violence are often the silent, forgotten, unintended, invisible victims.”

“Sibling violence, and family and domestic violence experienced by female children aged 15 to 17 years, are areas where targeted research is especially needed.”

In his media release, Gooda describes Indigenous child protection as “one of the most challenging issues confronting our communities.”

Victoria’s Commissioner for Aboriginal Children and Young People Andrew Jackomos has expressed similar concerns on child protection rates and trajectories. Under the Taskforce 1000 project, he is currently reviewing 1000 individual cases of Aboriginal children in out-of-home care to examine the systemic failings that have produced steep increases in the number of children removed not just from parents, but from culture and community.

Gooda’s report calls on other states and territories to also establish Aboriginal and Torres Strait Islander Children’s Commissioners in their jurisdictions and urges the establishment of a National Institute of Indigenous Excellence in Child Wellbeing to coordinate research into Indigenous child protection. He said:

“Aboriginal and Torres Strait Islander children are approximately nine times more likely than non-Indigenous children to be in out-of-home care.

“Our children are our most precious resource and their innocence and their right to be safe, healthy and free from violence must be protected at all costs.

“We need to empower and support Aboriginal and Torres Strait Islander peoples to break free from the cycle that brings them into contact with child protection authorities in the first place.”