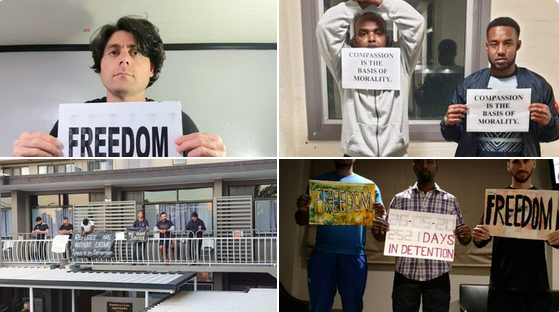 Commonwealth Ombudsman to report on COVID-19 responses in detention facilities

Commonwealth Ombudsman Michael Manthorpe is investigating how detention facilities in Australia have acted to protect asylum seekers, refugees and others being held during the coronavirus pandemic, and whether any detainees should be released on health grounds.

“Staff from the Office visited the Brisbane Immigration Transit Accommodation and the Melbourne Immigration Transit Accommodation on Friday 22 May 2020, and will visit another four facilities in the next two weeks,” the office told Croakey on Tuesday, saying they were looking to “observe the way in which the Department of Home Affairs and its contracted providers are implementing their respective COVID-19 plans”.

“Given the public interest in this matter, the Ombudsman also intends to release a public statement in June outlining the Office’s observations from these visits along with any recommendations for improvement,” it said.

Human rights and health authorities have issued multiple warnings to the Australian Government in recent months that an outbreak of COVID-19 could prove catastrophic for detainees, staff and the broader community. Many have pointed to Singapore’s experience where an outbreak among migrant workers living in cramped quarters sparked a second wave.

Last month the Public Interest Advocacy Centre (PIAC) filed a group complaint on behalf of 13 men with the Ombudsman, calling for an urgent inspection of detention facilities to examine the adequacy of conditions and measures being taken to mitigate and manage the dangers posed by COVID-19 to detainees and staff.

PIAC Senior Solicitor, Jane Leibowitz, told Croakey the group is hopeful that the Ombudsman will “work meaningfully with the Department of Home Affairs and its subcontractors to protect those it detains”. She noted his office is “charged with significant oversight and reporting functions”.

In emailed statements to Croakey, the Ombudsman’s office acknowledged that the Department of Health has identified places of detention as posing a risk of significant transmission among detainees if COVID-19 enters a facility.

For that reason, it has been “closely monitoring” the Department of Home Affairs’ approach to preparation, prevention and management of COVID-19 in the immigration detention network, it said.

“Over recent weeks, we have sought and received documents and briefings from the Department of Home Affairs, including its COVID-19 management policies and procedures, both for the whole network as well as plans for each individual site,” it said.

According to the office, the Ombudsman regularly makes recommendations to the Department and the Minister for Immigration, Citizenship and Multicultural Affairs that detainees be released from held detention, either on a bridging visa or into community detention, “including where their placement is not conducive to their medical needs”.

“Without going into the detail of individual cases, the Ombudsman is having regard to the COVID-19 pandemic, and its implications for detainees, in considering whether to make such recommendations,” it said.

His office said it had received and was considering complaints from detainees and their advocates about various aspects of the immigration detention facilities’ ability to prevent and/or respond to COVID-19.

“The Ombudsman also continues to assess the circumstances of long term detainees, and to make recommendations to the relevant Minister as he sees fit, including to release detainees into the community where it is reasonable to do so.”

The Australasian Society for Infectious Diseases (ASID) and the Australian College of Infection Prevention and Control (ACIPC) warned in March that around 1400 asylum seekers and other non-citizens are being held in detention “in crowded conditions that would preclude adequate social distancing or self-isolation”.

Along with other leading health organisations (see list below), they urged the Federal Government to consider the release of detainees into suitable housing in the community, to reduce the risk to them, staff and the broader community if there was an outbreak.

More than 1,000 academics, doctors and health professionals also have signed an open letter, initiated by Academics for Refugees, Doctors for Refugees and Librarians for Refugees, calling for the release of people from onshore and offshore detention.

In April a chronically ill refugee who is being held in detention in Melbourne took action in the High Court against Minister Peter Dutton and the Department of Home Affairs alleging they have breached their duty of care to protect him from contracting COVID-19.

The concern is not only about formal detention facilities around Australia, but in so-called Alternative Places of Detention (APODs) like hotels in Melbourne and Brisbane, where dozens of asylum seekers brought to Australia under Medivac laws are being held – and have been conducted peaceful online and public protests.

Last month we asked the Health Minister to advise:

The Minister’s office and the department initially referred Croakey on all questions to the Home Affairs Department. Pressed on whether the department or health authorities had any oversight of detention facilities in a pandemic, the Department said only that:

“Current arrangements are informed by the Communicable Diseases Network Australia (CDNA) Guidelines for the Prevention, Control and Public Health Management of COVID-19 Outbreaks in Correctional and Detention Facilities in Australia,” which had been endorsed by the AHPPC.

The Home Affairs Department also provided only general responses to a list of detailed questions, including why outspoken detainee Farhad Bandesh had been suddenly transferred to another facility after online protests and sending a video question to ABC TV’s Q&A.

We also asked about new moves in Parliament to give police-like powers in immigration centres, that would allow the use of mobile phones to be banned.

The Commonwealth Ombudsman was in 2017 nominated as the National Preventive Mechanism (NPM) inspecting body for places of detention under the control of the Commonwealth in accordance with the United Nations Optional Protocol against Torture and other Cruel, Inhuman or Degrading Treatment or Punishment (OPCAT).

His office is just one of two NPMs nominated so far in Australia as part of its OPCAT requirements – the other is Western Australia’s Inspector of Custodial Services.

A broad alliance of civil society and Aboriginal and Torres Strait Islander organisations, and senior academics last week called on Australian Governments to nominate NPMs in all other jurisdictions, to make sure there is more oversight on health and human rights in all detention facilities, including prisons and youth detention, particularly during the coronavirus pandemic.

PrevPreviousCroakey Health Media statement: Readership is booming, and thanks for your support
NextOutrage here over George Floyd’s death must lead to end of deaths in custody in AustraliaNext