Communicating the science on climate change

With Hurricane Irene focusing some attention on climate change (at the New York Times website anyway), the post below looks at some of the issues surrounding communication of climate science.

A series has just kicked off at The Conversation that promises to “shine an inquisitive light onto specific instances of misrepresentation, distortion, or spin by the Australian media as they relate to climate change”.

In the first article in the series, Professor Stephan Lewandowsky, of the Cognitive Science Laboratories at the University of Western Australia, says the the Australian media have failed the public by creating a phoney debate about climate science that is largely absent from the peer-reviewed literature, where real scientific debates take place.

But perhaps the scientific community and others also need to be choosing their words more carefully, suggests Dr David King, a general practitioner and board member of Doctors for the Environment Australia.

He explains below why he doesn’t “believe” in climate change. (At the bottom of the post, you will find a series of links to some interesting climate change resources).

Climate change is about science – not belief

You may think this is pedantic, but the choice of words does matter. Words carry meaning, value and shared understanding, even when we are not aware of the ‘subtext’.

Critics of climate change understand this well. Or at least they use the opportunity that our choice of words provide. When we state that we believe in climate change, they can label this belief as ‘the new religion.

Yet climate change concerns arose from the scientific process, not from politics, economics or even environmentalism. In the scientific process there is little room for belief, the dispassionate scientist should be an objective observer and be willing to discard a theory not supported by the evidence. The reality is that no one can be entirely objective, so here is the role for true scepticism.

Climate change critics have misappropriated the word sceptic, but act like deniers rather than sceptics. They start with a set of beliefs, then selectively choose, distort or fabricate facts to support their starting point. They start with a set of beliefs such as economic growth is unlimited, that humans are outside and above the natural order, and that humans couldn’t possibly affect the climate. These are not testable scientific hypotheses.

The rise of ‘anti-scientism’ is most visible currently in the climate change arena, but is a generally worrying trend for health care as well.

When our media presents science as belief, then we can be as authoritative as any expert in any field. It is therefore easier to believe that vaccinations may be a conspiracy to weaken our immune systems for a corporate profit. It encourages us to take an individualistic approach to scientific information, and makes legislation for public versus individual good more difficult. It encourages conspiracy theories. It even encourages threats against scientists if they discover inconvenient truths.

Starting with belief rather than scientific evidence also encourages the use of pejorative terms.

Are scientists who warn about the dangers of a rapidly changing climate “alarmists”?

It is the evidence that is alarming, not the starting intent of those studying and applying climate science. We don’t hear doctors being labelled as alarmists for warning about the obesity and diabetes ‘epidemic’.

So now when I’m asked whether I believe in climate change, I make a point of saying no, it is not about belief but about consideration of the evidence. The evidence regarding climate change is more certain than in most cases of clinical medicine, where action is decided on the balance of risk and benefit.

The diagnosis is relatively easy – developing a suitable response is the challenging part.

Here the scientific process is less able to assist us. So I have to rely on extrapolating from other experiences in life. Some people don’t stop smoking until they have a heart attack, for some until it is too late.

Now I can talk about belief – I don’t believe that our current political and social structures will provide the necessary leadership to prevent more severe climate change. I hope that I am proved wrong.

Some of the climate change sites that got a mention at the Banff science communications course that I’ve been attending for the past 15-days in Canada:

Skeptical Science not only counters climate change misinformation, but has an app. 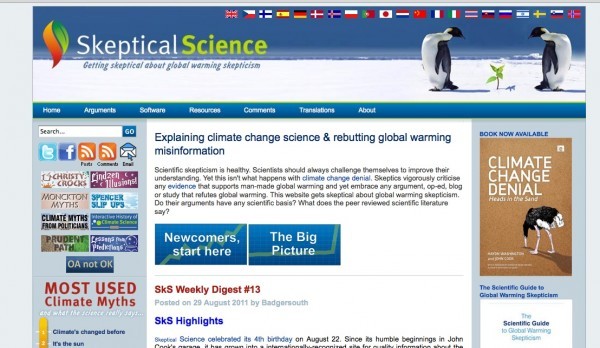 Climate Debate Daily which aims to “provide a new way to understand disputes about global warming”, lists the opposing arguments under “calls to action” and “dissenting voices”, and also links to many other sites.

A somewhat more sophisticated analysis of the challenges in communicating climate science is provided at Understanding and Solving the Climate Change Problem, an initiative that aims to continue the work of the late Stanford University scientist Professor Stephen Schneider.

Meanwhile, one other thing I learnt at Banff is – never under-estimate the power of entertainment and humour as a means of communication.