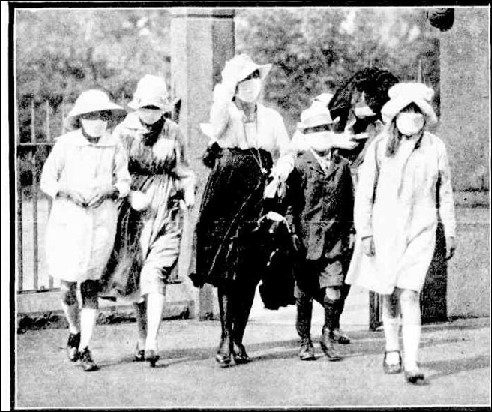 Introduction by Croakey: A new Australian museum has developed an online resource on two pandemics a century apart – the Spanish flu in 1919 and COVID-19 in 2020 – for an upcoming exhibition on connection in times of crisis.

The “Connecting through COVID” exhibition at the National Communications Museum explores Melbourne’s response to the two pandemics and focuses on how communication methods and techniques have changed.

The exhibition opens for in-person visits in November but a virtual visit is already available online.

Croakey editor Jennifer Doggett spoke to historian Mary Sheehan, an adviser for the exhibition, about how ‘Connecting through COVID’ “brings the numbers to life” and highlights individual stories which reflect how the pandemic played out in Melbourne.

Melbourne’s experience of the 1919 Spanish flu pandemic can tell us much about Australian society at the time and has some valuable lessons for our response to the COVID-19 pandemic today.

People who had been exposed to the Russian flu had some immunity to the Spanish flu and were less affected and this is why younger people were most vulnerable to the Spanish flu, unlike COVID-19 which affects mostly older people.

“Around three-quarters of all people who died from the Spanish flu in Victoria were aged between 20 and 45 and the loss of these young Australians, compounding the losses already experienced during World War I, had immeasurable long-term demographic, social and economic effects,” Sheehan says.

The loss of futures

Young men, who tended to be out and about in public more than women, were particularly at risk. Pregnant women and their babies were also affected and the virus caused a large number of stillbirths and neonatal deaths.

The impact of the 1919 pandemic on Aboriginal people in Melbourne is not well understood, in part because they were not counted in the Census at that time.

“The limited research that has been done to date on this issue suggests that mortality among Aboriginal people was 50 percent greater than among Europeans, suggesting that the Indigenous community in Melbourne would have been devastated by the disease,” Sheehan says.

Overall, the Spanish flu was much more deadly than COVID-19 and caused around 50 to 100 million deaths globally (estimates are difficult due to the lack of data collection in some countries). In Australia around 40 percent of the population caught the Spanish flu with a conservative estimate of almost 17, 000 deaths.

In contrast, COVID-19 has a 2.3% mortality rate and has to date resulted in 2.4 million deaths globally and 900 deaths in Australia.

“One reason for the much lower mortality rate from COVID-19 is the advances in science and medicine that have been made over the past 100 years,” Sheehan says.

For example, in 2020 scientists took only weeks to identify the coronavirus’s genome sequence, paving the way for the development of effective treatments and vaccines. In contrast, the virus causing the Spanish flu was not identified until the 1980s, from a sample gained from the permafrost in Alaska.

In 1919 there was no knowledge of viruses and only a basic understanding of epidemiology. Doctors did not have access to antibiotics, anti-viral medicines or mechanical ventilators. Care for patients was limited to keeping their temperatures down, hydrating and trying to make them more comfortable.

Although a vaccine had been developed for the Spanish flu and distributed in Australia before the pandemic arrived, it was based on a false theory about the cause of the disease and turned out to be ineffective against the Spanish flu (although it may have helped patients who went on to develop bacterial pneumonia).

A century has also made a major difference to how fast information can be transmitted. In 1919 the authorities had to rely on the postal service to send flyers and other forms of written information to local governments to help them prepare their communities for the virus.

There was regular communication via telegraph between countries in the South Pacific, Africa, New Zealand and Australia sharing information to assist in preparation for the coming pandemic but nothing like the widespread availability of real-time information today.

While the slower pace of life may have hampered the rapid exchange of information in 1919, one advantage was the length of time it took for Spanish flu to spread around the globe. A century ago it look more than a month to travel from London to Melbourne. This meant that the virus did not arrive in Australia until January 1919 (months after it was first detected in Europe), which worked in Australia’s favour as by that time the virus had attenuated and was less virulent.

The role of governments

Another major difference in Australia’s response to the two pandemics was the role of the Federal Government.

While in 2020 the Federal Government was criticised by the states for being slow to act on COVID-19, in 1919 there was no federal minister for health or federal health department and the states were almost entirely on their own.

In fact, the pandemic prompted the establishment of the Department of Health in Canberra in 1921. Many other countries also created centres for disease control to increase capacity to deal with future infectious disease threats.

Just as in 2020, there was a high level of pressure put on political leaders managing the pandemic and in Victoria during the Spanish flu pandemic the Minister for Health was forced to take sick leave due to stress and another government member had to take over his role.

In 2020 as many are now concerned about the removal of JobSeeker and JobKeeper payments and supplements, it’s worth remembering that a century ago there was little or no social security.

“Some of the major similarities in our responses to the two pandemics are the public health measures implemented to prevent the spread of the viruses,” Sheehan says. “Quarantine, isolation, mask wearing and hand hygiene were promoted in 1919, just as they are today.”

There was also an abundance of conspiracy theories about the origins of the disease, particularly focused on stigmatised or minority groups. In 2020 many Chinese-Melburnians reported experiencing racism in the early days of the COVID-19 pandemic; in 1919 it was the Bolsheviks and the Germans most often blamed for causing the Spanish flu outbreak.

In both pandemics there were attempts by snake oil salesmen to promote quack cures or prevention measures, including smoking tobacco to prevent the spread of the virus on trains.

Workforce shortages was another challenge common to both pandemics. In 2018 many doctors and nurses were still in Europe in the aftermath of World War I. This meant that Victoria had to rely on volunteers, including Voluntary Aid Detachment (VAD) nurses, a volunteer brigade of nurses established during World War I by the Red Cross. As the pandemic progressed, almost anyone able to help out was welcomed.

Victoria established 52 emergency hospitals in government-owned facilities such as schools and colleges. In Melbourne the Exhibition Buildings were used for convalescent patients and then for more seriously ill patients. At its peak this temporary hospital had up to 2,000 beds and was mostly staffed by VAD who made beds; Red Cross volunteers sewed sheets and cooked food for patients.

The strong community spirit evident last year during Melbourne’s lockdown was also present in 1919. In one hotspot in Yarraville South a group of local women got together and patrolled the streets.  Anyone needing help could put an SOS sign on their window and the women would assist by fetching medicines, bringing them food or doing their laundry in coppers set up in the local park.

The 1919 lockdown was similar in many ways to that of 2020. Theatres, billiard saloons, horse racing meetings and schools were all closed. Pubs were closed but lobbied to reopen after a few weeks, with a cap of 20 patrons (there is evidence of widespread illicit selling of alcohol from the back door of pubs). Unlike in 2020, churches in Victoria were not closed but masks were mandatory for all attending, except for the minister.

One lesson that health authorities can learn from 1919 is the risks involved in opening up too early from a lockdown. When schools and other public venues, such as racetracks, reopened after the first wave of the Spanish flu subsided, it led to a devastating second save of the disease with even greater mortality.

The long-term health impacts of pandemics should be on the radar, too, especially given the emergency data on ‘long COVID’. In the years after the Spanish flu pandemic, there was a rise in abnormal births, an increased incidence of diphtheria and measles and a rise in Parkinson’s disease.

Mary Sheehan is undertaking a PhD at the University of Melbourne on the Spanish flu pandemic in Melbourne in 1919. She is a founding member of Living Histories and has written a book about the history of nursing at St Vincent’s Hospital in Melbourne. Contact Mary Sheehan at mmsheehan@student.unimelb.edu.au if you have information about Spanish flu in Melbourne to share.