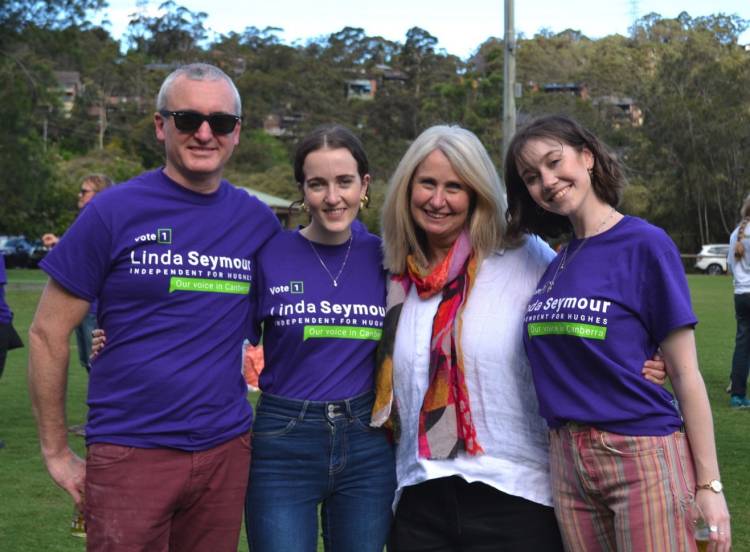 Introduction by Croakey: Linda Seymour, the latest community independent candidate announced for the federal election, made a promise during the 2019-20 bushfires she would work for action on climate change and to stop her federal MP Craig Kelly “undermining public health and social cohesion”.

Seymour was announced on Sunday as the We Are Hughes candidate for Hughes, the day after teacher Penny Ackery from Voices of Hume was announced to run as an independent candidate against sitting MP Angus Taylor, Minister for Industry, Energy and Emissions Reduction.

Journalist Linda Doherty reports from the We Are Hughes campaign launch on Sunday, following her recent Croakey investigation revealing how concerns about climate change, misinformation, injustices facing Aboriginal and Torres Strait Islander people, and other public health threats are behind the rise of independent political candidates.

Seymour, an architectural consultant who has worked on stadiums for Olympic Games, was angry that Kelly had been given the stage to politically indoctrinate children. “At the 2016 election I was dismayed and at the 2019 election I was mortified,” she said, as Kelly increased his majority with 60 percent of the two-party preferred vote.

But then came the 2019-20 bushfires, with the horrifying loss of life, including the deaths south-west of Sydney of two young firefighters, Geoffrey Keaton and Andrew O’Dwyer, both fathers of toddlers.

Kelly’s response to this tragedy not far from his electorate was to continue to deny global warming as a contributing factor to extreme weather events like the bushfires, and Seymour saw an inability “to connect to humanity”.

“I made a promise that day I would do something,” Seymour said at her campaign launch on Sunday at Bonnet Bay Football Club, on Dharawal Country on the banks of the Woronora River.

In the following months Kelly continued his diatribe on climate change, aided and abetted by right-wing media, and then continued to dispute science when COVID-19 arrived in early 2020, railing against vaccination, lockdowns and spruiking discredited treatments.

Hughes is the largest and greenest of Sydney’s electorates – 375 square kilometres, including the Royal and Heathcote national parks, the Sutherland Shire and Liverpool.

Just 18 months ago Seymour and Anneliese Alexander who had connected in a Facebook group met for coffee and We Are Hughes was born, modelling itself on the ‘Voices for’ movement pioneered by former independent Cathy McGowan in the Victorian rural seat of Indi.

The participatory democracy model has resulted in 1,300 subscribers to We Are Hughes website and the views of 600 constituents recorded through kitchen table conversations, surveys and community events.

Climate change and integrity in politics are the major issues, along with local issues such as the environment. Community webinars have connected members to scientific and medical experts for discussion on climate change and COVID-19.

Seymour and her team have been supported by current and former independents, including Cathy McGowan and Dr Kerryn Phelps, the former independent for Wentworth, who provided a video endorsement at Seymour’s launch. Tony Windsor and Julia Banks have tweeted their congratulations (see more on Twitter at @HughesRenews).

Phelps said in the video that more independents on the cross-bench would break the impasse on action on climate change and a federal integrity commission. The election of independents was a growing movement and an “evolutionary leap” in politics as people power restored “the power of balance”, she said.

At least another five of the 35 ‘Voices of’ grassroots political movements are expected to soon announce candidates, with climate change and integrity in politics as the top community concerns. Former charities’ CEO Kylea Tink is already campaigning for Voices of North Sydney, as is recently endorsed Voices of Groom candidate, former social worker Suzie Holt.

• Also see: a Twitter report of the launch at NoFibs by journalist Margo Kingston. 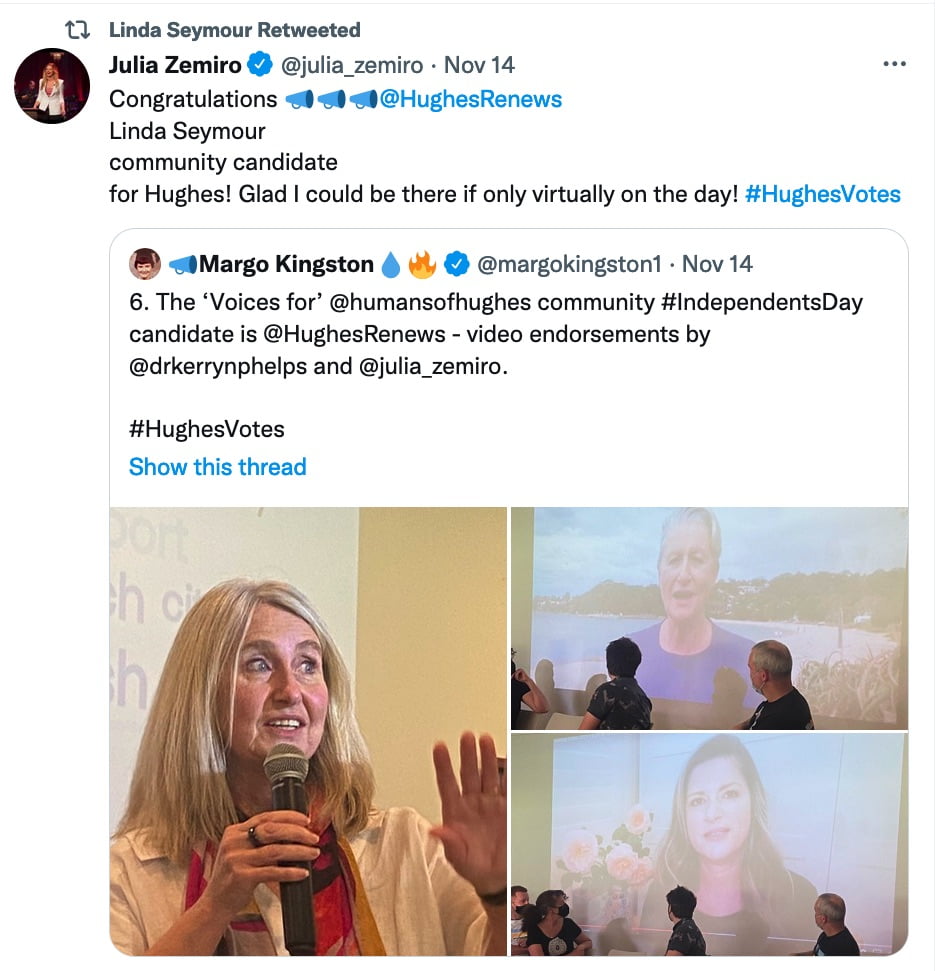 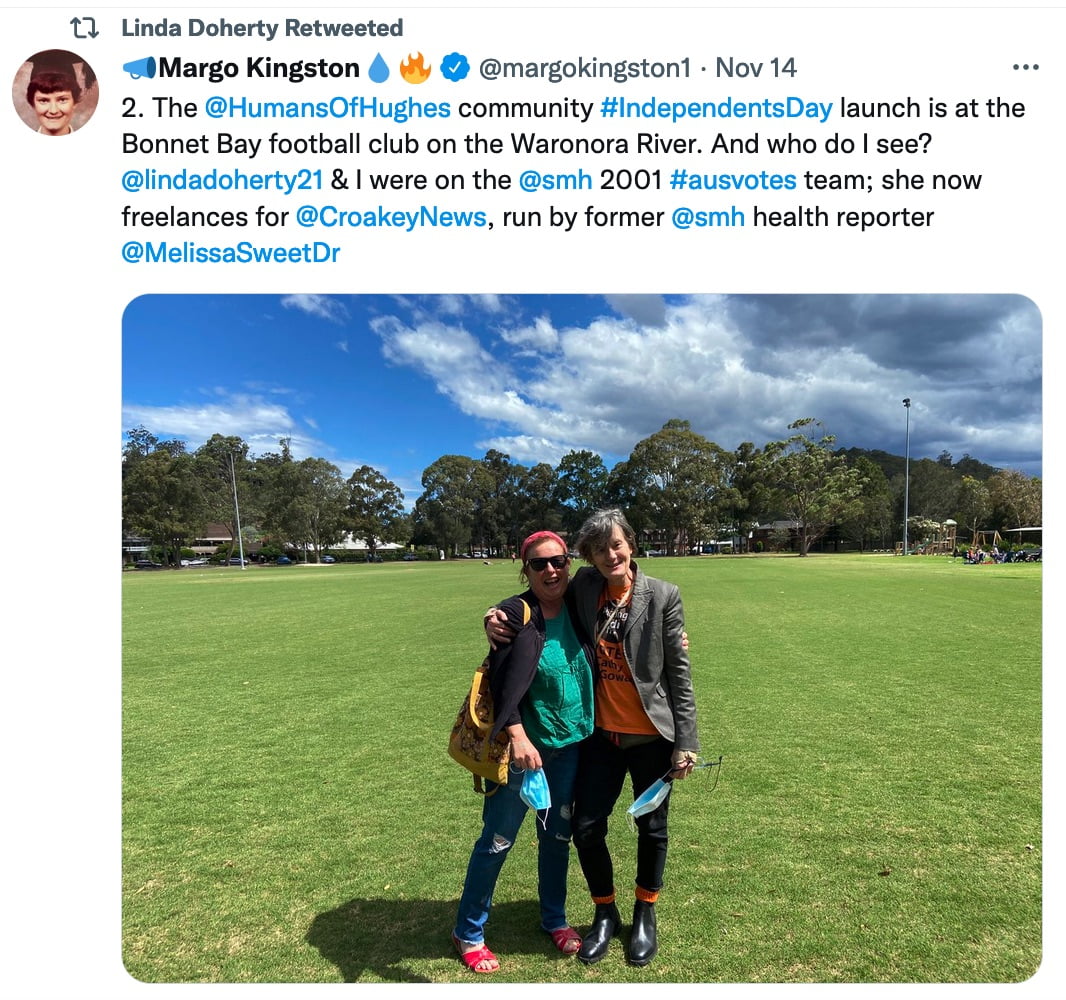