Snapshot of harm: graphics from the National Alcohol Strategy 2019–2028

Introduction by Croakey: The long-awaited National Alcohol Strategy 2019-2028 was released this week, with the Federal Government immediately ruling out reform to alcohol taxation – a key policy option listed in the strategy.

Just days before the strategy’s release, many in the public health sector were shocked to learn of the abrupt departure of Michael Thorn as long-term head of the Foundation for Alcohol Research and Education (FARE).

Thorn had been a vocal critic of the alcohol industry’s involvement in developing the strategy, as outlined in this FARE analysis that attracted considerable media coverage earlier this year.

While key health groups have expressed disappointment with the Government’s response – see this Croakey summary of the strategy and reaction from the health sector – the industry welcomed it as striking a balance in “focusing on alcohol harm, while recognising the vast majority of people drink responsibly”.

“Consumers will be relieved,” declared the Brewers Association of Australia this week in a statement.

In the article below, health journalist Cathy O’Leary examines Thorn’s departure and concerns about the ongoing influence of the alcohol industry.

Public health experts are calling on Australia’s alcohol harm watchdog to maintain its pushback against the alcohol industry, in the wake of the shock departure of its highly respected chief executive.

Michael Thorn, who had been in the top job at the Foundation for Alcohol Research and Education (FARE) for the past nine years, left abruptly last week amid speculation that he had lost the support of some of FARE’s board because of his fierce criticism of the alcohol industry and its political power.

FARE is an independent, not-for-profit organisation, trying to limit the harm from alcohol in Australia, estimated at almost 6,000 deaths and more than 140,000 hospital admissions a year. It has assets of more than $30 million.

Croakey understands the relationship between Thorn and FARE’s board chair of six years Andrew Fairley, a commercial and equity lawyer, had deteriorated in recent months.

Thorn was recently told by the board that his contract would not be renewed when it expired in February 2020, prompting him to seek an early exit agreement.

In a statement to Croakey, Thorn confirmed that a deed of separation had been reached which included confidentiality provisions.

FARE staff were notified of his departure by chief financial officer Sharrin Wells, who reports to the chief executive, on November 26. On the same day Fairley made a brief announcement that Thorn had stepped down.

By the next day, November 27, the position was already advertised, with applications closing on December 11.

Many of Thorn’s peers were shocked as news filtered through that he had left the role. Some privately expressed concerns that FARE’s public health presence was being watered down while the board became too corporate-focused.

The abrupt exit comes a few months after eyebrows were raised in the mainstream media about the under-the-radar appointment of political pollster and campaign strategist Mark Textor to the FARE board in June this year.

Textor’s company Crosby Textor, now known as CT Group, has worked as a lobbyist for the alcohol industry with clients including the global liquor giant Diageo.

While there is no suggestion of any change in FARE’s direction since Textor became a director, some health campaigners have questioned the suitability of a known alcohol lobbyist on the board.

One health advocate, who did not want to be named, said the appointment “failed the pub test”.

Although the World Health Organization has long asserted that “the alcohol industry has no role in the formulation of alcohol policies, which must be protected from distortion by commercial or vested interests”, researchers have documented a range of strategies used by the industry to influence policy, including corporate political activities.

Thorn has been a vocal critic of the relationship between politicians and alcohol industry lobbyists, including earlier this year when concerns were raised about the industry trying to undermine the Federal Government’s revised national alcohol strategy.

At the time Thorn said:

It’s quite remarkable how politicians and governments want to cosy up to the alcohol industry.

There is soft power that the alcohol industry’s lobbyists peddle around the parliament with their gifts and their events and their frequent access to members across all sides, not just with ministers, but also with backbenchers.”

Sources have told Croakey that Thorn’s “take no prisoners” approach in combating the relentless push of the alcohol industry had rubbed some people up the wrong way, even health colleagues.

Some felt his combative approach was unhelpful at times.

“He’s a hard-nosed character and can piss people off, and not just the alcohol industry,” according to one health commentator. “You have to push boundaries but you have to know when to back off a bit too.”

“But having said that, the job needs a bit of mongrel and being prepared to stand up to a very powerful industry.”

Many of Thorn’s peers were quick to acknowledge his enormous contribution in challenging policies and attitudes that caused alcohol harm.

Drink Tank, the alcohol policy commentary site set up by FARE, was gushing in its praise compared to the restrained announcement from FARE itself.

Public Health Association of Australia chief executive Terry Slevin told Croakey that his organisation was surprised by the outcome for Thorn.

Michael has been a warrior for public health and prepared to take on the alcohol industry.

We think FARE plays a vitally important role when it comes to advocating for strong public policy on alcohol in Australia and we hope it continues to do so in a robust and forthright manner, because the alcohol industry will continue to prosecute their own financial interests and they need to be held to account.

This is an important organisation that can, and should, continue to do that work.”

Slevin said FARE was in a unique position to effect change.

“The resources that it has available to it is rare in any public health fight and it gives them the freedom to be bolder and take more risks than organisations that rely on government for funds,” he said.

“So it’s crucial it continues to act in a manner that allows them to make best use of that freedom when it comes to public policy debate.”

PHAA vice-president (development) Rohan Greenland wrote on Twitter that “Big Booze will be popping the corks at this news.”

Curtin University Professor Mike Daube, a former president of PHAA and co-chair of the National Alliance for Action on Alcohol, said Thorn’s departure would be a huge loss.

Daube said Thorn was the best thing that happened to national alcohol campaigning in decades.

“He turned FARE from a sideshow into an effective, innovative, evidence-based campaigning and funding organisation,” he said.

“Under his leadership FARE has had an extraordinary impact, exposing and standing up to powerful vested interests in the alcohol industry and its allies, leading action nationally and in various States.

“He will be hugely missed.”

In a statement, a FARE spokesperson said that Thorn had served the organisation with distinction over nine years as chief executive but the board considered that after such lengthy tenure it was time for change.

In relation to Textor’s appointment, the spokesperson said he had worked professionally for a significant number of companies, industries, communities and causes over his long career.

“His unmatched record of success in persuading voters and decision-makers alike is why the board invited him to join FARE,” the spokesperson said.

FARE also confirmed that Fairley was due to be reappointed as chair at its annual general meeting on Friday (December 6), at the board’s request.

In a statement to Croakey, Thorn said he hoped that FARE would continue to be a fearless and independent public interest organisation, particularly as in Australia and around the world the alcohol industry continued to unduly influence good public policy making, including public health policy.

FARE is a rare public interest organisation in that it is blessed with significant financial assets and is respected for its leadership in working to stop harm caused by alcohol.

And like all public health organisations, it needs to be ever vigilant in protecting its independence and integrity from forces intent on doing it harm.”

• Cathy O’Leary has been an award-winning health journalist in Perth for more than 30 years.  She won the Media Entertainment and Arts Alliance’s 2018 Clarion Award for the most outstanding contribution to journalism in Western Australia.

• Declaration from Croakey: FARE is a member of the funding consortium that helps support our work. 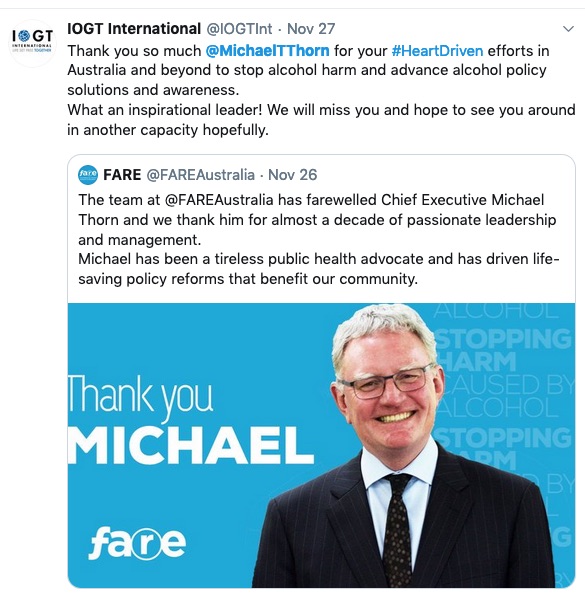 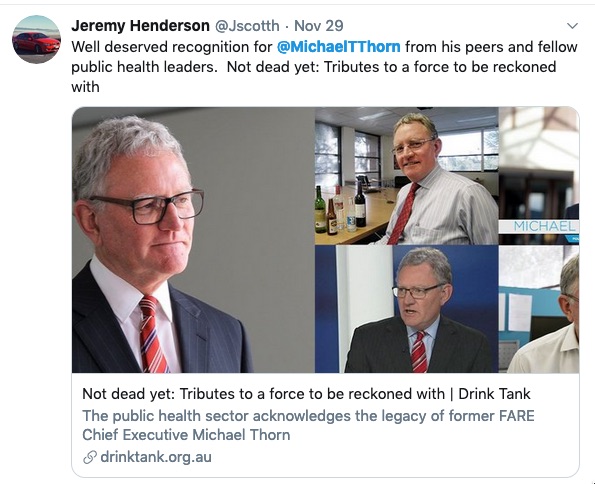 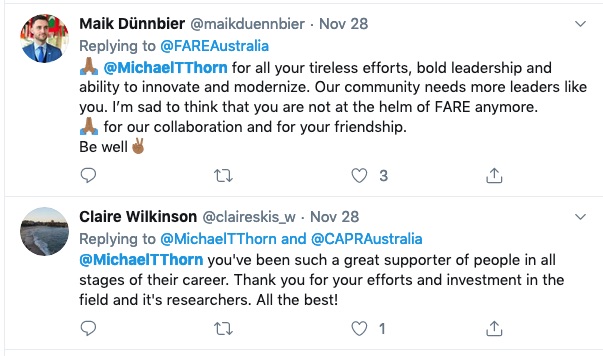 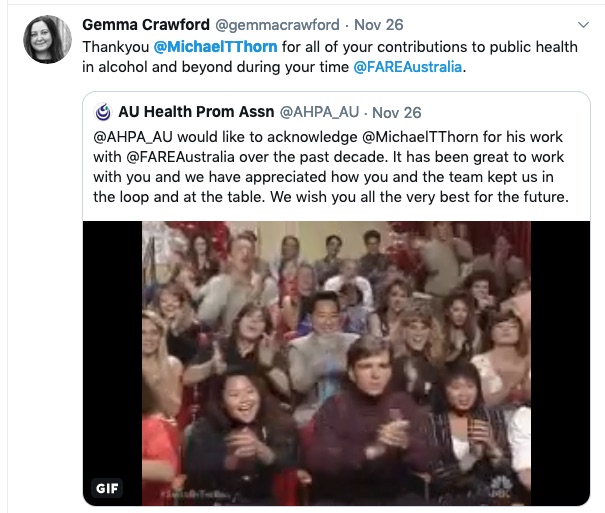 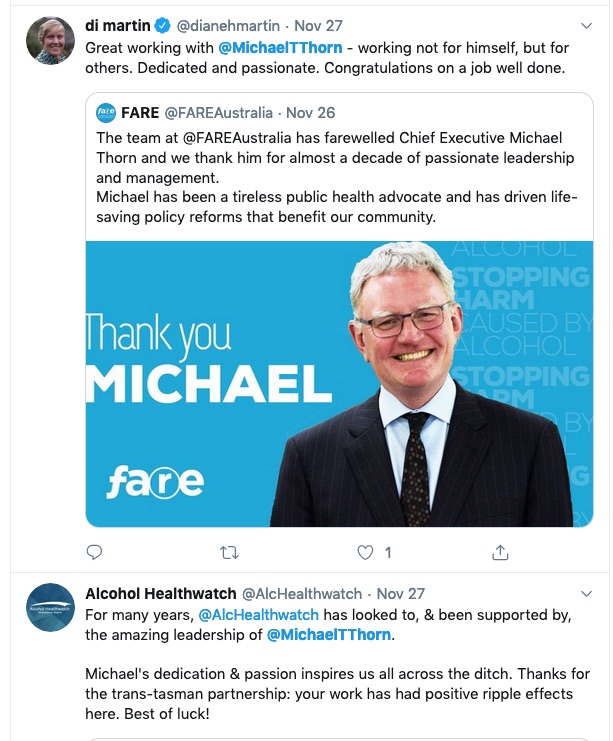 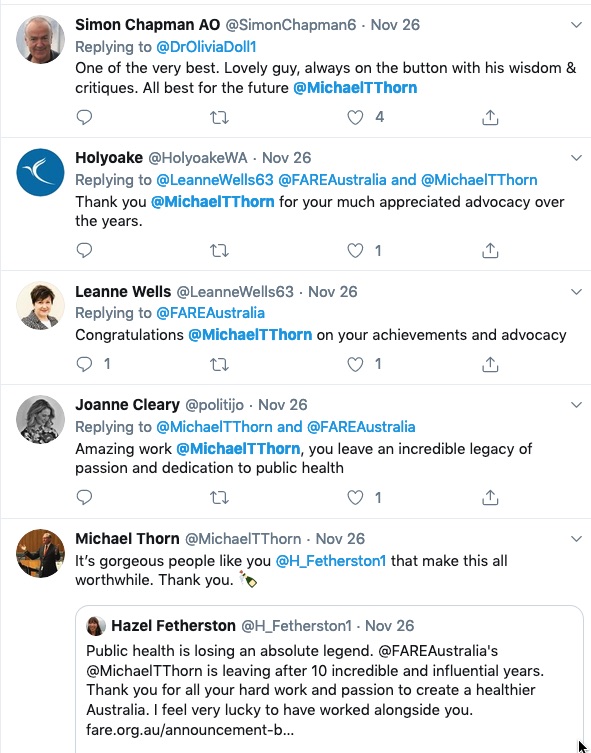 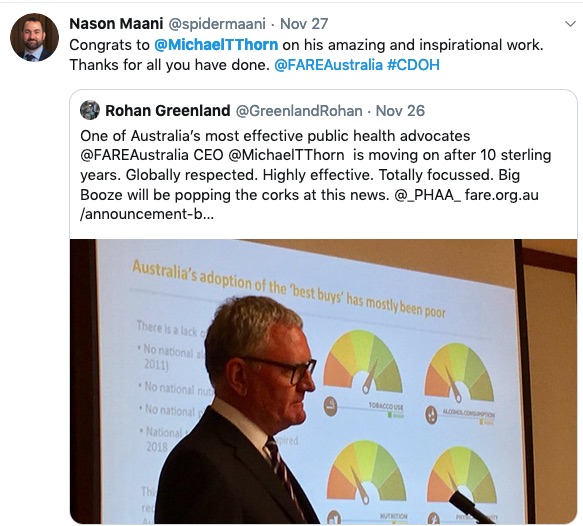 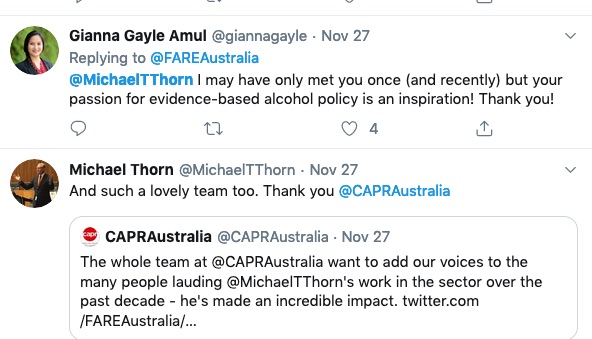 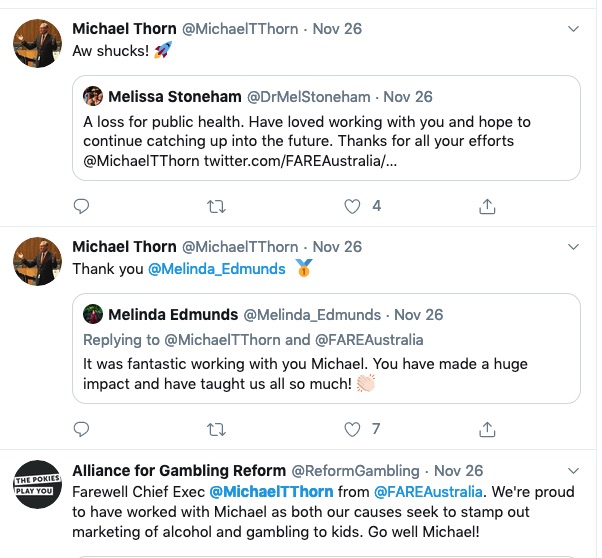 PrevPreviousAhead of a dangerous summer, join us in addressing #HeatwaveHealth
NextNew report on women’s health – from #RANZCOG19. Download your free copyNext