An award-winning Australian company involved in housing projects in disadvantaged regions in Australia and around the world has raised serious questions about a national Indigenous housing initiative with a budget of $5.5 billion.

Paul Pholeros, a director of Healthabitat, said successive governments had refused to look at evidence showing “sloppy workmanship, shoddy materials and disgraceful results” because “they would have to acknowledge that millions of housing dollars were and still are being mismanaged and wasted”.

Much easier, he said, to blame Indigenous people themselves for the sub standard housing they’re in and “perpetuate the myth that the housing problem is too big or too hard to improve”.

Pholeros said the substandard state of Indigenous housing was “a disgrace”. He said:

“When I speak to people overseas, they say ‘how can this be? You’re from one of the wealthiest nations in the world’.

The answer is not to simply throw hundreds of millions of housing dollars at the problem without carefully assessing the results.

Rather than big building projects to construct new dwellings, our strategy to improve the homes is much cheaper and produces real results. The remaining money can then be used to design and build new homes.”

Pholeros, an architect, was awarded an AM in 2007 in recognition for his persistence and outstanding service to the health and well being of the Indigenous populations of Australia and the Torres Strait Islands.

In 2011, Healthabitat was the winner of the UN Habitat World Habitat Award for its achievements in improving health outcomes.

“We have had communities complain that after $75,000 per house upgrades were completed under the National Partnership on Remote Indigenous Housing (NPARIH), houses went backwards in their ability to function using our standard tests. We checked and they were correct,” Pholeros said.

Under a separate initiative, between 1999 and 2014, Healthabitat has conducted 206 Housing for Health projects, improving more than 8,000 houses across the country.

Poleros told more than 100 rural and remote area health professionals at the CRANAplus conference in Melbourne last week that Healthabitat tests on houses before work began showed that only 9% of the houses had a safe electrical system, 37% had a working shower and 6% a working kitchen.

“At an average cost of $7,500 per house, we managed with our projects to turn those statistics around to 82% with safe electrical systems, 87% with a working shower and 20% with a working kitchen.

We have shown that if you do the simple, tedious small jobs, like fixing taps, hot water systems, drainage pipes, stoves, lights and many more parts of existing houses, you can dramatically reduce health problems, and ease the impacts of undesired overcrowding.”

A health study conducted by the NSW Department of Health released in 2010 showed a 40% reduction in hospital admissions in the communities that participated in Housing for Health projects compared to those that had not been involved.

However, in mid 2011 the Australian Government stopped the FHBH program and the scheduled review of the NIHG.

Pholeros said the myths about Indigenous housing continue to be perpetuated:

“The myth that the Indigenous people are the problem: that they trash their homes – not true.

“Our report shows that of the 265,682 items fixed in the 8000+ homes nationally, 70% of the problems were routine wear and tear, the infrastructure and fittings had deteriorated or were worn out; 22 % were due to faulty workmanship and only 8% were caused by vandalism or tenant damage.

Remember we are dealing with harsh environments: the dust that gets into systems, the humidity, the high mineral content of water that corrodes pipes and houses that are often overcrowded.”

While Housing for Health projects are still being run by the NSW Government, the bulk of Healthabitat’s work is in developing countries, where they are making a difference to people’s health through improvements to their living environments.

Pholeros said the success of Healthabitat stems from the health priorities it created back in the 1980s when they first started.

That Guide is now in a new form called Housing for Health – the Guide and is available as a website. It is structured around safety and the Nine Healthy Living Practices which guide their work: providing facilities for washing people; washing clothes and bedding; safely disposing of wastewater; improving nutrition; reducing crowding; reducing the impacts of insects, vermin and animals; reducing dust; controlling temperatures; and removing hazards.

Healthabitat has produced Housing for Health – The Guide as a free, interactive, online publication to improve health by ensuring the better design, construction and maintenance of housing and the living environment.

Check the link to learn more about Housing for Health: the Guide, use it in your daily design practise, use it to manage housing and then help us expand the content of the Guide by giving your ideas, experience and feedback.

“Another major factor that has been practised since the beginning is that, within 24 hours of going into a community, we make some immediate change.

Outsiders are often seen as being there to write reports, tick boxes, promise a lot and walk away.

We outsiders are assumed to be from government or agencies and often represent the problem in the eyes of Indigenous communities and certainly not the solution.

The answer is to look at the situation and start the fix things up straight away. It may not be a big change to begin, but we haven’t sat around talking and planning and discussing and debating. We’ve asked what the immediate problems are and we’ve got started.”

(PostScript from Croakey: The Department of the Prime Minister and Cabinet has been asked if they would like to respond to this article.) 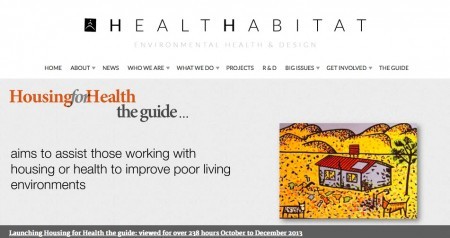 • Freelance journalist Rosemary Cadden and editor of the quarterly CRANAplus magazine covered the conference for Croakey readers. Coverage of the CRANAplus conference is compiled here.