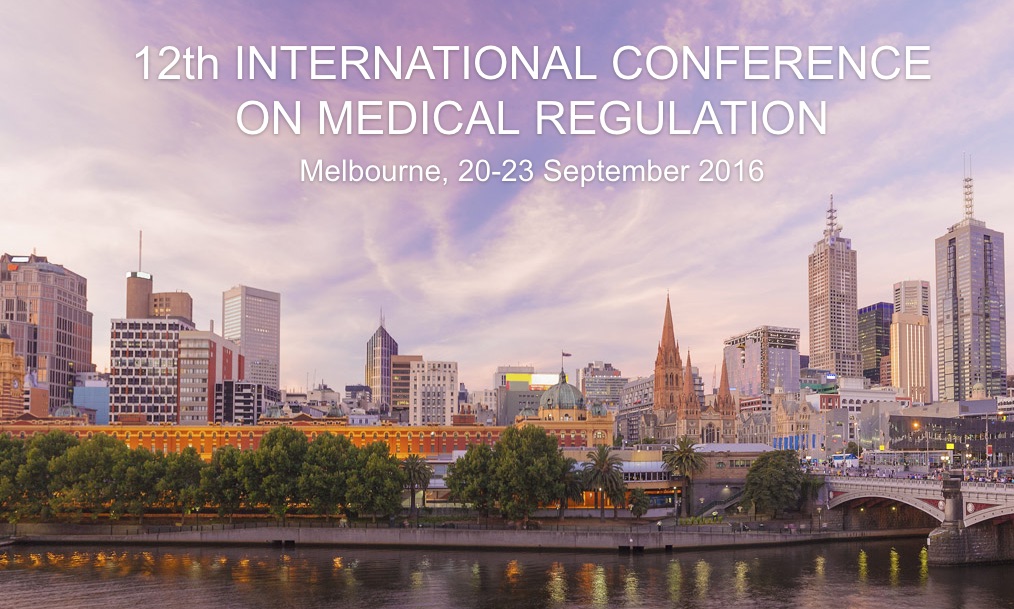 Conference preview: What are the big issues in international medical regulation?

The 12th International Conference on Medical Regulation is being held in Melbourne next week, hosted by the Medical Board of Australia (MBA) and the Australian Health Practitioner Regulation Agency (AHPRA).

Organisers say it will be the biggest and most diverse gathering of the International Association of Medical Regulatory Associations (IAMRA) yet, with more than 450 delegates coming from 42 countries.

Journalist Marie McInerney will report on the discussions for the Croakey Conference News Service. In the article below, she previews some of the issues to be showcased at the conference.

For live-tweeting of the conference, follow @mariemcinerney, @IAMRA2016, and @WePublicHealth, which will be run by AHPRA next week, and the #IAMRA2016 hashtag.

Many of the issues to be canvassed at the 12th International Conference on Medical Regulation have been writ large in headlines across Australia over the past year or more.

The conference is being held in Melbourne amid continuing investigations into a number of tragic and distressing failures in care across the country. They include allegations of serial sexual abuse against a Melbourne neurologist which sparked a review of Australia’s chaperone system, the tragic deaths of babies at Bacchus Marsh Hospital, a fatal oxygen mix-up in New South Wales and incorrect chemotherapy doses in South Australia.

Croakey has also reported on continuing debate about the role and performance of the Australian Health Practitioner Regulation Agency (AHPRA) since state-based medical boards were rolled into one big national register of all health practitioners six years ago.

Medical Board of Australia (MBA) chair Dr Joanna Flynn said the conference is a valuable opportunity for regulators from across the globe to talk about challenges and successes of regulation in various and varying jurisdictions and how they can better predict “where the next iceberg is”.

Sessions like ‘Physicians behaving badly‘ will focus on a range of practitioner issues, from dishonesty and fitness to practice through to a timely workshop being conducted by the Royal Australasian College of Surgeons after its investigation upheld whistleblower claims that discrimination, bullying and sexual harassment are rife among surgeons.

But Flynn told Croakey the conference will also focus on the crossover between individual “adverse events” with systems issues like Australia has seen in some of the issues outlined above, and most alarmingly in the United Kingdom’s Mid Staffs scandal.

“There’s an emerging question, particularly in the UK, here, and in some Canadian provinces about how do you link up what is happening in the health system in terms of standards and quality and what might be regarded as adverse events….and the systems issues.

“A practitioner might say ‘yes, that went wrong, but it’s not my fault, this or that other aspect of the system didn’t support me to do a good job or give me resources, or sometimes I may have been pressured to do things cheaply or didn’t have enough time’,” she said.

“On the other hand, the broader community, understandably and appropriately, is less and less tolerant of either side of that regulatory divide … saying ‘that’s not our problem’.”

This has been a big issue in the UK in the past five years, post Mid Staffordshire, she said, where there was plenty of data about a poorly performing system with poorly performing practitioners and questions of quality control, governance and compassion which raised the big question: “why didn’t people join those dots up and do something about it?”

It’s led to demands that regulators be more proactive, seeking to prevent harm before it occurs at the systemic level but also to identify areas of risk among different groups of medical practitioners, at different points in their careers, in different specialties, and/or where they work. These are expected to be big topics at the conference.

Community standards and expectations will also be a major theme, including a plenary discussion hosted by ABC broadcaster Geraldine Doogue on ‘Shaping an old profession for a new society – what does the community need/want/expect?‘.

The panelists at another plenary will include Professor Ron Paterson, who is leading AHPRA’s chaperoning review and public health physician and health lawyer Dr Marie Bismark whose research focuses on the patient voice in improving the quality and safety of care.

It’s recognition, Flynn says, of the dramatic shift in medical regulation in recent decades, from what was once a “very sheltered business” but is now subject to huge scrutiny by government, the public and media, as well as criticism from within.

It is, she said, really important to hear from strong voices in the community and also to share experiences across regulators in different countries about what is working well and what is not.

Some of those experiences, she says, will point to the need for better practice, others to the need for legislative change and better linkage of data. They are live issues in Australia, where health insurance and medical indemnity funds often have more data about which doctors are complained about than regulators, including issues like whether a doctor under investigation may previously been part of a legal process that was settled.

Flynn said Australian regulators are also currently lobbying the Council of Australian Health Ministers about changing laws so practitioners under investigation have to reveal everywhere they work, not just a primary “employer”, and to address “a deficiency” in law about how much regulators can tell complainants at the end of a complaint process.

“If we didn’t do something that led to a restriction on a doctor’s registration, it can feel from their point of view like we’re saying ‘you gave us a complaint, we did something with it, we’re not telling you what it is, and we did nothing in the end’, which is pretty seriously unsatisfactory for people who complain,” Flynn said.

The conference will also focus strongly on global challenges, particularly around the growing mobility of medical practitioners.

A plenary session on the issues will be chaired by Professor Vivian Lin, from the World Health Organisation’s Regional Officer for the Western Pacific, looking at education, registration and cultural issues for medical practitioners who move between nations and continents. It’s likely to raise ethical questions around the globalising workforce, including much reported claims that there are more Malawian doctors in Birmingham than in Malawi.

Other sessions will look at the regulatory challenges involved in large-scale public health emergencies like Ebola, war and major movements of refugees. Lin is also expected to report back on a regional workshop being held in the lead up to the conference on regulation issues in the Western Pacific.

Martin Fletcher, CEO of AHPRA, said the conference raises opportunities for the more well developed regulatory jurisdictions to support but he said there are also lessons to be learnt from non-Western nations, particularly “questioning of assumptions that underpin what we do”.

An example, he said, is guest speaker Professor Ducksun Ahn, Vice-President of the World Federation for Medical Education, on how regulation in Korea is informed by Confucian values.

Fletcher said global challenges sessions will not just consider the mobility of the workforce, but also the increasing mobility of patients travelling overseas – particularly for dental and cosmetic care. One session will include a presentation on “how being a regulator helped make Dubai a hub for medical tourists”.

The conference will also highlight particular emerging “hot topics”, including challenges around cosmetic surgery and telemedicine. And it will explore the regulatory implications of the decision early this year of Canada’s Supreme Court of Canada to allow doctor-assisted suicide across the country under certain circumstances.

Fletcher acknowledges that Australia’s regulation system is “not perfect”, but he says it is strong and well functioning and the fact that we have a national, multi-professional scheme “in itself creates opportunities that other countries can only dream about”.

An example, he says, is the US where First Lady Michelle Obama fought for years to streamline licensing for various groups of military spouses, including many medical practitioners, who faced different rules and requirements each time they moved.

But he said it can be frustrating from his perspective that some debate about regulation is “not as well informed as it could be” and also that privacy and natural justice restrictions mean AHPRA sometimes has to respond in public “with one hand tied behind our back”.

“What tends to get reported are these cases that raise concerns and end up being the lens by which everything is viewed,” he said. “I think there is a real challenge and opportunity for us to do more to raise public awareness and understanding.”

Fletcher pointed to this video below featuring one of the conference’s guest speakers – Dan Faulkner, deputy registrar of the College of Physicians and Surgeons of Ontario – about the misconceptions faced by regulators. In it Faulkner says:

End of an era for decentralised surgical abortion care

Birthing on Country results prove the gap can be closed. Now such services need to expand

Restoration: an ethic to guide health reform in Aotearoa New Zealand and Australia

COVID and aged care: When you are in a deep hole, the most important thing to do is stop digging

PrevPreviousBubup Wilam: will this model of Aboriginal empowerment really fall through the funding cracks?
NextHere’s what we need to do to close the gap in Indigenous children’s eye, ear and heart healthNext