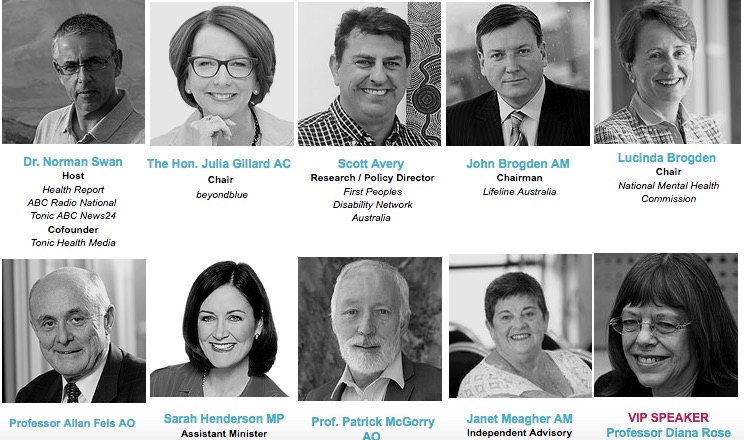 Speakers at the #NDISMentalHealth conference this week

Whether the National Disability Insurance Scheme (NDIS) is meeting the needs of people with mental health issues will be the focus of a national conference in Melbourne this week, hosted by Mental Health Victoria and Community Mental Health Australia.

Key themes highlighted in the conference program include:

In this preview article below, journalist Marie McInerney reports on the personal experience of Melbourne research assistant Dave Peters, describing how the transition to the NDIS stripped away supports that have been critical to his recovery over the past decade.

Melbourne researcher Dave Peters had a breakdown more than ten years ago, when he was 28, and ultimately ended up with a diagnosis of bipolar after attempting suicide.

He recalls it took a couple of years of weekly psychiatric therapy before the psychiatrist mentioned “almost in passing” that Peters might find it useful to get in touch with an organisation called Neami.

It led him to some key support with a specialist mental health case worker and access to a range of social activities through the Support for Day to Day Living in the Community program. Having the whole support package overlaid with the principles of recovery oriented mental health practice “really changed my life for the better,” he said.

He learnt that “you don’t have to be free of symptoms to pursue life again, that recovery doesn’t necessarily mean being symptom free”.

This was a critical shift for Peters, who at the time had become “really isolated, cut off from pretty much everyone in my life, scared to leave the house”.

“Neami was there for me at a time in my life when I had nothing else,” he told Croakey.

“It gave me a way to reframe and rethink about my life in ways that (otherwise) I don’t think I would have made the kind of changes in my life that I have since.”

Since then, he has been able to rebuild a life with strong purpose and participation.

As well as being Consumer Co-Chair of the Research and Evaluation Committee at Neami National and a research assistant at the Brotherhood of St Laurence, Peters is a regular guest speaker at three Melbourne universities.

He will present at the NDIS & Mental Health Conference on the need for NDIS access to physical health services for people with mental health issues, given the high prevalence of coexisting physical and mental health conditions.

But his own journey hit a huge barrier earlier this year when a difficult transition to the NDIS stripped him for months of the supports that have aided his recovery over the past decade.

“It was devastating,” he said.

Some of Peters’ story is particular to arrangements for the NDIS rollout in Victoria, where the former Coalition State Government opted to pay for its share of the NDIS by defunding the state’s pioneering MHCSS sector.

“However, earlier this year, with a deeper understanding of the service design of NDIS mental health core supports, we believed that Me Well wasn’t able to offer a genuine continuity of support to consumers receiving core supports without the financial subsidies of Neami National,” a spokeswoman said.

“The financial challenges of the NDIS environment in combination with a commitment to our vision and mission drove the decision for us to withdraw from providing NDIS core supports.”

Neami said the wellbeing and continuity of support for consumers was always its first priority and it worked closely with consumers and families to manage their transition to another provider.

However, Peters said that the way supports were listed on his NDIS plan – where the funding was tied specifically to the discontinued program – meant that he could not access NDIS core supports from Neami or seek support from elsewhere.

And it has taken seven months to get the NDIS to review these elements of his plan, he said.

Peters has not been alone in experiencing a difficult transition.

According to a recent report from Mental Health Victoria, the peak body for the community mental health sector, only a very small proportion of the estimated 150,000 Victorians experiencing severe mental illness each year will be eligible for the NDIS, leaving terrible gaps in support.

“The gaps will be found most severely in community mental health services which are critical to psychosocial support and recovery – helping to keep people’s relationships intact, maintain safe housing, manage physical health, and help them to stay at work or connected to the community,” it said.

Community Mental Health Australia executive director Amanda Bresnan said Peters’ experience in transitioning to the NDIS is not confined to Victoria, but echoes the experiences of people with mental health issues across Australia.

Like him, they are also struggling with long delays in reviews of their NDIS plans and the need to also access support for chronic physical health issues that are closely associated with mental illness.

“Dave is a really compelling example of what is happening across the country,” she told Croakey ahead of the conference.

“There is a particular situation in Victoria with community (mental health) funding, but his experiences of delays in the review process and the challenge he’s faced as someone with a mental health related chronic physical health issue are equally relevant nationally,” she said.

Growing concerns about the failure of the NDIS to meet the needs of people with severe and persistent mental health issues turned to some relief earlier this month when the Federal Government announced a new ‘psychosocial disability stream’ for the NDIS to provide a “better pathway and support” to about 64,000 Australians expected to be eligible.

Bresnan said this was welcome and that mental health groups recognise that the NDIS is a huge new scheme and will have necessarily have failures and glitches as it is rolled out.

But she said that it’s yet to be proven that recognition of the issue at senior levels in the NDIS will trickle down to services on the ground.

In the meantime, the teething problems, failures and gaps come at an enormous cost to those who need specialist support.

“They say it takes time to get things right, but in the meantime people are being really damaged,” Bresnan said.

Peters said the toll on his wellbeing of losing critical services as part of his transition to the NDIS has been huge, but so too has the actual process of applying for support under the NDIS, which was not initially envisaged as being for people with mental health issues.

It was hard enough saying goodbye to a service that supported me through some of the biggest changes and challenges in my life, but then going through the stress of the bureaucracy and the process of the (NDIS) planning meeting added to (the distress).

Services like Neami (work) through the recovery model, where all the focus is on what are the good things in your life, what are your strengths.

With the NDIS, you have to tell them how crap your life is. It’s very much about highlighting your deficits and what you don’t have and how bad your life is and could be.”

Soon after he lost the service support, Peters went to a national conference of suicide survivors. It was a great event, but in retrospect he thinks it was “probably not a wise choice of mine to attend at a time when I was already feeling pretty vulnerable and stretched”.

“I was in a pretty bad place after that,” he said.

This month Peters finally had a review meeting with his NDIS planners and, while resolution is still some way off, he is “cautiously optimistic” it will lead to agreement to fund better support services. Whether or where those services still exist in Victoria, he’s not yet sure.

But even if it does work out well, he worries about the toll that gets exacted along the way, and what happens for people with significant mental health issues who are not able to advocate for themselves in the way he can.

Over recent years, Peters was involved in research conducted at the Melbourne Social Equity Institute into the trial of the NDIS in the Barwon region, in regional Victoria, which found that while some people were better off under the NDIS, the pace of its rollout was leaving some people behind.

He said one of the main takeaways was that “to be able to access the NDIS, you had to be very knowledgeable to navigate the system and people with a well informed advocate had far better outcomes than those without”.

As a result he went out of his way to educate himself about the system, personally and professionally. “But,” he adds, “even with that I feel out of control and pretty powerless really.”

• Croakey will ask the National Disability Insurance Agency to respond to the concerns raised in this article.