In her final report from this week’s Australasian Fetal Alcohol Spectrum Disorders (FASD) conference in Brisbane, Mardi Chapman examines some of the political and policy challenges ahead.

She also profiles some creative responses to FASD from Indigenous communities, including the beautifully presented and engaging book, Children of the Grog.

30 years on: is the timing finally right for change on FASD?

Hope was probably the winner at the Australasian FASD conference. While there was certainly evidence of frustration at the slow pace of change since FASD was first described in this country 31 years ago, there was also optimism that the issue will be on the political agenda.

The conference opened with a video message from Senator Fiona Nash, Assistant Minister for Health with responsibility for alcohol and other drugs.

And given that Indigenous communities are disproportionately affected by FASD, there was acknowledgment at the conference that Prime Minister Tony Abbott has personally taken on responsibility for Indigenous affairs.

Federal Liberal MP Dr Sharman Stone, who chairs the standing committee on Aboriginal and Torres Strait Islander Affairs, and is a long-standing supporter of the fight against FASD, also presented at the conference.

Dr Stone warned that momentum had to rebuild since the change of government in September, but she was confident that it would.

“We had bipartisan support for action in 2011 and the 19 recommendations of the House of Representatives Inquiry in 2012 offered us a plan for a sustainable, whole of government approach.”

However, action stalled when the Labor Government’s funding promise of $20 million coincided with the government being prorogued for the election.

“I will make it my job to refocus on FASD as a human tragedy. It is a tragedy for a nation to see children being born without their optimal intelligence or cognitive capacity and ultimately, the human and financial costs on the community,” Dr Stone said.

“I have no doubt that with a caring government and particularly with Indigenous wellbeing and ‘Closing the Gap’ centre stage, then we will see some action.”

Dr Stone said it was an anomaly that Australia was justifiably proud of introducing plain packaging of tobacco products yet had not moved on the alcohol industry’s marketing practices.

“The International Charter on the Prevention of FASD made the point that any alcohol beverage companies who target women of childbearing age, and who fail to include information on their product labels about the risks of drinking alcohol while pregnant, should then be held accountable for the consequences.”

She said apart from the extraordinary power of the alcohol industry in Australia, other complex issues to be addressed included:

Size does matter – at least when it comes to the effectiveness of health warning labels on alcohol products – and the effort by the alcohol industry to take some responsibility for alcohol related harm has been underwhelming.

According to Sarah Ward, senior policy officer at the Foundation for Alcohol Research and Education (FARE), the voluntary scheme for alcohol labeling appears to have failed on several measures.

While the proportion of products with labels is up from just 16 per cent in 2012, it still remains unacceptably low two years after the launch of the voluntary labeling initiative.

The physical size of the health warning labels on alcohol is too small to be effective. Ms Ward said in order to be effective in changing behaviour, labels had to first be big enough to be noticed. They also needed to be positioned prominently and include both a symbol and text with consistent messaging and a recommendation for action.

She said the alcohol industry had vigorously resisted warning labels since the first application for a scheme in 1996.

The industry has argued against the evidence for labeling and the need for a mandatory scheme. They have also argued the public health consequences of pregnancy warning labels could be negative if women were made anxious or fearful about their alcohol consumption.

Progress on the evaluation of the voluntary labeling scheme, scheduled for March 2014, is likely to have been slowed down by the change in government.

A consensus statement from the conference will soon be issued to all state and federal health ministers in Australia and New Zealand to highlight the priorities for action on FASD.

The statement will also be distributed to FASD stakeholders through relevant non-government organisations, professional associations, services and agencies.

It will also be submitted for publication in a peer-reviewed journal.

Foundation for Alcohol Research and Education (FARE) chief executive Mr Michael Thorn said the statement called for adequate funding to address the significant gaps in the prevention, diagnosis and management of FASD.

“Most of the key issues about FASD are now known, they just need to be acted on.”

The statement includes calls for: 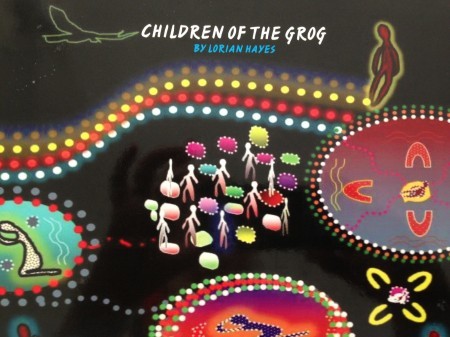 The Australasian FASD conference profiled many innovative programs working to reduce FASD and its impact in the community.

But it was the richness and colour of the Indigenous resources that particularly impressed.

Appearing at the conference was Mathias, a puppet and the surprising star of the short film Barkly Fights FASD (see the clip below).

The community written and produced film out of the Barkly region in the Territory was designed as a catalyst to generate community discussion on alcohol use in pregnancy and FASD. Anyinginyi Health Aboriginal Corporation can be proud.

Also at the conference was a new book written by Lorian Hayes, a Bidjera woman from Central Queensland who has received international recognition for her work on FASD.

Children of the Grog has been a labour of love for her whole family who contributed the art for the book. Featuring the observations of Waragan the Old Crow and other characters including Bawurra the red kangaroos, Budbrrda the echidna, and Bungani the plains turkey, it’s a delightfully written but important story.

Designed to be used in schools and communities to raise awareness of FASD and other alcohol related harms, it has the appeal of a colourful children’s book but also has messages for adults about Indigenous culture, colonisation, and community resilience.

The book and other resources are available through http://www.nofasd.org.au

• You can see all of Croakey’s coverage of the conference here.

PrevPreviousMob on the margins: getting the messages to services and those at risk
NextAre we moving towards yet “another failed experiment” in Indigenous affairs policy?Next