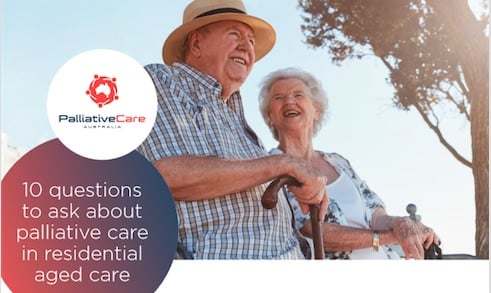 Conference to spotlight gaps and inequities in palliative care

Implications of the likely introduction of voluntary euthanasia in Australia will be a focus at the biennial Australian Palliative Care Conference in Adelaide this week.

Victoria looks on track to allow people suffering with an advanced and incurable illness, disease or medical condition to be able to seek a medically assisted death from 2019. New South Wales is expected to follow with similar legislation.

The dramatic shift poses important questions for palliative care which, according to the World Health Organisation aims to improve the quality of life of patients with life threatening illness, and their families, through the prevention and relief of suffering and pain and other problems, physical, psychosocial and spiritual.

But, as journalist Marie McInerney outlines in the story below, there is much else on the agenda in palliative care beyond the momentum towards voluntary euthanasia in Australia – from “foundational” policy reviews underway through to grassroots innovations like Death Cafes to boost “death literacy”.

Among the priorities is a lack of adequate palliative care support in aged care services, which the Productivity Commission warns is exposing vulnerable patients and their families to “ridiculous, costly, traumatic and inefficient” hospital care instead.

McInerney will cover the conference for the Croakey Conference New Service and live-tweet from the event at @WePublicHealth using the hashtag #17APCC.

It’s a rare media interview or political meeting for Palliative Care Australia’s chief executive Liz Callaghan when euthanasia is not high on the agenda. 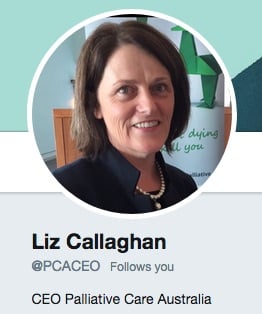 “It’s what happens all the time, with every interview I do, every politician I go and see,” she tells Croakey in the lead-up to the Australian Palliative Care Conference in Adelaide this week, from September 6-8.

“It’s about care of the whole person, the family, it’s about psychosocial support, spiritual support, about really exquisite pain and symptom management, about unfinished business – it’s about a whole range of things.”

But Callaghan says assisted dying will rightly be a big focus for the 800 delegates at this year’s conference, with moves in New South Wales and Victoria to become the first jurisdictions to legalise voluntary assisted death, or euthanasia as it is also known, since the Northern Territory’s laws were overturned in 1997.

One of the plenary sessions at the three-day biennial event will be a panel discussion to explore the ‘complex, difficult and emotional” implications for the sector if and when these new laws come in, from what happens to practitioners who are conscientious objectors through to questions of liabilities when there are “unintended consequences”.

“We want to explore this in a safe environment, while acknowledging that voluntary assisted death is still illegal across the country, and there are lots of diverse views, (around a) complex and emotional subject,” Callaghan said.

“It will be really good for the sector to be engaged in that discussion.”

But she said there are many other important issues to consider for the majority of Australians who will not choose assisted death but need a palliative care service system that can respond to their end of life needs and wishes.

That is particularly important for those who are currently “dying poorly” in residential aged care and for those groups who are currently missing out – for cultural, geographic, socio-economic and other reasons – on proper access to palliative care services.

All this comes at a time of “foundational” changes in the palliative care policy landscape, with the Federal Government’s National Palliative Care Strategy 2010 – Supporting Australians to Live Well at the End of Life now being updated.

Palliative Care Australia is also conducting a review of the Standards for Providing Quality Palliative Care for all Australians. Conference delegates will be asked to feed into both processes.

Few might have predicted the Productivity Commission as the agency to highlight big gaps in end of life or palliative care – defined as services for people who are likely to die within the next 12 months – much less to say that the funds to be saved on better care should not be the major consideration.

But in June it shone a bright light on failures and inequities in the system, particularly in aged care and hospitals, in its draft report on human services reform. 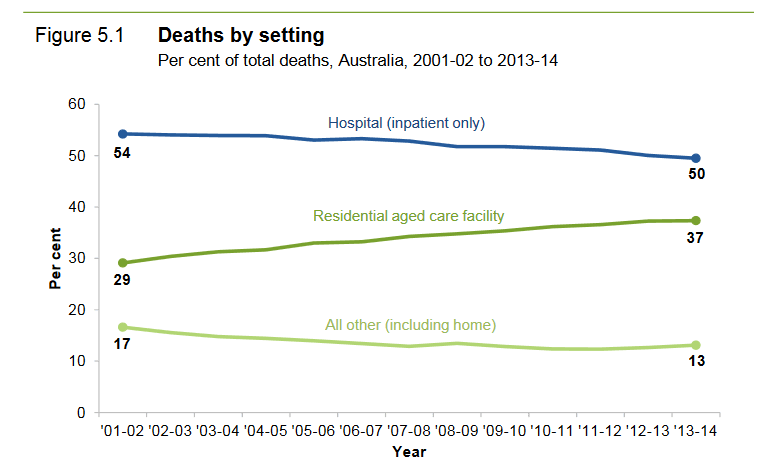 And in what will be another important focus at the conference, the Commission found that residential aged care is generally “ill equipped” to meet end of life care needs.

It reported that while four out of five residents of aged care facilities die in them, a lack of palliative care expertise and qualified staff to administer pain relief means residents often make “traumatic (and costly) trips to hospital to receive medical care that could have been provided in surroundings that are familiar to them.”

It said: “Some aged care residents die in unnecessary pain causing distress to themselves and the people who care for them.”

Without significant policy reform, tens of thousands of people will die in a way, and in a place, that does not reflect their values or their choices.

Their end of life journey will likely be punctuated with avoidable, or unwanted, admissions to hospital with the confusion, loss of dignity and loss of control that comes with it.

This is not acceptable.”

Lack of data is a big issue for the sector, but research analysis commissioned by Palliative Care Australia from the National Centre for Social and Economic Modelling (NATSEM) this year found that less than half of the 77,000 people who died in hospital in 2014-15 received palliative care during their final hospitalisation.

It also found that only four per cent of residents in aged care had a formal appraisal for palliative care and only 1 in 1,000 aged care patient encounters with GPs was palliative care-related.

In response, Palliative Care Australia and other peak bodies have produced a set of guiding principles, with the overriding message that palliative care “is absolutely core business” for aged care providers.

It’s also developed 10 questions for patients and their families or carers to ask of aged care services (see image at the bottom of the post).

Meanwhile the PCA is drafting a new chapter for the Federal Government’s Aged Care Roadmap, which astoundingly does not mention either end of life care or palliative care.

A plenary session at the conference on Friday will examine the issue.

With the theme ‘connecting with community’, the National Palliative Care Conference will urge both “top down and bottom up” approaches to palliative care reform.

It aims to capture some of the exciting grassroots work going on to promote “death literacy” like death cafes, death doulas, and a growing movement around natural burials in a session featuring “The Deathtalker” Molly Carlile, Groundswell Project director Kerrie Noonan and Dr Leah Kaminsky, author of The Waiting Room.

Keynote speakers at the conference include Canadian physician and academic Dr Alex Jadad, who describes his mission as to “unleash a pandemic of health“, New Zealand based grief therapist Liese Groot-Alberts and Australian chef Maggie Beer on ‘creating an appetite for life’.

Other plenary and keynote sessions will focus on pain and symptom management, including the use of medicinal cannabis and on “clinically futile” treatment.

A number of sessions will look at cultural issues particularly for Aboriginal and Torres Strait Islander people, where there is growing concern about the needs of the ageing Stolen Generations.

“Overall we’re trying to build connections with community and ways to integrate care in our community, whether that’s through technology or research or exploring innovative models of care,” Callaghan said.

The aim is to “take a public health approach to palliative care: community driven, bottom up, trying to create a movement in the community to say ‘this is the care we want, you need to respond with these service models’.” 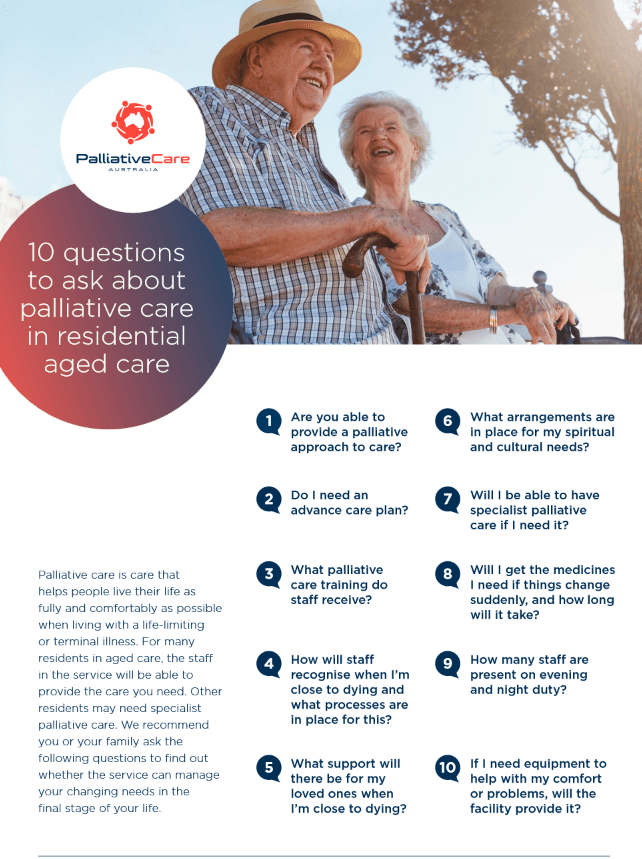 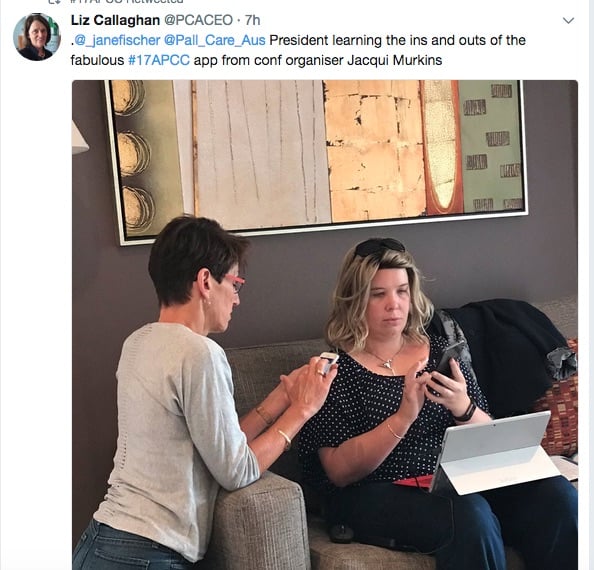 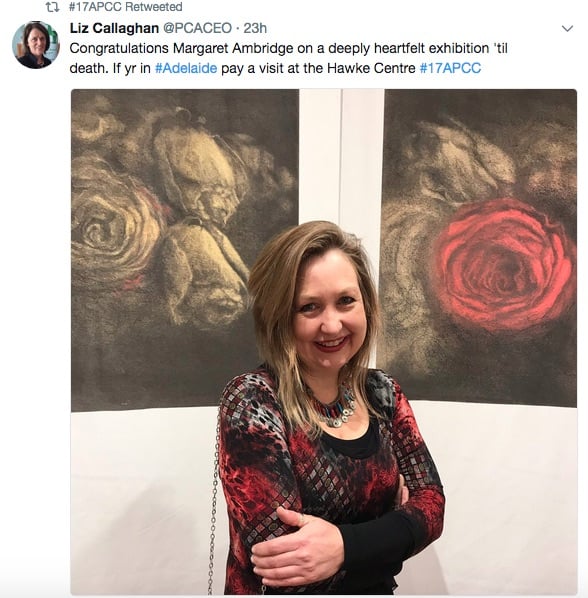 Read more about the exhibition here. 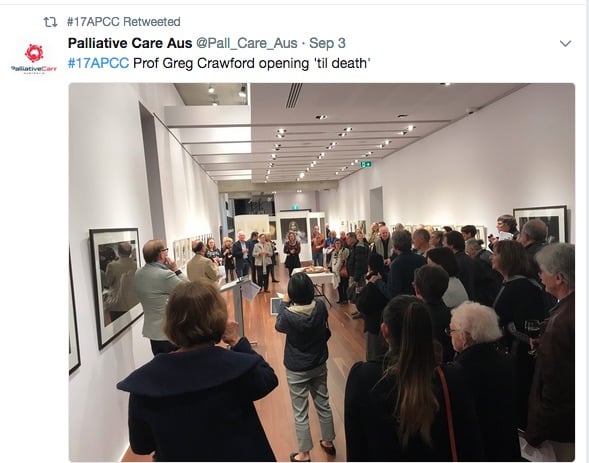 • Palliative Care Australia’s Palliative Matters website for excellent stories about living, dying and palliative care, including this story with Professor Gregory Crawford from the University of Adelaide, Distinguishing sadness and depression at end-of-life.

PrevPreviousWarm welcome for Clinton Pryor in Canberra, after an incredible journey
NextHow failing as Quit Man helped me to listen better with others about healthNext