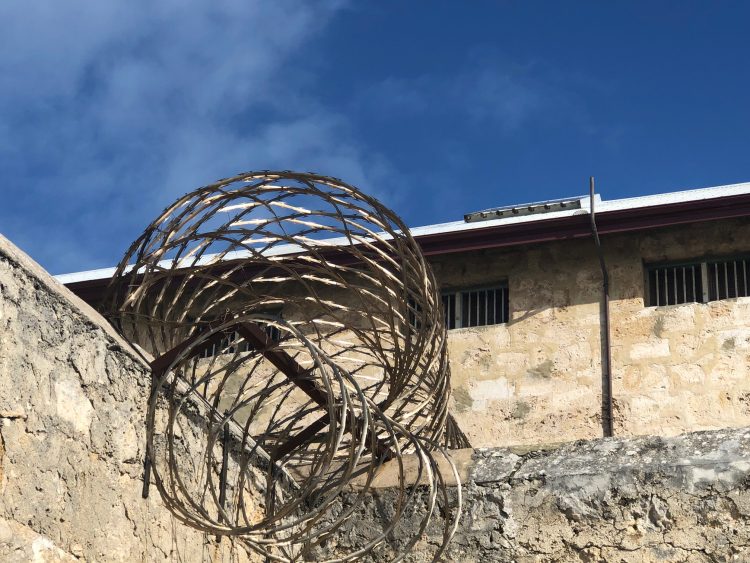 Confronting systems of injustice, and reporting on a “steely determination” for change

Dr Tess Ryan, an Indigenous woman of Biripai country in Taree, New South Wales, and a contributing editor at Croakey, marked the end of our #RuralHealthJustice series with a Twitter discussion on addressing failures and challenges to the healthcare of people in prisons, and their families and communities.

See her tweets and conversations below, with a focus on #RCIADIC30Years and stopping the over-representation of Aboriginal and Torres Strait Islander people in the justice system.

Bookmark the stories and podcast here. You can also read other work at Croakey by Dr Tess Ryan via this link, including her contributions to the #JusticeCOVID series.

Firstly I want to send my love and care out to the many people that are currently locked up, away from country, family and community. As a society we need to consider what this means for us as a country built on colonial practices involving incarceration.

Thirty years on from the RCIADIC [Royal Commission into Aboriginal Deaths in Custody] we are still waiting for recommendations to be implemented on deaths in custody. In those three decades prison populations have grown and rural prison complexes have become major facilities. People are still dying at the hands of this system.

The health and wellbeing of those inside is regularly negated within this system. The COVID era has demonstrated a lack of accountability for those in power to protect prisoners, who are just as, if not more, vulnerable individuals requiring basic needs of socialisation and health care.

I’ll be sharing some articles and info connected with #RuralHealthJustice. One recent article written by Nicole MacKee shines a light on the health gaps and barriers to support for those leaving prisons. It also talks about mob-led programs and solutions to assist in prevention.

Click here for more: Putting the spotlight on lethal gaps in health services for a remote community and prison.

Considering the many chronic health issues that Aboriginal and Torres Strait Islander people may deal with in both community and in prisons, I question why there is not a strong focus on continuity of care and why all the services appear so disjointed for those incarcerated.

Interestingly, you see similar issues re: continuity of care and transitioning in Child Protection and some Out of Home Care (OOHC) work. As a previous worker in the Foster care system, I saw many young people feeling their only choice was to transition to jail from OOHC.

But what upsets me most about that is that, for mob, it’s not bad enough that they’re going into a place that has a history (both current and past) of imprisoning them, with some never to come out, but the push to have mob off country makes health, visitation and survival harder.

This was just one of the recommendations from the Royal Commission that has been ignored…’where possible an Aboriginal prisoner should be placed in an institution as close as possible to the place of residence of his or her family’.

And the sizes of these mega prisons are an issue in rural areas in relation to health and wellbeing. Linda Doherty has written an excellent article here on the subject: Australia’s mega prison raises fears for prisoner and rural health.

Prison complexes such as the Clarence Correctional Centre (CCC) in Grafton are placed hundreds of kilometres away from areas where there are services to support families of those inside – CCC has a 1700 bed capacity. There is also little infrastructure to support those inside once they have left.

This recent @CroakeyVoices podcast gives some insight into the impacts of the prison system on mob, and features @MegBastard, Jeffrey Amatto and @MaloufDr: For rural, regional and remote communities, where is the justice?

Cate Carrigan discusses with them the many key issues such as racism within the criminal justice system, health services and cultural rehabilitation programs which are required to give more culturally appropriate service delivery in health.

We know racism is such a deeply embedded tool within the carceral system worldwide. Croakey has previously reported on these issues within the #JusticeCovid project in 2020. For more info on this series, click here. It has some insightful pieces written by @haveachattabs, Thalia Anthony and @Change_Record.

Questions with no answers

My personal connection to family and friends and the prison system is difficult – two of my Uncles were a part of this system. One of them lost contact with his entire family afterwards for 40 years, reappearing three years ago before passing.

I never got to meet him and could not attend his funeral last year due to COVID. The other is a much longer story. Many decades ago Uncle Dan and his brother John had a car accident. They’d both been drinking – Uncle John died, and Dan went to prison.

Dan didn’t get support inside for his grief and guilt, & this impacted on his health. When he came out he went through some hard years, struggles with addiction and loss of connection to family.

Nearly 20 years ago he began working to help men in the prison system that nearly killed him. Dan would visit them inside regularly. He died prematurely of a sudden heart attack on his way to Maitland prison to do this work. He was under 60 years old.

What impacts did the prison environment have on his health, what did the system do for his health (if anything, this was the 60s), and what was it like to go back in there to try to help those men go through what they did? Questions with no answers.

While some of those services and supports have improved and we know more of what goes on, there is still little transparency and so much more can be done.

Like most mob who work in academia, community organisations and write for media, these memories and questions become drivers for the work. We don’t want to see another one of us die inside, or have their lives completely knocked off its axis for decades because of it.

Rural prisons are growing in size and yet the infrastructure in these communities is not.

Services aren’t there to assist the families visiting their loved ones, housing isn’t available for them to move closer to these complexes. People coming out of prison have little in the way of supports for transitioning.

Once again government hasn’t considered the implications of the prison system overall. They’ve not considered the criminalisation that they employ on people in the first place.

Communities and organisations do the heavy lifting in supporting those inside and those that love them, waiting on the outside.

I would be interested to hear what others think about the health of prisoners, especially those incarcerated in rural and remote areas and mega prisons. We are moving closer to models from the US and yet governments are still not giving us up to date information.

We see too many news stories about deaths, too many inquests that come to nothing. We see ridiculous arguments about the criminal responsibility of a ten year old child, yet no genuine solutions on over-incarceration or support.

I want to know how their health is being properly managed, both before COVID and during. I want to now if they have protection against infection. I want to know if they are getting vaccinated. What do we think of us as a society if we don’t care about this?

How are their families coping having so little visitation with them now? How can we best support them and their kids? Why can’t we have a deeper discussion on abolition?

There are so many amazing people, communities and organisations that work tirelessly on these and other issues. Blak academics in the criminology space, communities like Roebouren and staunch people like @DebKilroy keep working because the fight is necessary.

I often wonder where we would be without this hard work and scholarship. But it is also steely determination for change. Isn’t that what we all want?

And we all have stories that connect to this work. We feel it whenever we see yet another issue relating to deaths in custody or something to do with the prisons. I mentored a young man in Canberra many years ago who was getting his life together before getting locked up.

He was beaten by other prisoners and came close to dying. His family and community fought for him not to be returned as his injuries were so severe but they sent him back. He later died in prison. It still impacts on me and my work.

We miss all these people. I miss my Uncles as I have none left living and I miss this young lad. But I’m also angry that this even needs to be said and the anger drives people to keep talking about this and push for changes.

I urge everyone to read the powerful work that has been done in the #RuralHealthJustice space in Croakey and follow the people on here who work every day to change this terrible system. Follow the organisations and support them in their campaigns. 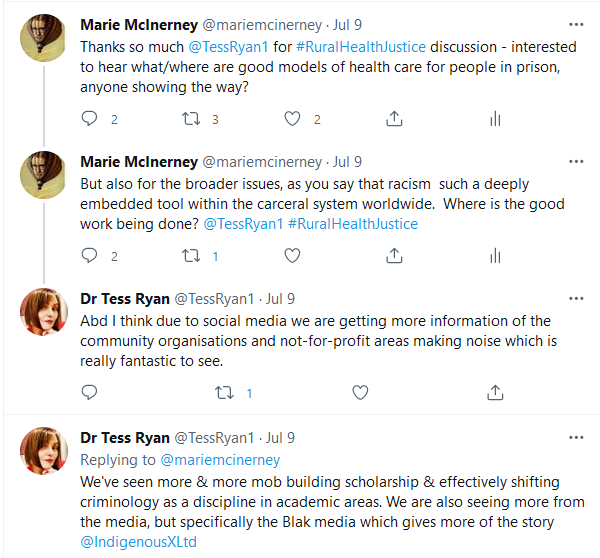 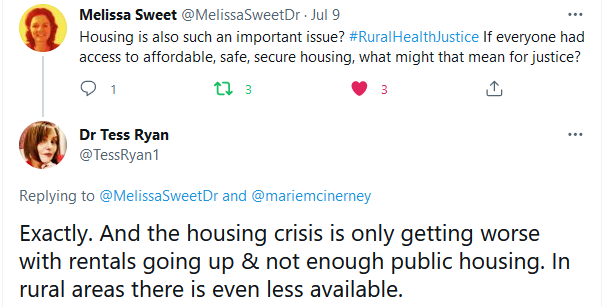 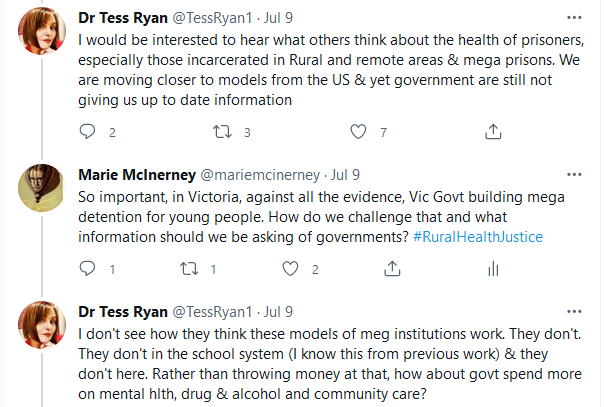 Analytics of the #RuralHealthJustice Twitter conversation led by Dr Tess Ryan on Thursday 8 July, via Symplur.

The PING Program was set up in 2020 to support regional broadcasters and publishers to maintain or increase their production and distribution of public interest journalism in regional Australia during the COVID-19 pandemic.

PrevPreviousStop the snark and politicking. And get on with delivering an effective public health response
NextHeal Country puts spotlight on social and emotional wellbeing for Aboriginal and Torres Strait Islander peopleNext