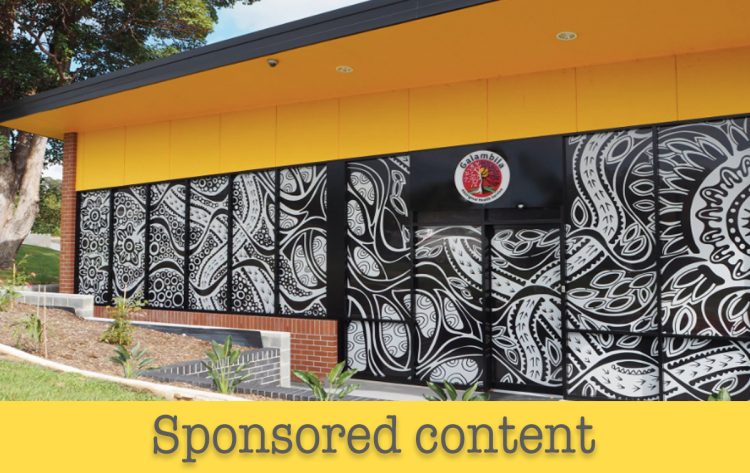 As bushfires and heavy smoke plagued the NSW mid-north coast, Galambila’s connection to Country and community shone through.

This article is published by Croakey Professional Services as sponsored content. It was created in collaboration with the Aboriginal Health and Medical Research Council (AH&MRC) of NSW, which funded the #CommunityControl Success Stories series.

For weeks last year the skies over Galambila were “almost apocalyptic” as devastating bushfires continued to burn nearby, threatening local community members on the other side of the coastal highway in northern New South Wales.

By day and by night the sun and the moon glowed blood red as acrid smoke lay low and dark over the area, exacerbating respiratory issues and raising longer-term health and safety concerns for a summer that was still to come.

As coordinator of Ready Mob, the Tackling Indigenous Smoking program at the Galambila Aboriginal Health Service at Coffs Harbour, Tyson Morris is usually focused on a different sort of smoke.

But this had been a devastating and early start to the bushfire season.

“The amount of smoke up here is really hazardous to health,” he reported, as the bushfires burnt into their second week and the tropical region had gone without rain for more than a month.

“You can hear it in people when they walk in, they’re really shorter of breath. I feel it myself.”

Galambila rallied in response to this early season emergency, rescheduling appointments in case acute demand grew and setting up rooms with ventilation.

Morris and others took to social media, getting messages out to community via Facebook particularly on the need to be prepared and stay safe: to leave if urged to do so by emergency services, and to be mindful of their mental and physical health as the bushfires burnt on.

Morris is a Gumbaynggirr man, born and bred in the area around Coffs Harbour, where the Great Dividing Ranges meet the sea.

“We all take pride in the area,” he says of the 3,500-strong local Aboriginal community served by Galambila, which in late 2018 marked its 20th anniversary and the arrival of new CEO Reuben Robinson, previously a long-standing board member.

Its response to the bushfire risks is a measure of how Galambila seeks to work: connected to country and community and looking to prevention, primary responses, and to the long-term on a range of health issues, be they physical, social, emotional or environmental.

It also has a strong focus on the wellbeing of its own teams, Morris says.

“The working environment here is a really healthy one,” he says. “There’s a lot of support internally here for our staff and our team members. It’s a place where you can feel you’re valued.”

Galambila’s approach, and the healthy dose of humour it brings to its work, has contributed to outstanding successes in recent times.

Clients sitting in the waiting room have been able to track the progress of the service’s innovative efforts to boost kidney health checks and flu vaccinations, egged on by plenty of puns and caricatures of staff to literally put a face to the messages.

The program, which maps and tracks a suite of national KPIs to identify areas for improvement in terms of how Galambila delivers services, identified in 2016 that rates of flu vaccination uptake among the community were low.

A subcommittee was formed with representatives of all teams – from reception and finance through to clinical and administration – to come up with strategies to improve uptake. This ensured input and buy-in across the organisation.

Strategies included fun and funny health promotions, plus internal action such as a Myth Busters for all staff that aimed to address mixed messages and myths that were preventing people from vaccinating.

Inspired by the results, the service took a similar approach this year to kidney health checks. In mid-2017, Galambila’s rate was “sitting at around 10 percent of eligible people” screened over the past two years, Braithwaite explains.

Two years on, it’s at around 45 percent of that population now, more than double the state average of 20 percent, “so we’ve done really well, relatively,” he says.

“If someone comes in with a sore knee, you tend to just focus on the sore knee, but because we had had all these broad discussions that helped elevate kidney health into our minds, we made sure to raise the need for checks in consultations with those patients who were eligible.” 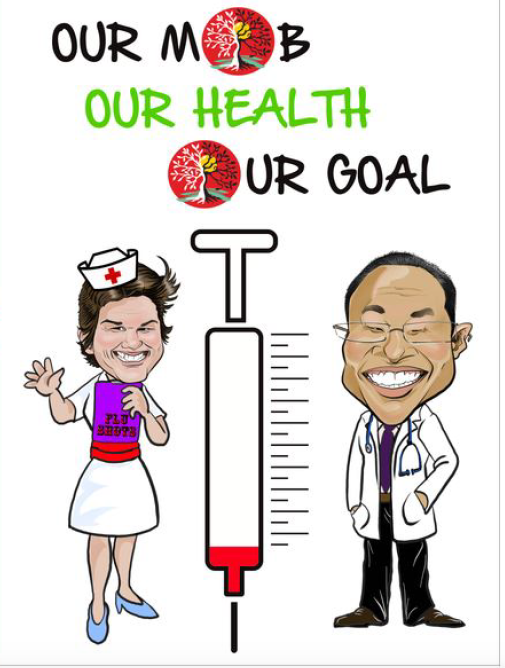 A community survey done as part of the review process has generated rich insights, resulting in a ‘four pillars’ approach to Health Assessments, considering the perspective of the patient, the population, the service and the workforce.

A key message from the community, which is now being embedded into responses, was that they wanted a bigger focus on social and emotional wellbeing, as well as physical health.

Galambila has also consulted closely with the community on mental health, looking in particular to make RUOK Day more meaningful and effective. It sought advice from the local Elders’ group on culturally appropriate ways to approach mental health concerns, and what language to use.

The result? A response that’s community-led rather than generic or mainstream and where – again, unsurprisingly — humour has been key. 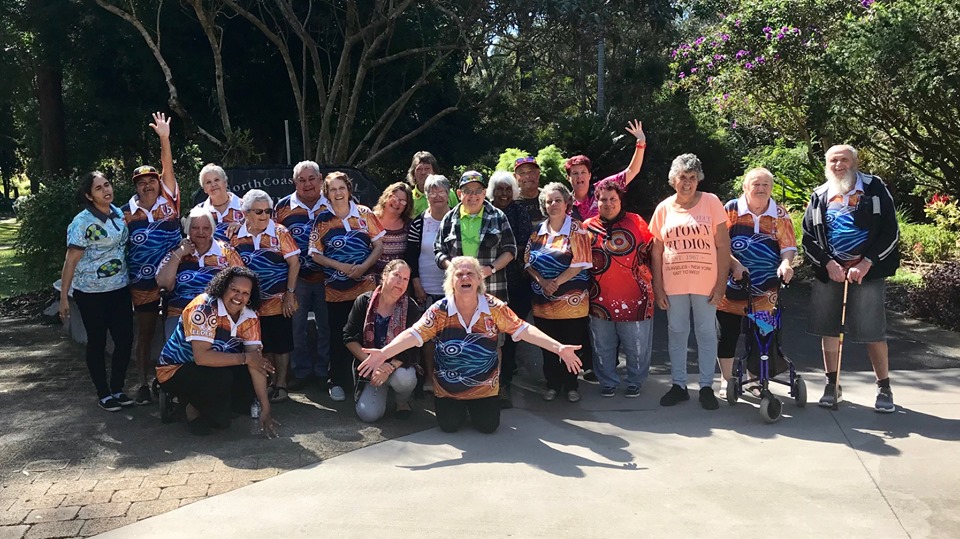 Mr Gross Mouth often does the talking for Ready Mob’s Tyson Morris, graphically depicting the effects of smoking: dried lips, ulcers, cancers, a ‘furry’ tongue from the settlement of tar and plaque, and gingivitis.

“I like to put a lot of humour into it, that’s how I like to deliver sessions,” says Morris of his larger-than-life prop.

Ready Mob (which stands for Really Evaluate And Decide Yourself – Make Ourselves Better) delivers hundreds of Smokerlyzer tests at events throughout the region, from sports fixtures through to the Elders Olympics held this year at Port Macquarie.

Similar to a random breath test for alcohol, the Smokerlyzer measures the amount of carbon dioxide in a person’s bloodstream, providing some key and very personal statistics as to how addicted to smoking they are and, often importantly, how much that level of smoking is costing a year financially.

Morris has seen people give up “cold turkey, on the spot” at his education sessions. “One was 14 or 15 years old, I told him smoking can affect all different parts of your body, including your reproductive organs,” he says. “That pushed him over the edge.” 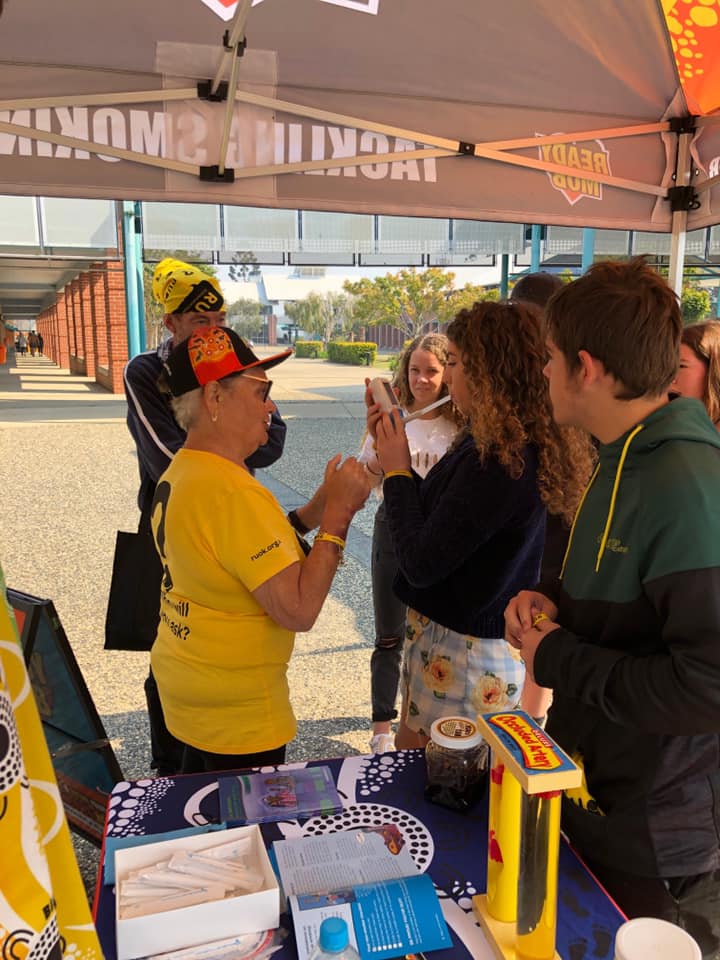 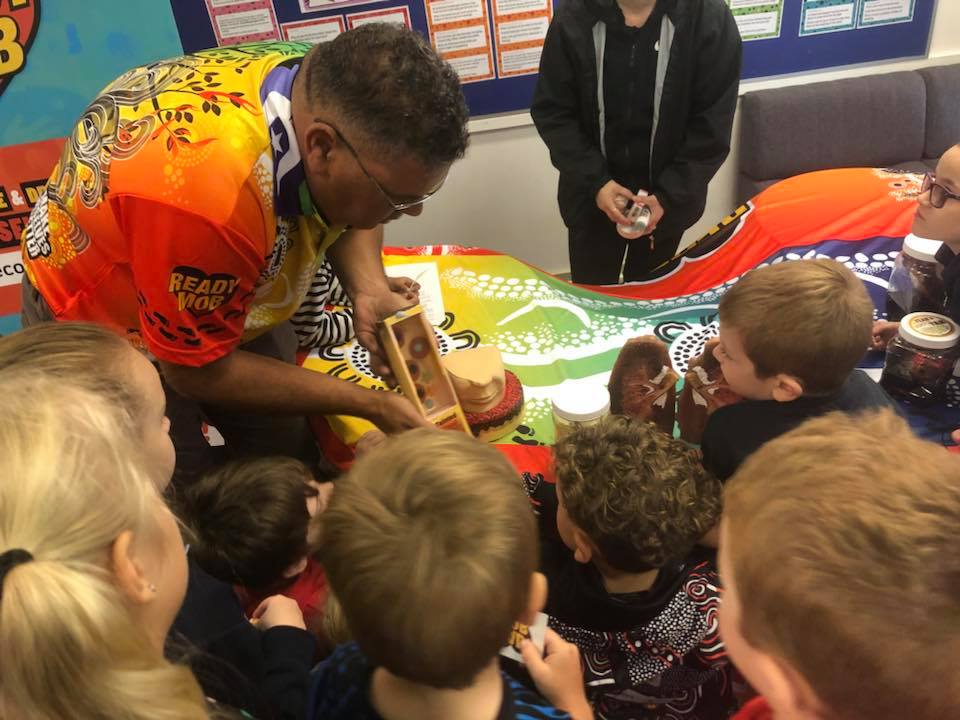 Half an hour down the road from Galambila’s Coffs Harbour facility is the historic town of Bowraville, where the local Aboriginal community are still waiting for justice following the murder of three young children in the early 1990s – four-year-old Evelyn Greenup, her cousin Colleen Walker, and Clinton Speedy-Duroux, both aged 16 .

Galambila recently secured funding to establish the Bowraville Youth Hub, a focus of fun and activities for young people. The hub is open for community meetings and events, for other community services and stakeholders to tap into. It has a gym, homework space, laptops available for usage, free wifi as well as a games, art and educational support areas.

The hub is also heavily involved in the annual Bowraville Memorial Cup, a regional touch footy competition aimed at helping the community to heal and to stem the tide of intergenerational trauma that is still prominent in the Bowraville community today.

It arose from the recommendations of the NSW Parliamentary inquiry into the Bowraville murders, and last year’s attendance at the Memorial Cup superseded expectations, with an attendance of about 1,200, among them about 750 young people.

For Tyson Morris, an interest in how the body works was sparked in his early 20s when he started  exercising, body-building and going to the gym.

Seeing his own body improving, and in action, prompted him to apply for a job at Galambila as a health promotion officer, “my first Ready Mob job”.

After completing his Certificate IV in Aboriginal Primary Health through the Aboriginal Health and Medical Research Council (AH&MRC) Morris moved into clinical work, something he found both easy and rewarding.

Last year, he was thrilled to take up the Ready Mob coordinator role, where he gets to help empower community members to make their own informed decisions about health.

“It’s seeing people realise: ‘this is my health, my body, I’m going to do what’s best for me’,” he says.

Asked what his secret is, Morris says it’s about “the information that is provided and how it’s done. You can tell someone something but unless it directly correlates with them, they won’t necessarily pay attention. If you can customise it, then that can really hit home.”

Michelle Sinclair is a Gumbaynggirr woman who has worked within community “since day one”, starting off in aged care.

She had always dreamt of working at the Galambila Medical Service: “because I’m a local, because I love the health sector and particularly because I have a passion about the health of our Elders, looking after them and giving back to them for what they did for us as we grew up.”

Sinclair is regarded by clients and colleagues alike as going “above and beyond” her duties, dedication that last year won her a prestigious prize in the Grace Roberts Community Development Awards. Named after Bundjalung woman Grace Roberts, who was a tireless community advocate, the awards celebrate those who have made a significant contribution to enhancing the quality of life of Aboriginal people in the Coffs Harbour area.

“Just seeing amazing changes that can happen for clients going through their health journey, when they can be empowered to live healthier lives, I love that, that’s what motivates me,” she says adding that clients are happy to come into Galambila when they’re sick because “they know they’re going to be well looked after”.

“We’re not co-workers, we’re more of a family here. We’re all here to support one another, we all work together because we know what’s most important is the client’s health. We all have that one goal: empowering our mob to live longer and healthier lives, to close that gap.”

This article was written by Marie McInerney and edited by Amy Coopes, on behalf of Croakey Professional Services. It was sponsored by the Aboriginal Health and Medical Research Council (AH&MRC) of NSW, which had final say over the content.

Health Journey Mapping: having a yarn about health