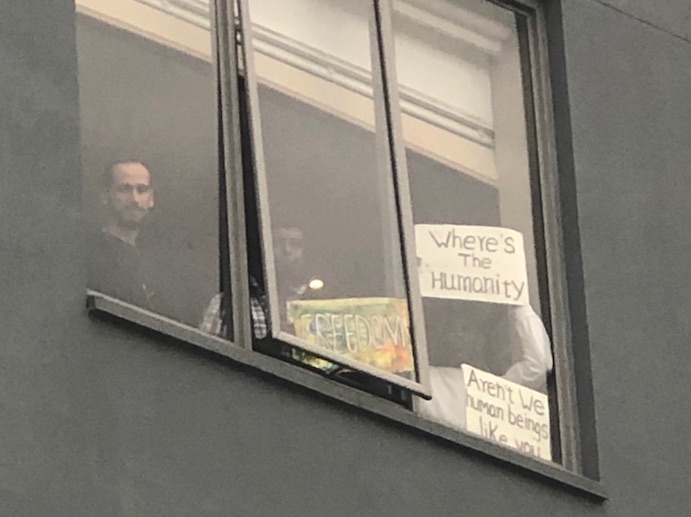 Protest last weekend at the Mantra hotel in Melbourne, where dozens of asylum seekers, including many who came via now discarded Medevac legislation, have been protesting their crowded living conditions in the coronavirus pandemic. Photo by Marie McInerney

The COVID-19 pandemic presents an opportunity to rethink Australia’s mandatory and indefinite detention policies, for the sake of human rights and health, according to Alison Battisson, founder of the law firm, Human Rights for All. 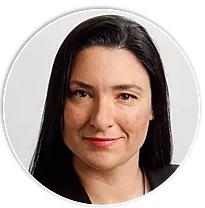 Australia is one of the global success stories of the COVID-19 pandemic, but there’s been a high risk blind spot that experts say creates an unacceptable risk for infection and transmission.

While the feared outbreak of COVID-19 in crowded immigration detention facilities has not yet happened, the Federal Government’s decision to excise detained populations from physical distancing and self-isolation directives represents a breach of their health and human rights.

This is all the more inexplicable in light of well-established and extensively-used community options for what the Australian Border Force states is ‘administrative not punitive’ detention.

A week after the World Health Organization (WHO) declared a global pandemic on March 11, Australia’s peak infectious diseases bodies – the Australian Society for Infectious Diseases (ASID) and the Australian College of Infection Prevention and Control (ACIPC) – issued a statement specific to immigration detention facilities.

The message was unequivocal: “We urge the Commonwealth government to consider the release of detainees into suitable housing in the community if they do not pose a significant security or health risk”.

The organisations further noted that the only viable alternative was accommodation in single rooms with their own bathroom facilities, and said: “While this would not fully address the risk associated with COVID-19, and it certainly would not be as effective as reducing the overall numbers in immigration detention facilities, it would go some way to reducing the risk and could be considered the absolute minimum necessary step”.

The ASID/ACIPC statement reinforced what we already knew. It’s impossible to practise safe physical distancing in immigration detention, where around 1,400 people share cramped common spaces for showering, eating, activities and exercise and live in bedrooms of up to 20 people.

The advice was rapidly endorsed by multiple public health, refugee, medical, legal, and human rights bodies who highlighted that “the conditions are ripe for catastrophe”.

At the beginning of the pandemic, Human Rights For All and other firms put forward clients who might be suitable for transfer from detention into the community, either on bridging visas or community detention (a much less restrictive arrangement where more vulnerable people live in assigned housing).

After a couple of weeks, no decision was made, despite a small number of people detained via visa cancellation being released. Last week, the Department confirmed that ministerial intervention request processing has been suspended due to COVID-19.

What led to this decision?

It appears the Department of Home Affairs decided that rather than taking the advice of ASID and ACIPC, it would follow guidelines (available here) published by the Department of Health’s Communicable Diseases Network Australia (CDNA) on March 31, 2020.

While this sounds reasonable, ‘the CDNA Guidelines for the Prevention, Control and Public Health Management of COVID-19 Outbreaks in Correctional and Detention Facilities in Australia’ made no mention of the impossibility of physical distancing in these crowded places, instead placing explicit emphasis on how to ‘plan, prepare, detect and respond to COVID-19 outbreaks’.

There was no mention of physical distancing in the guidelines, despite the 1.5m rule featuring prominently in public health messaging throughout the rest of the community. The guidelines also made no mention of placing people in single rooms, except in the event of testing or when there are ‘inmates with symptoms’.

On May 28, we made a submission to the Senate Select Committee on COVID-19, raising concerns about the Department of Home Affairs’ reliance on detention-specific guidelines that do not address the impact of crowding in detention facilities.

Three days later, we noticed that the guidelines had been removed from the Department of Health website, later noting ‘This document is currently being updated’ and referring the reader to the CDNA National Guidelines for Public Health Units – Coronavirus Diseases 2019 (COVID-19).

As of June 16, there is no updated version of the ‘the CDNA Guidelines for the Prevention, Control and Public Health Management of COVID-19 Outbreaks in Correctional and Detention Facilities in Australia.’

When the new version appears, we expect that the issue of physical distancing will be addressed, especially as Australia enters winter and an increase in flu-like symptoms across the community is highly likely.

Despite there being no statutory framework outlining minimum standards for detention conditions, the Australian Government has legal and humanitarian obligations to the people it detains, especially those whose freedom of movement, association and self-determination is so heavily curtailed, in some cases for over 10 years.

While there has been some shifting of people within and between centres, and some staggering of meal times, these measures have not been sustained and have fallen far short of the minimum physical distancing standards advised by government authorities.

The Public Interest Advocacy Centre’s recent group complaint, lodged with the Commonwealth Ombudsman, has called “for an urgent inspection of immigration detention facilities and alternative places of detention, to examine the adequacy of conditions and measures being taken to mitigate and manage the dangers posed by COVID-19 to people in detention and staff”.

This lack of transparency and the unwillingness to act on reasonable recommendations from detention regulators is cause for concern.

With the Government’s proposed re-introduction of the ‘Prohibiting  Items in Immigration Detention’ Bill, we see further disregard for detainees’ mental health and wellbeing through plans to classify phones as contraband, thereby further weakening connection with loved ones and legal representatives during a pandemic that has already seen visits curtailed.

Crowded conditions in detention persist and fears of a second wave have been sparked by outbreaks in Singapore and Iran, and more recently China.

The COVID-19 pandemic presents an opportunity to act in best faith about the nature of administrative detention and rethink Australia’s mandatory and indefinite detention policies, which have no parallel worldwide.

It also presents an opportunity to fully realise our role as signatory to the Optional Protocol to the Convention Against Torture and Other Cruel, Inhuman or Degrading Treatment or Punishment (OPCAT) and the International Covenant on Civil and Political Rights (ICCPR).

• Before establishing Human Rights for All, Alison Battisson worked as a corporate lawyer for top tier firms in Australia, the UK and Indonesia. She has also worked with various volunteer organisations in Zimbabwe, Australia and the UK. 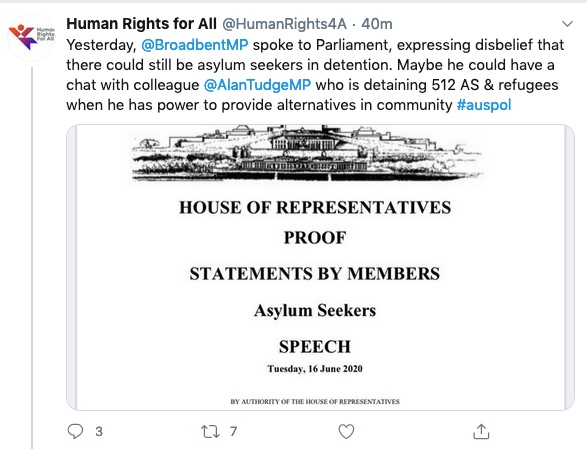