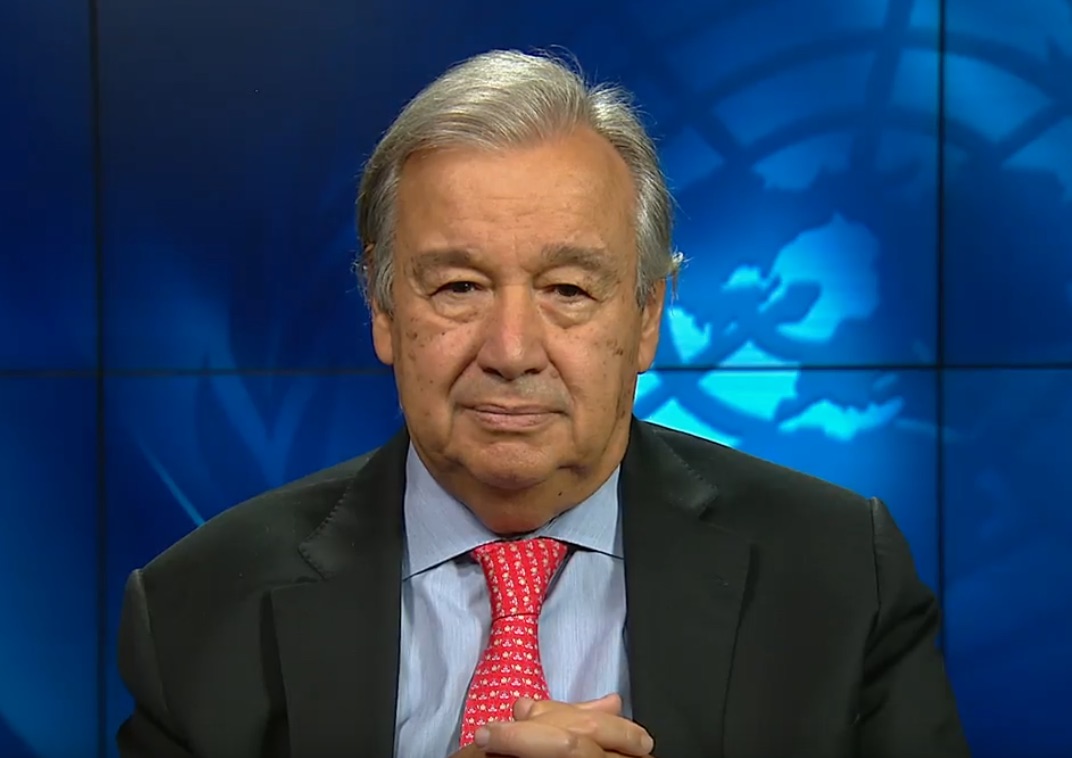 António Guterres, during an interview for the Covering Climate Now collaboration

Cooperate on climate or we will be ‘doomed’: United Nations chief

Investing in green energy creates three times more jobs than investing in fossil fuel energy, according to United Nations Secretary-General António Guterres, in a powerful call for governments to address climate change and inequalities, and to rebuild from the pandemic into a “new normal”.

The story below is published as part of the global media collaboration, Covering Climate Now, of which Croakey Health Media is a member.

World powers must pull together and retool their economies for a green future or humanity is “doomed”, UN chief António Guterres has warned, telling AFP that failure to control the coronavirus pandemic illustrates the danger of disunity.

Before the virus struck, 2020 was billed as a pivotal year for the plan to dodge the bullet of catastrophic global warming, with high profile summits planned to catch a wave of public alarm over the future of the planet.

The coronavirus crisis may have shunted climate into the sidelines as nations launched unprecedented shutdowns to try to slow its spread, but Guterres said the need for climate action was more urgent than ever.

In a searing assessment of the international response, Guterres said the pandemic should sharpen governments’ focus on cutting emissions, urging them to use the crisis as a springboard to launch “transformational” policies aimed at weaning societies off fossil fuels.

I think the failure that was shown in the capacity to contain the spread of the virus – by the fact that there was not enough international coordination in the way the virus was fought – that failure must make countries understand that they need to change course.

They need to act together in relation to the climate threat that is a much bigger threat than the threat of the pandemic in itself — it’s an existential threat for our planet and for our lives.”

The UN chief said “pollution and not people” should be taxed and renewed calls for nations to end fossil fuel subsidies, launch massive investments in renewables and commit to “carbon neutrality” – net zero emissions – by 2050.

His comments come as the landmark Paris climate deal goes into effect this year, kicking off efforts to cap the rise in temperature to “well below” two degrees Celsius (3.6 Fahrenheit) above pre-industrial levels.

The accord was already on a knife edge before the pandemic, with doubts over commitments from major polluting nations and concerns that it is still far short of what science says is needed to avert disastrous climate change.

US President Donald Trump shocked the world in 2017 when he said the United States – history’s largest emitter – was withdrawing from the Paris deal. It is due to leave on November 4, just after the country’s presidential election.

The pandemic has further dented hopes that a diplomatic whirlwind could sweep foot-dragging nations into announcing bold climate action plans, as major summits were postponed and nations focused inwards.

Guterres said there was currently no clear sign that a United States government recovery policy would align with Paris goals, but he said he was hopeful that states, businesses and individuals “will compensate for the lack of political commitment that exists at the present moment”.

He said much now rests on the actions of the six biggest emitters – China, the US, Europe, Russia, India and Japan – ahead of the United Nations General Assembly, which will be held virtually this month.

“We have never been as fragile as we are, we never needed as much humility, unity and solidarity as now,” he added in a series of interviews with AFP and other members of Covering Climate Now, a global collaboration of news outlets committed to increased climate coverage. Guterres blasted “irrational demonstrations of xenophobia” and the rise of nationalism.

Climate change warnings are no longer predictions of a distant future.

Earth’s average surface temperature has gone up by one degree Celsius since the 19th century, enough to increase the intensity of droughts, heat waves and tropical cyclones.
Burning fossil fuels has been by far the main driver of rising temperatures, with concentrations of CO2 in the atmosphere now at their highest levels in around three million years.

The last five years were the five hottest on record, while ice sheets are melting at a rate that tracks scientists’ worst case scenarios, prefiguring devastating sea level rises.

“The expectations that we have in relation to the next five years about storms, about drought and about other dramatic impacts in the living conditions of many people around the world are absolutely terrible,” Guterres said, ahead of a multi-agency climate report on Wednesday.

The United Nations says it is still possible to reach a safer goal of a 1.5C cap in temperature rise, but to get there global emissions must fall 7.6 percent annually this decade.

While the shutdowns implemented during the pandemic could reduce global emissions by up to eight percent in 2020, scientists have warned that without systemic change in how the world powers and feeds itself, the drop would be essentially meaningless.

There are concerns that massive COVID-19 stimulus packages being devised by governments could fall back on bad habits and provide a crutch to polluting industries.
Guterres has used recent messages to Japan, India and China to speak out against their continued reliance on coal.

China – the world’s biggest polluter – has invested heavily in renewable energy, but it has also reportedly stepped up coal production.

But the UN head said he was hopeful the EU would make good on its green commitments after it announced its 750-billion-euro ($885 billion) stimulus plan that aims in part to reach carbon neutrality targets.

The pandemic had demonstrated society’s capacity to adapt to transformation, he said.

I don’t want to go back to a world where biodiversity is being put into question, to a world where fossil fuels receive more subsidies than renewables, or to a world in which we see inequalities making societies with less and less cohesion and creating instability, creating anger, creating frustration.

I think we need to have a different world, a different normal and we have an opportunity to do so.”

(These comments were made during an interview with António Guterres by Covering Climate Now partners on 4 September, 2020. Read the full transcript.)

“This terrible challenge [of COVID] that has caused so much suffering … is an opportunity. We need to invest massively in rebuilding.  We can either rebuild as it was—which is a huge mistake because of the fragilities of the world, facing pandemics, climate change, lawlessness in cyberspace, etc.—or we can rebuild a more inclusive and more sustainable economy and society. That is why we’ve been recommending to have massive investments in green technologies in green industries in green energy.” (NBC)

“Today to invest in green energy creates three times more jobs than to invest in fossil fuel energy. So any new investments must be made in green technologies because they create more jobs…. [Meanwhile], coal production and coal power plants are decreasing their role in the economy. So we [also] need to have measures to address the … problems of those whose jobs are put into danger by climate action.” (NBC)

“Many countries unfortunately are still doing bailouts without conditions—for instance, to fossil fuel-based industries. What we say is that when you bail out a company, there should be a number of conditions, and one of these conditions is that the company should have a transition plan to reach carbon neutrality by 2050.” (NBC)

“Do not use taxpayer money to subsidise fossil fuels. Use taxpayers’ money for other objectives. I don’t like to see my money as a taxpayer, in my own country, being used to melt the water of glaciers, or to increase the sea level, or to accelerate the number and the intensity of hurricanes in the Caribbean.” (NBC)

“It’s time to wake up. It’s time to understand that we can no longer lose more time doing not enough. Let’s not forget that if things will go on as they are, we will come to the end of the century with three to five degrees of increase of temperature in relation to pre-industrial levels. And that would be absolutely catastrophic.” (AFP)

“The good news is that we have shown with COVID-19 that we can adapt very quickly. We are living today in a completely different way from what we were one year ago, I mean, my life is not comparable. What I do and what I did is totally different, which means I can adapt very quickly. So, if I show that capacity to adapt because of COVID, there is a very strong reason for us to show the same capacity to adapt, because of the climate change threat, that is a very real one that we cannot, we cannot neglect.”  (AFP)

“We already have 120 countries committed to carbon neutrality in 2050, but they only represent 25% of the [global] emissions. Now it’s with the big emitters that we need to act. And that means the United States, that means Europe, that means China, that means Russia, that means Japan, that means India….  [They must] stop building coal power plants and financing the building of coal power plants by other countries, stop subsidies to fossil fuels, and have massive programmes of investments in renewables and other aspects of the green economy.” (AFP)

“I think we should be heading to get back to a new normal…I want to go back to the normal relations with my family. But I don’t want to go back to a world where biodiversity is being put into question, to a world where fossil fuels receive more subsidies than renewables, or to a world in which we see inequalities making societies with less and less cohesion and creating instability, creating anger, creating frustration. I think we need to have a different world, a different normal, and we have an opportunity to do so.” (AFP)

This article and the quotes are republished as part of the Covering Climate Now initiative, an unprecedented global media collaboration launched last year to put the spotlight on the climate crisis, of which Croakey Health Media is a member. It is co-founded by The Nation and the Columbia Journalism Review (CJR), in partnership with The Guardian.

PrevPreviousExploring the challenges for palliative care during pandemic times
NextUnmasking privilege, stress, anxiety and cruelty in the pandemicNext