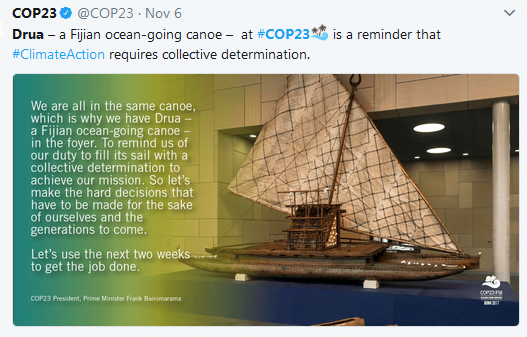 #COP23, the  23rd annual “conference of the parties” (COP) under the UN Framework Convention on Climate Change (UNFCCC), has opened in Germany this week with Fiji at the helm  – the first so-called Small Island Developing State to ever take up the presidency.

In the post below Liz Bashford from Doctors for the Environment Australia provides an early glimpse at the aims, urgency and barriers to progress of the two-week conference, where health will rightly be a key focus.

In a message to Fijians last week before heading to Bonn, Fiji’s Prime Minister Frank Bainimarama said he and his team were embarking on “the most important mission we have ever undertaken as a nation for the entire world”.

He promised to be impartial in the role, to act in the collective interests of all nations, but said he will certainly bring his own perspective to the negotiations:

“And it is that of a Fijian, a Pacific Islander, who comes from a region of the world that is bearing the brunt of climate change. Whether it is the rising seas, extreme weather events or changes to agriculture, that threaten our way of life and in some cases, our very existence.”

Croakey readers may be interested to read this #COP23 backgrounder from the Guardian.

Also of interest is this new report from The Lancet: what it says provides the first global stocktake on the various ways that climate change is already affecting the health of people across the planet today. It tracks 40 indicators across five areas, arriving at three key conclusions:

The timing of COP23 could not be better.

It is very likely that 2017 will be one of the three hottest years on record, and has been marked by catastrophic hurricanes and flooding, lethal heat waves, unprecedented Californian wildfires and debilitating drought across the world.

Fiji, which is on the frontline of sea level rise and extreme weather events as a result of climate change, is the hosting country, and there has been a strong turnout from our Pacific neighbours.

Across the Pacific Islands, home to 10 million people, up to 1.7 million could be displaced because of climate change by 2050. In 2012, Vunidogoloa, Fiji, became the first village to begin relocating to higher ground due to sea-level rise.

According to a World Bank report, climate threats to Fiji include:

The ultimate goal of COP23 is to further implement the Paris Agreement to hold the global average temperature rise from pre-industrial time to well below 2 degrees Celsius and as close as possible to 1.5 degrees.

The summit will looking to strengthening the global response to health challenges, and to discuss the unprecedented opportunities for public health in mitigation strategies for climate change.

Awareness of climate change and its health impacts, and demand for action, is accelerating around the globe. There will be calls for further reductions in carbon emissions and to increase opportunities in renewable energy and sustainability.

The leaders of close to 20 countries are attending.

Last week, the UN reported that about two-thirds of the 25 major emitting countries have so far failed to achieve emissions targets set in Nationally Determined Contributions (NDCs).

The UN called Australia out on its progress saying:

“The  Emissions  Reduction  Fund,  which the Government of Australia considers to be a key policy measure to reduce emissions, alongside other measures such as the National Energy Productivity Plan and targets for the reduction of hydrofluorocarbons (85 percent by 2036), does not set Australia on a path to meeting its targets”

It is no surprise that Australia’s greenhouse gas emissions are rising not falling, considering Australia’s dithering energy policies and championing of new coal mines and gas fields.

Laggards other than Australia include Argentina, Canada, Chile, Democratic Republic of the Congo, Ethiopia, the EU, Indonesia, Kazakhstan, Morocco, Republic of Korea, Saudi Arabia, South Africa, Thailand, the Philippines and the United States.

On the other hand, Brazil, Colombia, India, Japan, Mexico, the Russian Federation, Turkey, and the Ukraine are on track. China is likely to meet its emissions reduction targets a decade ahead of schedule.

Global emissions from energy and industry have flat-lined, but they only account for 75% of emissions. Total greenhouse gas emissions have continued to rise, mainly due to land clearing and increased emissions from countries with ineffective emissions reductions policies.

COP: A driver of climate action

COP23 is the 23rd Conference of Parties to the UN Convention on Climate Change. The first meeting was held in 1994, to establish obligations for countries to reduce their greenhouse gas emissions in a global effort to tackle climate change. Since then it’s had a chequered history, from the ‘failure’ of the Copenhagen meeting of 2009, to the landmark Paris Agreement which came out of COP21 two years ago.

195 nations of the world have signed the Paris Agreement, and 169 have become party to it. Paris signaled a global acknowledgement that the time for gamesmanship is over – carbon emission reduction is critical.

In Tuesday’s news from #COP23, Syria signed up to the Paris Agreement, leaving the US as the sole outlier, due to withdraw from the Agreement in 2020. The US team at COP23 is perversely set to promote coal, natural gas and nuclear energy to meet emission targets.

The US withdrawal will see a strong focus on climate finance contributions from other nations.

Fiji’s installation of an ocean-going “drua” canoe in the entrance of the conference packs a strong symbolic gesture of hope.

Prime Minister Frank Bainimarama, said the drua was “to remind everyone of the need to fill its sail with collective determination to make COP23 a success and confront the biggest challenge humanity has faced”.

Liz Bashford is an anaesthetist and a member of Doctors for the Environment Australia.

Momentum for Change on Vimeo

Momentum for Change on SoundCloud

PrevPreviousAMA calls for independent verification of living conditions, healthcare for Manus refugees
NextSharing the learnings of a formidable agent for changeNext