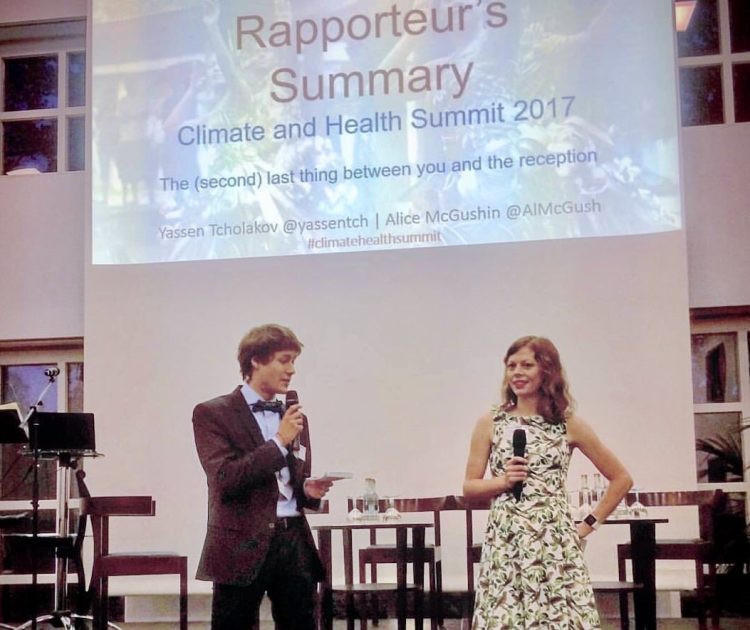 COP23: Working on a “rulebook” for the Paris Agreement

A thought provoking article in the Conversation argues that there is nothing to be gained by ‘giving up’ on the future of low-lying Pacific Islands threatened by climate change, highlighting that the people who live in these places are focused on surviving, and staying put.

The UN Framework Convention on Climate Change 23rd Conference of Parties (COP23), currently taking place in Bonn, Germany, is under Fijian presidency – a fact which must surely galvanise the collective will, knowledge and creativity of the participants.

If yesterday’s ‘postcard’ about COP23 raised your curiosity, you will enjoy the post below, in which junior doctor and member of Doctors for the Environment Australia, Alice McGushin, fleshes out some more of the packed programme of events so far.

However, whilst plans for the Paris Agreement are taking place, there is also a growing call for increased action now in the pre-2020 period. With a Fijian Presidency, a strong focus at COP23 has been on Small Island Developing States and the Least Developed Countries, who are already feeling the impacts of climate change.

The structure of the UNFCCC and its COP is complex and there are concurrent sessions taking place for the Ad-Hoc working group on the Paris Agreement (APA), the Subsidiary Bodies for Scientific and Technical Advice (SBSTA) and Implementation (SBI). Climate tracker has put together a very handy infographic explaining these different sessions and their agenda items at COP23.

The Climate Action Network continues to provide daily in-depth updates on the progress of the negotiations in its ECO newsletter. By the end of this week we should have draft texts, ready to complete the “rulebook” for the Paris Agreement at COP24 in Warsaw.

While discussions around health seemingly remain scant in the negotiations, health and climate change have been present in force outside the formal processes.

The annual Climate and Health Summit took place on the 11th of November. This brought together people from around the world who are passionate about health and climate change to hear about initiatives to address the human impacts on climate change and to share experiences and plan together on how to take action forward.

Governor Schwarzenegger called on the WHO take lessons from its work on tobacco and place health warning labels on fossil fuels.

Climate change is one of Dr Tedros’ key priorities and he has appointed Dr Joy St John as the first Assistant Director-General for Climate Change and Other Determinants of Health.

Dr Tedros also launched the WHO Climate Change and Health in Small Island Developing States Initiative, stating that climate change is not a political argument in Fiji and other island nations – it is an everyday reality.

In the introductory event to this initiative the Ministers for Health of Fiji, the Cook Islands and Barbados, gave gut-wrenching personal stories from the frontlines of the health impacts of climate change.

The responsibility of the health sector to lead by example has also been highlighted by the Health Care Call to Action endorsed by institutions representing more than 10,000 hospitals.

The three key messages, impact, delay, opportunity, of the 2017 Report of the Lancet Countdown, released the week prior to COP23, have been referenced many times. Human symptoms of climate change are unequivocal and are fundamentally altering the health profiles of countries worldwide.

Since the Rio Earth Summit 25 years ago, there has not been nearly enough action to mitigate climate change and this has jeopardised human health and livelihoods. However, there has been an accelerated response in the past five years and this presents unprecedented opportunities for public health.

Climate change is gaining increasing recognition as the key health issue. We must continue to build on the momentum to ensure the best possible health for current and future generations.

*Alice McGushin has been attending COP23 in Bonn. She is a junior doctor from Tasmania and a member of Doctors for the Environment Australia. She is currently in the UK studying an MSc Public Health at London School of Hygiene and Tropical Medicine.