Could Australian doctors be doing more to tackle health inequities?

At the Public Health Association conference in Adelaide this week, Professor Fran Baum from Flinders University presented this broad overview of the international evidence on the relationships between sustainability and equity in health.

Her presentation showed that:

• health inequalities are worsening internationally. The life expectancy for men in low income countries fell from 62 years in 1997 to 56 years in 2006. In rural Cambodia, only 8 per cent of the population had adequate access to water and sanitation in 2004.

• health is not only about wealth but is also about how it is distributed. More equal societies tend to be healthier. For example, children’s wellbeing is better and levels of trust are higher in more equal rich countries, while the more unequal rich countries have longer working hours and a higher prevalence of mental illness.

This slide comparing Costa Rica and US is a corker; it shows that better health and happiness is not all about more money, or even more spending on health services. 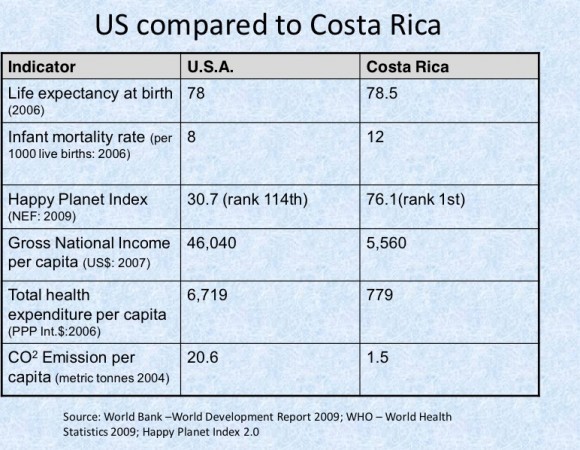 The evidence that Baum presented was compelling, but the question lingering afterwards was: what can be done?

Public health consultant Rebecca Gordon has been investigating whether Australia’s medical powerbrokers have been doing enough to advance action on the social determinants of health and health equity.

In June this year, the Royal College of Physicians in England released a policy statement “How doctors can close the gap: Tackling the social determinants of health”.

The RCP points out that many doctors have not paid enough attention to health promotion, preventing ill health and reducing health inequalities, and unequal access to care. As some of the most trusted professionals in society, doctors at all levels can join forces to advocate for health equality. Doctors can advocate on a personal, community or national level.

The statement includes recommendations and suggestions for actions across the health sector.

These range from considering the impact of day-to-day practice on health inequalities to advocating policies and programmes that could benefit the physical and mental health of socially disadvantaged groups and also result in reductions in greenhouse gas emissions.

In Australia, colleges and professional organisations have made government submissions and public statements on issues such as health reform, Indigenous health, mental health, refugee health and climate change. Individual doctors have spoken up on the same issues.

Mental health professionals have been active in advocating for change in mental health care and to address factors which influence the development and course of mental disorders including social inclusion, early intervention and community versus hospital based care.

It’s clear that these advocates are on the same message but efforts have been hampered by a lack of unified action.

This month Andrew Pesce has been in the media discussing the AMA Indigenous Report Card and has called on government to use the health reform process to focus more on social disadvantage.

But taking the RCP approach as opposed to lobbying government, how can the health profession as a whole and as individuals take effective action on influencing the social determinants of health? How can doctors tackle social inequality both in day-to-day practice and as a profession?

Some professional organisations have policies on social determinants or related issues such as alcohol. But these lean heavily towards the traditional focus of the Colleges and the AMA on influencing government. While taking a position is important, these policies lack concrete recommendations for action by their individual members.

The RCP proposes a shift towards unified action supporting a shared goal at all levels, personal, community and national. They also emphasise working with other sectors.

• The Royal Australasian College of Physicians 2005 policy statement “Inequity and Health.  A call to action.  Addressing Health and Socioeconomic Inequality in Australia”.

• The Royal Australian College of General Practitioners  has policies related to enhancing equity and access, including statements on Aboriginal health, access to general practice services, and healthcare for refugees and asylum seekers

• The AMA position statement on Social Determinants and Prevention of Health Inequities (2007).

The Royal Australian and New Zeland College of Psychiatrists whose members work in a key area of social disadvantage has no specific policy on social determinants but do have position statements on asylum seekers.

Doctors, highly trusted and respected by their patients and society, are in the unique position of being able to influence the health of individuals directly while advocating for broader social change.

The colleges and professional organisations representing doctors can advance this process by providing an evidence-based action plan to promote health and prevent illness emphasising actions that address social determinants of health.

Clearly there is a lot more that could be done, but at least the RCP has made a start.

• Rebecca Gordon is a consultant with RaggAhmed

“Everybody in public health should read that book,” she said.

Just passing on the recommendation…

PrevPreviousIs it time for an investigation into the pathology industry?
NextA call to health policy researchers: have you examples of government gags?Next