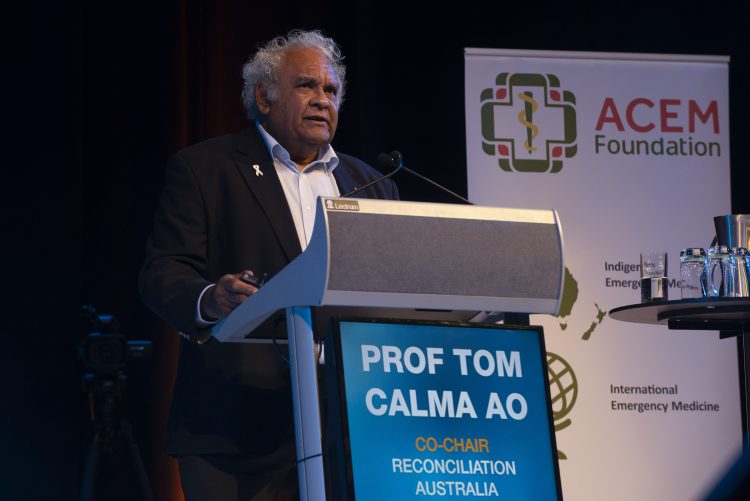 As Australian governments prepare to sign off on a new set of Closing the Gap targets, a senior Aboriginal health advocate, Professor Tom Calma AO, has called for meaningful re-engagement with Indigenous communities on the process.

Calma, a Kungarakan and Iwaidja Elder and former social justice and race discrimination commissioner, added his voice to calls for the Council of Australian Governments (COAG) to hit pause on plans to settle a new round of Closing the Gap targets at its next meeting on December 12.

The National Aboriginal Community Controlled Health Organisation (NACCHO) and other peak Aboriginal health bodies have called for an urgent meeting with COAG representatives to determine a framework for reaching agreement on a refreshed Closing the Gap strategy. The Australian Healthcare and Hospitals Association is backing their calls on #RefreshtheCTGRefresh.

Speaking in Perth, where he delivered the Australasian College for Emergency Medicine’s annual Foundation Lecture on Monday night ahead of two major Indigenous suicide prevention conferences in the city (read our preview here), Calma said Aboriginal and Torres Strait Islander groups had again been locked out of Closing the Gap talks.

“We’ve invested a lot of time and effort as Aboriginal and Torres Strait Islander people in informing the Government about the sort of targets and priority areas that we see should happen,” said Calma in an interview with Croakey at #ACEM18.

“That’s gone into bureaucracy but feedback hasn’t come back us, yet there is going to be a COAG meeting on the 12th of December that is going to determine the future.

“So we don’t have a lot of confidence that ministers haven’t interfered with what we see as the priority areas, (they haven’t seen fit to) negotiate with us, talk with us.”

Calma said addressing disability and the over-representation of Aboriginal and Torres Strait Islander people in the justice system were two key areas that needed to be addressed in a refresh of the Close the Gap targets.

He was scathing about a revolving door of Prime Ministers, frontbenchers and thousands of bureaucrats that had seen a stop-start in funding and consistent policy approaches in Aboriginal affairs, with the appointment of Tony Abbott as Indigenous envoy the latest “ludicrous” development – “another waste of money that’s going to be debited against the Aboriginal expenditure portfolio”.

“All he needs to do is look at the numerous reports that have been done on Aboriginal and Torres Strait Islander education, and issues to address attendance and so forth: those solutions have been offered up for years by the experts, people who are invested in this area,” he said.

“This is where Aboriginal and Torres Strait Islander people get really pissed off, because we are continually investing, we keep on getting asked about what do we need to do, how can we help you, and we invest in this and yet nothing gets heard.”

Calma said this was the case when the original Closing the Gap targets were “unilaterally determined” by governments – one of the reasons, ten years down the track, that little progress had been made towards meeting them.

“While theoretically 10 years have passed, we’ve had so many changes to government policies that it’s meant that there’s been no consistency and level of engagement with Aboriginal and Torres Strait Islander people,” he said.

“The only consistency’s been in Aboriginal and Torres Strait Islander people, who are still there and still working on the issues that impact us.”

Address and interrogate your bias

In an engaging and wide-ranging address at the ACEM annual scientific meeting, Calma urged emergency doctors to examine and address the unconscious biases that underpinned their clinical decision-making.

He touched on the high-profile cases of Ms Dhu, Dr G Yunupingu, Naomi Williams and Mr Ward, each of whom died due to institutional failings within the justice and health systems.

Calma also spoke about the Northern Territory Intervention and the role of mass media in perpetuating dangerous narratives and stereotypes about Aboriginal and Torres Strait Islander people that contributed to poor health outcomes.

Calma said Indigenous patients had some of the highest rates of discharge against medical advice due to their experiences within and beliefs about the health system, including that you were safer out of hospital than in it, and shared some sobering statistics from the Healing Foundation on intergenerational impacts of trauma.

Calma also echoed recent sentiments from VACCHO acting CEO Trevor Pearce on the impacts of racism, citing work by the Australian Indigenous Doctors’ Association: “It’s a fact, racism is a determinant of health and it’s a major determinant that we have to look at for both mental and physical health.”

Though reductions in smoking had been one of the big success stories in Aboriginal health over the past decade, Calma said general population approaches didn’t tend to work within Indigenous communities, where people were younger (65 percent younger than 30 and 46 percent younger than 20) and died earlier (30 percent dead by 65 vs 9 percent in the broader population).

Human rights-based approaches, incorporating social and cultural determinants of health and led by and for Aboriginal and Torres Strait Islander people, held the answers, Calma said.

“Governments can’t make us healthy, we have to take control of that ourselves,” he said. “It’s all about empowerment and giving direction, support and confidence to people to address their health issues.”

Rather than being passengers in democracy, he urged doctors to participate in movements for change, including a mature reckoning with the past and its ongoing legacies. 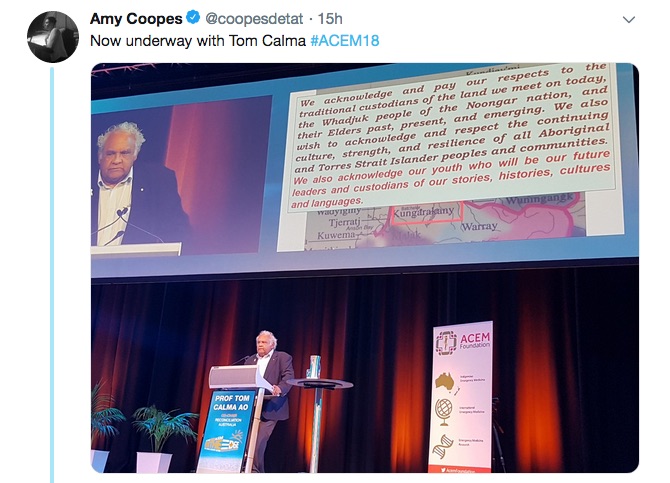 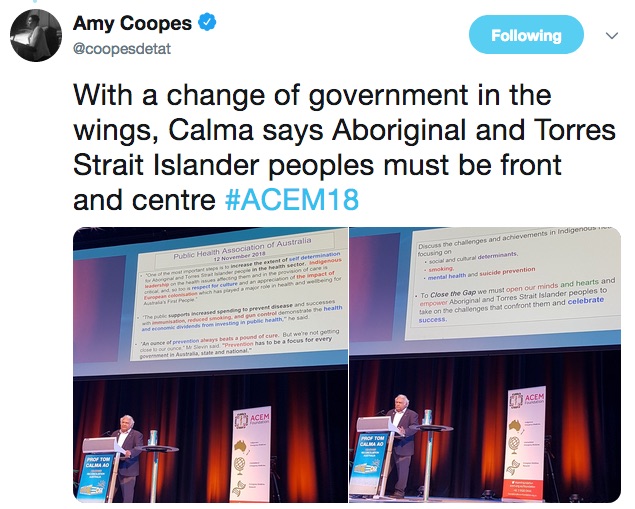 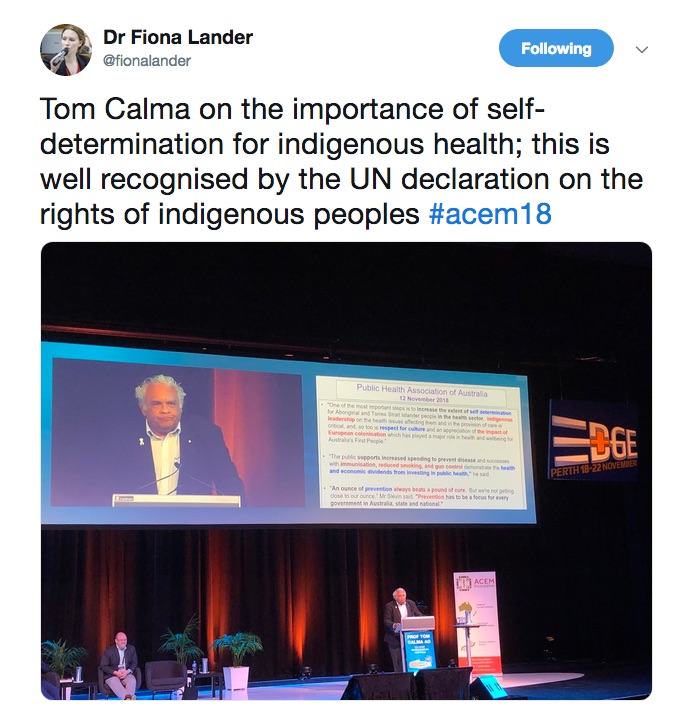 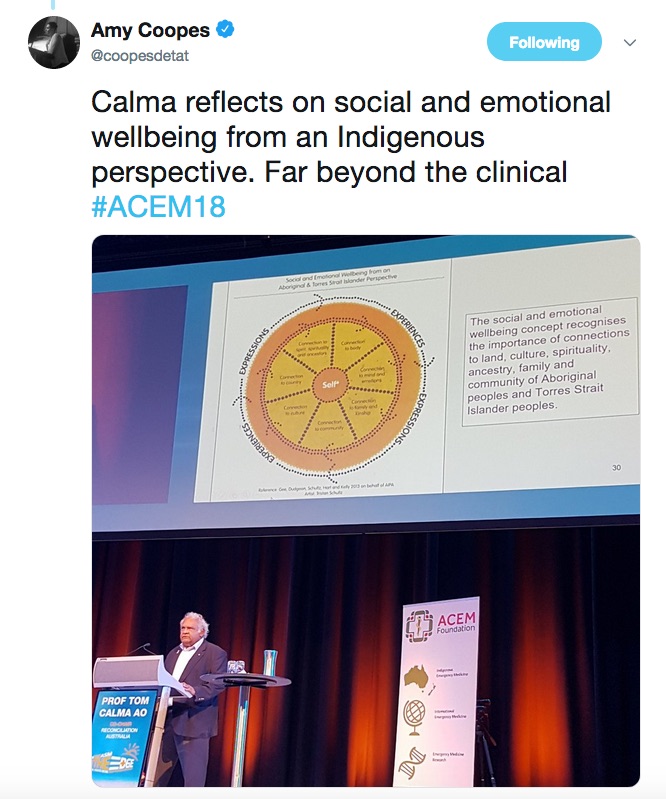 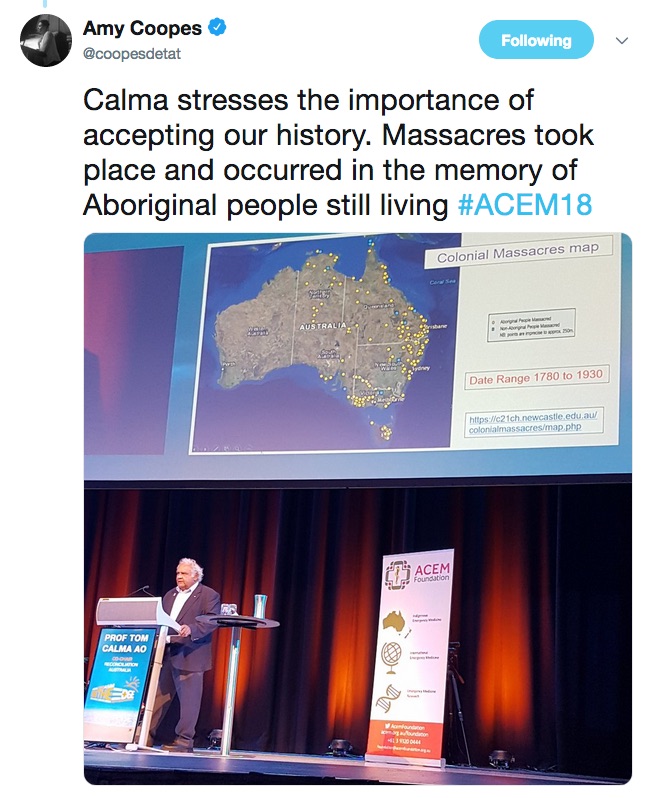 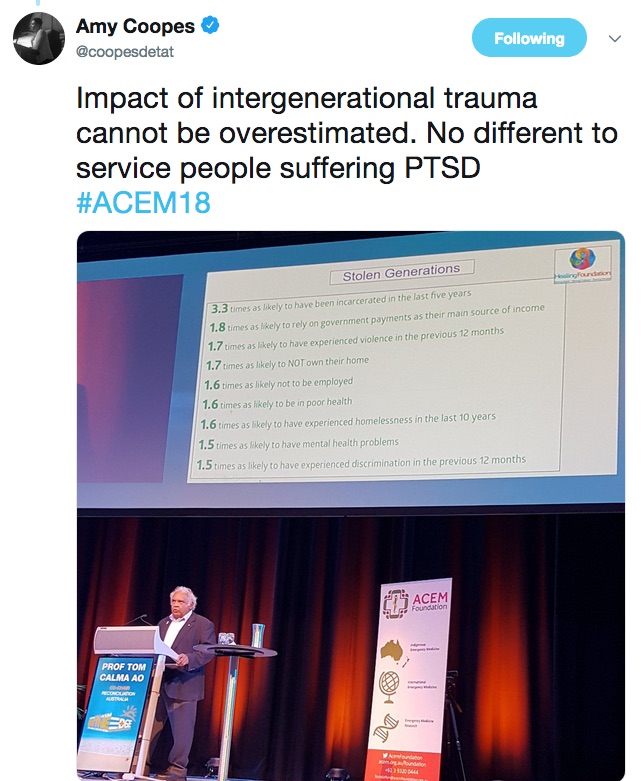 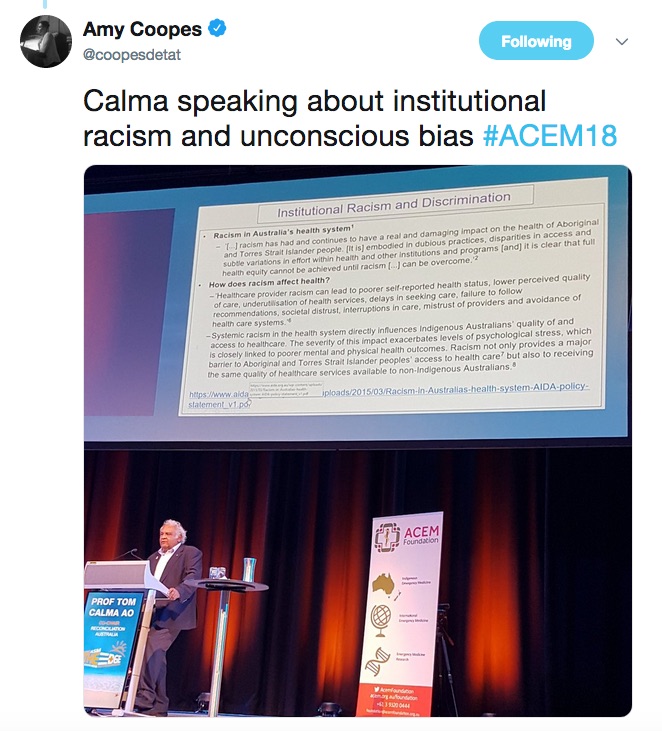 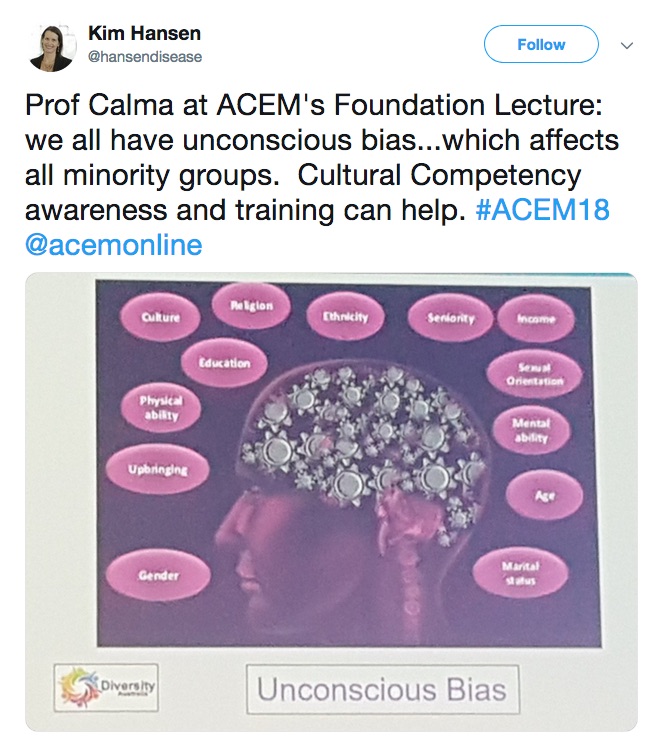 As global Indigenous suicide prevention advocates descend on Perth for their second-ever meeting, Calma, a patron of the movement, shared some sobering statistics with ACEM delegates.

No Indigenous family or kinship group in Australia was untouched by suicide, he said, with an estimated 95 percent of the population affected in some way by someone who taken their own life.

Three in every four child suicides between 2007-11 were Aboriginal children, with youth rates five times that of the non-Indigenous population. One quarter of Indigenous people aged 15 years and over had been diagnosed with a mental health condition, and 23 percent reported problems accessing health services.

Governments poured billions into black spot areas on our roads when motor vehicle accidents accounted for less than half the number of deaths attributable to suicide, where mere thousands were spent on prevention.

“To win gold medals we’ll invest big time; to save people’s lives we’ll do a token effort,” he said.

PrevPreviousHow Australia’s NRA-inspired gun lobby is trying to chip away at gun control laws, state by state
Next“We are not in the aviation business, we are in the mobility business”Next