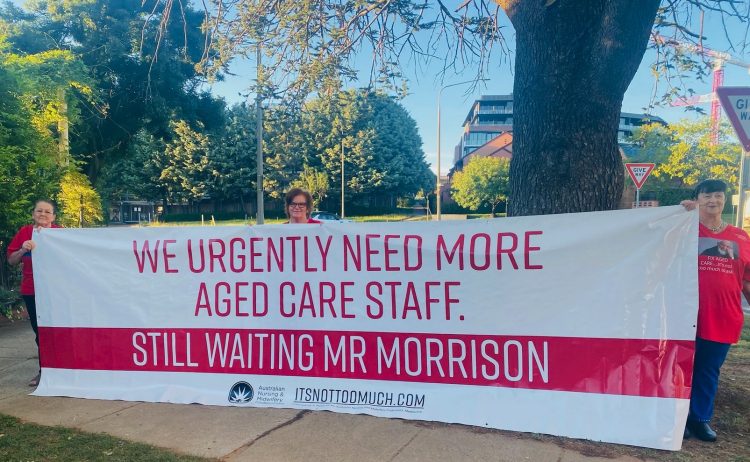 Introduction by Croakey: In Canberra yesterday, Greens leader Adam Bandt told a rally of aged care workers and nurses that his partner is retraining as a nurse and had recently completed a placement in aged care.

“The stories that she told me are hair raising,” he told the gathering and its Facebook audience.

Bandt described a system in crisis where people aren’t getting cleaned, where staff bring their own personal protective equipment (PPE), and where there is uncertainty about which residents have been vaccinated.

Bandt was not the only speaker to critique the Prime Minister’s recent photo opportunity in a hairdressing salon at a time when many aged care residents are missing out on basic care and hygiene due to widespread workforce shortages and COVID outbreaks.

ANMF federal secretary Annie Butler welcomed this week’s announcement that 1,700 Australian Defence Force members will support aged care, but said hundreds of residents had died since the sector began asking for such support four weeks ago. (Read more on the rally from the Australian Nursing and Midwifery Journal, and also see tweets below.)

Meanwhile, Professor Jill White, a senior nursing academic who is now retired, writes below that the Federal Government must be held to account for the systems errors in aged care, and that a project of remembrance should honour those residents who have died prematurely.

Her article was first published at John Menadue’s site, Pearls and Irritations, and is republished with permission.

The death rate from Omicron in the elderly is staggering. And these are not “good deaths” whereby these elderly are surrounded by their loved ones.

How a society cares for and protects its most vulnerable – for example its frail aged, those experiencing violent relationships, prisoners and refugees – speaks to the heart of its government, both those elected and the policymakers of the public service who advise those elected.

As a nurse, mother and voter, I can no longer contain my rage at the lack of public acknowledgement of the personhoods of those who have died prematurely as a result of mismanagement of a known disease. These are iatrogenic deaths, death caused by healthcare treatment or the lack thereof.

When someone is injured or dies unexpectedly in a health facility and the care or the lack of care may have contributed to this incident, there is an immediate investigation and a search for any system gaps that may have led to the error of care.

This search, or serious adverse event management, seeks to ensure that, if there was a gap in the system of care, that it is remedied and strategies are put in place to avoid such an incident happening again. This is fundamental to any established health and safety program.

A root cause analysis (RCA) or similar investigative process is undertaken by a multidisciplinary team of investigators. The purpose of the RCA is to make a judgment about the likelihood of there being a systemic problem, such that this incident may happen again elsewhere.

Were this to have happened in the aged-care sector, it would have been readily seen that there were significant systems errors that were being repeated, over and over again at many of the facilities and that they all had the same root cause.

The root cause is governmental lack of planning and reliable logistics. The multidisciplinary team of investigators would have seen the following adverse events:

In normal circumstances, any one of these breaches would be sufficient to raise questions as to the suitability of the organisation under investigation to hold a licence, but in this analysis of the system the fault lies above the level of an individual organisation and sits squarely with the Federal Government.

The death rate from Omicron in the elderly is staggering. People over 70 accounted for 84 percent of 1,103 deaths between December 15 and the end of January, while those aged 90-plus made up 24 percent.

And let us not imagine that these are “good deaths” whereby these infected elderly are dying peacefully surrounded by their loved ones. The people who have died of COVID in aged-care facilities are dying untimely deaths, often alone, estranged from family and in great discomfort. This is no peaceful, comfortable, dignified dying for those who, according to Health Minister Greg Hunt were dismissed as “palliative”.

Nurses nationally have borne witness to the problems in aged care for a decade and have been loud in the calls for much to be done, including the holding of the recent Royal Commission.

Key to their submissions was the issue of inadequate staffing – in numbers, experience, and qualifications, expressly the need for registered nurses in every facility 24 hours a day. (This was not supported by the Government’s response to the commission.) Registered nurses in facilities are able to accurately access patients, plan their care and critically pick up early signs of deterioration and intervene, often preventing the need for transfer to already struggling emergency departments.

On 2 February, the peak national nursing organisations called on the Government to begin to undertake the following urgent actions, as a prelude to more sustained system restructuring:

A two-week booster blitz in nursing homes across the country, using the offers of state services, the deployment of army health personnel and the use of nurse practitioners and other nurse vaccinators to achieve maximum booster coverage, including immediately removing MBS [Medicare Benefits Schedule] restrictions that disallow privately practising nurse practitioners from using their item numbers to provide Covid-19 vaccinations.

Provide funding for supplemental staff from agency and community care that is additional to current funding.

In the longer term, provide appropriate staffing ratios and funding in accordance with the royal commission findings.”

To this list, apart, of course, from ongoing, sustainable staffing strategies and payment, I would add also that we must find an appropriate way of honouring and naming the currently faceless people who have died prematurely while in our care in aged-care facilities.

This may be a memorial wall holding the names of those who have died, or a park named in their honour, as has been established in the United Kingdom. They must not be forgotten, and some reparation made, through this honouring, to the loved ones left behind.

These untimely deaths must not simply be a number recited daily by news organisations but must be accounted for, responsibility taken, by those whose job it is. In this case it is the job of the Federal Government. As indicated above such incidents would provoke the revocation of licences if it were an individual organisation.

As those ultimately responsible, perhaps it is time the Government lost its licence to have anything to do with management and oversight of care of our most vulnerable.

Nurses and aged-care providers across the country are putting the government on notice – there are a quarter of a million aged care workers and over 450,000 registered nurses and we vote.

Jill White is a Professor Emerita of the Susan Wakel School of Nursing and Midwifery at the University of Sydney and the Faculty of Health University of Technology, Sydney (UTS) Australia. 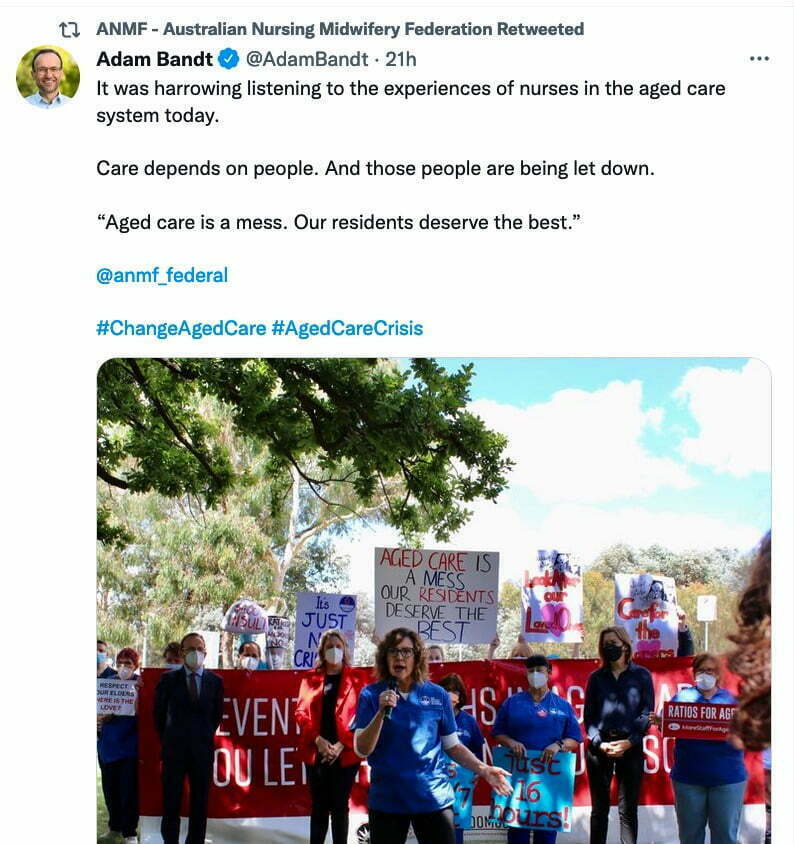 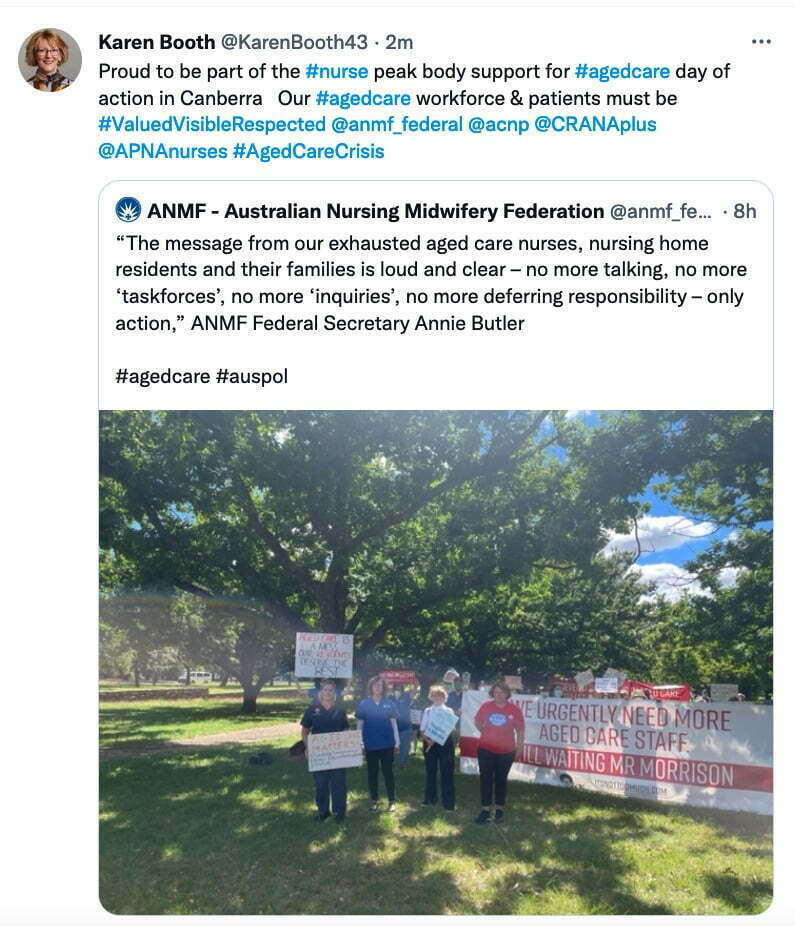 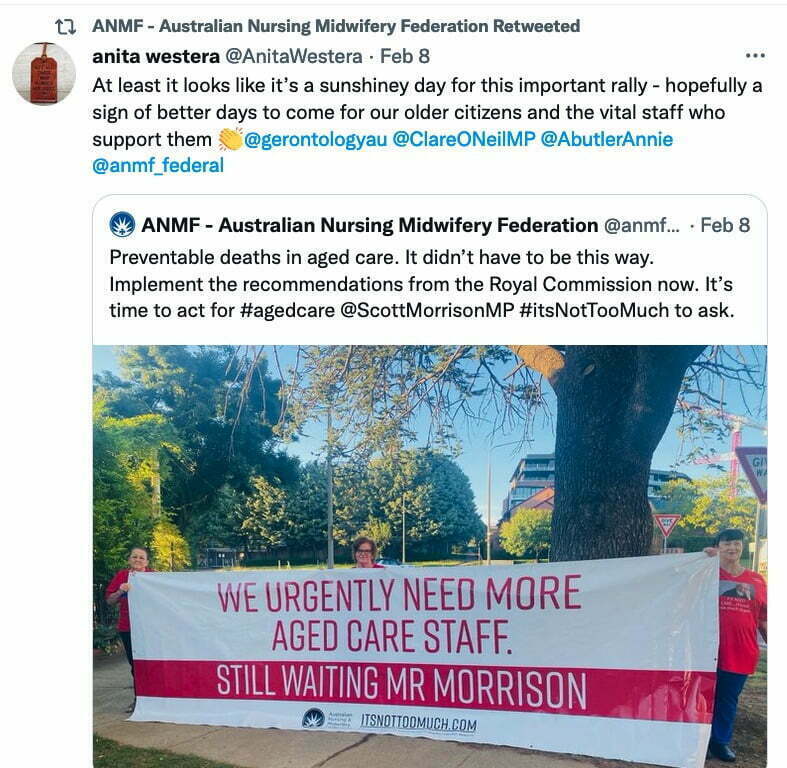 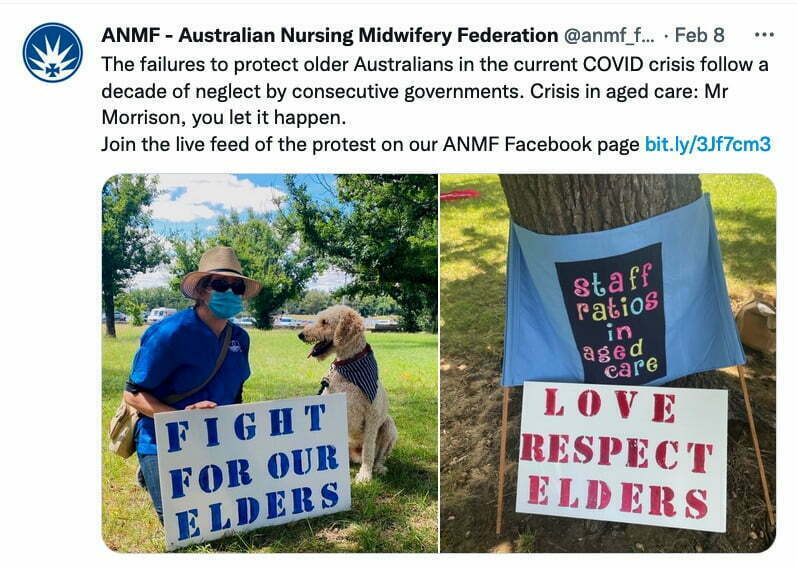 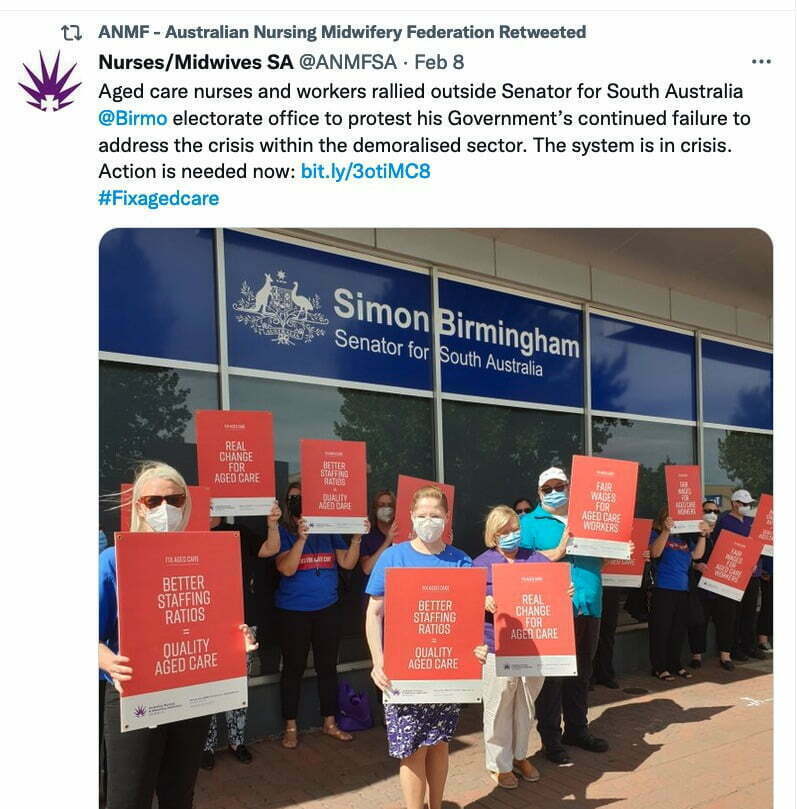 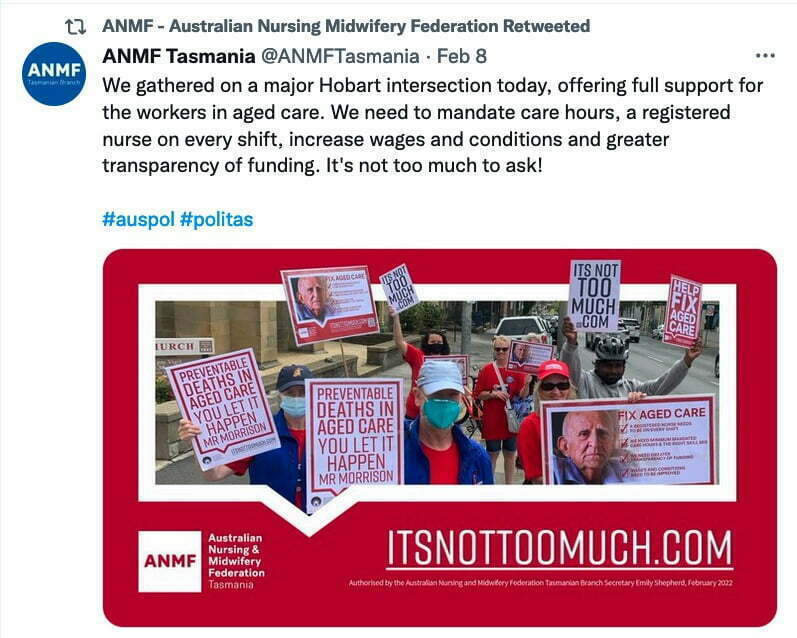 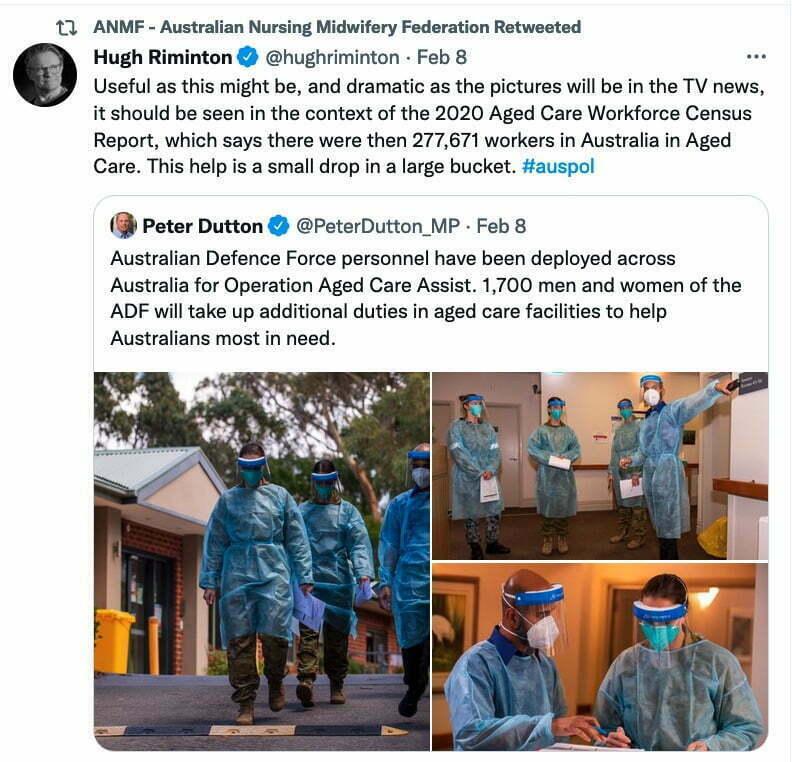 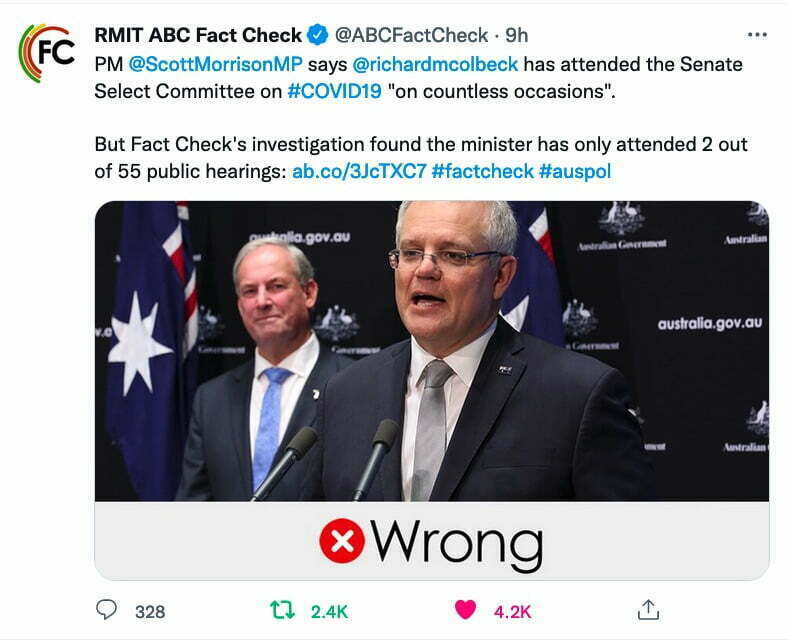 Vaccination, workforce and collaboration the key to reducing COVID-19 deaths in aged care

PrevPreviousCOVID-19 wrap: a global overview, inequities in Australia, and the return to school
NextVictoria unveils plans for health and human services to adapt to climate changeNext