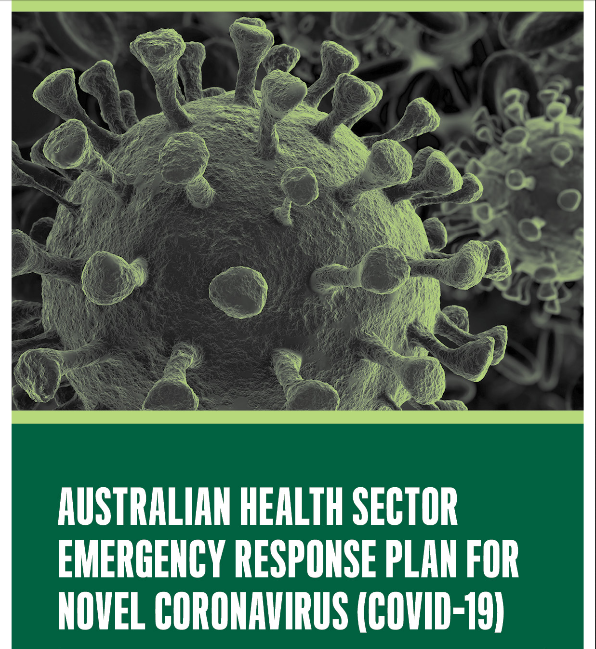 Putting the plan and its implementation under scrutiny

COVID-19 and lessons for our health system

Introduction by Croakey: The Chief Medical Officer Professor Brendan Murphy is due to appear tomorrow (23 April) before a Senate committee inquiring into the Australian Government’s response to the COVID-19 pandemic.

The Acting Secretary for Health Caroline Edwards is also on the program for the inquiry’s first public hearing.

Croakey readers have until 28 May to lodge a submission. The committee, chaired by Labor Senator Katy Gallagher, is due to report on or before 30 June 2022.

Meanwhile, long-term health reform advocate Dr Tim Woodruff argues below that the pandemic has highlighted many opportunities for improving not only the health system, but also the community’s health.

Australia doesn’t have a health system. We have a maze of poorly connected health services which barely manage to work together to provide health care of extremely variable quality depending on many competing variables such as income, geography, ethnicity, culture, and type of illness.

In addition, politicians generally do not link health outcomes to other crucial factors in our lives, the social determinants of health, the conditions in which people are born, grow, live, work and age.

This pandemic brings these issues into sharp focus.

These separate funding roles lead to endless blaming battles as each player attempts to shift responsibility to the other.

‘Not my problem’ is the catchcry as patients suffer as a result of the inadequately funded and poorly co-ordinated care. The hospital/primary care divide continues to the detriment of patients as the federally funded GPs and the state run hospitals fail to work together. ‘Not my problem’ they both say, or, at best they work in such an inefficient way the patient is no better off. A classic example of this inefficiency is My Health Record used by only a few percent of doctors.

When a pandemic hits, ‘Not my problem’ is not an answer. When it was clear that a global response was needed, our public health teams very quickly became more co-ordinated in rolling out the advice and the public health response. But the response also depended on individual front-line workers: GPs, nurses, practice staff, community health workers, and hospital staff, to work together to put the response in place.

Despite PHNs being charged with integrating care, GPs were often making their first contact with their local PHN to get Personal Protective Equipment (PPE).
Some publicly subsidised private hospitals continued to use vital PPEs for elective surgery whilst others were threatening to close for financial reasons despite the real possibility their beds, staff, and equipment might be needed if infection numbers rocketed. Instead they won a $1.3 billion pay-check from taxpayers before it was clear they would even be needed.

Imagine if, instead of using public taxpayer funds to increase the capacity of private hospitals over the last 20 years, we had instead put that money into public hospitals. Sixty percent of elective surgery is now done privately. If most of that was being done in an enlarged public system, we would have a huge increase in bed and ICU capacity easily accessible without any need to pay more money to the private hospital industry.

Now is the time to consider an independent single funder for healthcare tasked with funding and integrating prevention, emergency services, primary healthcare including dental care, and hospital services.

Such an organisation must have a remit to fund services which can be demonstrated are effective and which are integrated with other services. As discussed previously, implementing this reform is a long-term project. It could start with controlling all new funding and gathering the data required to establish services based on need across the country and across the health service spectrum.

In addition we must address the social determinants of health, the importance of which has been so well exposed by this pandemic.

People need an income to survive. They need shelter, protection from violence, social support and ongoing education. Too often the political focus has been an indiscriminate obsession with jobs.

Now we see a realisation that jobs are only a part of the answer. If there are no jobs, an income is still required. If the job is unstable and insecure, or too demanding, support is required. If there is a job but children need looking after, childcare needs to be accessible.

How much easier would it have been if we had had a basic income guarantee (BIG) about which I have written previously?

No Centrelink queues (with or without physical distancing). No hours on the phone trying to contact Centrelink. No days or weeks waiting for the phone call from Centrelink. No demeaning experience of trying to interact with an organisation with such a focus on stopping rorting (whilst politicians receive slaps on the wrist for their financial rorts). Even with a BIG, huge changes would still have been required. It would however, have been much simpler, faster and less traumatic for all involved.

Whilst these various financial supports come from the conservative side with support from across the political spectrum, the pandemic has brought to the fore a realisation that a strong economy depends on having a healthy community.

Moving to a post pandemic world, one hopes it is more widely appreciated that the healthier the population, the stronger the economy will be.

It is reassuring that politicians have sought out and accepted scientific advice on how to address the current health crisis. Key lessons to be taken from this response are the importance of evidence and science, and the need for greater acceptance of the science of climate change, which has the capacity to wreak even more havoc to both our health and our economy over time than this pandemic.

Hopefully, we will not be going back to a world where welfare recipients are demonised, job seekers are punished, and vulnerable people with a poor education, a mental illness, a drug addiction, or any number of other life challenging conditions/situations are regarded as lazy useless sub-humans.

It is time to move to a progressive, kinder, caring society that sees every person as valuable, which maximises everyone’s very variable capacity to contribute to society, and which enables, rather than hinders, the integration of our most vulnerable brothers and sisters.

Jobs need to be secure, not just any job. Income needs to be adequate, not held low in an unsubstantiated belief that that gets people working again in a productive way. Income and wealth disparities need to be reduced.

We need to recognise the stark correlation between health and social problems and income. (The slide below comes from this presentation by the Equality Trust). 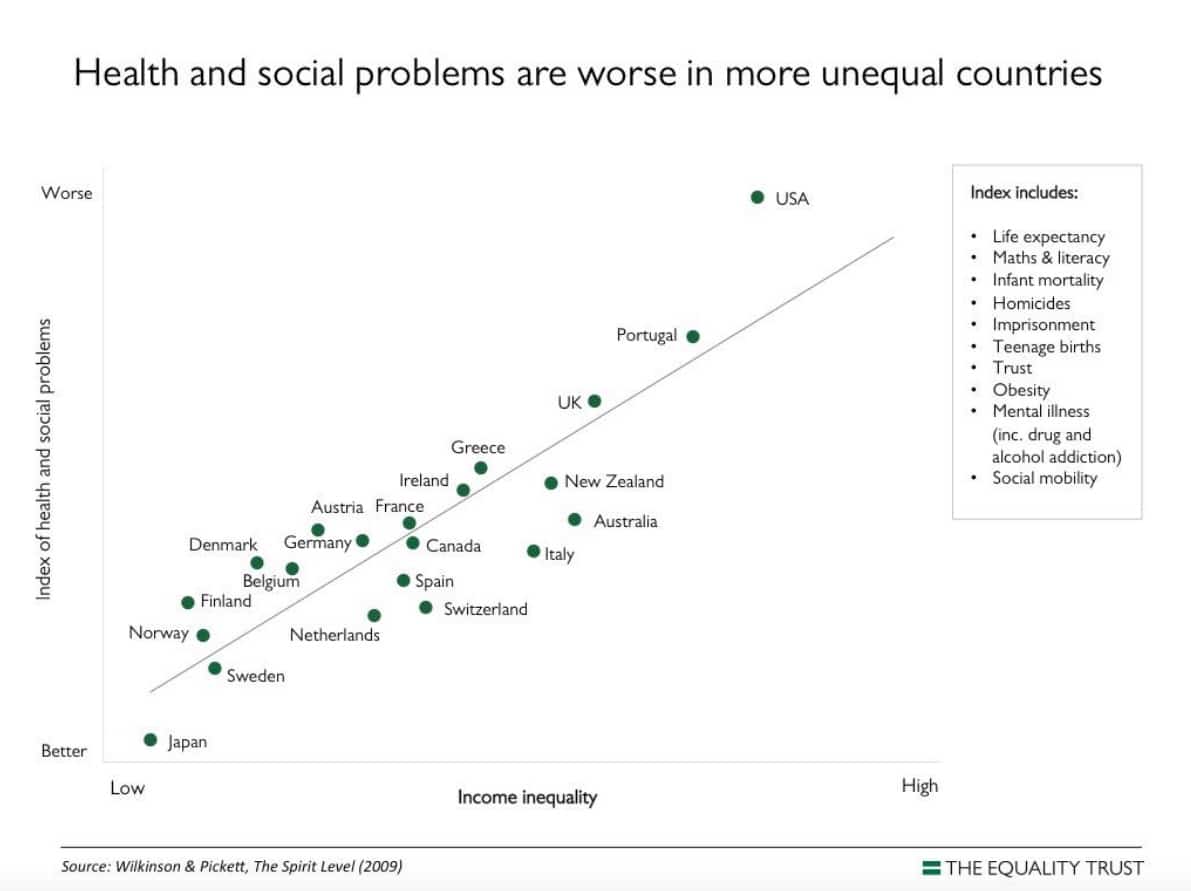 As we manage our way through this crisis, it is time to think about an integrated, comprehensive, equitable health system. It would be good for the economy.

Further, it is time to look at restructuring our society to recognise and address those factors outside the health system that affect health and therefore affect our economy and our individual well-being.

Tim Woodruff is Acting Chair of the Australian Health Care Reform Alliance and President of the Doctors Reform Society, an organisation of doctors and medical students promoting measures to improve health for all, in a socially just and equitable way. On Twitter: @AusHealthReform and @drsreform

This article was first published at Pearls and Irritations, and is cross-published here with permission.

PrevPreviousThree simple things Australia should do to secure access to treatments, vaccines, tests and devices during the coronavirus crisis
NextTime to think about the future of humanity as we face ten catastrophic risksNext