COVID-19 and mental health: moral and logistical challenges and an ongoing toll

The impact of COVID-19 has hovered over many sessions and the staging of this week’s Royal Australian and New Zealand College of Psychiatrists’ annual Congress in Hobart, one of the first medical specialty conferences to meet once again in person.

Yesterday the pandemic’s impact was centre-stage at a high level trans-Tasman panel session at a #RANZCP2021 Presidential Symposium. It heard that, while the worst projections were averted in both Australia and New Zealand, the pandemic has inflicted a high and continuing toll on mental health, particularly for young people.

New Zealand’s COVID-19 experience came amid a series ongoing “psychosocial crises”, in the wake of tragic events like the Christchurch earthquakes and mosque massacre and, as did Australia’s, underscored the critical importance of the social determinants of health, including income support.

Croakey journalist Dr Amy Coopes reports below for the Croakey Conference News Service. You can bookmark all her #RANZCP2021 stories here, with more to come after the Congress closes today.

The worst-case predictions of a pandemic-fuelled surge in suicide did not come to pass, but demand on an already-ailing mental health system has ballooned, with no signs of abating and warnings to psychiatrists that it could be years before we pass the peak.

And while a swift pivot to telehealth was hailed as life-changing for many, it had been far from a panacea, highlighting and exacerbating access disparities and placing a new level of strain on practitioners, the Royal Australian and New Zealand College of Psychiatrists’ annual Congress has been told.

The coronavirus pandemic was front and centre at this week’s RANZCP Congress, themed ‘Influencing and being influenced by the world around us’ and one of the first major medical specialty conferences to be held in Australia since the global outbreak began.

It has highlighted how mental health has come under the spotlight as never before in an unprecedented year of isolation, loss, uncertainty and rapid change, throwing many of the givens in our modern life into question.

RANZCP President Associate Professor John Allan said it had posed a “moral challenge” to the College to ensure training continued, because the mental health and wellbeing of Australia and New Zealand was at stake.

The group shared their experiences of working behind the scenes on the coronavirus responses of Australia and New Zealand, widely regarded as among the world’s best, with very few infections or deaths in relative global terms. 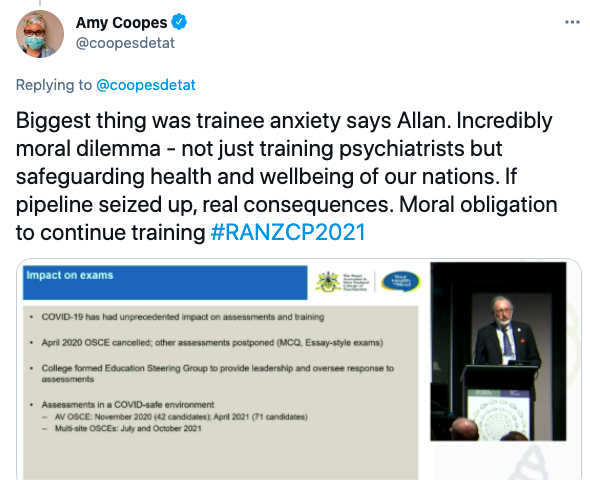 More than 12 months on, with millions of vaccine doses administered and little local transmission to speak of since the suppression of Melbourne’s second wave, Wright said it was easy to forget where we had been, mired in incredibly grim forecasts and “contemplating health system collapse”.

Based on the information out of China and other outbreak centres, NSW was expecting some 25,000 deaths and a 10-week ICU surge maxing out capacity by more than 300 per cent.

It made plans for a massive 550-bed makeshift hospital at Olympic Park, with further field hospitals at the Sydney Convention Centre and Gore Hill Oval. Scrambled contingency plans looked at turning frozen food factories, industrial warehouses and even pubs into makeshift morgues – contemplating a city under siege, “like the aftermath of a war zone”.

Amid a “cacophony of voices about what was going on, some of which was pretty unhelpful”, Wright said it soon became obvious just how important accessible, “consistent, clear and realistic” messaging from government was going to be, and an enormous upskilling of communications capacity became an early priority.

Information was a precious commodity, particularly in those early days, and Wright said a confidential team of analysts known as the Critical Intelligence Unit was at the heart of NSW operations, combing through media reports and scientific publications to keep officials abreast of the latest developments.

They were “completely invisible to the rest of the community, but vital” to the government’s COVID-19 strategy, producing a daily evidence digest, updating the internal Risk Monitoring Dashboard and public-facing Agency for Clinical Innovation (ACI)  sites Living Evidence and Evidence Check.

Offering a glimpse inside the government’s clinical war-room, Wright discussed the formation of the NSW COVID-19 Clinical Council, a group bringing 30 specialist areas together weekly with bureaucrats to discuss health system priorities in the response.

Wright said personel protective equipment (PPE) became a “lightning rod, a proxy for anxiety – for health care workers in particular, and rightly so”, and there was a high level of distress and distrust around these and other issues in a “pretty torrid” first month.

Overtime the Clinical Council came to be an effective and important plank of the NSW response, he said, also applauding the formation of National Cabinet, which he said was not only valuable in coordination but allowed information-sharing and collaboration.

At a specialty level, Wright said the nation’s chief psychiatrists also met monthly throughout the pandemic and this allowed for peer review and debriefing across jurisdictions, and discussion of common challenges. 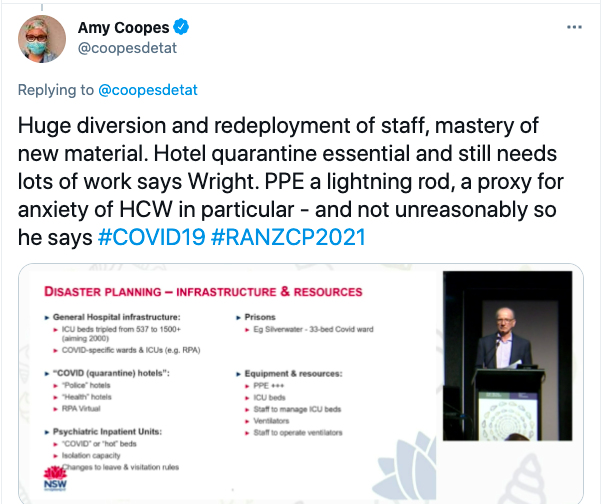 Telehealth and the social determinants

The major, and persisting issue confronting the mental health system was increased emergency department presentations by young people, Wright said – a concern echoed by Dr Ruth Vine and by Dr Arran Culver from across the Tasman, a former child psychiatrist, who said it was borne out nationally and trans-nationally, along with a rise in this group of eating disorders.

Vine’s position as deputy chief medical officer for mental health was created by the Federal Government in response to the pandemic, amid frightening prediction early on of an “explosion” in suicides.

While that didn’t eventuate, she said concerns about the system’s ability to cope pre-dated COVID-19, which had not arrived in a vacuum for Australia’s mental health services – already stretched to the limit by growing demand, complexity, fragmentation and inequities of access.

While the system and some of its users benefited from a pandemic-expedited telehealth rollout, Vine said it hadn’t helped everyone and made things more difficult for those without access to a safe, private place to be seen or a secure platform.

This was recognised early on by New Zealand, according to Culver, who said the government reached a ‘zero data’ agreement with the nation’s telcommunications companies to allow for free access to COVID-19 related information and services, and engaged in a mass buy-up and distribution of cheap mobile handsets to disadvantaged communities.

Vine said more beneficial and significant for mental health during the crisis were ‘non-health’ interventions like JobKeeper, targeting the social determinants of wellbeing. 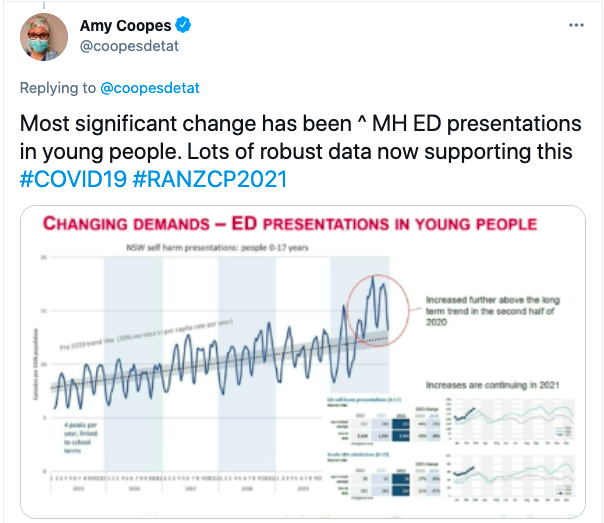 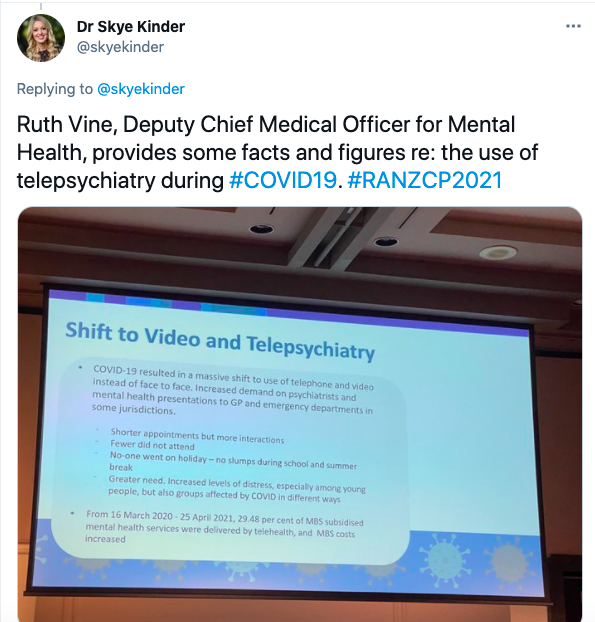 Culver shared similar experiences from New Zealand, where he said there was early recognition – informed by a series of national disasters in preceding years including the Canterbury earthquakes – that the major impacts were not going to be viral. Rather they would be on people’s lives and livelihoods: income, food security, housing, employment and family and the exacerbation of family and domestic violence by conditions of confinement.

Culver said New Zealand had actually been in psychosocial crisis response activation mode for most of the few years preceding COVID due to crises including the earthquakes that hit the Christchurch region, the White Island volcano eruption and the Christchurch massacre. Still nothing had quite equipped them for a national pandemic response, he said.

While New Zealand had escaped any major primary impact from COVID-19 itself, Culver said there had been “significant secondary and economic impacts, but these were managed reasonably well”.

The country’s updated psychosocial response plan had a stronger focus on the social determinants of health and at-risk groups, including the newly unemployed, people who were already in hardship, and children and young people.

This latter group had been demonstrated as the most vulnerable to mental health impacts following the Canterbury earthquakes, Culver said, with a delay in onset of about six months and a “very long tail”, in the order of about three years.

New Zealand had seen a similar COVID-19 spike in youth mental health presentations, but he said this had peaked after about 6-8 weeks.

Vine questioned when, if ever, the surge in demand seen during COVID-19 would abate, given it was showing no signs of slowing in Australia.

Adding to this, Culver said there were new challenges ahead, with a current phase of ‘languishing’ and fatigue with eradication measures that were now bringing diminishing returns, and a new kind of psychological readiness needed around COVID endemicity as borders began to open.

Culver paid tribute to a “remarkable” public response in New Zealand to date, which he put down to a unity and clarity of messaging – a “single source of truth” – compared to other jurisdictions. 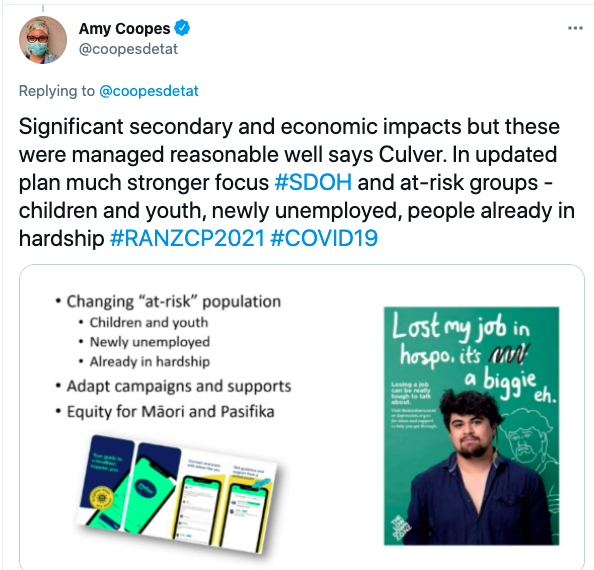 The panellists were asked to comment on the role of the media, and whether they had helped or hindered.

Largely, Vine said media outlets had been responsible, for example not blowing the suicide modelling early on out of proportion.

Wright agreed they had been quite respectful of health authorities’ role as the “voice of truth, especially in critical stages”, and urged his colleagues to reflect on what had been done well. Overall, he said, the response was one health care workers should be proud of.

The RANZCP Congress closes today in Hobart. Join the conversation at #RANZCP2021. Bookmark this link for our continuing coverage. 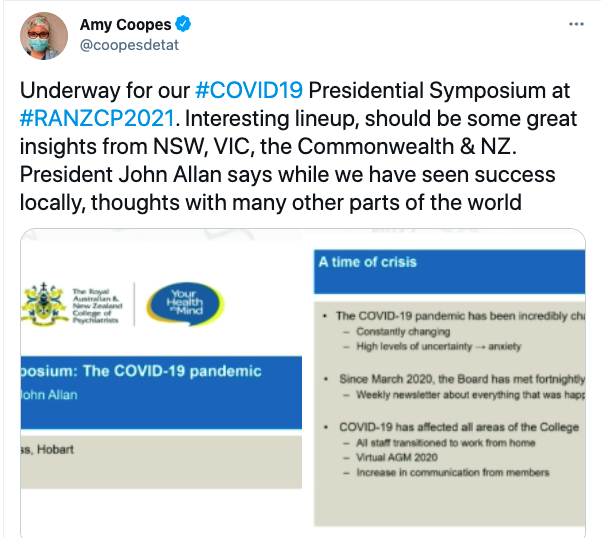 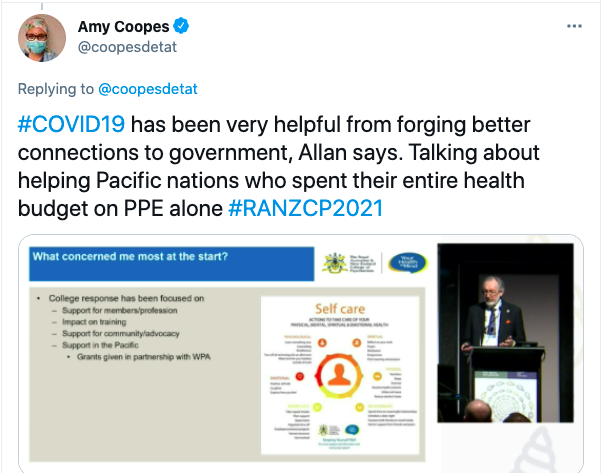 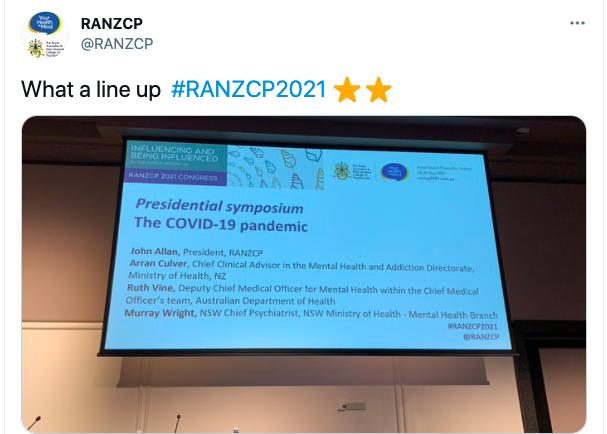 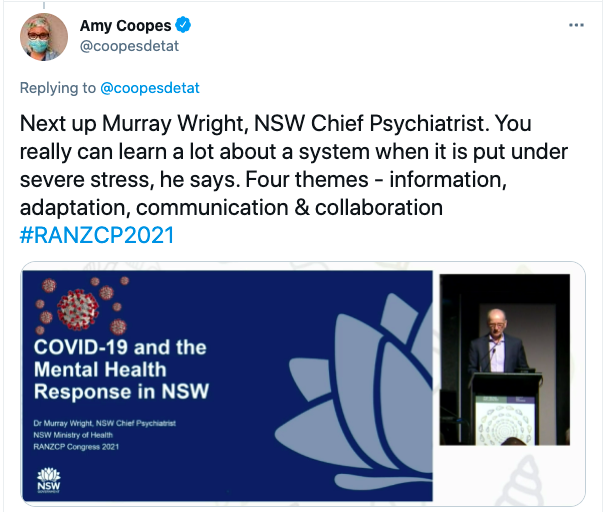 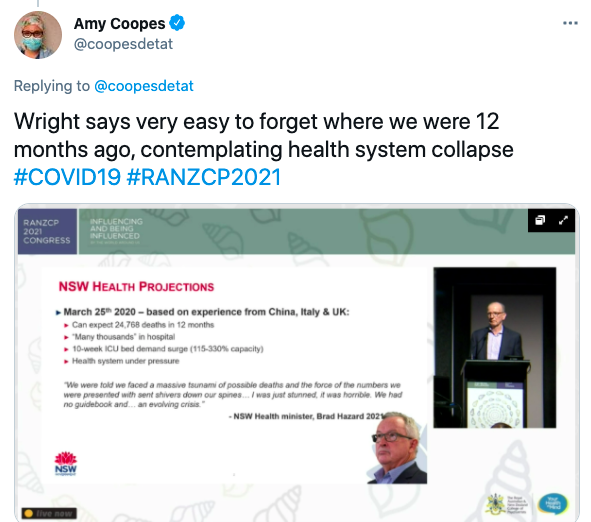 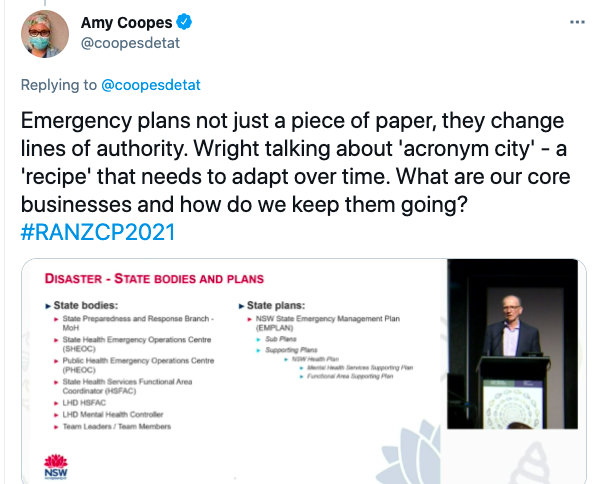 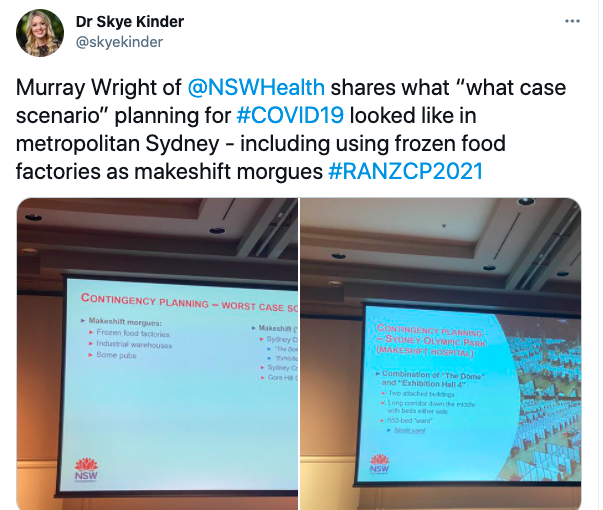 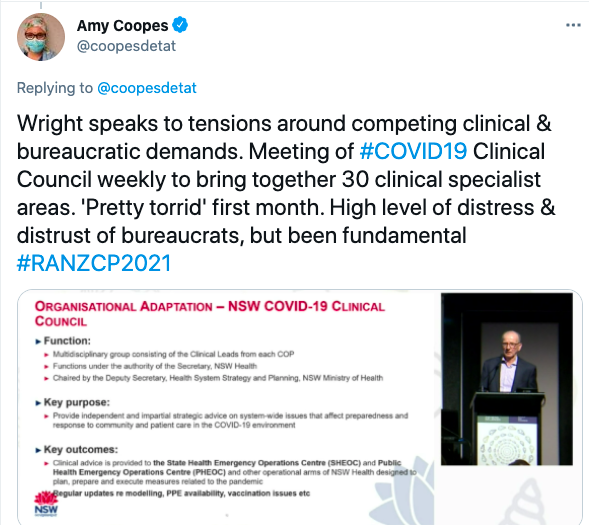 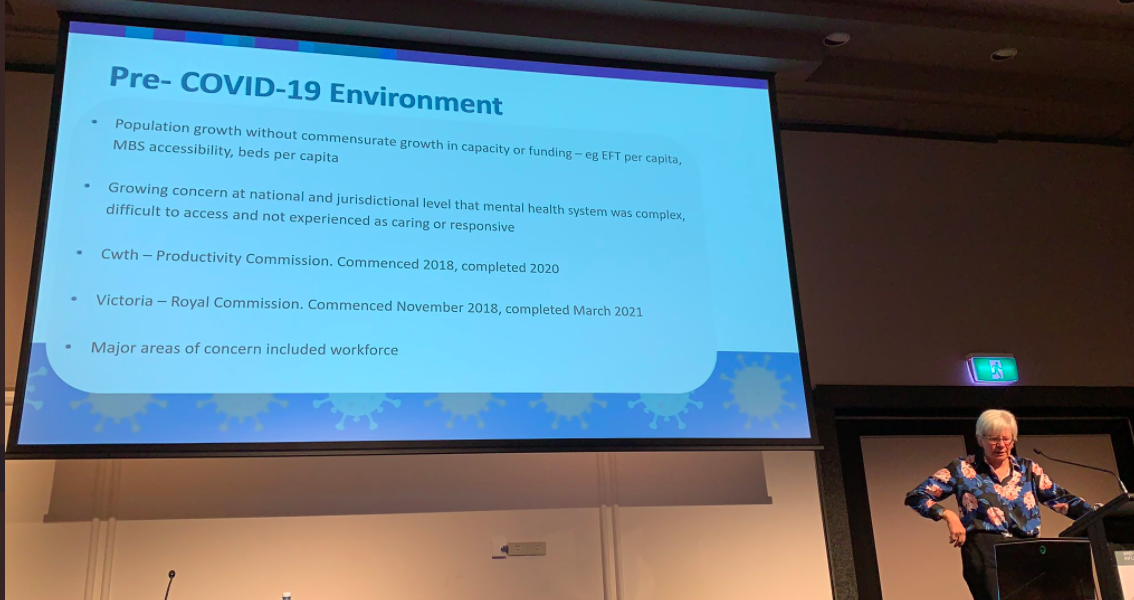 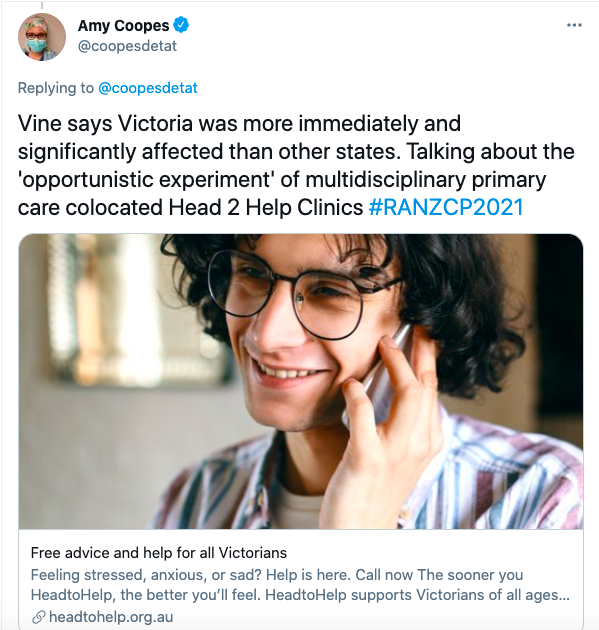 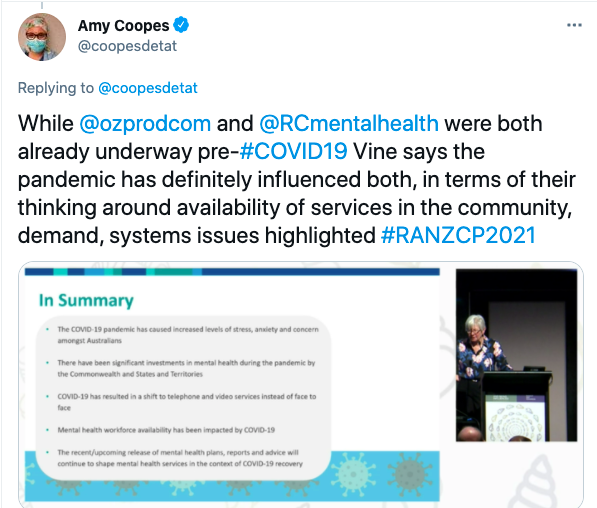 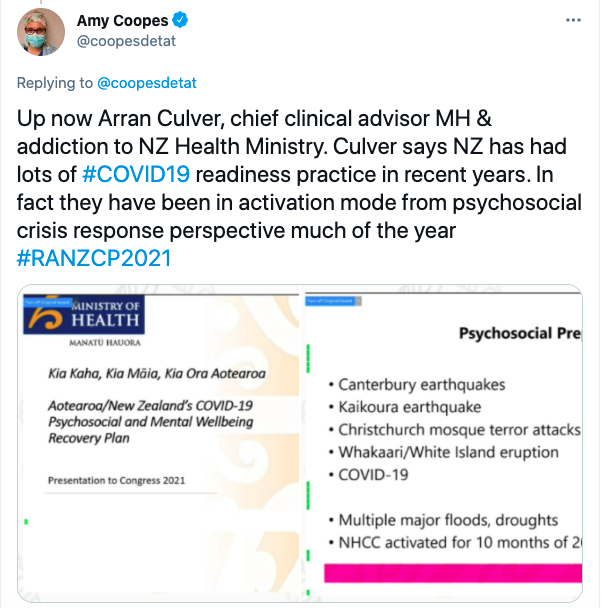 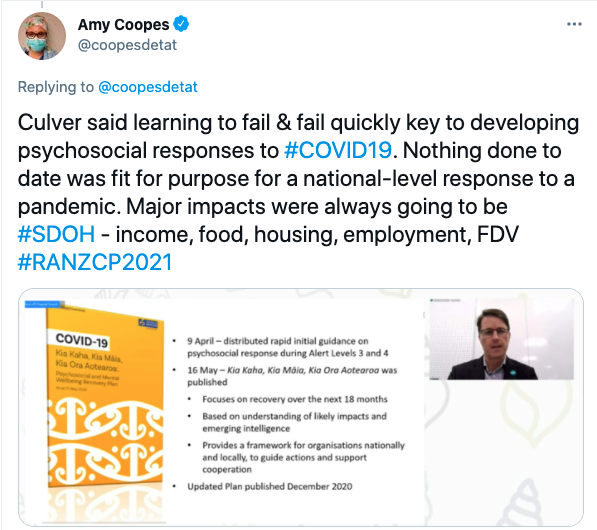 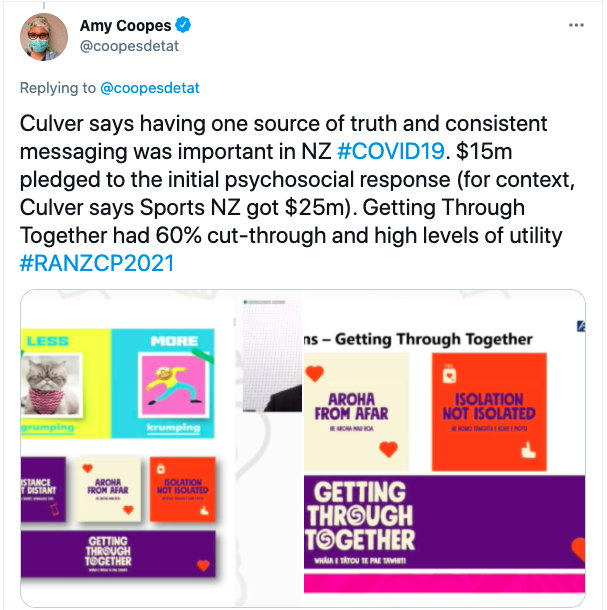 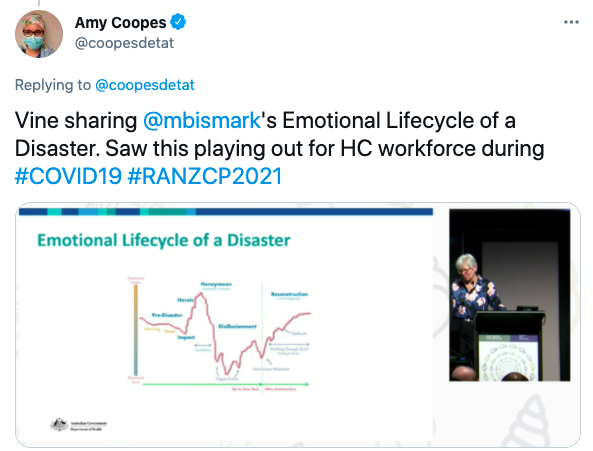