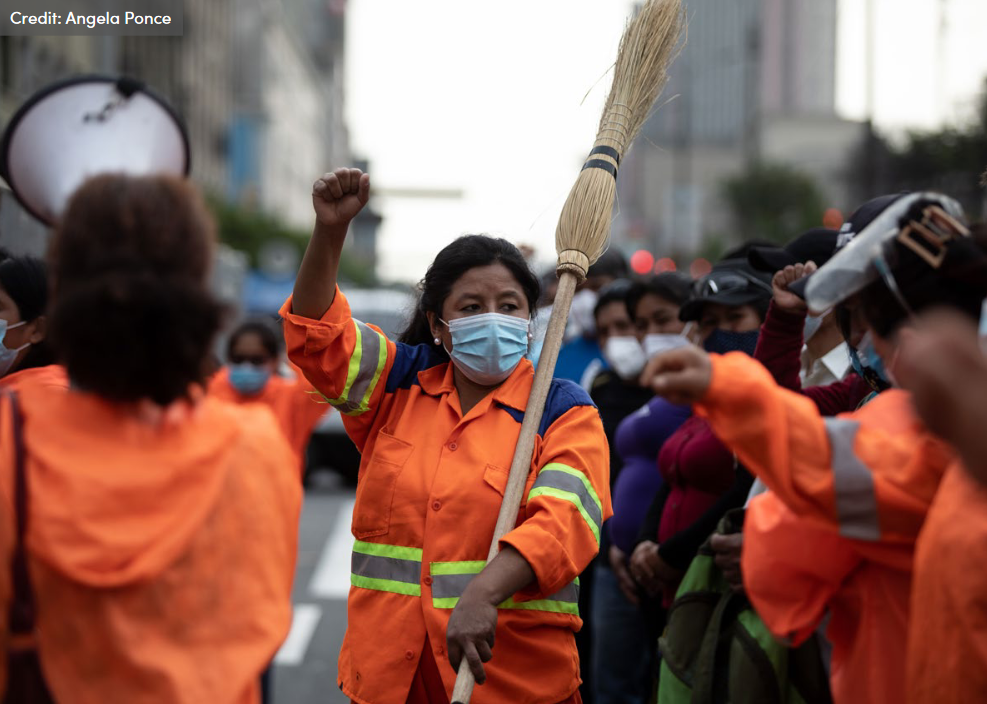 From the 'COVID-19: Make it the last pandemic' report: Angela Ponce

“COVID-19 should be the last pandemic”: call to action from expert panel and public health leaders

Introduction by Croakey: A significant new report — COVID-19: Make it the last pandemic — has blamed a “toxic cocktail” of failures, errors and inequalities that have turned the COVID-19 pandemic into “the 21st century’s Chernobyl moment”.

The report, commissioned by the World Health Organization at the urging of countries like Australia, has recommended a fundamental overhaul of international pandemic responses, including a Pandemic Treaty and strengthened WHO, and for rich countries to act immediately to get billions of vaccine doses to poorer nations.

In a radio interview, Prime Minister Scott Morrison thanked the panel for its work and said it’s “important…we learn the lessons to protect the planet, the world’s population, from future pandemics” but he made no comment on whether Australia will support its recommendations, as public health experts and media have urged.

The combination of poor strategic choices, unwillingness to tackle inequalities, and an uncoordinated global health response system allowed the COVID-19 pandemic to trigger a catastrophic human and socioeconomic crisis.

That’s the finding of a report by the Independent Panel for Pandemic Preparedness and Response, headed by former New Zealand Prime Minister Helen Clark and former Liberian President Ellen Johnson Sirleaf and released this week.

The report, COVID-19: Make it the Last Pandemic, finds that the system, having ignored copious warnings of a pending pandemic, is “clearly unfit” as it stands now to prevent another.

It says the pandemic has caused the deepest shock to the global economy since World War Two and is “the 21st century’s Chernobyl moment…because it has shown so clearly the gravity of the threat to our health and well-being”.

“Our message is simple and clear: the current system failed to protect us from the COVID-19 pandemic. And if we do not act to change it now, it will not protect us from the next pandemic threat, which could happen at any time,” Sirleaf said in a statement.

Urging the creation of a Global Health Threats Council, a Pandemic Treaty, strengthened World Health Organization and the rollout of billions of vaccines to poor countries, the Independent Panel said its eight month investigation has “laid bare” the lack of high-level political leadership in coordinated global action against the pandemic.

“For the Panel it is clear that the combination of poor strategic choices, unwillingness to tackle inequalities, and an uncoordinated system created a toxic cocktail which allowed the pandemic to turn into a catastrophic human crisis,” it said.

The panel found that individual countries with the poorest results in addressing COVID-19 had “uncoordinated approaches that devalued science, denied the potential impact of the pandemic, delayed comprehensive action, and allowed distrust to undermine efforts”.

Many, it said, had health systems beset by long-standing problems of fragmentation, undervaluing of health workers and underfunding, and lacked the capacity to mobilize quickly and coordinate between national and subnational responses.

“COVID-19 should be the last pandemic,” Clark and Sirleaf wrote in The Lancet. “If the global community fails to take this goal seriously, we will condemn the world to successive catastrophes.”

You can read the Main Report, including a summary, the companion evidence-based narrative and a series of background documents, or watch videos of the launch event and post-launch media conference.

The report “paints a stark picture of the failures that led to the biggest health, social, and economic disaster in living memory”, according to Burnet Institute Director and CEO Professor Brendan Crabb and former Health Department head Jane Halton, chair of the Coalition for Epidemic Preparedness Innovations.

In a joint Opinion piece, they call on Australia to back key report recommendations, particularly on the global vaccine rollout and strengthening the authority of WHO.

“Robust contributions to a global effort are not charity, but rational investments,” they write, adding that this point “should not be lost on Australia, an influential player in WHO and the region.”

“While there’s much Australia should do through formal and informal channels, likely the most influential action would be an unambiguous and bipartisan public expression of just how critical it is to have a strong WHO in pandemic preparedness and response, and of endorsing the report’s pathway to get there,” they say. 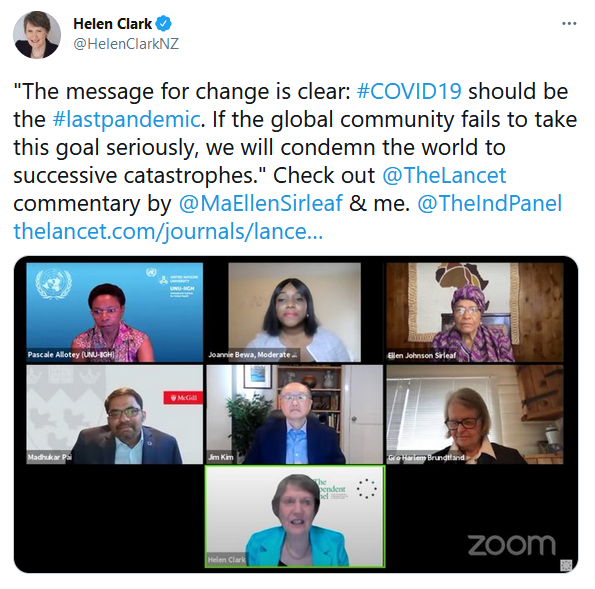 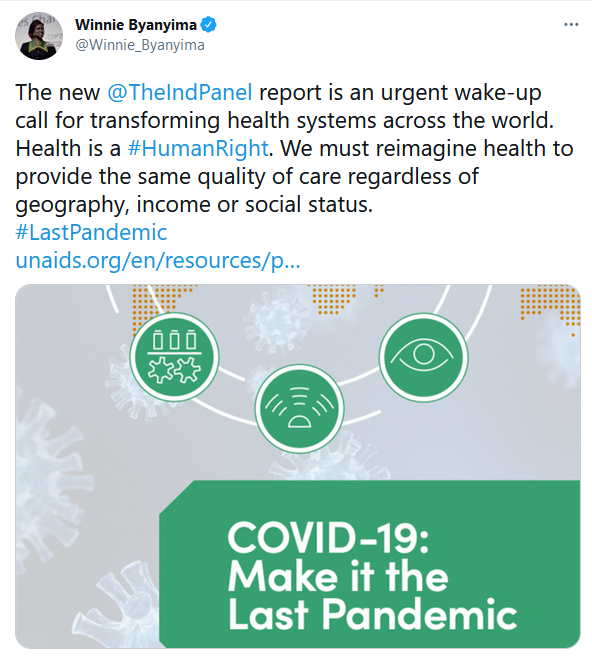 The Independent Panel was appointed by the World Health Organization last year to conduct an independent, impartial, and comprehensive review of the pandemic, looking at the state of pandemic preparedness before COVID-19, the identification of SARS-CoV-2 and the disease it causes, and responses globally, regionally, and nationally.

The report is a compelling, clearly written call to arms on leadership, responsibility, transparency and equity, that details the devastating reality of the COVID-19 pandemic and the health, social and economic crises that it has precipitated.

With the pandemic still killing more than 10,000 people a day and fewer than one in 100 people in low-income countries having yet received a first vaccine dose, it urges both short-term and long-term reform, with a series of immediate recommendations to halt the spread of COVID-19, including that:

It also makes longer-term recommendations for preventing a future pandemic, including to:

It said it had assessed the set of recommendations against one criterion only: if they had been in place, would they have stopped the COVID-19 pandemic?

“We believe the answer is yes,” it said, urging full and timely implementation.

“Given the increasing stakes, monitoring pandemic threat needs to be on the agenda of decision-makers at the highest levels of governmental, intergovernmental, corporate and community organizations,” it says.

The scathing report says the current system—at both national and international levels— was not adequate to protect people from COVID-19, with “delay, hesitation, and denial” characterising too many responses.

It says it took too long for the WHO to declare a Public Health Emergency of International Concern, its “loudest alarm”, and its declaration was not followed by forceful and immediate responses in most countries, and that February 2020 was “a lost month in many countries”.

The failure of most countries to respond effectively in February 2020 was because they did not sufficiently appreciate the threat and know how to respond, and therefore a ‘wait and see’ approach “seemed a less costly and less consequential choice than concerted public health action”, it said.

As well, there was no international system that had created accessible stockpiles of equipment and supplies like personal protective equipment (PPE), diagnostic tests and oxygen that were sufficient for the scale of country needs, or that could “trigger the flow of resources and step in to regulate orderly access”. The result was a high death toll particularly for health care workers.

The health systems that managed the COVID-19 response better quickly mobilized, trained and reallocated their health workforce with a combination of hiring new staff, using volunteers and medical trainees and mobilizing retirees.

But while much of the early response to COVID-19 involved missed opportunities and failure to act, the report said there was good early action in some areas, most notably in research and development and particularly in vaccine development, aided by expertise and technology from decades of work — especially on HIV, Ebola and cancer vaccine research and immunology.

The Independent Panel said the pandemic has shaken some of the standard assumptions that a country’s wealth will secure its health.

“Leadership and competence have counted more than cash in pandemic responses. Many of the best examples of decisive leadership have come from governments and communities in more resource-constrained settings,” it said.

Australia is only mentioned a few times in the papers, included in countries that had poor stockpiling of pandemic supplies in the wake of the 2009 swine flu outbreak which many thought was overhyped and noted among an elite group of nations with sufficient vaccine doses to date to cover 200 per cent of its population.

The Panel also raised deep equity concerns, saying COVID-19 has been “a pandemic of inequalities and inequities”, with devastating social and financial consequences for those already disadvantaged, with up to 125 million more people are estimated to have been pushed into extreme poverty.