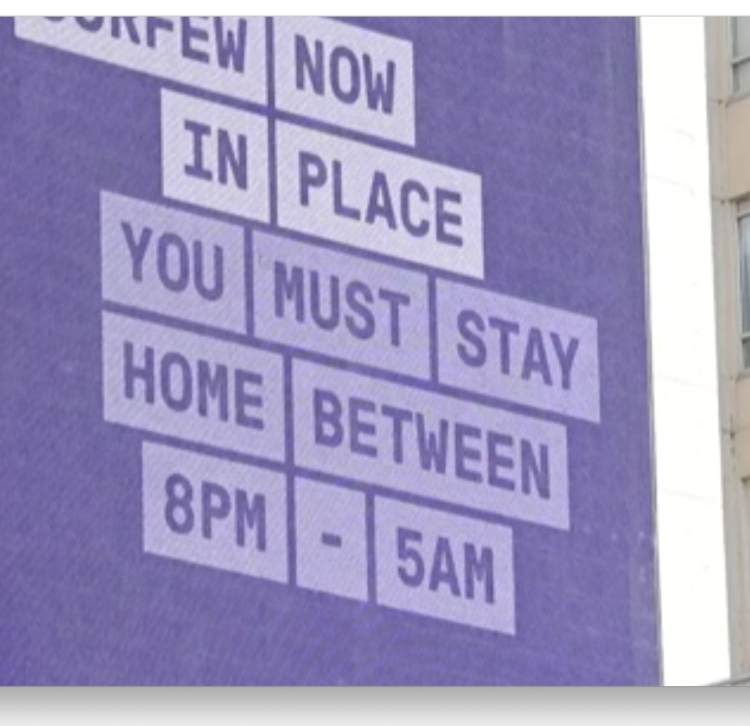 The COVID-19 pandemic is a shared global experience; however, its impact can differ greatly between individuals, communities and nations.

In Australia the situation varies significantly from state to state with residents of Western Australia, the Northern Territory and the ACT currently enjoying the most freedoms.

In contrast, people in Melbourne and some parts of regional Victoria are living with some the most stringent restrictions imposed anywhere in the world.

Images of empty freeways and the usually busy intersections of Melbourne’s major roads devoid of traffic, posted on Twitter by the State’s Premier Daniel Andrews, provide a tangible reminder of how these measures have transformed the city. 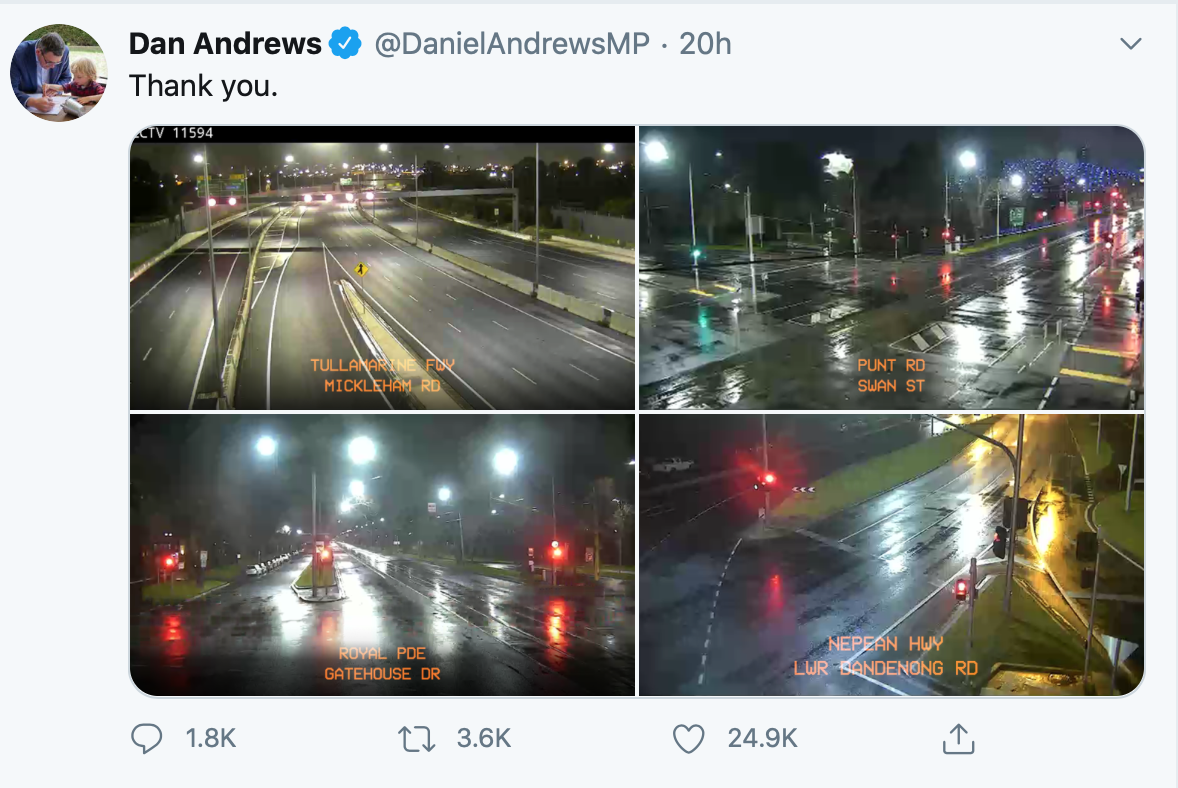 Living with these restrictions can be an isolating experience. But the experiences of Melburnians during this second lockdown period are not going unnoticed. Other countries are watching the situation in Victoria closely and reporting on the impact of the current measures.

Below, Croakey editor Jennifer Doggett provides a snapshot of international English language coverage of the Melbourne lockdown and identifies some of the key messages being communicated through these media sources to readers worldwide.

Law enforcement measures are a key theme picked up in the international media reporting on this issue.

Canada’s CTV news reported on the increased police presence in Melbourne since the lockdown measures were introduced:

Patrolling police officers have been a frequent sight in Melbourne, a city of 5 million, in recent weeks — as authorities seek to enforce rules on leaving home and on the mandatory wearing of face masks.”

A widely read newspaper from the Philippines also highlighted the law enforcement measures being taken to enforce lockdown measures:

State police were patrolling the city and setting up checkpoints on major roads to stop people heading out to regional areas and spreading the virus from what is now Australia’s pandemic epicenter, with 860 active cases.

The window for police discretion is very small and is closing as the threat to public health and safety created by those breaching the Chief Health Officer’s directions is too great,” Victoria police said in a statement.

Coverage in the Irish Times highlighted the role of defence force personnel in enforcing isolation and quarantine orders:

Meanwhile, Australia’s second-most populous state Victoria said on Tuesday military personnel will be deployed to enforce Covid-19 isolation orders, with anyone caught in breach of those rules facing hefty fines over €12,000.

Australia, once heralded as a global leader in containing the virus, is desperately trying to slow the spread of the virus in Victoria to prevent a national second wave of infections. 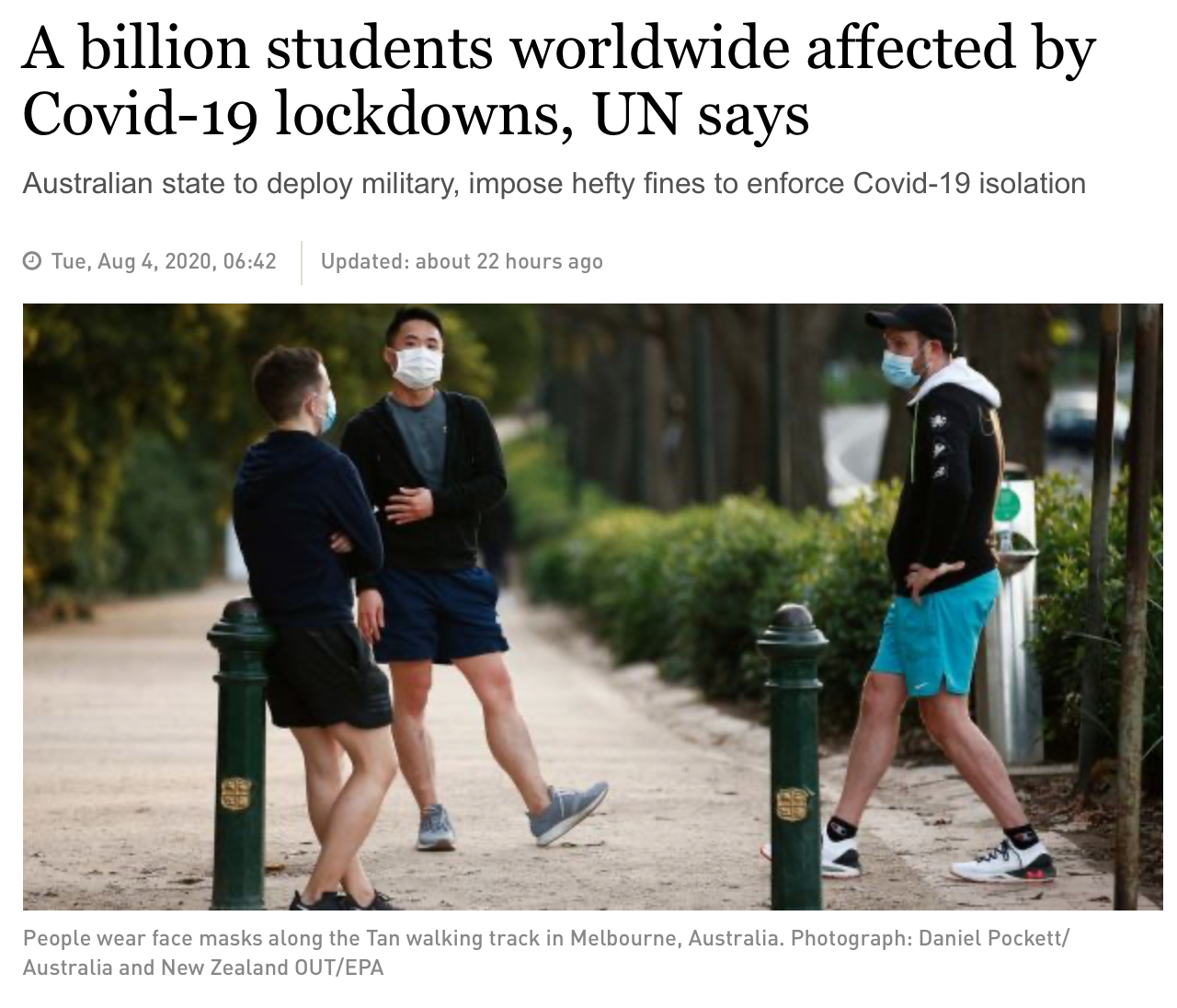 The BBC reported on the emergence of groups of self-defined ‘sovereign citizens’ refusing to comply with public orders:

Chief Commissioner Shane Patton said Victoria Police had seen an “emergence” of “concerning groups of people who classify themselves as ‘sovereign citizens'”.

The sovereign citizen movement – which has roots in the US – is typically used by those who don’t believe in their government’s legitimacy, often arguing their rights are being suppressed by public orders.

Mr Patton said the attack on the policewoman “highlights the type of challenges that we’re experiencing”, adding that people were “baiting” police at checkpoints and refusing to disclose basic information.

“On at least four occasions in the last week we’ve had to smash the windows of cars and pull people out to provide details,” he said. 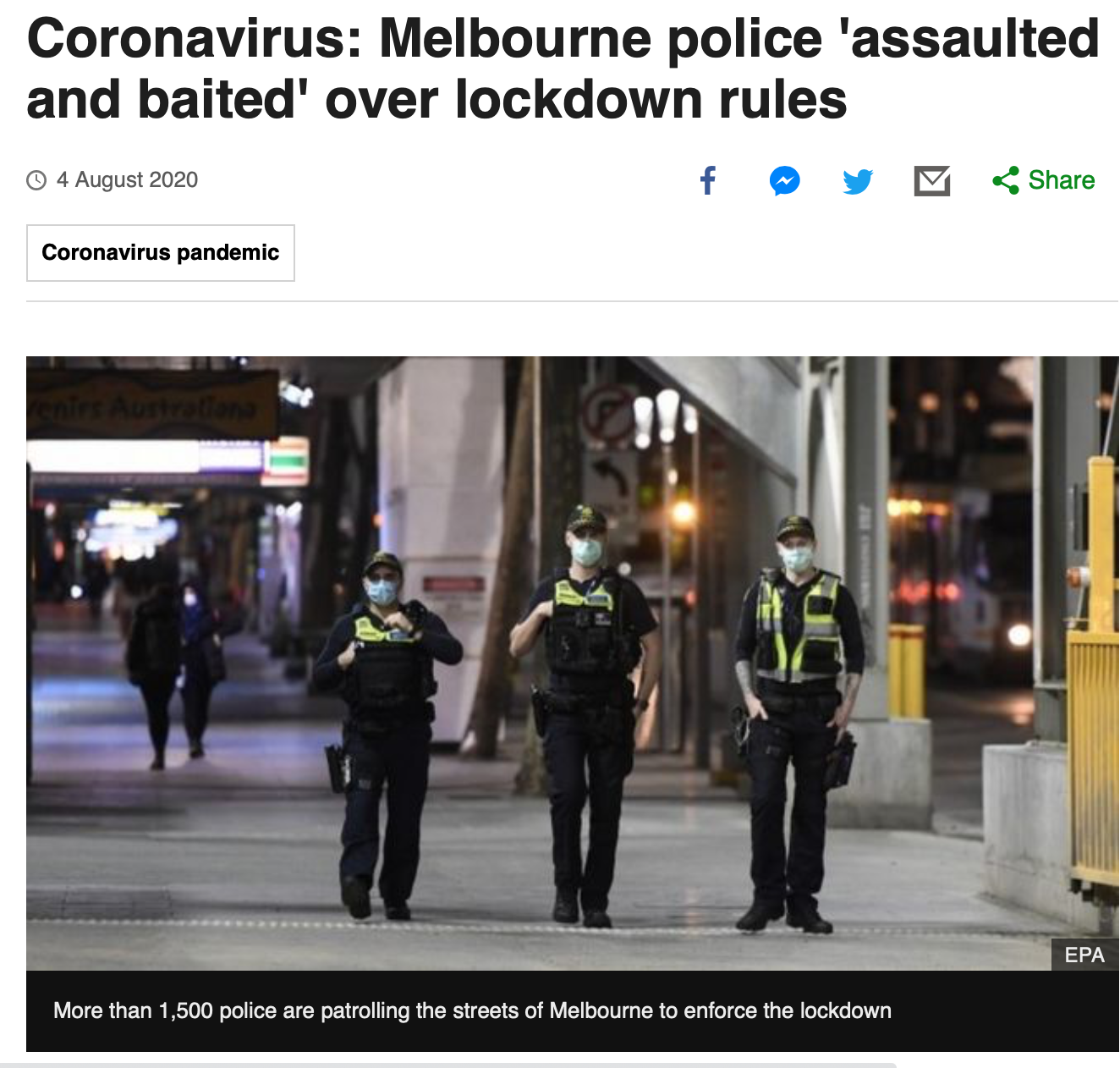 In one case, a 26-year-old policewoman had her head repeatedly smashed into concrete pavement during a confrontation with a 38-year-old woman who refused to wear a mask, Chief Commissioner Shane Patton told reporters.”

Indonesia’s Jakarta Post reported on the impact of the lockdown on small businesses, including book store manager Bill Morton, who described how his normally “vibrant, lovely” patch of the city had transformed into a “ghost town”:

“Pretty well everything is closed around here. So it’s a very strange, quite eerie atmosphere.”

“We can hang in for the time being but operating at the reduced revenue that we are, we can’t do it indefinitely,” he said.

“I think there’s a lot of concern for a lot of the businesses around here, whether they’ll be able to see it through,” adding that many had already closed down permanently.

Lessons for other countries

The China Daily identified a number of reasons for the recent increase in infection numbers in Victoria:

A mixture of complacency, government bungling, poorly trained aged-care workers and a virus that shows no sign of retreating has created a perfect storm for the southern Australian state of Victoria.”

The USA’s CNN coverage stressed how Australia’s experience shows that early success in containing the virus can unravel quickly:

In May, Australia was held up as a global model for its handling of the outbreak, which started with early measures to bar entry from high-risk countries. Stricter curbs on social gatherings, expanded testing, restaurant and bar closures, followed as cases rose, with some states sealing their borders.

But Covid-19 cases in Victoria have risen suddenly in recent weeks, with many new infections in aged care homes and among healthcare workers. Eight of the 13 new deaths on Sunday are linked to known outbreaks in aged care facilities.”

The New York Times described the situation in Melbourne as offering a preview of a scenario that many urban dwellers elsewhere could face in coming weeks and months.

It identified complacency among a minority of the population as one reason for the resurgence of infection numbers:

In Melbourne, a city of five million that is considered a capital of food and culture, the pandemic has come raging back even after a so-called Stage 3 lockdown began in early July — until recently the highest level of restrictions.

Officials have been flummoxed at every turn by the persistent complacency of just enough people to let the virus thrive and multiply.” 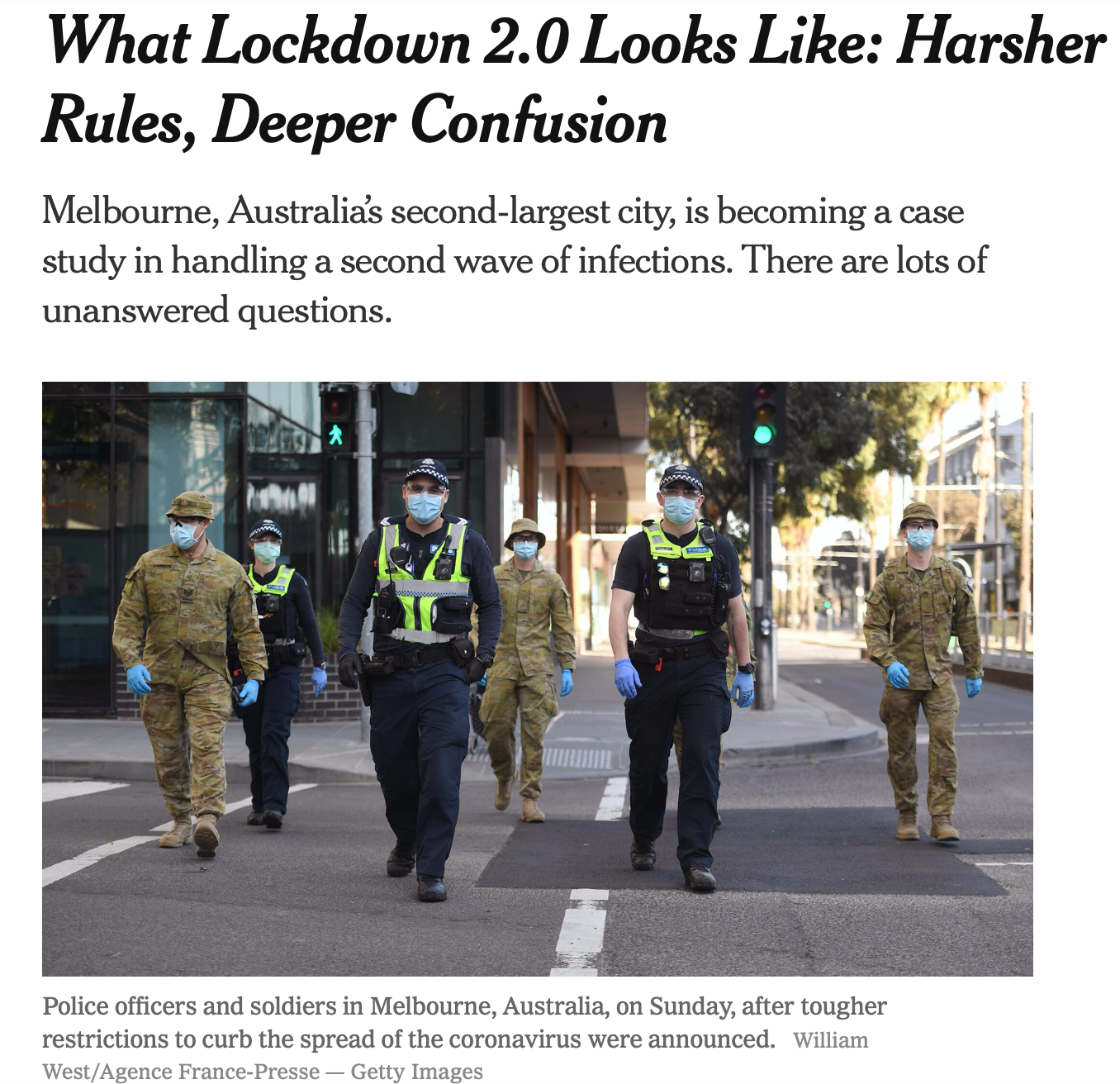 Thailand’s Bangkok Post contrasted Melbourne’s experience with the much lower infection numbers in other parts of the country. It also compared Australia’s situation with that of other countries:

Despite a lockdown, Melbourne has continued to report hundreds of new cases daily even as other states in Australia have reported zero or a small number of cases.

Many other parts of the world are struggling with much bigger outbreaks.”

The Japan Times described Melbourne’s situation as a ‘cautionary tale’ for other cities:

The drastic move highlights how approaches to mitigating the virus have diverged, with some U.S. cities allowing businesses and social activities to resume even as they record daily infection numbers many times Melbourne’s tally. Melbourne provides a cautionary tale for other big, service economy-driven cities such as London that are behind Australia in the pandemic cycle.

It also shows the fragility of early success in battling the virus. Two months ago, Australia’s buoyant Prime Minister Scott Morrison outlined a three-stage plan to lift most restrictions nationwide by the end of July — a goal now in tatters.”

Economic issues were also a major focus of international coverage.

The New Zealand Herald focussed on the impact on employment:

The new phase of restrictions is expected to trigger an estimated 250,000 job losses with Victorian Chamber of Commerce and Industry chief executive Paul Guerra describing the projected effect as “devastating and long-lasting”. 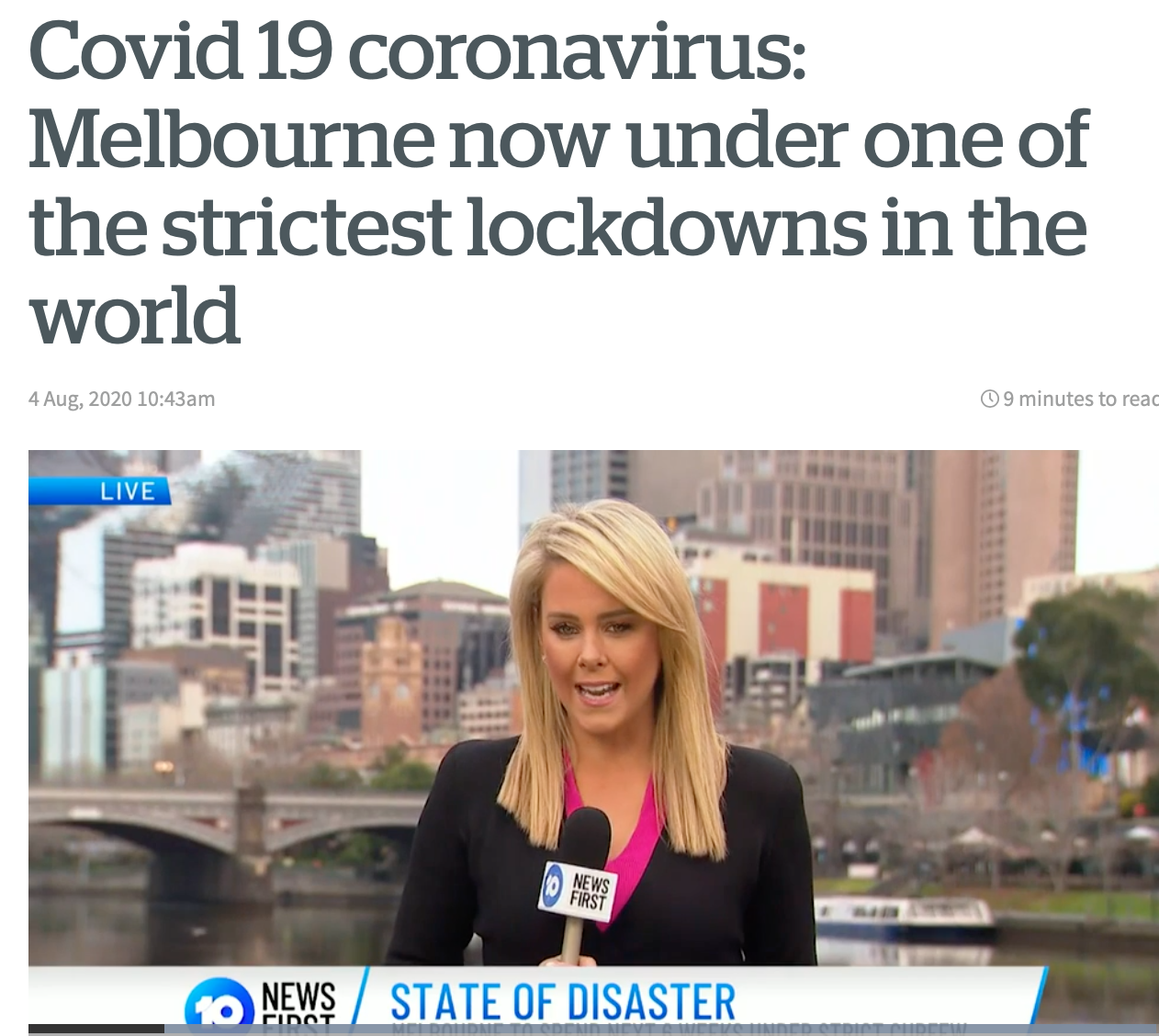 The BBC highlighted the financial support measures put into place to support people unable to work:

A payment for people instructed to isolate for 14 days who have run out of sick leave will also be introduced.

The A$1,500 ($1,070; £815) is mainly aimed at those who cannot access other benefits, and can be applied for more than once, Australian Prime Minister Scott Morrison said.

Authorities hope the new restrictions will reduce transmission of the coronavirus.

Until recently, Australia had had more success than many other countries in tackling Covid-19, but an outbreak in Victoria’s state capital has pushed the nation to its worst point yet.”

Nigeria’s The Guardian mentioned some early regulatory failures which may have contributed to the second wave now being experienced:

Health authorities have linked the resurgence to security bungles at hotels used to quarantine international travellers that allowed the virus to leak back into the community.”

The Japan Times mentioned the situation in high rise public housing blocks in inner city Melbourne and described the Melbourne lockdown conditions as some of the most stringent outside of China:

The measures have included barring about 3,000 residents of public-housing tower blocks from leaving their apartments even for food — reminiscent of the stringent controls imposed in Wuhan, the Chinese city where the virus first emerged, and making Australia one of the only western democracies to mandate that people cannot step outside their homes.” 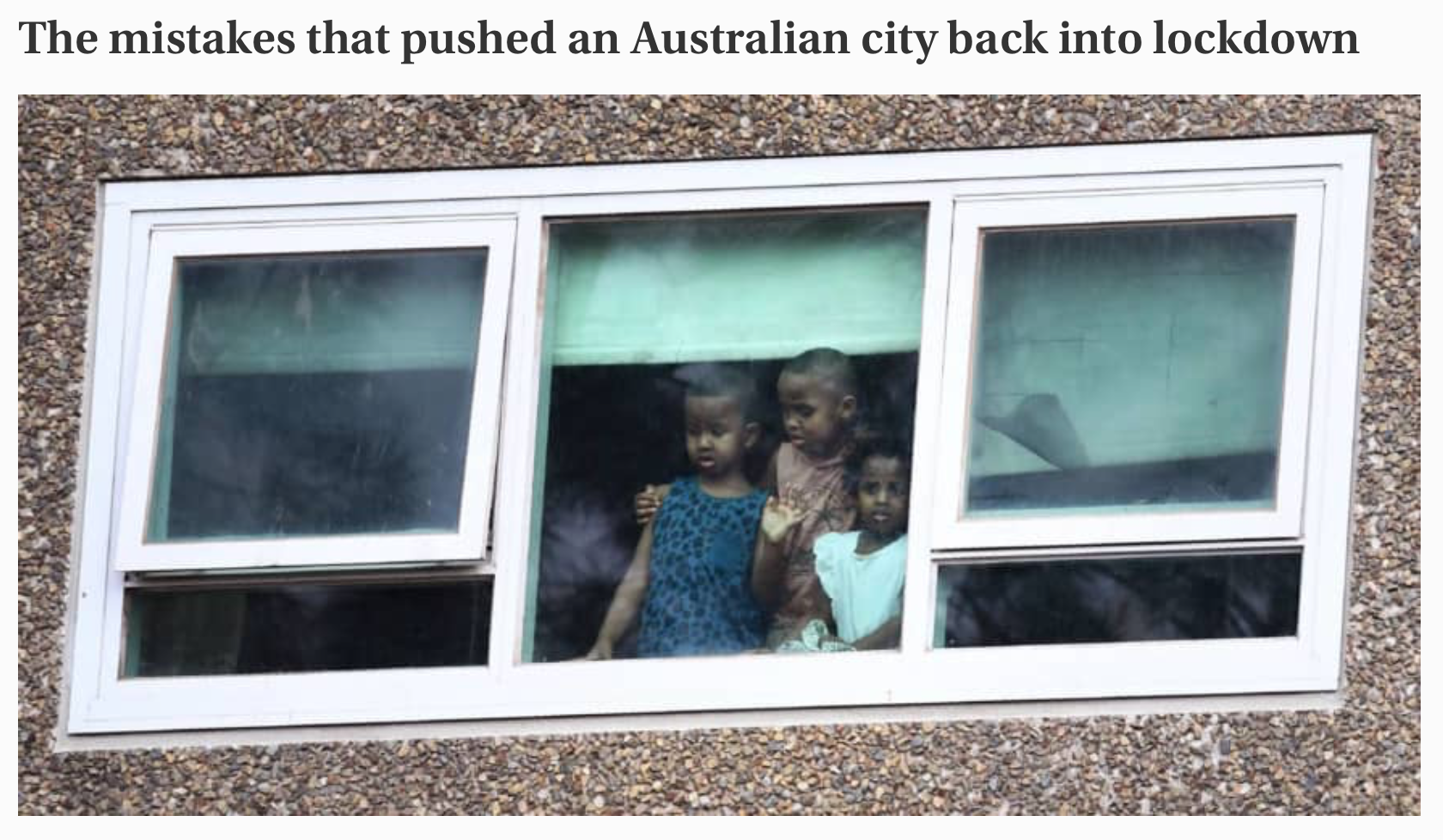 As much as we’d like one, there is no playbook when it comes to a pandemic. But what is clear is that if we don’t do this now, if this doesn’t work, then we’ll need a much longer list of complete shutdowns.”

Singapore’s Straits Times highlighted the experience of a Singaporean, Dilpreet Singh, who runs a tech start-up in Melbourne. The paper says he has been exercising regularly and checking in more often with his business team, as he tries to keep his spirits up while living under lockdown in the Australian city. He said:

It’s a pretty bad mood here on average. Most Australians have listened to the government, so the mood is one of huge disappointment at the situation.

There’s a lot of anger and resentment at the few people who have spoilt it for the rest of us.” 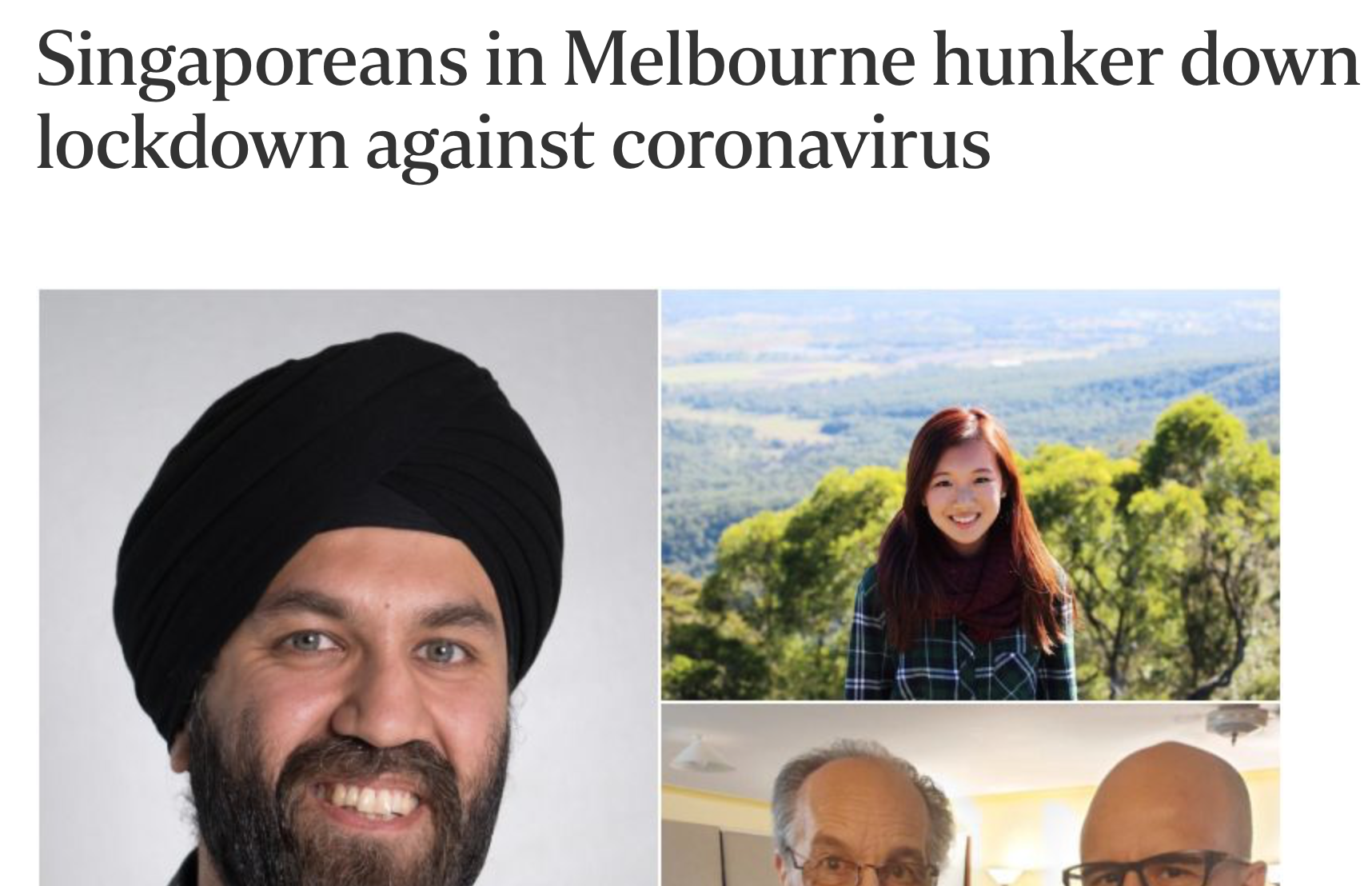 Finally, images of Melbourne’s silent streets and closed shops and businesses have been included in many news stories on this issue, including on the website of Argentina’s Clarin Newspaper which featured this video montage.

PrevPreviousAhead of landmark climate and health report, an artwork tells of the harmful impacts
NextWanted: Merchant of Doubt to deliver ‘intellectual dominance’ in alcohol policyNext