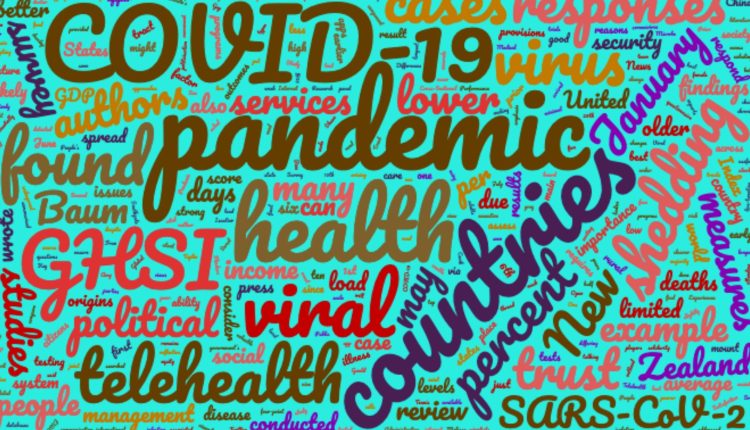 COVID-19 wrap: investigating the origins, on trust and assumptions – and examining telehealth

In a timely wrap, public health researcher Alison Barrett reports on wide-ranging investigations into the nature of COVID-19 and its management.

How did it all begin?

A World Health Organization (WHO) investigation into the origins of the novel coronavirus in central China will release its report to the public soon.

In the meantime, preliminary findings were revealed last night (10 February) at a joint press conference between the WHO and Chinese officials.

The investigation sought to develop a better understanding of events in December 2019, and to determine if the virus started circulating earlier than that; and to understand how the virus emerged and was introduced to the human population.

Key conclusions from their investigation:

Thanks to fellow Croakey News colleague, Dr Amy Coopes, for live-tweeting the press conference. See her detailed coverage here and also compiled by the Threadreader app.

Publication: Explaining COVID-19 performance: what factors might predict national responses? by Baum, F et al., on 29 January 2021 in the BMJ

In an analysis in the BMJ’s COVID-19: The Road to Equity and Solidarity collection Professor Fran Baum, from the Southgate Institute for Health, Society and Equity at Flinders University, and colleagues discussed factors that affected countries’ responses to COVID-19.

In October 2019, prior to the COVID-19 pandemic, the Global Health Security Index (GHSI) published a report summarising results of their analysis of global health security and preparedness for epidemics or pandemics.

One of their main findings was that the world was not prepared for a pandemic, and that while some countries were better prepared than others, no country was fully ready.

The index measured individual countries capabilities to respond to an epidemic or pandemic across six domains: prevention; detection and reporting; response; health system; compliance with norms; and risk of infectious disease outbreak. The higher the score out of 100, the better prepared a country was predicted to be for responding to, and experiencing lower measures of burden from, an epidemic or pandemic.

The United States and United Kingdom scored the highest on the GHSI for preparedness (ranked first and second, respectively) but as Baum and colleagues wrote, “both countries have done spectacularly badly in response to COVID-19, whether measured in deaths or economic damage”.

In this analysis, Baum and colleagues discussed ten potential reasons why the GHSI did not predict countries’ response more accurately.

Another example of this is, as highlighted in an independent review on the early responses to the pandemic, that when the World Health Organization warned of the public health emergency in January 2020, many countries ignored them.

Researchers from the Lowy Institute recently published an interactive COVID performance index with findings that support many of the statements in the analysis by Baum and colleagues, including that “levels of economic development or differences in political systems between countries had less of an impact on outcomes than often assumed or publicised”.

In tracking 98 countries’ performance over six measures (confirmed cases, deaths, cases per million people, deaths per million people, cases as a proportion of tests, tests per thousand people), they found that although similar measures were implemented across most parts of the globe to control the spread of the virus (for example, lockdowns, border closures, stay at home orders), it was how governments “convinced or compelled their citizens to adhere to these measures” that was different and “reflected the nature of their political systems”.

They found that the top ten countries based on the key measures were: New Zealand, Vietnam, Taiwan, Thailand, Cyprus, Rwanda, Iceland, Australia, Latvia and Sri Lanka.

While the GHSI correctly predicted the world was not prepared for a pandemic, the Index was not accurate in predicting which countries would mount a successful response to the COVID-19 pandemic and which would not.

In conclusion, the authors wrote: “The crucial lesson from the COVID-19 pandemic is that an effective response does not rely just on a strong public health system but also requires a society that is fair and offers all its citizens and residents social and economic security.”

Other articles with a focus on global issues arising during the pandemic can be read in the BMJ’s COVID-19: the road to equity and solidarity collection.

Dr Melissa Sweet from Croakey News has summarised many of the articles in the collection in this Twitter thread.

The ‘Second report on progress’ prepared by the Independent panel for pandemic preparedness and response for the WHO executive board in January 2021, can be viewed here.

Publication: Trust in government increased during the COVID‐19 pandemic in Australia and New Zealand, by Goldfinch, S, Taplin, R and Gauld, R in the Australian Journal of Public Administration, on 6 January 2021

An online survey conducted in July 2020 found that levels of trust in both Australian and New Zealand governments has increased substantially since 2009, when a similar survey was conducted by the lead author, Shaun Goldfinch.

The four-point scale questionnaire also asked questions about confidence in public health scientists, management of the pandemic and trust in each countries’ respective COVID-19 tracing apps.

The majority of respondents from both countries agreed that their government’s management of the pandemic had increased their trust in both the government and the health system.

While many agreed that their countries’ COVID-19 tracing apps were in the best interest of the public, only 44 percent of Australians and 24 percent of New Zealanders reported using the app.

Differences in survey responses were measured between Australian states and found to be minimal, with the authors writing that this was the case, “despite different political parties in state government and differing approaches to COVID-19 management”.

The authors suggest that the increased trust in the Australian and New Zealand governments may be due to less politicisation of the pandemic as seen in the United States.

As the survey was conducted during the pandemic, the results may not be reflective or predictive of long-term changes in trust.

The authors wrote in conclusion that “trust in government remains a central component of effective government” and, as discussed by Baum and colleagues, an important factor for a nations’ successful response to the pandemic.

Publication: People’s Experiences and Satisfaction with Telehealth During the COVID-19 Pandemic in Australia: Cross-Sectional Survey Study, by Isautier, JM et al., in Journal of Medical Internet Research, on 10 December 2020

Researchers conducted an online survey in June 2020 to compare Australian’s views of telehealth with traditional face-to-face healthcare and determine whether people thought telehealth would be useful after the pandemic.

Almost 44 percent of survey respondents reported they had used a telehealth service since the beginning of the pandemic.

People who were slightly older, female, had a higher level of education, greater prevalence of chronic health conditions and reported their own health to be poorer than the general population were more likely to use telehealth services than those who did not.

Several factors, including being male, having lower willingness to self-manage health and wellbeing, and having a history of anxiety and depression, were statistically associated with reporting a poor telehealth experience.

While more than half of respondents found their experience with telehealth to be good, some reasons were identified about why telehealth experiences were worse than traditional face-to-face health care experience:

As an alternative option for patients who face challenges accessing or attending face-to-face healthcare, such as people from rural and remote communities, it is promising that so many people found it to be acceptable.

However, if the service is to remain beyond the pandemic, the authors recommend that some of the issues outlined above could be addressed by clearer communication about what types of healthcare can be provided via telehealth.

Publication: SARS-CoV-2, SARS-CoV, and MERS-CoV viral load dynamics, duration of viral shedding, and infectiousness: a systematic review and meta-analysis, by Cevik, M et al., in The Lancet: Microbe, on 1 January 2021

A systematic review recently published in The Lancet found that the average duration of viral shedding of the SARS-CoV-2 virus from the upper respiratory tract is 17 days.

Viral shedding is when the bodies’ cells release infected virus particles, primarily by exhaling, coughing, talking, or sneezing. The particles infected with SARS-CoV-2 may not be actively infectious, but could result in a positive COVID-19 test result. Further testing would determine if the case was infectious or not.

As highlighted in January when international tennis players arrived for the Australian Open Tennis and tested positive to COVID-19, viral shedding can also be detected in older cases. It is important to determine the infectiousness of older cases in order to ensure appropriate infection control measures are put in place.

The authors searched for articles that reported viral load dynamics (the number of virus particles in an individual) and duration of viral shedding in SARS-CoV-2, SARS-CoV and MERS-CoV between 1st January 2003 and 6th June 2020 in academic and grey literature databases. They included studies that had five or more participants, and were case studies, cohort studies or randomised control trials.

The longest duration of viral shedding was 83 days; and shedding duration was found to be longer in adults 60 years and older.

The authors found from that no study identified live virus after nine days of symptoms; so while viral shedding of SARS-CoV-2 can occur up to a few weeks, the virus is generally most infectious in the first week of illness, “emphasising the importance of immediate isolation with symptom onset early in the course of illness”.

The review’s limitations include that only six studies reported viral dynamics “exclusively in children,” indicating the limited information on viral dynamics in children; and that patients in the included studies received different treatments, which may change the viral dynamics. However, it does provide valuable information about the duration of viral shedding and load collated from many COVID-19 studies.

PrevPreviousA minimum price for alcohol helped curb problem drinking in the Northern Territory — is it time for a national rollout?
NextTruth telling and giving back: how settler colonials are coming to terms with painful family historiesNext