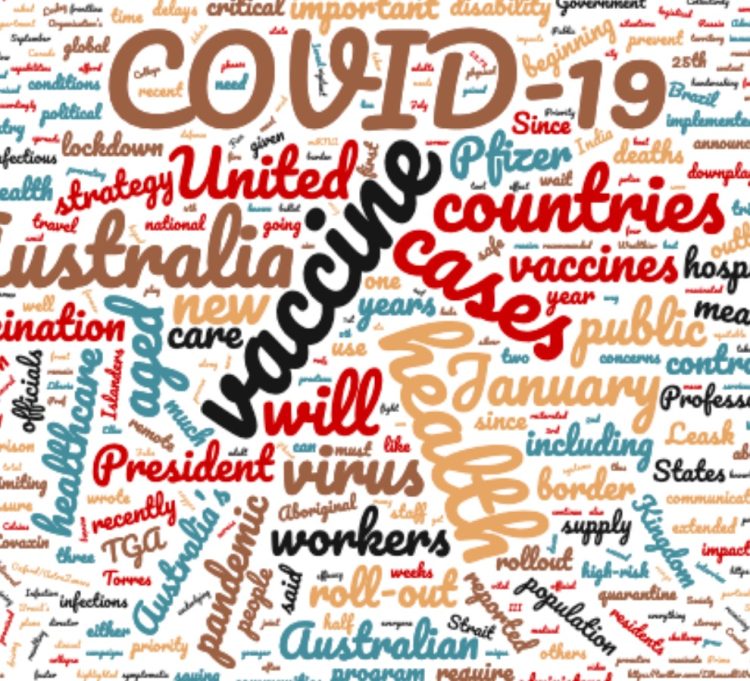 Wrapping the latest news on COVID

COVID-19 wrap: marking an anniversary with a global update and vaccination advice

One year ago, the first case of the novel coronavirus disease, as it was then called, was confirmed in Australia.

In her first COVID wrap for 2021, public health researcher Alison Barrett reports on the latest global developments with the pandemic, and also provides an update on the vaccination roll out in Australia.

Sadly, in the year that has followed, global cases have surpassed 98 million and more than two million have died from COVID-19.

Play this video to see how the cases grew over time.

Collectively, the five countries with the highest number of COVID-19 cases (United States, India, Brazil, Russia and United Kingdom) have contributed to more than half (52.73%) of the global distribution of cases. 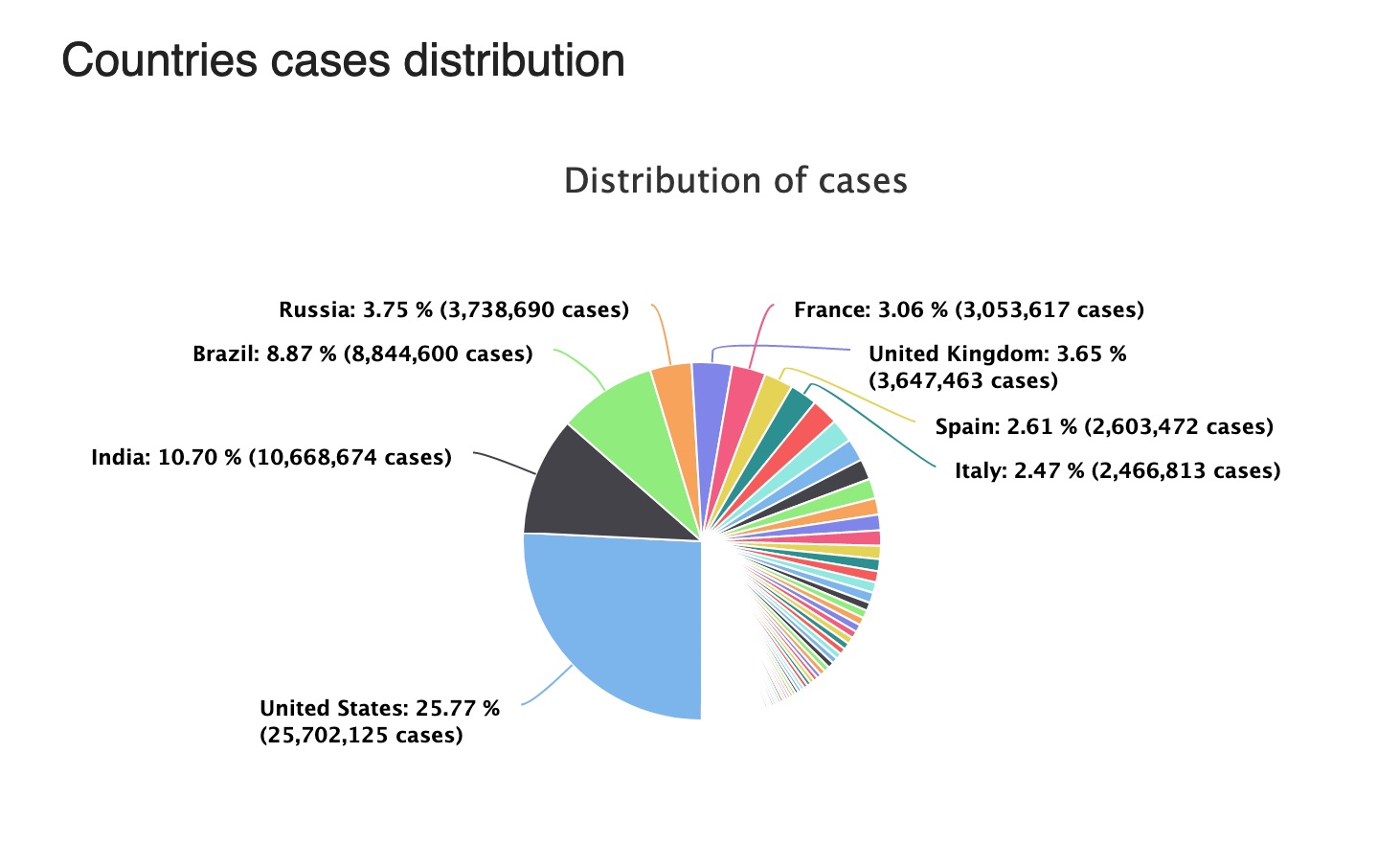 Since Thanksgiving, in November 2020, the United States has been experiencing an upswing in cases which has continued into the new year, resulting in the country reaching 4,000 deaths from COVID-19 per day and putting hospitals and healthcare under immense pressure.

The new President and leadership team inaugurated on 20 January have promised to prioritise tackling COVID-19. With an evidence-based COVID-19 plan, it is hoped that the new Administration can slow down the virus’ impact in North America. My colleague at Croakey, Associate Professor Lesley Russell, wrote more last week about the task ahead for President Biden and colleagues.

In India, after reaching a peak of nearly 100,000 COVID-19 cases a day by September 2020, infections and deaths have been steadily decreasing; daily cases have now fallen below 16,000.

India has recently started their vaccination program, aiming to vaccinate 300 million people by August with either the Oxford-AstraZeneca or the locally produced Covaxin vaccines, amid concerns about the use of Covaxin, which has not yet completed Phase III of its clinical trials.

Brazil’s response to the pandemic in 2020 was influenced by a President who downplayed the seriousness of the pandemic, and socioeconomic factors that limited the ability for the population to adhere to public health measures and access appropriate healthcare.

The health system in the Amazon city of Manaus has collapsed in recent weeks, oxygen supplies are running out, and the virus is spreading to remote communities that are often only accessible by plane or boat. The collapse of the health system in Manaus means that people in the remote communities who require critical care from COVID-19 and other conditions are unable to be referred to Manaus and are not receiving the healthcare they need.

Russia’s initial response to COVID-19 was helped by closing the Russian-Chinese border and a large testing program. However, cases soon skyrocketed as they were impacted by shortages in personal protective equipment and, as in Brazil and other countries, by leaders who downplayed the seriousness of the pandemic.

Recently, Russian officials admitted that the death toll from COVID-19 was three times higher than reported, and hospitals and morgues are overcrowded.

After struggling to control the virus for much of 2020, the United Kingdom has experienced an increase in COVID-19 cases since the beginning of December, largely as a result of a different strain of the SARS-CoV-2 virus that is estimated to be 70 percent more infectious than the previous strain. With the health system under enormous pressure, the UK is in lockdown and the vaccination program has ramped up.

As written in this editorial in The Lancet:

a lack of clear political leadership has become a common hallmark of countries that have suffered the most.”

Other countries in Europe have recently implemented new, or extended current, public health measures to manage rising cases and concerns about new variants of the virus, particularly the more infectious one in the UK.

On 20 January, the Netherlands Government announced a range of new measures, including a curfew, international travel restrictions and a ban on all flights from the UK; and Germany has extended their lockdown until the end of January and introduced new rules limiting travel in hot spot areas.

While experiencing outbreaks over the summer holiday period in Sydney, Victoria and Brisbane that resulted in more border closures and a three-day lockdown in Brisbane, Australia has overall responded well to the pandemic in contrast to other countries. By mid-January, the outbreaks had been brought under control. Minimal community transmission has been reported since.

Since my last COVID-19 wrap in December 2020, vaccine programs started in many countries, including Israel, United Arab Emirates, United Kingdom, Bahrain and the United States. It was announced today that the Therapeutic Goods Administration (TGA) had approved the use of the Pfizer vaccine in Australia.

He said: “There have been no delays in the introduction of the vaccine in Australia. There has been the necessary swiftness that has been asked of the TGA and, of course, the health officials that are driving this process. It is moving considerably faster than normal vaccination approval processes would occur in Australia, but without skipping a step, without cutting a corner, ensuring that everything that needs to be ticked is ticked along the way.”

5th – Under 18-year-olds, if recommended (if vaccine trials have proven efficacy etc)

The PM reiterated that while the vaccine will be very important in Australia’s fight against COVID-19, “vaccination is not a silver bullet,” and that COVID-safe practices must continue in 2021, until more is known about the vaccines’ long-term impact and effect on preventing infections of the virus.

The aim is for half of the Australian population to be vaccinated by July, with either the Pfizer mRNA or the Oxford/AstraZeneca vaccines. The Pfizer vaccine will be administered from hubs implemented in 30-50 hospitals across Australia, with priority for vaccination to be given to frontline healthcare workers, quarantine and border staff and residential aged care and disability workers and residents.

Both vaccines require two doses, with the second to be taken three to four weeks from the first dose.

While the Pfizer vaccine will be imported into Australia, the AstraZeneca vaccine will be manufactured in Australia, with the aim of ensuring a steady supply. The Pfizer vaccine has to be stored at -70 degrees Celsius, which poses a logistical challenge and one of the reasons why it is being administered from hospitals that have the capabilities for cold-chain storage. Concerns have recently been raised about delays in supply to some countries, including Canada.

Each state and territory will have their own vaccine rollout strategy to be delivered within the context of their own political and social climate.

Since the beginning of the year and in particular since the announcement of the national vaccine plan, much debate has occurred about the speed of the rollout, with some saying Australia cannot afford to wait for TGA approvals before beginning to and others saying we are in a unique position and can wait for official approvals to be processed.

Professor Julie Leask from the University of Sydney urged the Australian Government to “be more proactive and flexible in fast-moving situations like this, so people are well informed and empowered to act accordingly”.

Communication is going to be vital in the vaccine rollout. The Australian Government’s control over immunisation communication limits experts’ ability to communicate widely in public, which may mean that misinformation spreads.

It is also going to be important for communication and public health campaigns to be tailored for distinct audiences.

“The best vaccines won’t be of use if the public cannot or will not take them,” Leask wrote.

What others have said 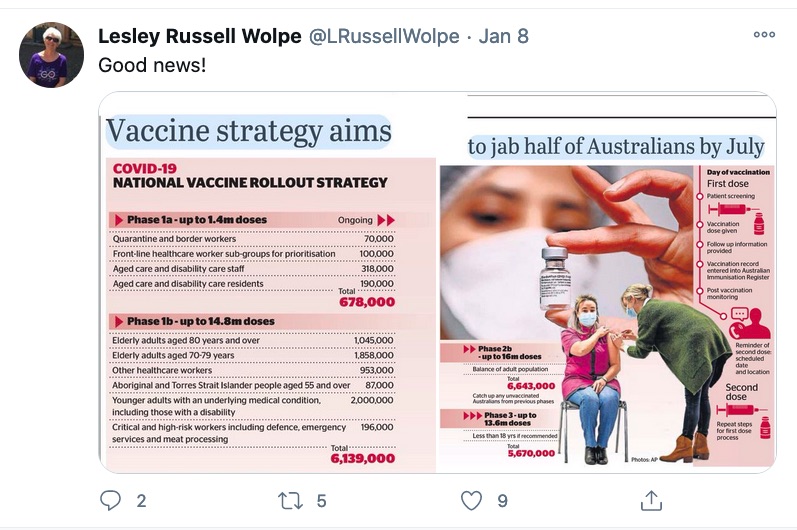 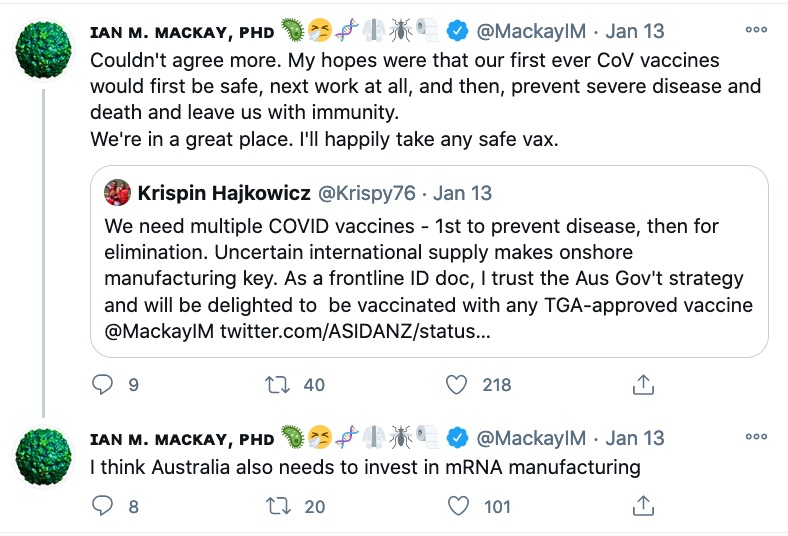 A joint statement by the Australian Society for Infectious Diseases (ASID), Public Health Association of Australia (PHAA) and Australasian College for Infection Prevention and Control (ACIPC) was released in support of the vaccine rollout.

As highlighted by Leask, Dr Tarun Weeramanthri, President of PHAA, and Dr Tedros, the World Health Organization’s director-general, the international vaccine rollout must be equitable. Wealthier countries like Australia need to play their role in ensuring that countries that are under-resourced receive the vaccine supply they require. “Until everyone is safe, no one is safe,” former President of Liberia, Ellen Johnson Sirleaf, said in a recent interview.

While the vaccines are an important tool in controlling the pandemic, until more knowledge is gained about the long-term impacts and how much they prevent virus transmission, it is important to remain vigilant on public health prevention measures (physical distancing, regular handwashing, testing if symptomatic or as guided by health officials), to prevent further outbreaks and potential burden on health systems.