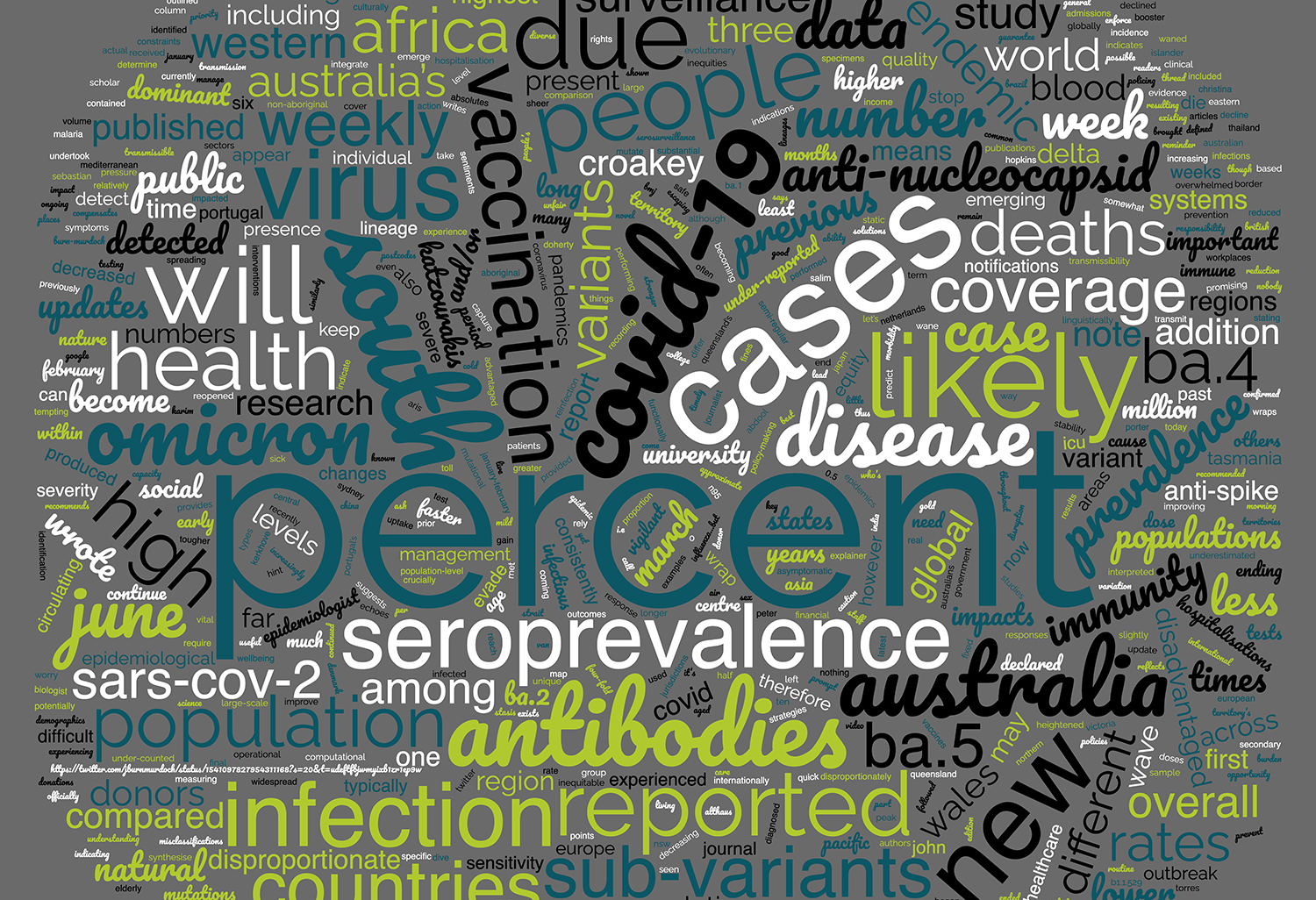 Wrapping up the COVID-19 wrap

Introduction by Croakey: In early 2020, we published the first edition of the COVID-19 wrap, with a focus on cruise ships, cases in children, and a statement by World Health Organization Director-General Dr Tedros Adhanom Ghebreyesus on the importance of solidarity.

Solidarity between countries and also between age groups was “the key to defeating COVID-19″, he said.

Since that first column, Alison Barrett has put in a massive probono effort, summarising research and publications likely to be of interest or use to our readers. In publishing her final column, we acknowledge her commitment and solidarity in providing this service.

This is the final edition of the COVID-19 wrap, a semi-regular column that began in March 2020 to synthesise research and updates about the novel coronavirus for Croakey readers.

Over the past two and a half years, 45 COVID-19 Wraps have been published. They brought updates on vaccinations, long COVID, public health and social measures, equity, human rights and global updates.

Over time, it’s become increasingly difficult to keep up with the volume of publications; a quick search for ‘COVID’ in Google Scholar this morning provided 712,000 results published since 2019.

Thus, due to time constraints making it difficult to maintain timely updates, I have decided to stop compiling the COVID-19 Wrap.

But, do not worry: Croakey, myself included, will continue to cover COVID-19 in our usual news coverage. The pandemic is not over.

When will the pandemic be over?

Nobody can predict when the COVID-19 pandemic will be over – it could be months or years from now.

While some countries, such as Denmark and the Netherlands, have “functionally declared” the pandemic has ended in their countries, the World Health Organization will officially declared the pandemic over when they determine certain criteria have been met, including case numbers and vaccination coverage.

As a reminder, epidemics, pandemics and endemic disease are defined based on their rate of spread. A pandemic is when a disease spreads internationally, across borders and regions, and is likely to require urgent international action.

As seen since the early months of 2020, pandemics typically cause widespread and large-scale social and economic disruption, in addition to direct impacts on health.

While an epidemic may be large, the spread is typically contained within one region.

A disease is endemic when it is “consistently present” and overall rates of disease remain relatively fixed. Malaria and the common cold are examples of endemic diseases.

While the SARS-CoV-2 virus is consistently present, the overall rates of disease are not static.

Professor Salim Abdool Karim, a clinical infectious diseases epidemiologist in South Africa, said in Science Journal, that although it is tempting to call the COVID-19 pandemic over, the real end will not come until there is a variant that is not better at spreading or escaping immunity than the previous variant.

Additionally, as outlined by evolutionary biologist Professor Aris Katzourakis in this Nature article, defining a disease as endemic does not mean it will stop making people sick or “guarantee stability”.

“Stating that an infection will become endemic says nothing about how long it might take to reach stasis, what the case rates, morbidity levels or death rates will be or, crucially, how much of a population – and which sectors – will be susceptible,” Katzourakis wrote.

On data, it is important to note that COVID-19 trends and research should be interpreted with a hint of caution. There are no absolutes, but there are indications – some are stronger than others.

For example, COVID-19 case numbers are likely under-counted and under-reported due to changes in testing strategies, resulting in an overall lower number of tests performed and cases detected.

Similarly, the actual death toll from COVID-19 is likely far higher than what is reported due to overwhelmed systems, misclassifications and different types of data management and recording systems.

As previously reported at Croakey, there is a vital need for ongoing equitable data surveillance and management to inform policy-making and prompt identification of new variants and changes to transmission.

In its latest epidemiological report (with data up to the week ending 19 June 2022), the World Health Organization (WHO) reported 536 million cases and 6.3 million deaths due COVID-19.

As per the John Hopkins University COVID-19 dashboard  today, confirmed cases have increased to 545 million.

In the report, the WHO wrote that “globally, the number of new weekly cases has continued to decline since the peak in January 2022”.

While it is promising that weekly cases of COVID-19 are trending down and this is likely in part due to increasing global vaccination coverage, it is also likely because some countries are performing less COVID-19 tests which mean less cases are being detected.

In the week up to 19 June, the number of new weekly cases increased in South East Asia by 46 percent on the previous week, Europe by six percent and the Eastern Mediterranean by 45 percent.

Overall new weekly cases decreased in the other three WHO regions (Americas, Western Pacific and Africa) – even though high case numbers were reported in some of the countries within these regions.

While the global number of weekly deaths decreased, they increased in the South East Asia region (particularly in Thailand, India and Indonesia).

In the Western Pacific Region, the highest number of new weekly deaths were reported in China, Australia and Japan.

The Omicron BA.4 and BA.5 sub-variants are likely to become the dominant sub-variants in Australia in coming weeks.

In the week to 12 June, the proportion of COVID-19 cases from the Omicron BA.2 sub-variant declined and the prevalence of BA.4 and BA.5 sub-variants increased.

Both BA.4 and BA.5 were first detected in January-February 2022 in South Africa, becoming the dominant variant there in May 2022.

At present, it does not appear that the BA.4 and BA.5 sub-variants are any different in severity to BA.2.

However, they do appear to be more transmissible and likely to “evade immune protection against infection induced by prior infection and/or vaccination, particularly if this has waned over time”, according to the European Centre for Disease Prevention and Control (ECDC).

The impact of BA.4 and BA.5 will differ between countries depending on, among other factors, vaccination rates and population demographics.

For example, BA.4 and BA.5 has been dominant in South Africa and Portugal. South Africa experienced similar hospitalisation rates and slightly lower deaths than during the first Omicron wave.

In contrast, Portugal – where vaccination coverage is high – is currently experiencing similar levels of both hospitalisations and deaths as during the Omicron wave, potentially due to Portugal’s more elderly population, according to computational epidemiologist Dr Christian Althaus in Nature journal.

This Twitter thread by data journalist for the Financial Times, John Burn-Murdoch, provides some insights into Omicron sub-variants in South Africa, US and Europe. 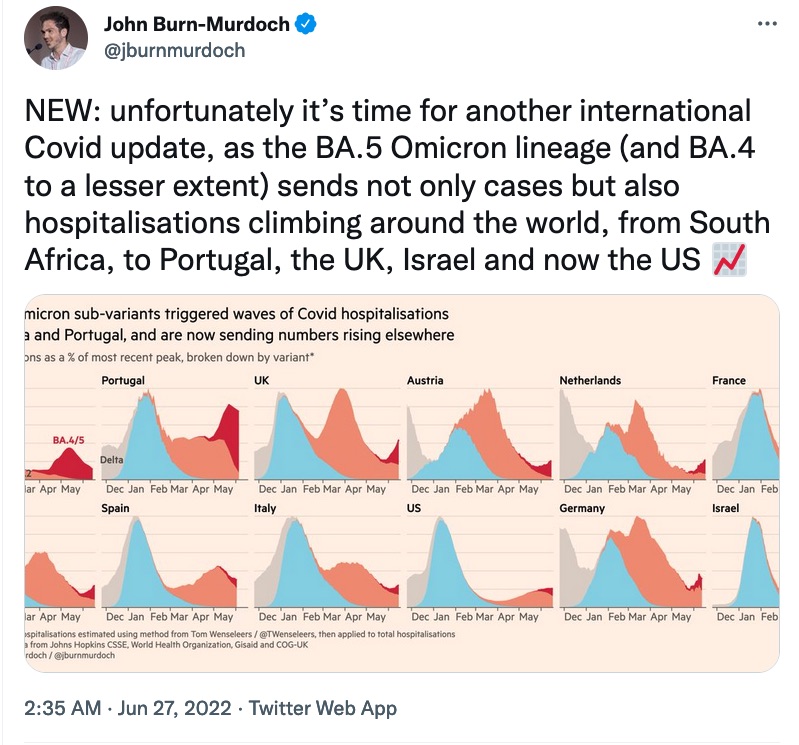 Professor Christina Pagel recently wrote in The BMJ, “while Omicron might be somewhat less severe than Delta, and people have higher immunity through vaccination and previous infection, it is not mild. At a population level, its sheer transmissibility more than compensates for any reduction in experienced disease severity or symptoms for the individual.”

The professor of operational research at University College London said the British population will have some immunity from cases in the previous Omicron wave, but booster doses are waning.

A high number of cases disrupts workplaces, including healthcare systems, and places further pressure on primary and secondary care.

Pagel recommended that good quality masks (i.e. N95) are required in healthcare to keep staff and patients safe and that now is an opportunity to improve indoor air quality.

Additionally, she wrote “in the longer term, however, we need solutions that do not rely so much on individual behaviours”.

The ECDC recommends improving uptake of vaccine boosters, in addition to “vigilant” surveillance of data on cases, hospitalisations, ICU admissions and deaths. 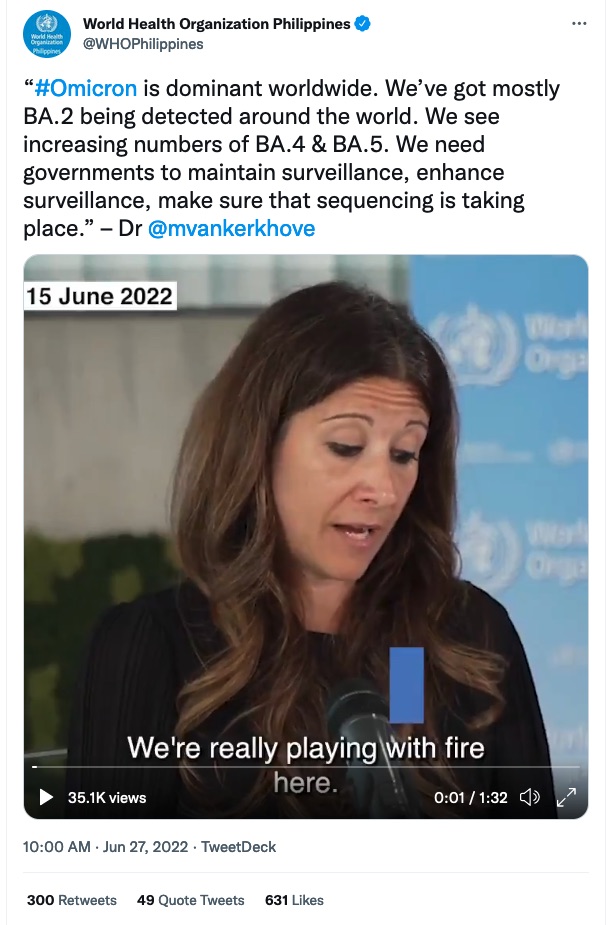 This is a useful explainer about virus variants by Dr Sebastian Duchene and Ash Porter from the Peter Doherty Institute for Infection and Immunity.

A few key points from the article:

Due to under-reporting of COVID-19 infections in Australia, researchers at the Kirby Institute undertook a seroprevalence study to gain a better understanding of the population-level incidence of SARS-CoV-2.

Seroprevalence studies, or serosurveillance, are used to provide approximate levels of antibodies against infectious disease and are “considered the gold standard for measuring population immunity due to past infection or vaccination”, according to Australia’s National Centre for Immunisation Research and Surveillance.

The study, which examined blood donor specimens from 5,185 blood donations between 23 February and 3 March 2022, found that 17 percent of Australians had presence of anti-nucleocapsid antibodies, from natural infection of the SARS-CoV-2 virus.

Queensland had the highest seroprevalence of the virus (26 percent), followed by Victoria (23 percent) and New South Wales (21 percent).

The presence of anti-nucleocapsid antibodies was highest among donors aged 18 to 29 years, with a prevalence of 27 percent.

In comparison, cumulative case notifications during the same period are far lower across all jurisdictions.

It is expected that seroprevalence is higher than cumulative case notifications “as routine surveillance does not capture all people infected with SARS-CoV-2 because some are asymptomatic, not diagnosed, or not reported”, the Kirby Institute writes.

The study detected that the prevalence of anti-spike antibodies was 98 percent, with little variation across jurisdiction, sex or age group, indicating very high vaccination coverage.

Therefore, the high prevalence of anti-spike antibodies likely reflects high vaccine coverage among the study participants in addition to natural infection among donors who were not vaccinated.

The authors note that blood donors may be more likely to be vaccinated than the general population.

It is important to note that anti-nucleocapsid antibodies are produced less and wane faster in people who are vaccinated than those who are not.

Therefore, the 17 percent seroprevalence is likely to be underestimated. 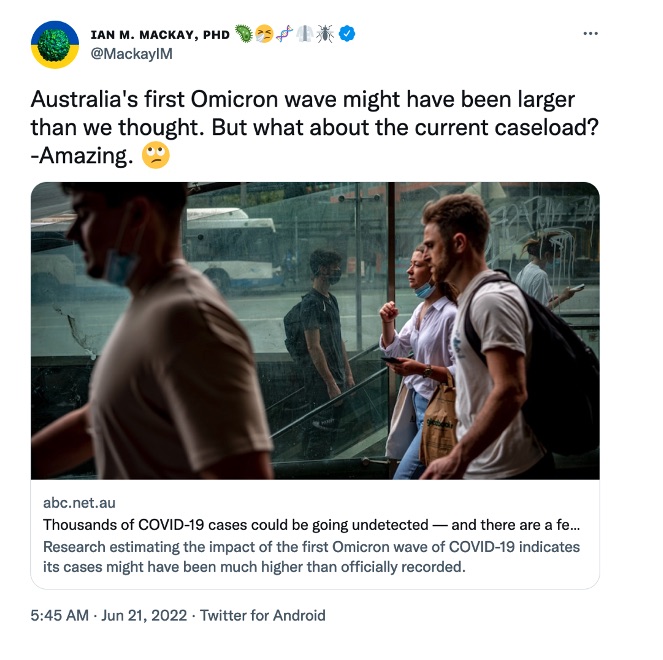 The pandemic has heightened existing inequities throughout the world, and disproportionately impacted some populations more than others.

Aboriginal and Torres Strait Islander people are two to three times more likely to be admitted to ICU or die due to COVID-19 than non-Aboriginal people of the same age.

The disproportionate impacts are not limited to people’s health, but social and economic wellbeing also.

Croakey has published several articles about the disproportionate impacts on priority populations. Here is a sample of some:

In addition, vaccine inequity exists. As at 28 June, 79.5 percent of populations in high income countries have received at least one dose of a COVID-19 vaccine, compared with 17.3 percent of low-income countries.

As shown in the world map below, many countries in central Africa have yet to administer one vaccine dose to ten percent of their population. 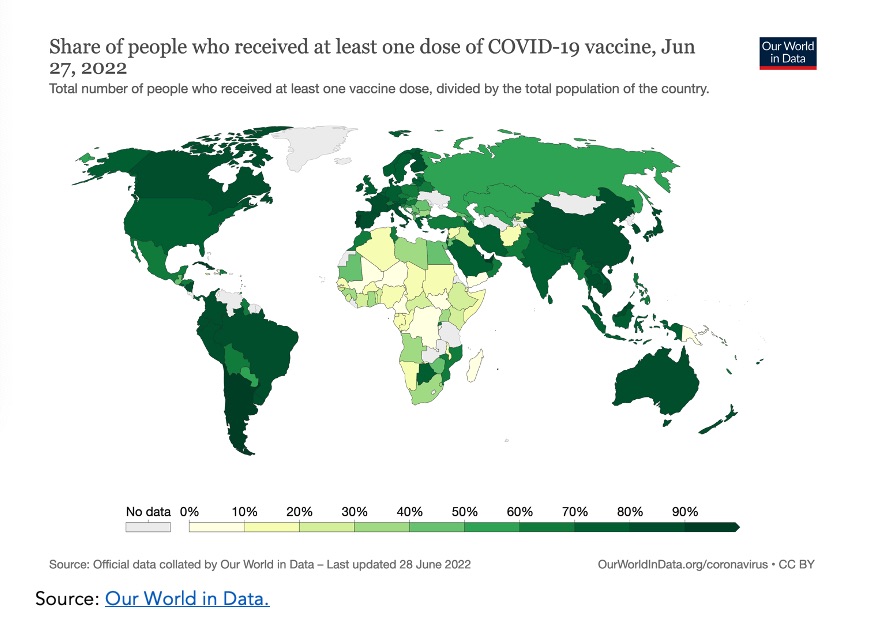 Source: Our World in Data.

This concludes the final COVID-19 Wrap. Please feel free to stay in touch on Twitter (@alisonsbarrett) and share useful research and resources.

A thread by virologist Dr Ian Mackay on the use of masks for preventing transmission. 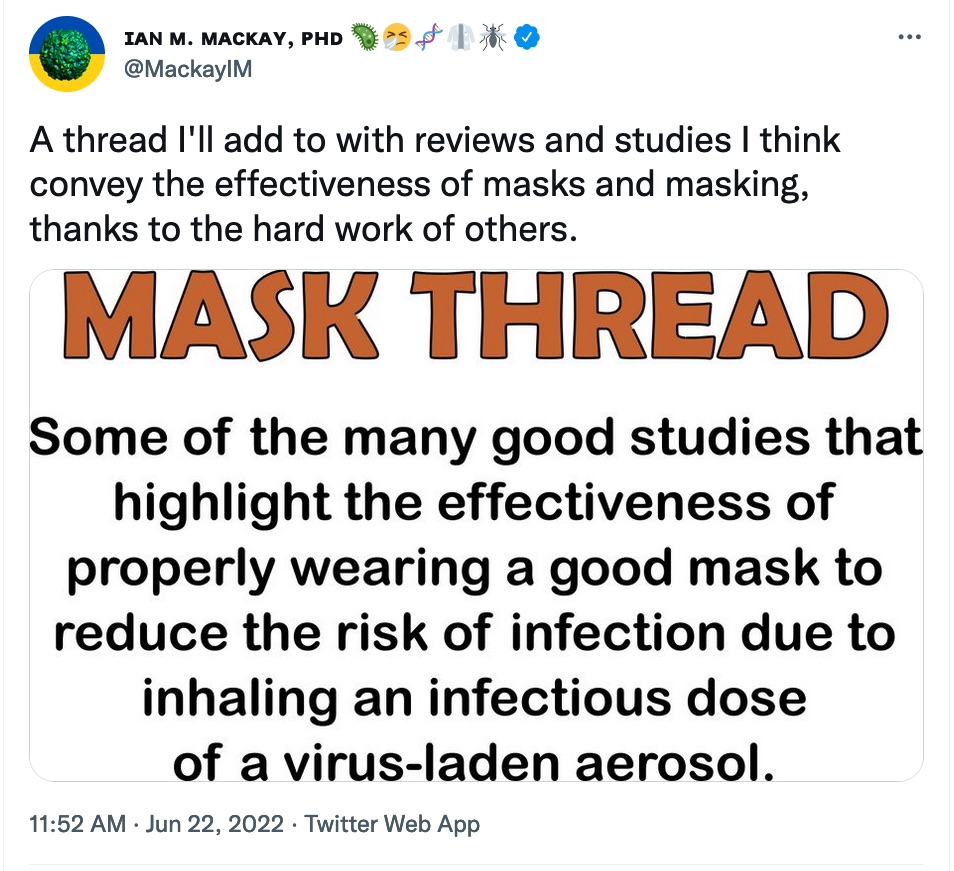 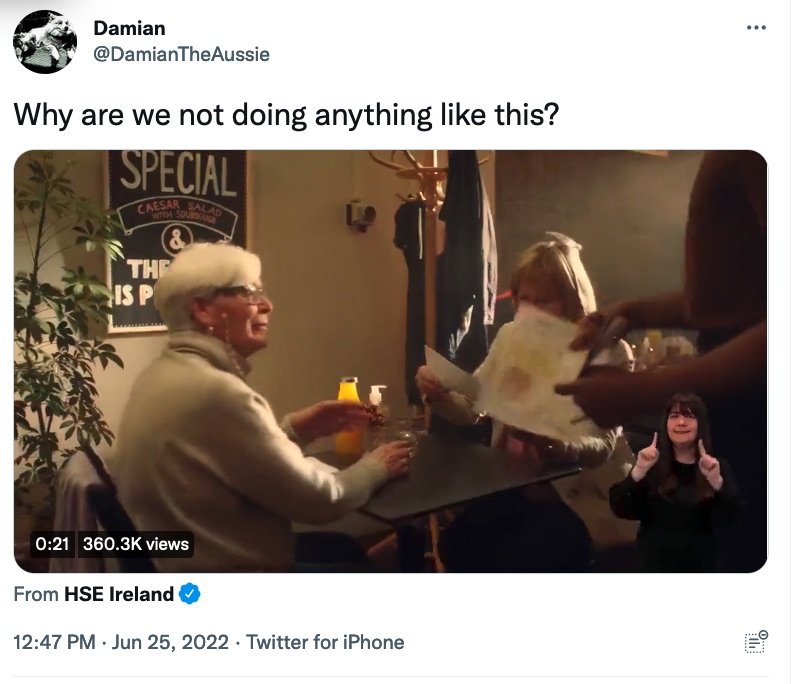 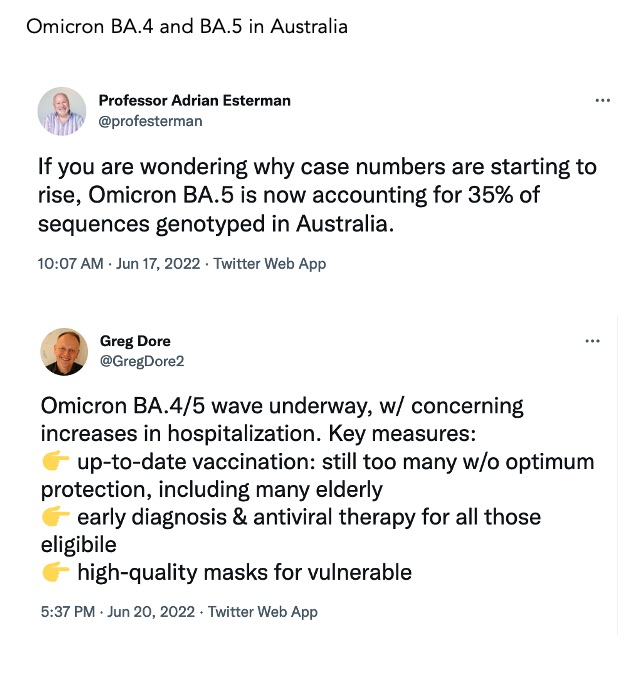 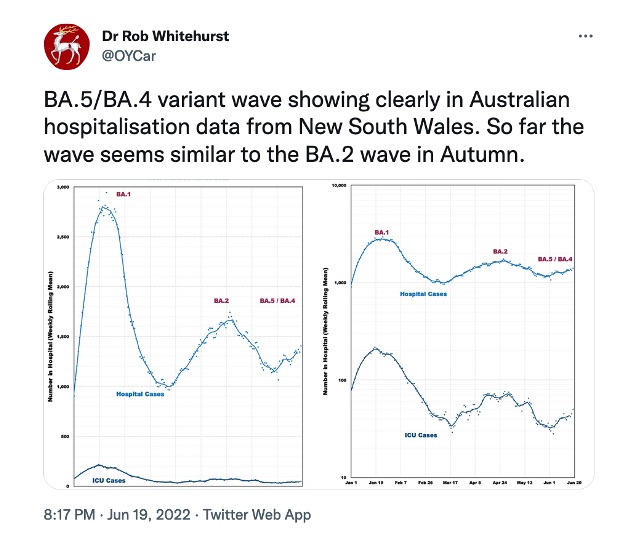 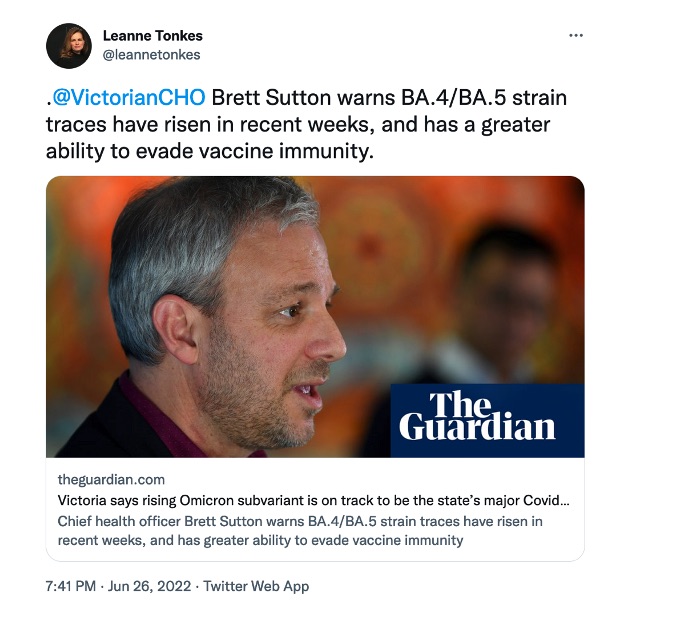 A thread by Professor Alex Martiniuk on the impact on health services and workforce. 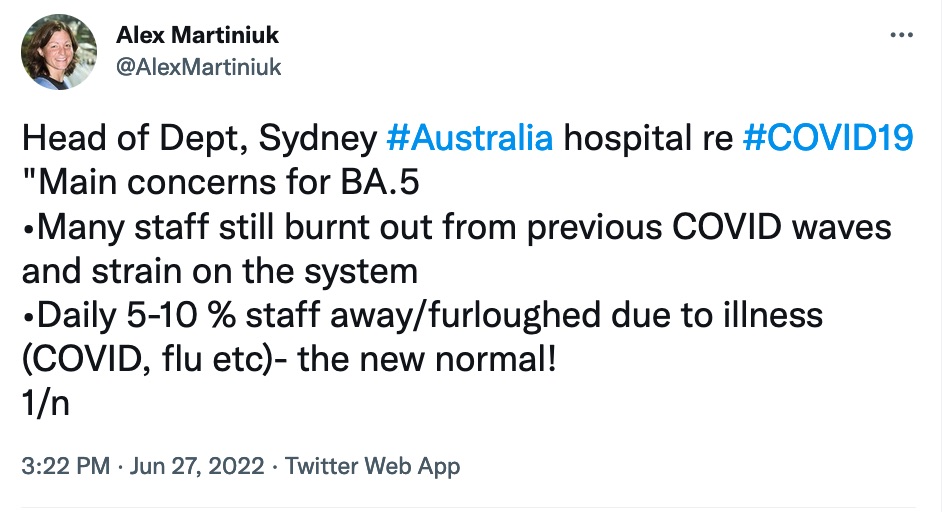 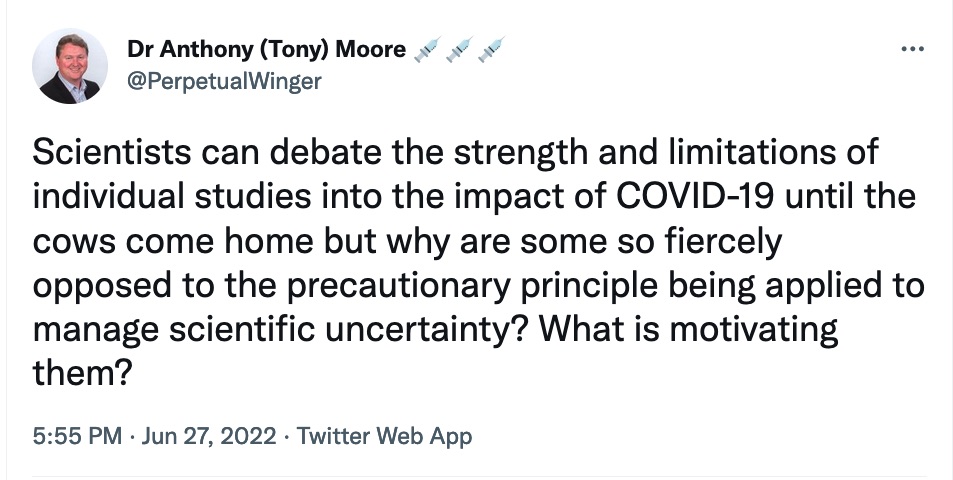 Long COVID has featured in many editions of the COVID-19 wrap. 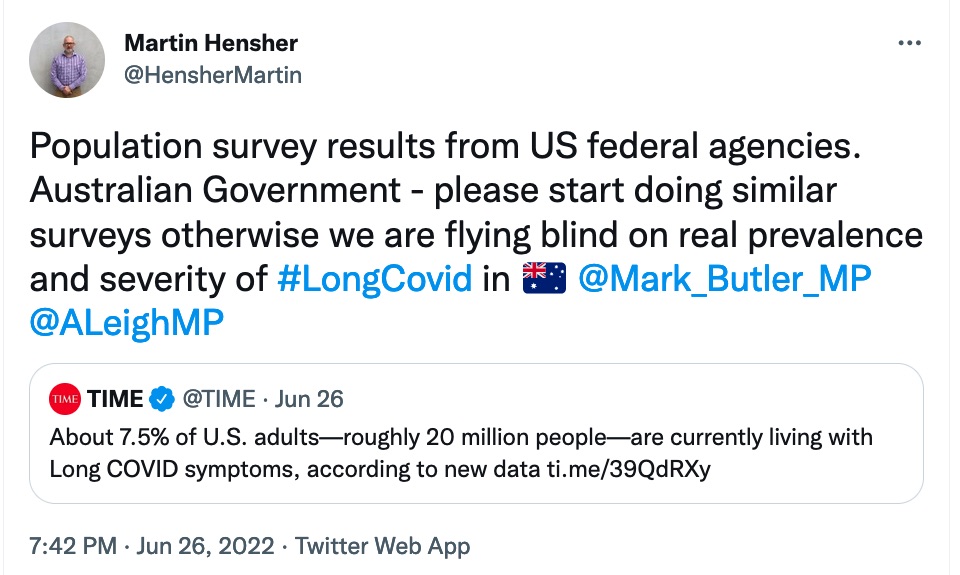 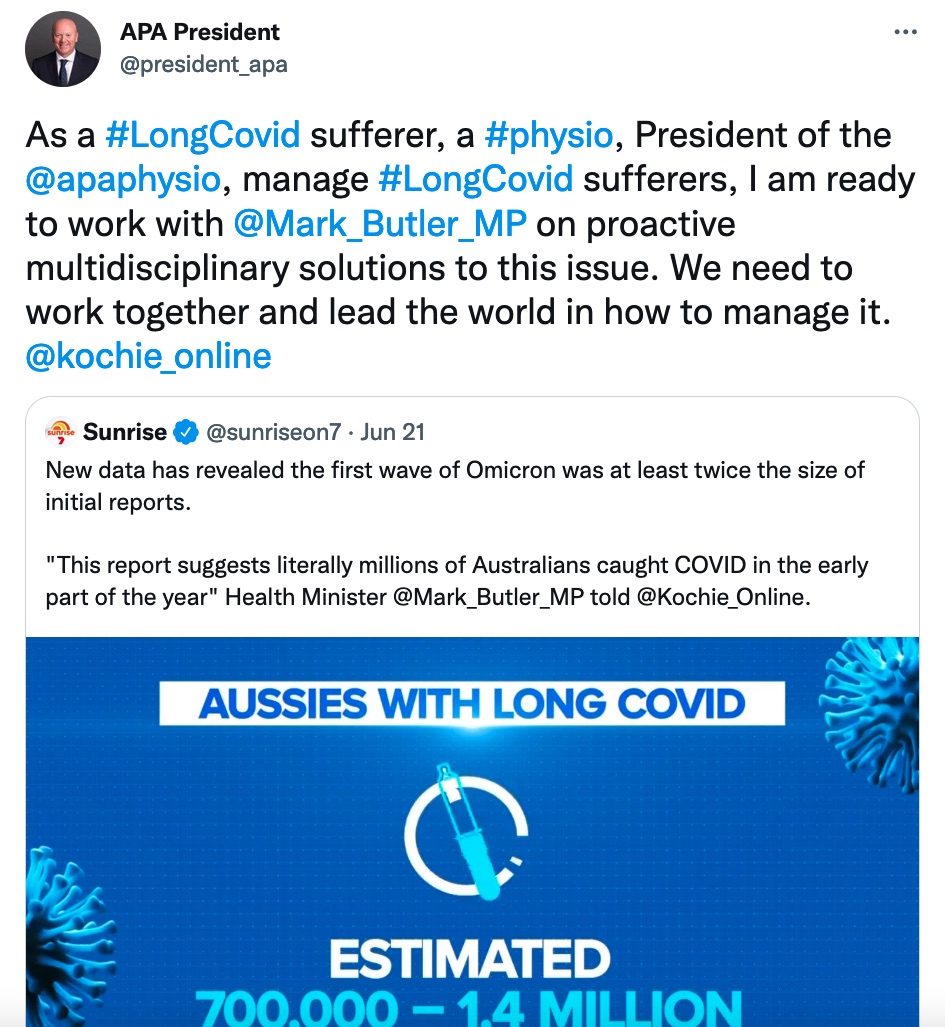 PrevPreviousLore, law and cultural authority at the heart of Victorian Treaty Authority
NextPost Roe, women in America are right to be concerned about digital surveillance – and it’s not just period-tracking appsNext